And you have the most awesome kitten room. Where do you shop for them?

Thank you! I shop for them everywhere – online, in stores (Target, Home Goods, Marshalls and TJ Maxx are favorites) – basically, every store I walk into, when I see something I like, my first thought is always “Can I use this for the kittens?”

help me collective! I got a new (to me) sofa this weekend and my cat (Felix) thinks it is going to be the BEST scratching post ever! I’ve currently got foil taped all around the corners, but needless to say – that’s kinda ugly…. What do y’all suggest for a longterm solution?

I absolutely agree with what Jess and April-Dawn said (you can see those comments here) – have a variety of scratchers nearby, redirect him to the scratchers if you see him going after the couch, and keep the couch covered, at least for the short term. 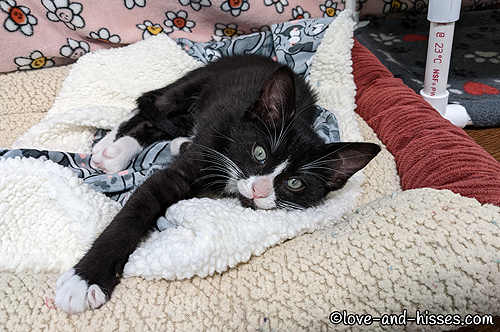 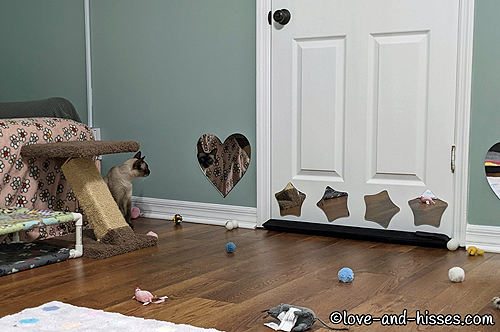 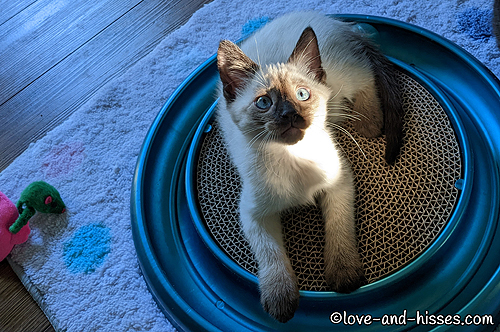 Lalo on the scratcher/track toy, in the sun. 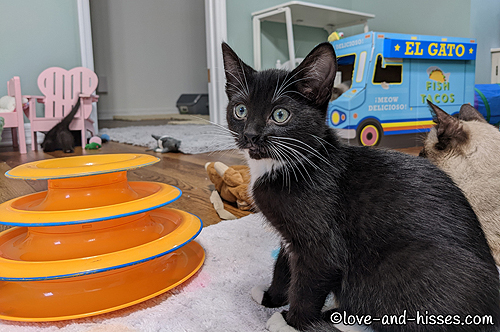 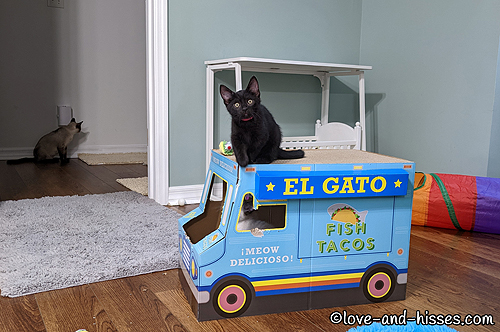 Francesca thinks the taco truck is tastier than the tacos. 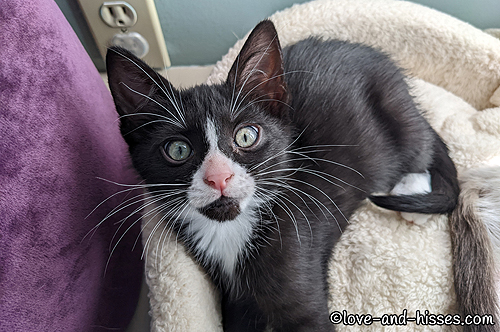 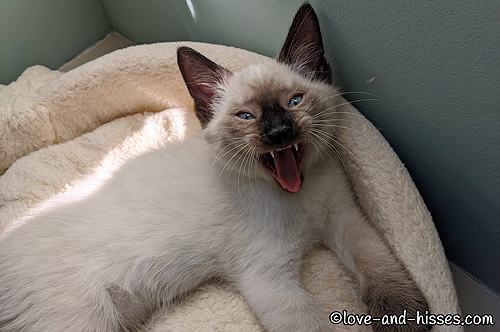 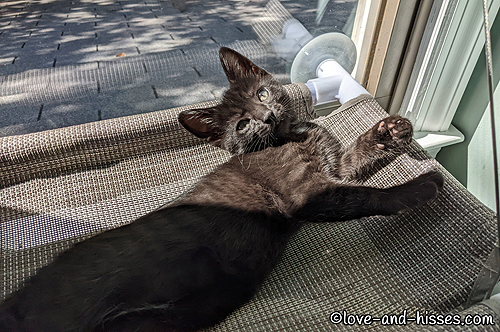 Mike in the sun, showing off his hidden stripes. 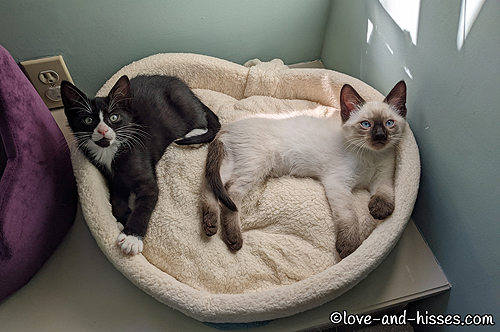 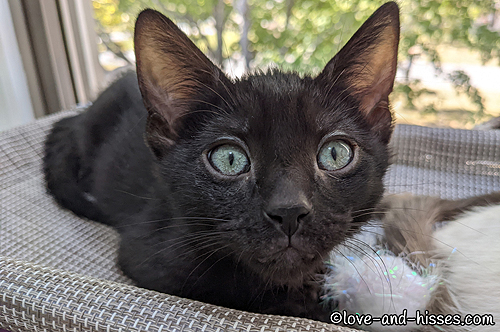 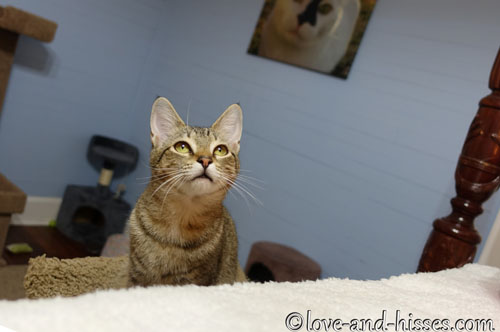 An old shot of Dewey (with that picture of Tubby on the wall in the background, awww) so y’all don’t forget what a pretty, pretty boy he is. 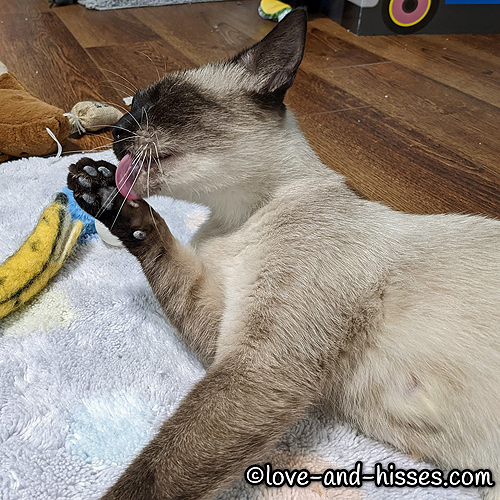 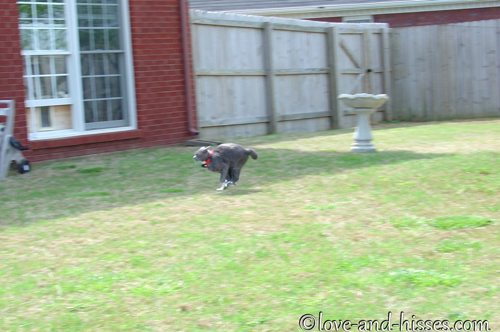 Throw Back Thursday: in 2005, I caught this shot of our permanent resident Mister Boogers in motion. (Mister Boogers had a small nub of a tail and what he lacked in tail he more than made up for in personality. He was the BEST.)

YouTube link
Doesn’t it figure that the smallest and youngest one of the bunch was the first one to figure out how to get up high and do some nosing around? 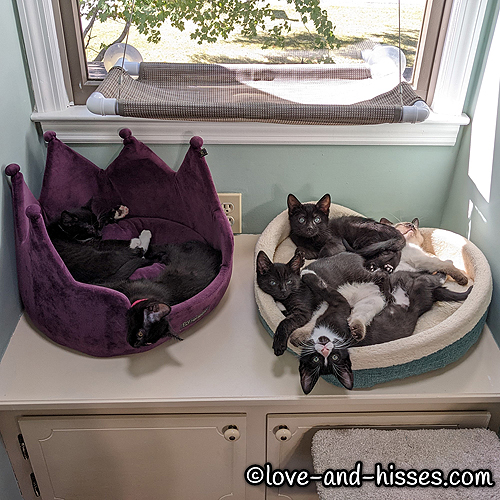 It seems like a good time to take a nap, apparently. That’s Nacho and Francesca in the purple crown bed, and the boys in the other bed (from front: Saul, Mike, Gus, and Lalo flopped across the middle of the bed with his feet at the front and his head at the back.)

YouTube link
Permanent resident Archie keeps us safe from the dish towels. Those things can be wily, so you can imagine how much I appreciate his vigilance! (Bonus: Archie from 2016, telling me how he is DYING OF STARVATION. His voice cracks me up.) 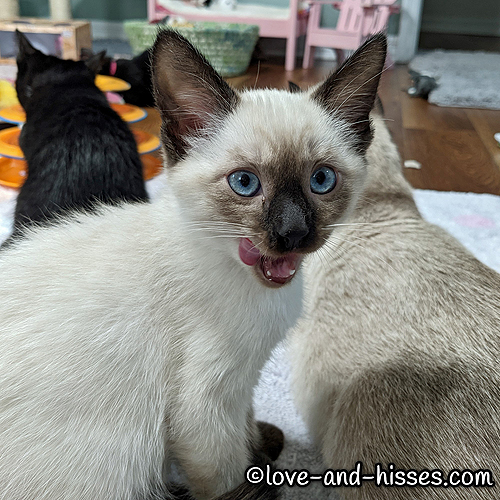 That’s right, #Thlurrrrpsday is still going on, and Lalo shows off his skills. 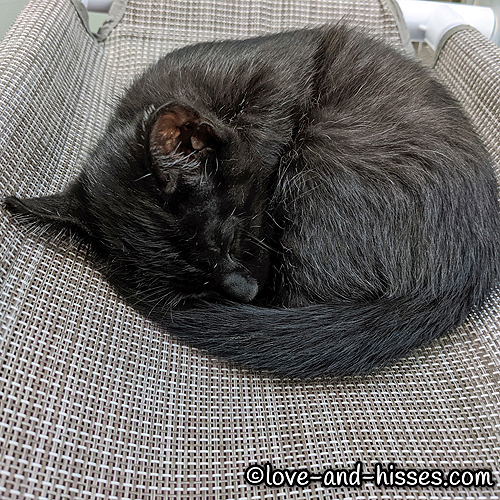