If that blanket said “Cats are my favorite people” I totally agree. Present company excepted, that is. 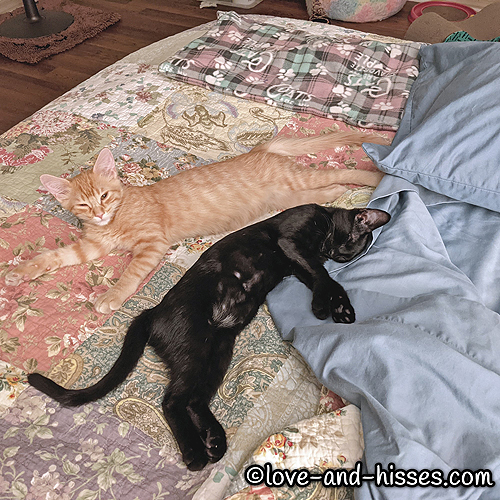 That blanket in the corner of the bed does indeed say “Cats are my favorite people”!

How are Molly and the kids at Petsmart? Still can’t understand why they haven’t been snatched up yet, they are soooo cute!

Any updates on Molly and the boys? I’m sure hoping for good adoption news! Thanks.

I don’t know what’s taking so long for Molly, Alfie and Christopher’s people to come along (there’s an adoption application on Franco Fondue, so hopefully he will get to go home soon.) They’re doing well at Petsmart, according to the volunteers, though Molly mostly wants nothing to do with her kittens. The boys are having a good time playing like crazy, though!

We can hope! I suspect that they’re going to suddenly change color, but if they stayed blue I certainly wouldn’t be heartbroken!

I wonder, Robyn, if you are able to get stats on how many hits you have gotten on the Alice Mo The Calico song over the years. I know I have hit the play button every time her picture pops up!

Besides getting to look at lovely kitties, you have that nice Halloween couch cover/throw. Where is that from? 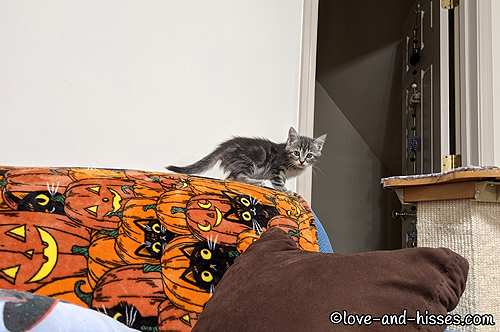 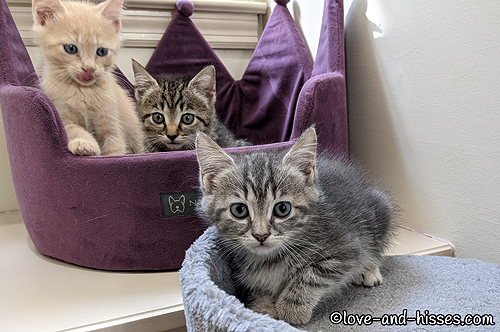 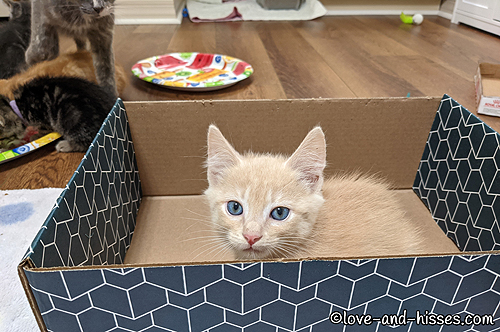 Sammy’s hanging out in this box while his dinner digests. 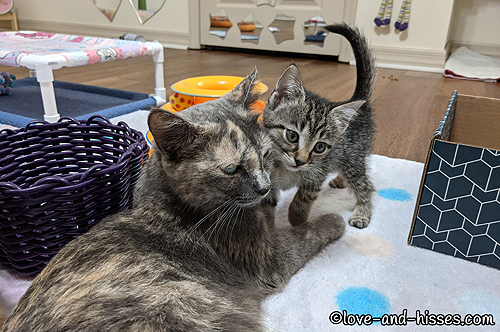 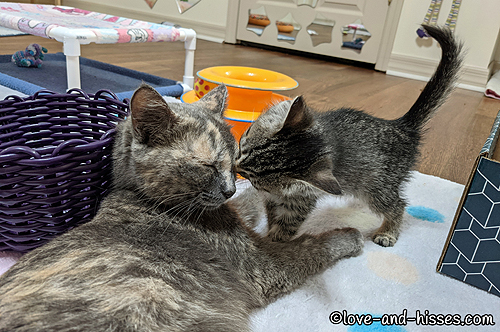 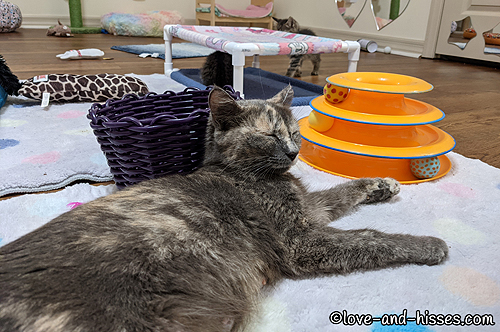 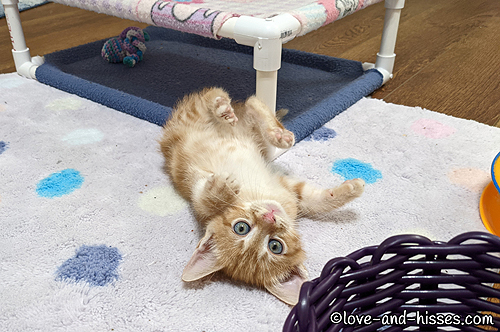 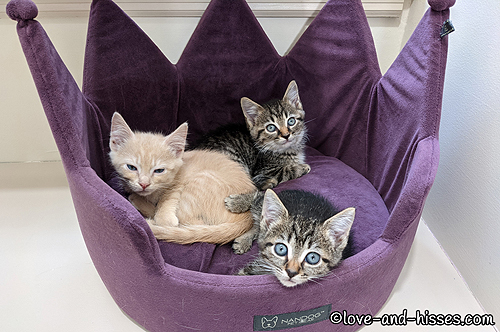 I love how Barry (in the back) is smiling, Sammy looks skeptical, and Nikki is all eyeballs. 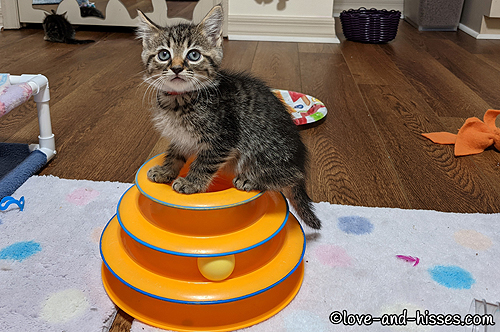 Barry’s all “This is how you use this, right?” 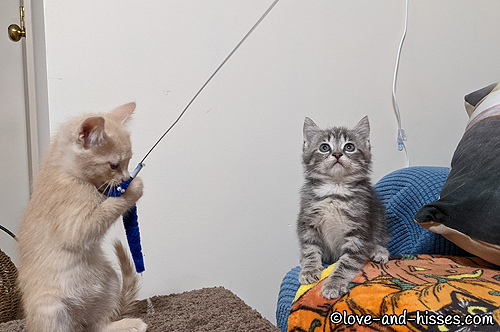 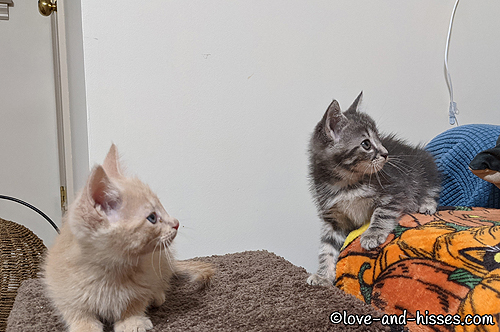 I’m just glad to see that I’m not the only one who gets the suspicious eyes from Carli – she and Sammy were looking at Fred.

Someone asked whether Maddy is letting the kittens nurse or if she has cut them off. She does let them nurse, but never when I’m in the room – if they’re nursing and I walk into the room, she gets up and runs over to me. She’s far more interested in being petted and just hanging out near me than letting them nurse. I’m not sure how much milk they’re actually getting – her milk sacs don’t ever appear to be very full; they might mostly be comfort nursing at this point. 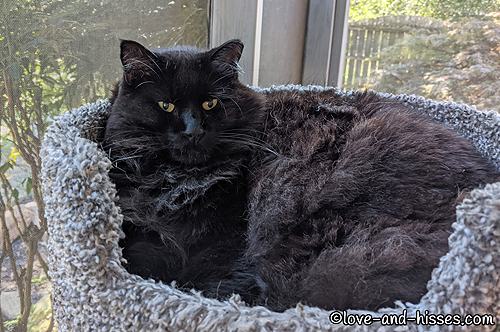 Khal does not miss Sofia and Theo one tiny bit! 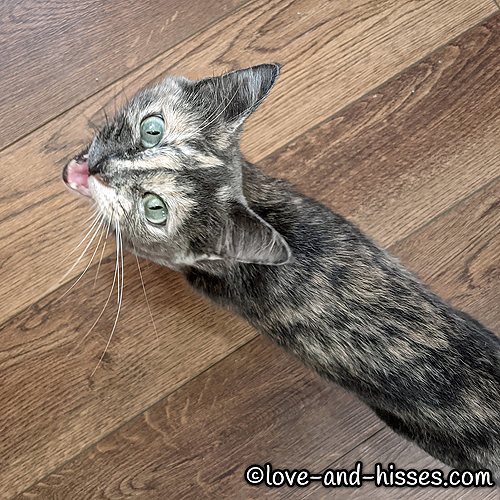 Mama Maddy is a talker, in case you wondered (and yes, I am working on getting a good video of her talking.) 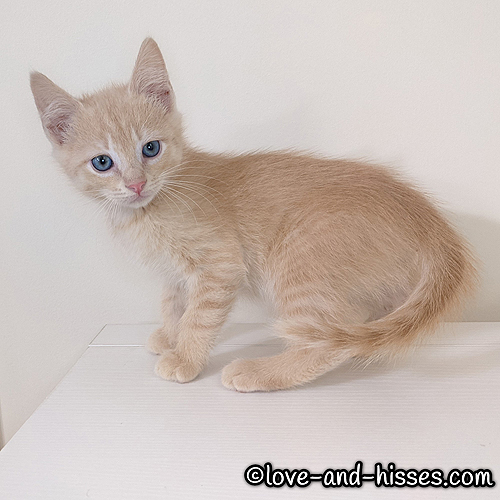 Sammy’s all “Pardon me, Madame, I don’t care for your tone.” 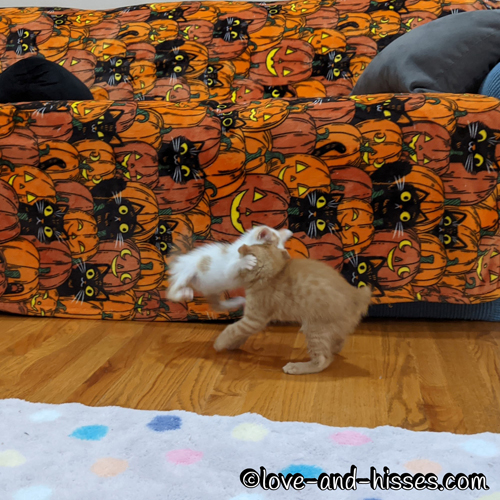 Throw Back Thursday: this picture of Wild Bill Hickok (white and orange) and Funnel Cake makes me laugh and laugh. (They were from one year ago, from the “Vittles” litter.)

YouTube link
Sofia Soy Sauce and Theo Pesto were adopted and went home yesterday. Here’s the video where you can watch them grow from tiny little baby fuzzballs to long and leggy teenagers. 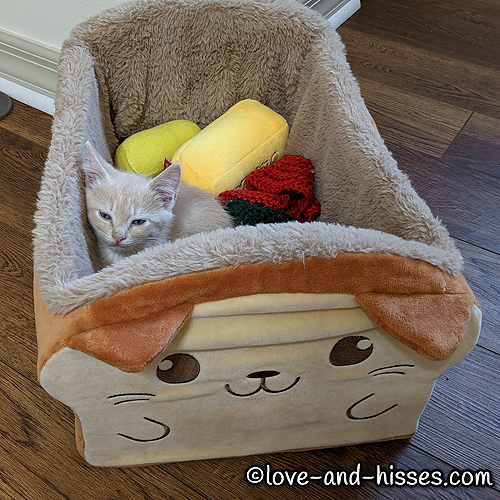