Throw Back Thursday: The Box.

I’m sure I recently mentioned this, but years ago, Fred built this box with his own two hands. 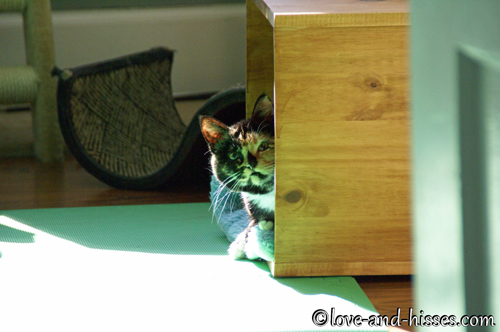 In February of 2011, Miz Poo thought it was awesome.

Then Emmy gave birth in that box, and raised her kittens there until they could toddle out on their own. I had to tape a strip of cardboard across the front so she’d stop pushing the bedding out of the box. And now, all these years later, that box is sitting in the back living room. We put it there to serve as a step up to the bay window (which is where the cat doors are), but once I put some beds in it, Archie claimed it as his own. Well, your thoughts and prayers regarding the closet-painting were much appreciated and yet DID NOTHIN’ FOR ME. We chose a can of paint from the cans left behind by the previous owners – and there were a lot – and while the dab of dried paint on the top looked very nice, in actuality: Now, you might be saying to me “Robyn,” you are saying, “You are going to put litter boxes in that closet. If it’s the color of poop ALREADY, then you won’t have to worry so much about cleaning it.”

(Except that I know you are saying no such thing because that would be so very gross.)

Now, what I COULD have done is finish up that closet in that awful color, and then spent the next five to ten years thinking, every time I glanced into it, “Wow. I really hate the color of that closet so very, very much. What a terrible, stupid closet.”

What I’m going to do is accompany Fred on his trip to Lowe’s this afternoon, whereupon we will choose a light silvery-gray paint – the good paint, that covers in one coat – and then I’ll be painting that stupid closet this weekend.

If you can bring yourself to look at that closet picture again, please note that I am having to paint AROUND those stupid closet shelf support things. I thought about removing them, painting the walls, and then having Fred put them back up, but they’re mounted using drywall screws, and pulling those out is a nightmare and a half.

So that’s the state of the foster room closet. In case you were wondering. Hanging out in my room with Newt and the Sheriff. “I’ve done nothing wrong, but she still scares me.” I’m fully aware that I’m supposed to hate chipmunks because they’re rodents and can do so much damage, etc, but GOOD LORD THEY ARE CUTE. There’s been a lot of Frankie-and-Newt bonding going on lately, which is something I never expected to see. Stefan nearly blends in to that butcher block counter top, doesn’t he?