I moved this box out of the kitten room while I was doing some organizing, and Archie climbed right in and went to sleep.

That box is one that Fred made years ago, and which moved in and out of the foster room on a regular basis. Back in 2012, Emmy gave birth in it, and kept her kittens (Darwin, Logie, Newbery and Razzie) in there until they were ready to leave the box on their own. 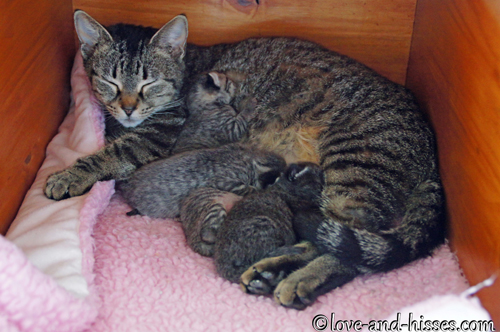 You can’t tell from this picture, but the box was literally in the middle of the floor. Why she opted to give birth here instead of in the crate over in the corner of the room is still beyond me. 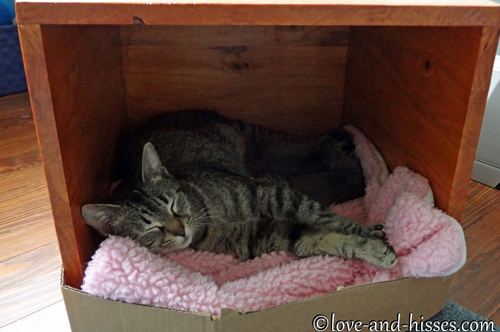 I had to tape a piece of cardboard across the front because she kept pushing the bed out of the box and watching those kittens try to move around on the hard, cold wood drove me crazy. (Sound familiar?) 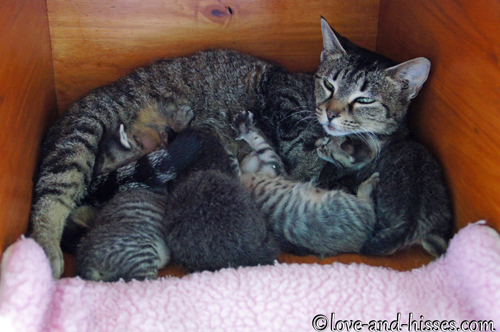 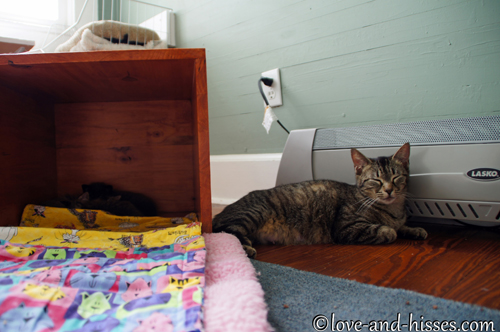 Emmy was too feral to go to Petsmart, so she went to live in a barn with other feral kitties, where she wasn’t harassed by humans who wanted to kiss and pet her. Her kittens were all adopted out, though it took until she was 6 months old for Razzie’s people to find her.

Here’s a video of Emmy’s kittens – the Nominees – when they were about 5 weeks old. Razzie is the one with the tiny little pouf of a tail running around. The best part of this video is 55 seconds in, when Newbery (I think it was Newbery, it might have been Darwin) goes sliding into the mouse track toy. Khal keeps a wary eye on me. I JUST WANT TO LOVE YOU, KHAL. Newt, hanging out in the cubby behind the sink. Also keeping a wary eye on me.

My sister sent me a couple of catnip kickers from Forgotten Felines of Maine. I tossed them on the floor, and over the course of 15 minutes got video of Archie and Dewey bunny-kicking it, and Khal giving it the ol’ snifferoo. Note in the first section, Stefan is snoopervising from a safe distance.