Emmy and the Noms. Darwin is a girl. Logie is a girl. Newbery is a boy. Razzie is a girl.

Emmy came to us, very pregnant, on February 17, 2012. She was one of a group of around 40 cats who were abandoned at a house in Limestone County, Alabama. Forgotten Felines spearheaded the rescue of these cats, and Emmy became a Challenger’s House cat.

Very very nervous and scared, Emmy made progress to the point where she’d allow limited petting and chin-scratching, but once her kittens were weaned, she reverted to her feral mindset. She never minded us handling her kittens, though she did keep a wary eye on us the entire time.  Her kittens were all named after awards, and thus the reason they’re referred to as “The Nominees” or “The Noms” collectively.

See all the pictures I’ve taken of Emmy and her kittens over at Flickr or scroll through them at the bottom of the page.

On May 24, 2012, Emmy went to her new home. We were never able to tame her, and it was decided that she’d be best off in a barn where she’d be cared for, but wouldn’t be required to have any more human interaction than she wanted. She’ll have other cats to keep her company, and will be watched over by a wonderful caretaker.

Edited to add: As of July 30th, Darwin, Logie, and Newbery have all been adopted. Razzie is currently waiting at Petsmart for her forever home!

Edited to add: On September 1st – her 6-month birthday! – Razzie went to her forever home. 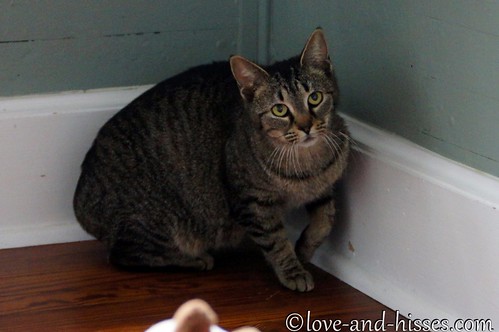