While I remember the Maura story, I clicked the link so I could chuckle over it again. And what did I see at the top of the page? BABY CORBIE! I forgot how he used to look. And while he is a beautiful cat, he was an abso-stinking-lutely GORGEOUS kitten. You are for sure not going to get any argument from me! He was a stunning little guy, wasn’t he?

Speaking of hissing around, that’s going on here following an all-day absence of one cat, Ellie, at the vet’s getting dental work done–cleaning, some extractions (and she’s only 3 years old, but it would seem that’s when this stuff starts…UGH). The other cat, pretty close to the same age, seemed to enjoy being an only cat for the day, and since Ellie’s return has been nasty to her, hissing, growling. Even this morning it is still going on…hoping that as Ellie starts smelling more like herself (to Lizzy–she doesn’t smell to us humans!) and less like vet/stranger this will die down. She was friendly to and played with Ellie prior to this altho she treated the late Mabel like dirt…hoping it’s not a mental block that won’t change. Has this happened with anyone else, and what was the outcome? Kind of wishing I’d scheduled them both the same day!

I think that after a few days, Lizzy will calm down and remember that Ellie’s her friend. But if anyone has suggestions on how to speed up that process, please chime in!

Lilybet is almost as pretty as my Harley! Do all torties have one light paw? Harley’s left front is tan, too. And I’m glad I’m not the only one doubting Lilybet’s pregnancy!

The only other tortie I have in the house at the moment (Miz Poo) has two white paws, so I’m going to say that no, not all torties have one light paw and one dark. (Though I’ve had plenty of tortie fosters, and it’s driving me a tiny bit nuts that I can’t think of who might have had one light and one dark paw!) I love that Lilybet has a “dark” side and a “light” side, though.

Robyn-as someone who is new to cats and kitties and the whole feline reproductive system, could you give us a little background into it? What is a cats general gestation? How do you know when they are pregnant, or even ready to be? What is the average litter size? Thanks.

A cat’s gestation period is 58 – 67 days, with 64 days being the average, at least according to Wikipedia.

I’ve read somewhere that cats can start going into heat as young as six months, but it can also happen earlier. Since Kara, Maggie, and Brandywine all went into heat before I had them spayed, I can tell you this – if you’ve got a cat in heat, you’ll know it. If she’s suddenly super friendly and raises her back end into the air every time you touch her, get her to a vet ASAP!

Re: Black cats – This was just posted on Dog Shaming.

I have wanted to share something with the L&H community for a while – the Stimulo feeding station by Aikiou. It took my two a bit of time to get the hang of it but now it’s the only place they can get their dried food from and they have become quite good at it. I originally bought it more as an enrichment type of thing to make mealtimes a bit more interesting (plus I’m a sucker for anything marketed for cats) but a very welcome side effect has been that Abby, who used to more often than not immediately puke up dried food after eating it (because she ate it so fast – she is like a vacuum that cat) has been stopped from eating so quickly, and miraculously the puking has stopped. Well it has almost stopped I think… I can’t be certain that she did the one I found the other day. One of the problems with having two cats!

Just thought I would share in case there are any cat mamas and papas out there who want to give their kitties some enrichment and/or have a bit of a puking problem on their hands.

Thanks for listening, and sorry for those of you with sensitive stomachs!

Thanks for the suggestion! I’ve thought of getting something like that for Jake. He’ll Hoover* up anything you put down for him; he’s not overweight, but I think something that feeding station might slow him down and keep him a little more interested.

*Typing “Hoover” reminded me that as I was looking through my folder of cat names, I found an email I sent to myself with the names Doover, Hoover, and Cooper. I have no idea where that came from (or what I’d call the litter as a whole), but it made me laugh.

So before Christmas I took in a small female cat. She’s good cat overall but doesn’t really know how to be loved. She’s good with me, lets me pick her up and the like, but several of my cats pick on her. And the problem is when they pick on her, she corners herself and howls like the dickens – sounds like she’s dying. If any of the cats get near her when she’s awake she growls at them. I know she got attacked by another cat before I brought her inside because she had an abscess. I have some calming stuff you add to their water which I might try, but might anyone else have any suggestions if that doesn’t work. I’ve never had this problem with the others, even my Ginger who is still semi feral and won’t let me near him gets along fine with the other cats.

Oldcat said: Feliway is supposed to be good at calming cats, although I’ve had issues with it here. Another thing to try is to make sure she has a safe way out or up so she can’t get cornered. This seems to help the nervous types, and keeps the other cats away from the eye to eye fight.

I agree with Oldcat – if she has an escape route to get away from the other cats, she’ll probably use it. I’d also give Feliway a try, and also maybe Rescue Remedy.

If anyone out there has other suggestions, please feel free to share!

I got pictures of Sungold (Sunny) and Mr. Stripey from Lynn! They certainly look happy in their forever home, don’t they? 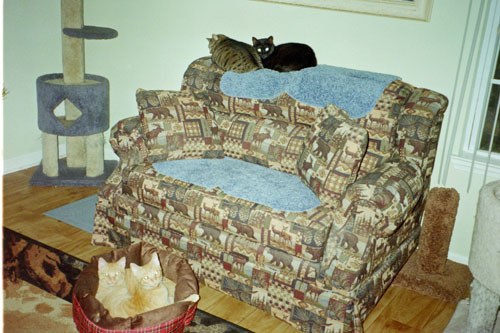 That’s Tika (black cat) and Tabby on the back of the couch, and the boys in the bed on the floor. 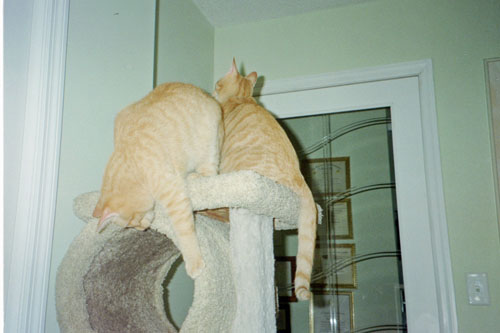 Checking out one of the many cat trees! 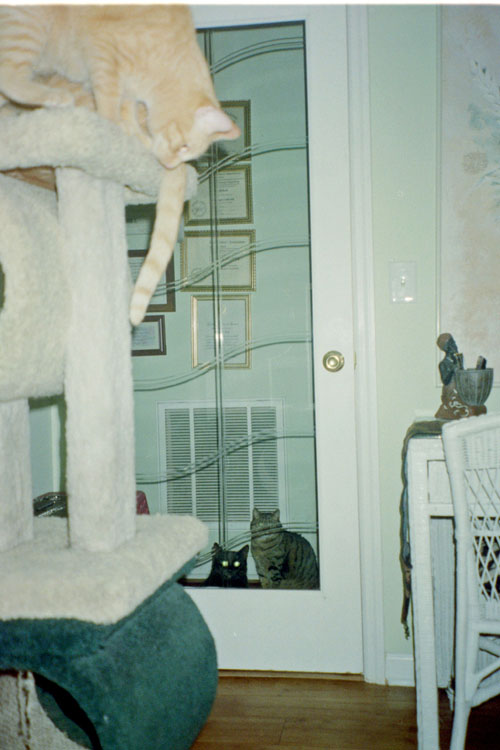 I love the looks on Tika and Tabby’s faces. They’re thinking “What the – ? Who are these INTERLOPERS?” 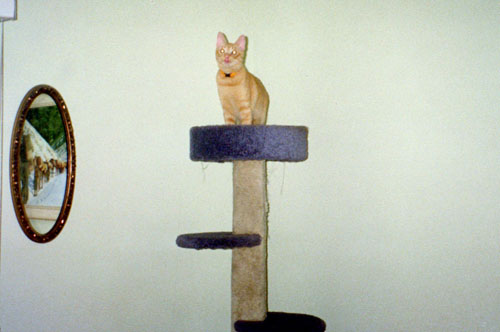 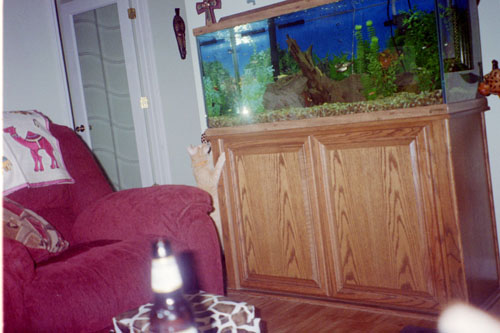 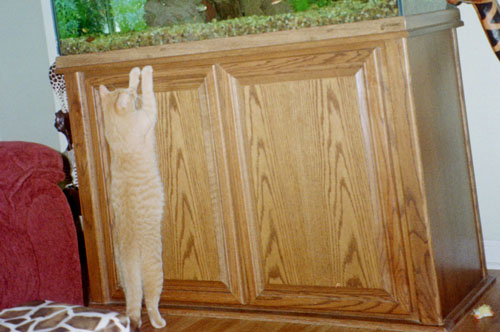 Lynn reports that the boys are doing great, and she absolutely loves them. They’re the snuggle bugs she was hoping for, and I’m sure they’re quite the entertainment, too.

Thanks for the update, Lynn! I love seeing their little faces again. 🙂 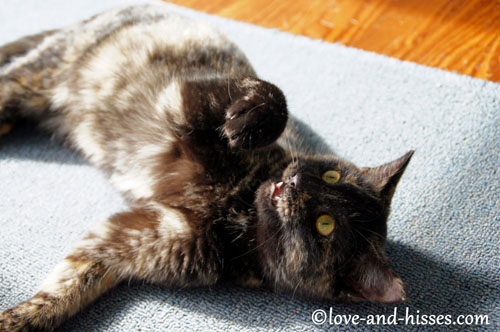 Maybe she’s like one of those pregnant ladies that doesn’t look pregnant until like three days before she gives birth, and then she’s ALL belly? 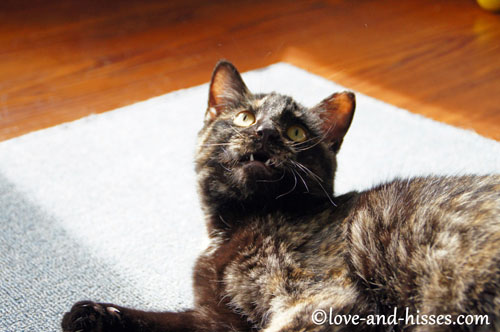 She is SUCH a little nut. 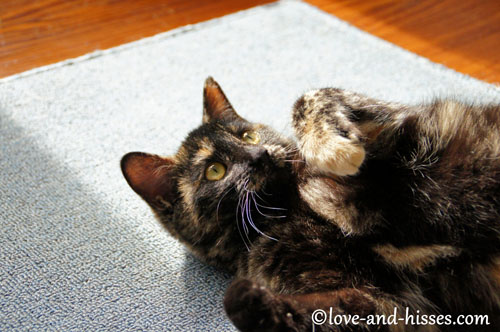 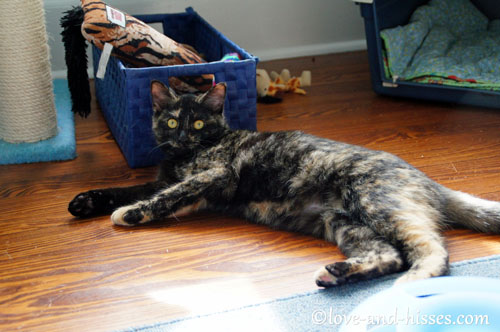 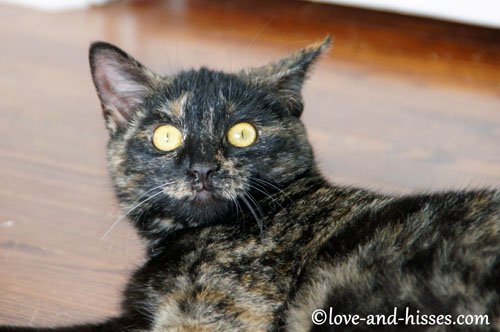 I love her orange tabby stripes. 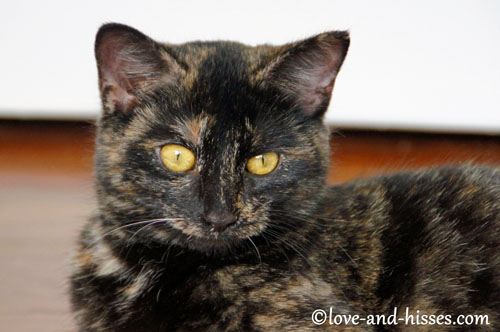 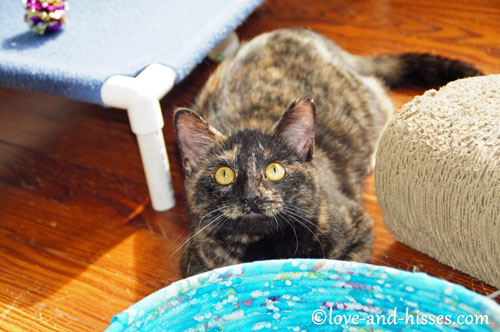 Yesterday I was hanging out with Lilybet, and Mercury was howling and howling, because she could hear my voice but not get to me for petting. So I cracked the door open, planning to let she and Lilybet sniff each other.

Well, Mercury pushed through the door and started running around and wildly sniffing every inch of that room. She completely ignored Lilybet, who was following her around hissing and growling, and finally I picked Mercury up and put her out so as not to stress Lilybet. And Lilybet just looked at me like “Do not let that happen again.” 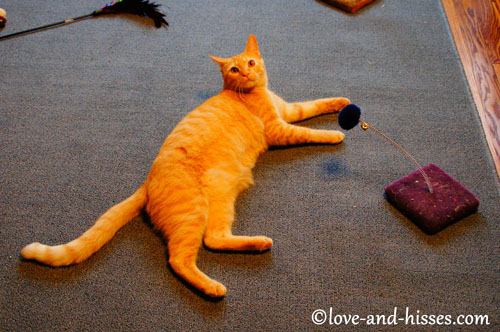 Kennebec is such a chill boy. 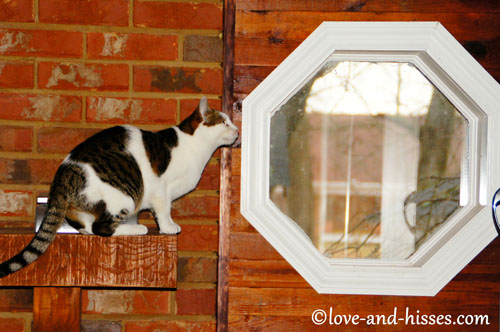 Mercury, checking out the mantel in the dining room. 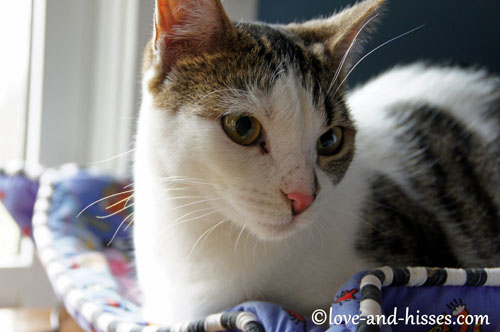 And hanging out on my desk. 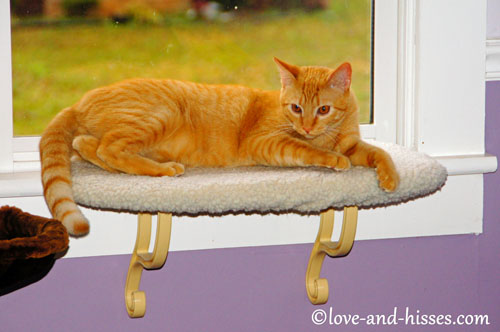 Everyone loves the window bed. 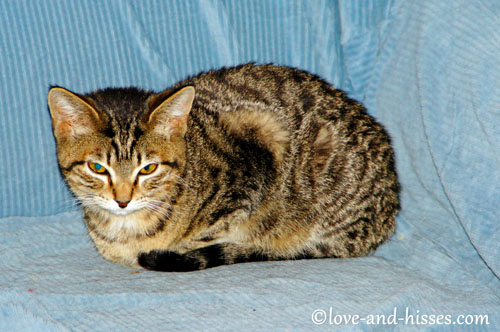 Baby Beans on the chair in the guest bedroom (where he spent most of yesterday).

I’ll be heading out of here in a little while to drop Kennebec, Mercury, and Baby Beans off at Petsmart. It was just a tiny bit insane around here yesterday with all those cats running around. I’m going to hate the drive back to Petsmart (maybe I should take ear plugs). I’m keeping my fingers crossed that they ALL get adopted this weekend, because they sure are good kitties. 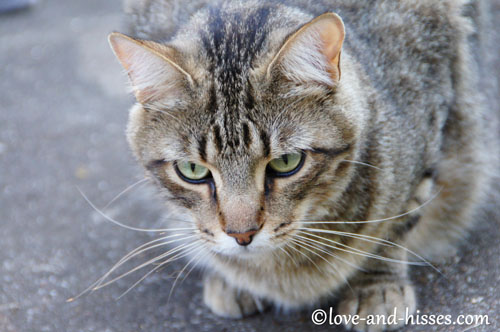 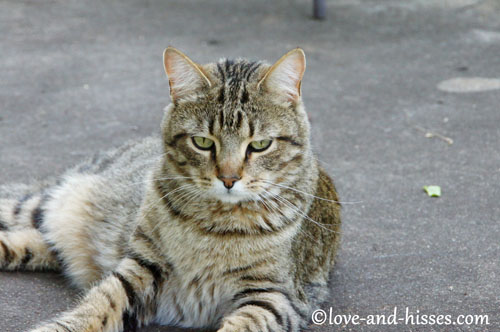 I wish I could remember to tell you how gorgeous he is. I seem to keep forgetting, though (HA).