Tia Teriyaki and Hannah Hollandaise went home yesterday. They’re now residents of Myrtle Beach, South Carolina AND you can follow them on Facebook right here. As expected, when three strangers walked into the foster room the kittens all ran and hid. Sofia Soy Sauce came right back out, and Molly Marinara ain’t skeered o’ no strangers. After a little while, everyone else came out because they were afraid they were missing the fun. Tia and Hannah – who is now Mia – weren’t thrilled about going into a carrier, but reports were that they settled down after about 10 minutes into their drive home.

Today I’m sharing all the pictures that include Tia and Hannah (and I am working on a video for social media, which you’ll see tomorrow.) 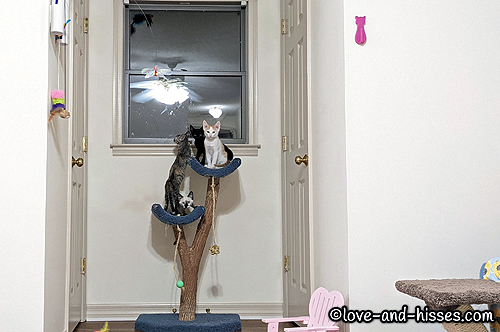 Checking out the cat tree (and keeping an eye on me.) 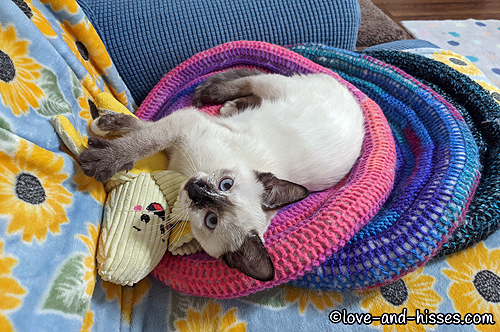 Hannah and the banana. 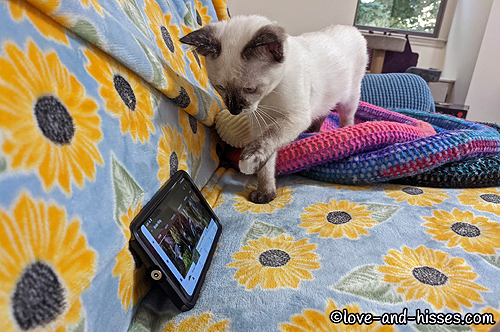 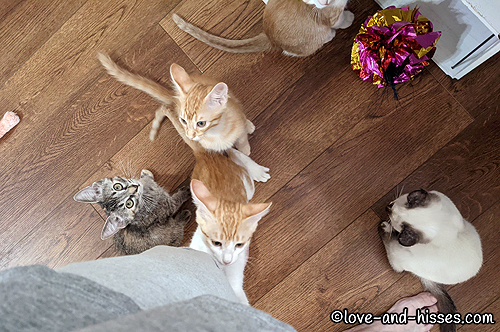 Wondering where the food is. 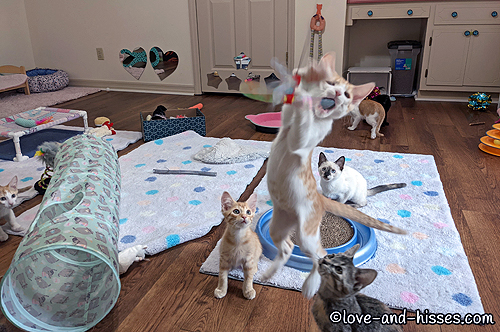 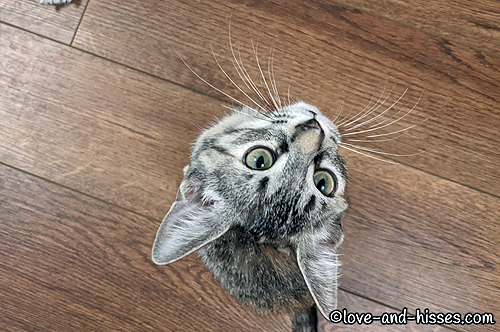 Tia Teriyaki from above. 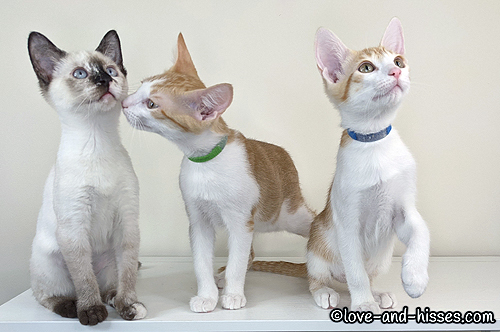 Franco Fondue checks to see if Hannah Hollandaise has any leftover food on her face. 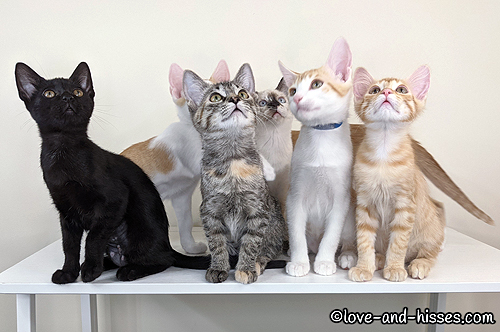 Trying to get a family portrait. 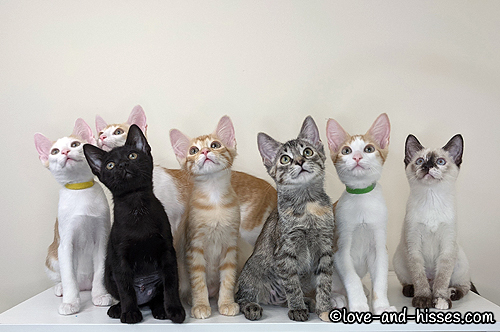 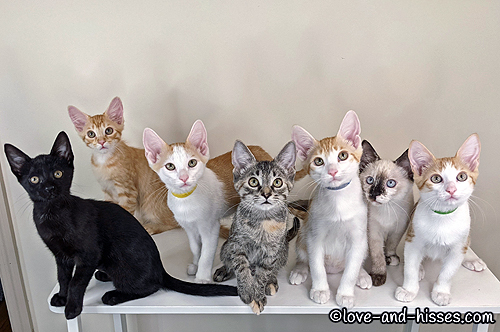 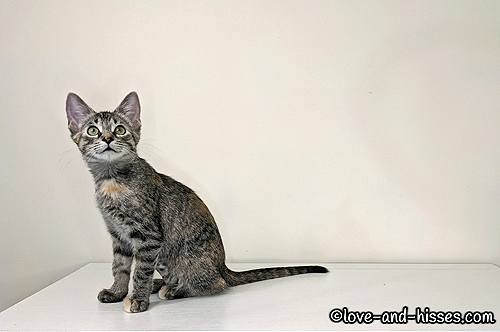 A Glamour shot of Tia Teriyaki. 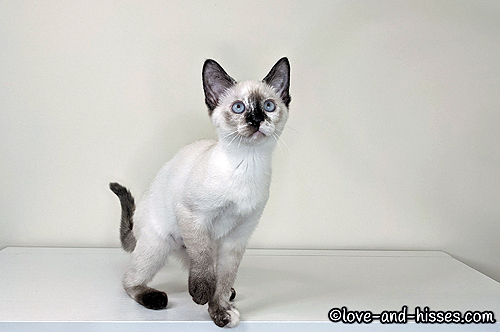 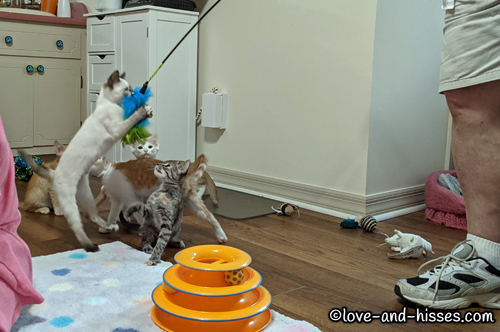 Tia and Hannah’s new dad lured them out with the feather teaser and Hannah showed off her moves. 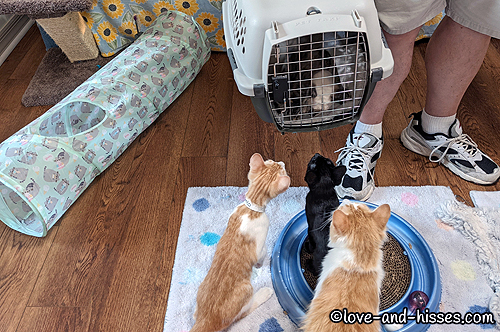 And off they went!

A little while later I loaded up the boys and dropped them off at the vet. I had thought they’d be coming home the same day, but as it turns out they also spent the night at the vet (why should the girls get all the fun?) and I’ll be picking them up this morning. 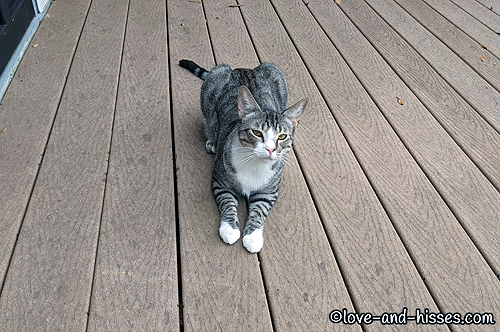 Oh that Charlie, he’s such a pretty boy. 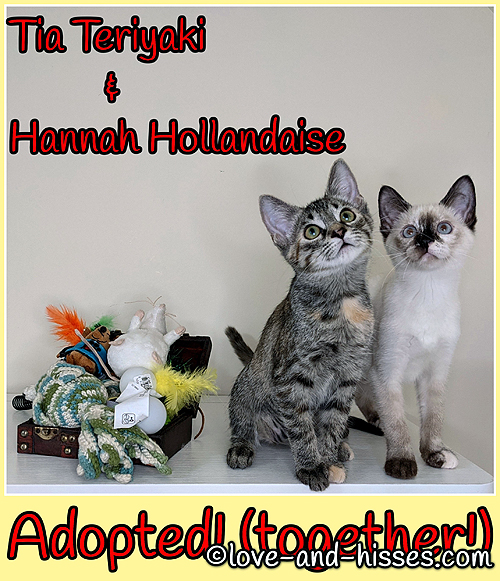 Hooray, hooray, Tia Teriyaki and Hannah Hollandaise have been adopted (together!) and are headed home to Myrtle Beach, South Carolina! They join two older kitty brothers. Tia will remain Tia, and Hannah is now Mia – and you can follow them on Facebook! 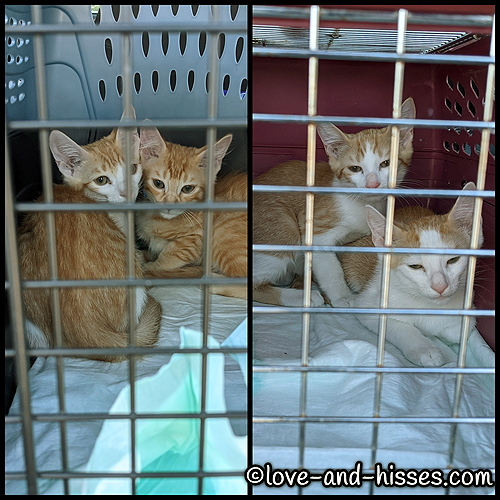 The boys are at the vet for their neuter surgeries today, and no, they’re not happy. They’ll be fine, will spend the night at the vet, and will be back here tomorrow morning. With just Molly Marinara and Sofia Soy Sauce in the foster room, it’s gonna be QUIET. 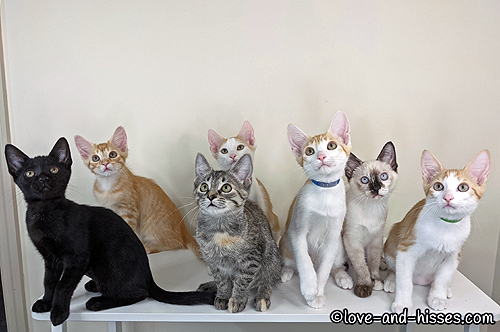 In case you missed it, Hannah Hollandaise and Tia Teriyaki were adopted (together!) this morning and are headed home to Myrtle Beach, SC. Yesterday, I got one last family portrait (not including Molly Marinara because she is mean and won’t pose with the kittens for me.) On the far left we have Sofia Soy Sauce and Theo Pesto (who are adoption pending – together – and will go home in two weeks), Christopher Chutney (back), Tia Teriyaki (front), Alfie Alfredo (blue collar), Hannah Hollandaise, and Franco Fondue.