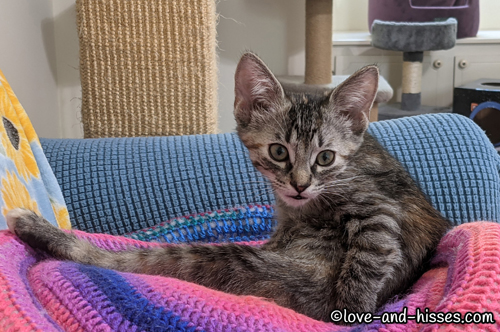 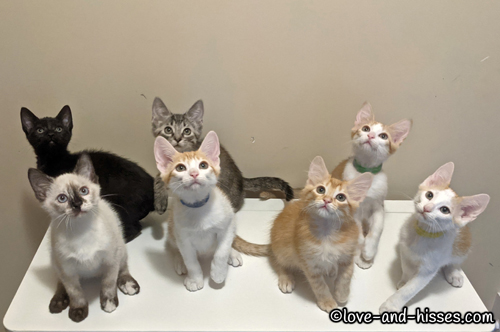 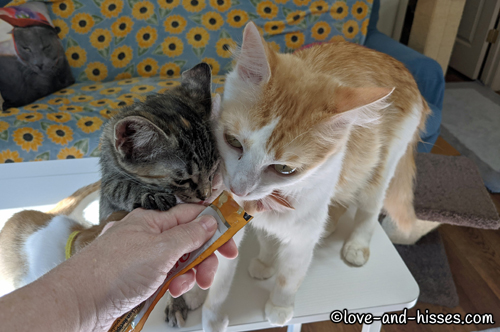 I brought it into the room and broke out the Churu. That managed to get Molly Marinara interested in being on the desk. 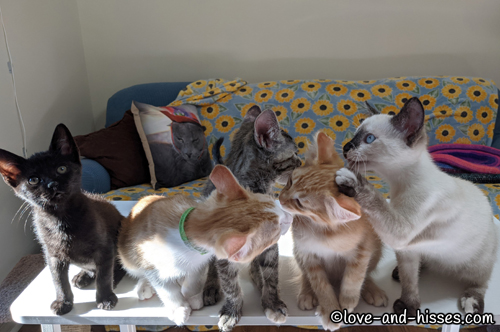 The kittens got Churu all over their faces and helped each other clean it off. They’re so helpful. 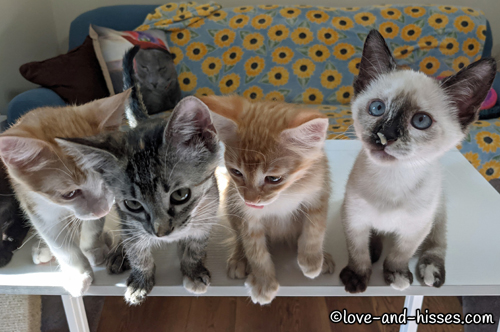 I love the blob of Churu on Hannah Hollandaise’s face. 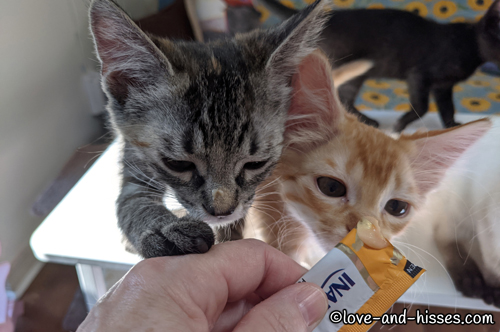 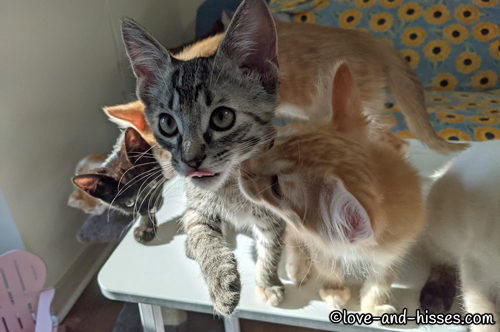 Theo Pesto’s offering to help clean Tia’s face if she needs it. 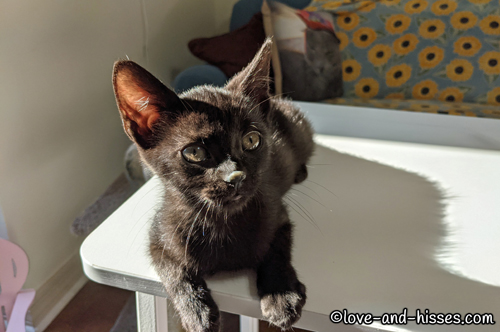 Sofia Soy Sauce (with a blop of Churu on her nose) took a minute to relax in the sun. 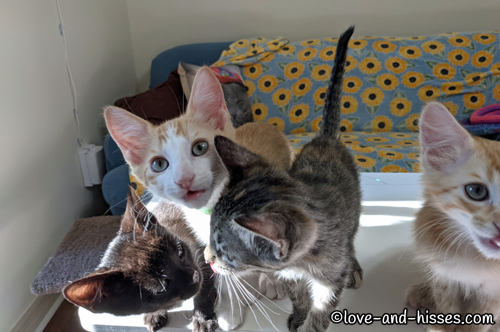 Franco Fondue is all “Is there more? Or no?” 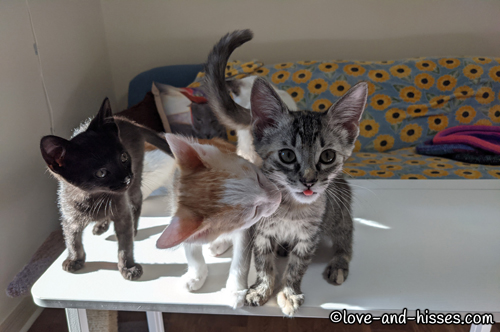 So the desk will work well, I think. It’s lower than the shelf at the last house was – the good thing about taking pictures on that shelf was that it was high enough that the kittens were hesitant to jump down. They don’t hesitate to jump from the desk, so I’ll have to get wild with the feather teaser to keep their attention long enough to get group pictures. I’m sure I’ll figure it out. And the good thing is that when I’m not using the desk, I set it over under the window (where the morning sun comes in), and it gives Molly Marinara a good place to hang out up away from the kittens. 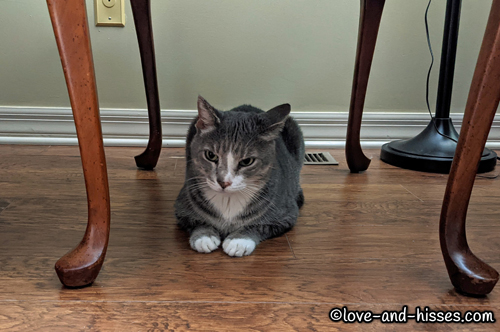 We had a new water heater installed last week, a process that took three days (not just the water heater, there were other things being done .. Oh, I don’t know what all they did. Fred told me what needed to happen and I died from the boredom. I’m sure it was amazing. I’m certainly not complaining about the instant hot water we’re getting now) and so for three days all the cats except Archie disappeared into another dimension. Archie mostly sat around and looked annoyed, but I saw him get a lot of petting so I’m sure he wasn’t too bothered. 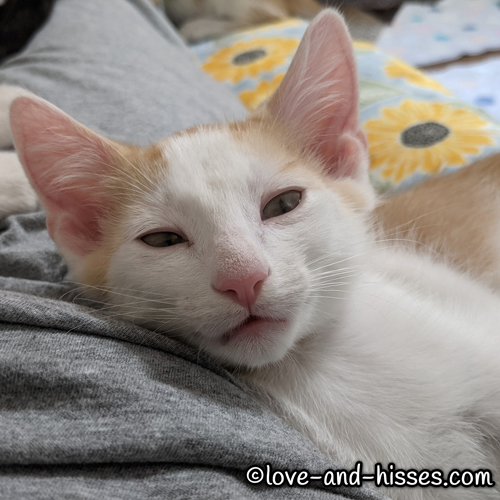 We have a lights-on, no-one-home situation going on here with Christopher Chutney. 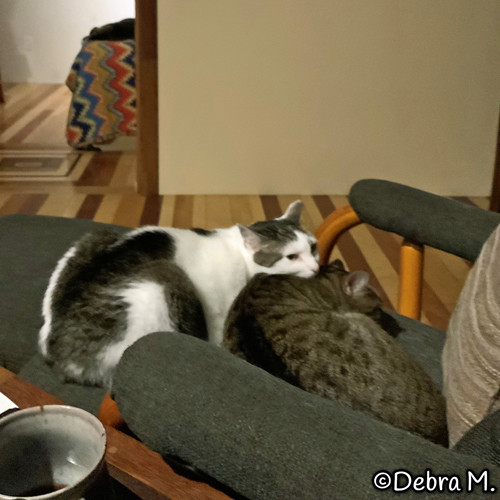 Look how absolutely adorable former foster Phoenix (one of Mercury’s Missions in 2017) is, resting her chin on her sister Amber (one of the Squash Bugs in 2015; she was Ambercup then). Couldn’t you just squeeze ’em both? (Thanks, Debra!)

YouTube link
Tossing ping pong balls for the kittens – who weren’t quite sure what was going on! 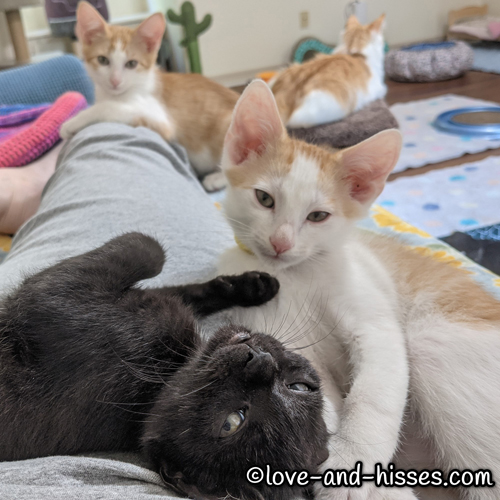 We had guys in the house doing work for three days straight this week, so I hid in the foster room with the kittens (I considered hiding under the couch with Alice, but I didn’t quite fit.) (Molly Marinara, Franco Fondue, Christopher Chutney & Sofia Soy Sauce.) 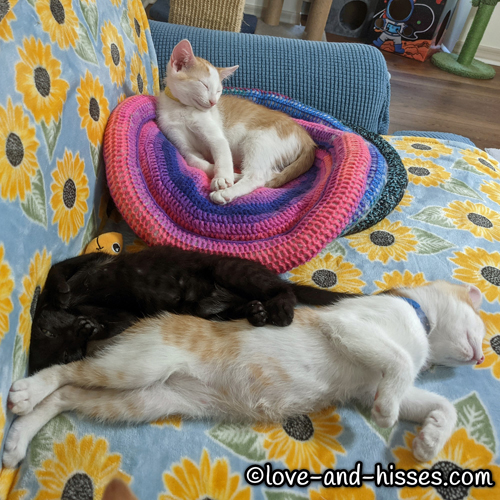 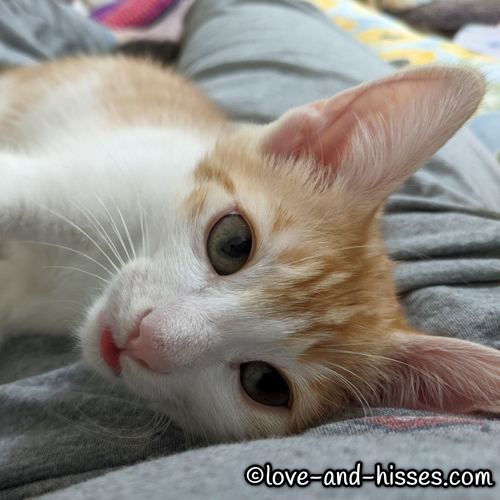 Alfie Alfredo has a blep. 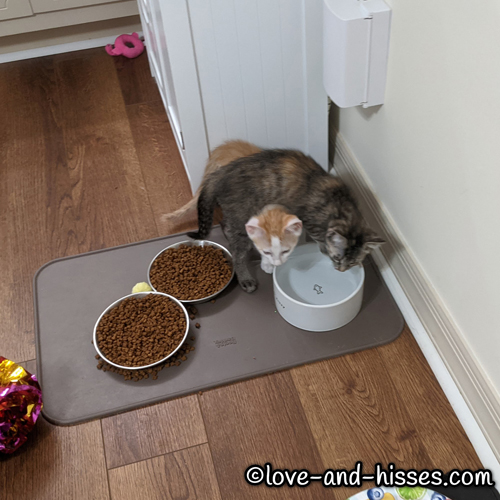 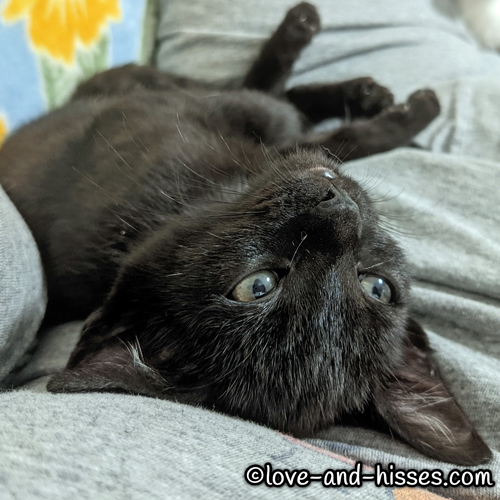 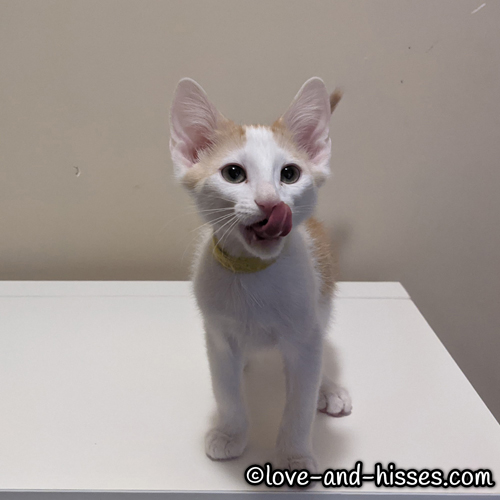 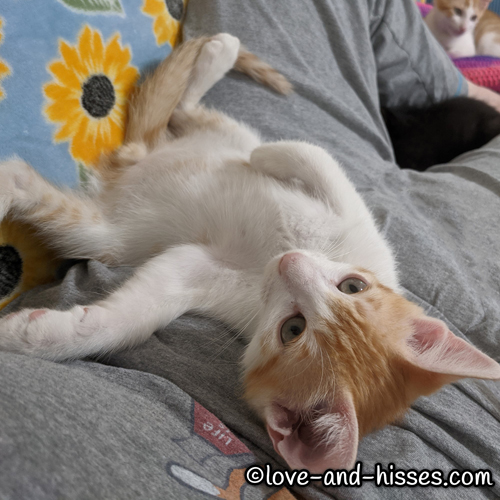 Alfie Alfredo makes himself at home. (Franco Fondue keeps an eye on things at the upper right corner of the picture.)

YouTube link
I’ve been terribly lax as far as introducing the kittens to the laser light. Luckily, they found it pretty interesting and got right into chasing it around! (Though Hannah Hollandaise is far more interested in jumping on Sofia Soy Sauce, it appears.) 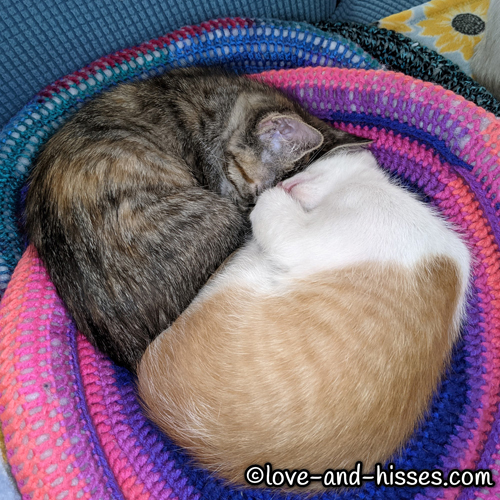