From Holly: Question for those w this experience: My cat has developed crystals (she’s been to vet). Vet recommended specialty food and gave us a few cans, but now she’ll be on it for a while. Who/what site is the cheapest for Purina Pro Plan UR diet wet food? I’ve looked at Amazon, Petsmart and they are about the same. The vet told me Purina directly. Chewy doesn’t carry it. Any other thoughts or have I got them all?

The only other place I could think of was Petflow – and their prices were about the same as Amazon. How about it – anyone know of any other places to find Purina Pro Plan UR canned food other than Amazon or Petsmart?

NEWS: We are adoption pending on Canasta! She’ll go home in a couple of weeks, and is joining a family with a kitty who will tolerate her bossy ways. We’re very happy for her – now she gets to be the baby! (I know that a bunch of you hoped that she’d be adopted with one of her kittens, and while that’s a sweet thought, I think she’s ready to move on past being a mama. She’ll be fine, I promise.)

I recently decided that I’d try putting a onesie (or, as they call it at TinyKittens, a “weansie” – weaning onesie) on Canasta to see how it goes. With past mamas and kittens, I’ve let the mamas set the pace as far as weaning the kittens. And with one bright and shining exception (hi there, Neko (formerly Katriane)), they’ve let their kittens nurse right up until they were separated. Which meant that often the mothers went to Petsmart or their new homes with milk still coming in and it’s also been a pretty sudden cutoff for the kittens. (As I recall, Albert and Willie nursed right up until about 10 seconds before we put them in the carrier to go home, and they’re not the only ones by far.)

So I bought a couple of these onesies from Amazon (if you search on “cat recovery suit,” there are a ton of options.) and on Sunday morning Fred gave me a hand putting it on Canasta. It’s been 3 full days now, and I have to say that so far, it’s working out well. Canasta doesn’t LOVE it and the kittens are a bit confused, but the suit doesn’t stop her from jumping, playing, sleeping or eating. Also, for about an hour in the morning and another hour in the evening, I take her into another room and take the suit off of her so she can clean herself to her heart’s content.

(Side note: no, I will not be taking a picture of her back end so you can see what it looks like, but I promise you that she has used the litter box plenty and has gotten nothing gross on the suit, which was my main concern.)

It takes about 2 weeks for milk to dry up (so I’ve heard), so we’ll see how it goes. 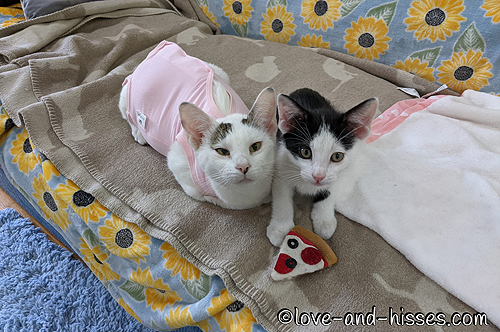 I’m kind of wishing I’d gotten something cuter – she looks like a sack of potatoes in this thing – but it’ll do. 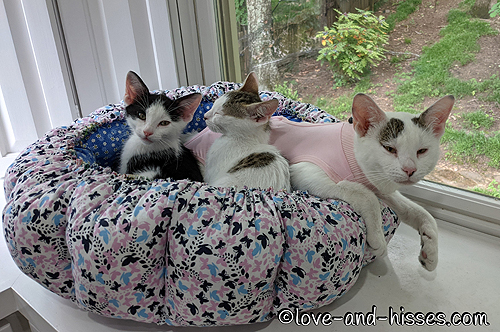 She was sleeping and the kittens climbed in with her… then woke her up snuffling around for the milk bar. Foiled! 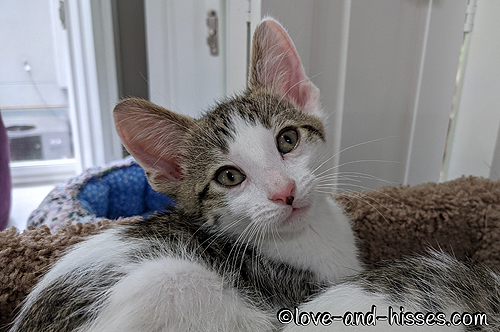 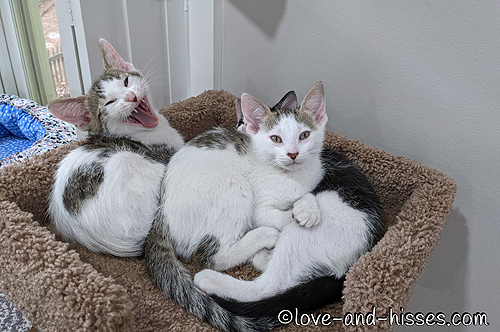 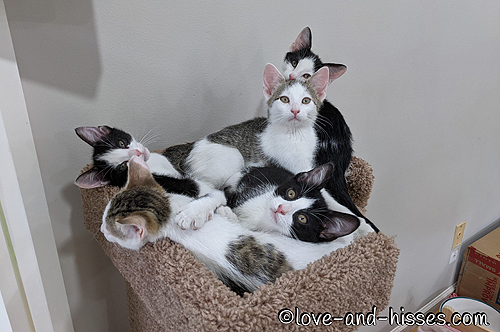 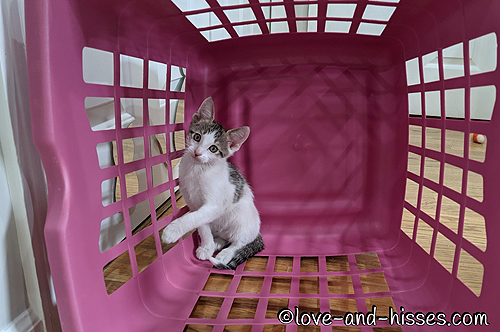 Helping with the laundry!

Last night I was in bed reading, and I kept hearing Hensley and Julie (the kittens we’re kitten sitting for another foster mom; they’re staying in my bedroom) making noises digging around and playing. They got quiet, and I assumed they’d fallen asleep under the bed, but when I looked they were nowhere to be seen. I started to wonder if they’d gotten into the boxspring (which shouldn’t be a possibility, because there’s a fitted sheet covering the bottom of it), but I slid half under the bed to look and didn’t see any place they could have gotten through. If Hensley’s head hadn’t popped out from around the headboard I’d probably still be looking for them. 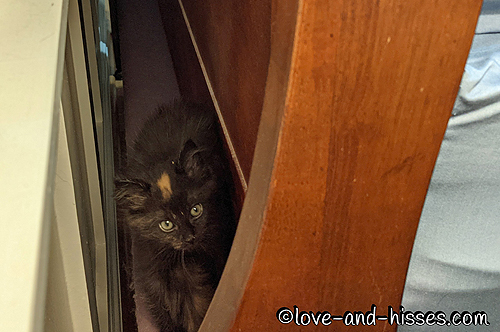 “Hallo. You needs to dust back here.”

Turns out that the boxspring sticks out a little way past the heardboard, and they’d curled up there and gone to sleep. Just when you think previous kittens MUST have found all the possibly hidey holes, along comes these tiny torties to up the ante. 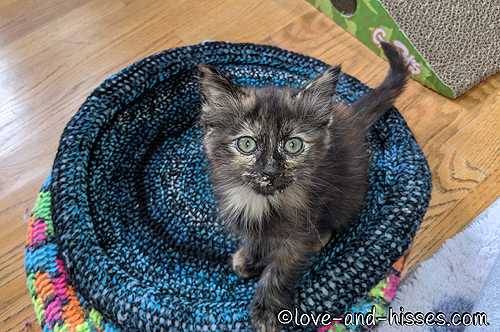 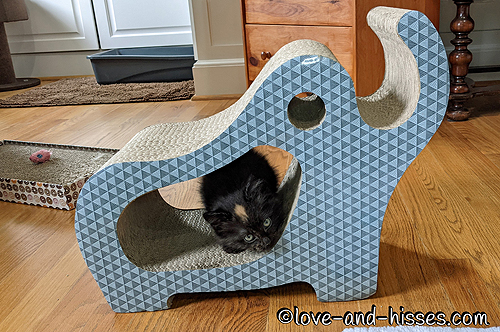 Hensley keeps an eye on me. 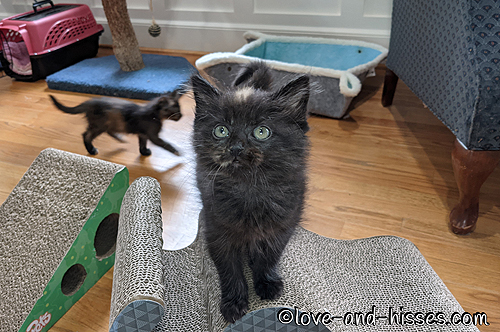 They spent the last two nights curled up right next to me. Such sweethearts, these two! 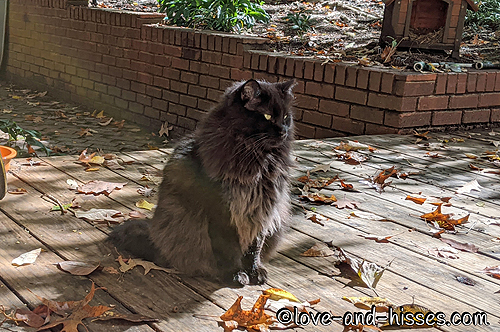