Yesterday was Toesday, so I thought it would be a good time to trim the kittens’ claws. This is the second time I’ve done it. Most of the kittens were pretty good about it, and even stayed in my lap for a few minutes afterward. 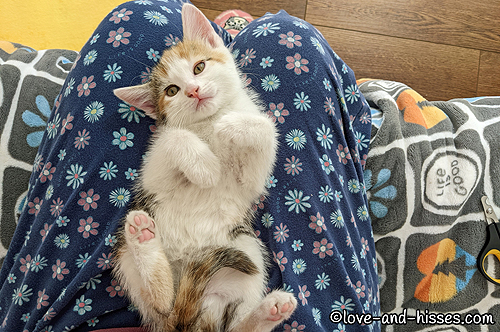 Hollyhock likes getting her nails did. 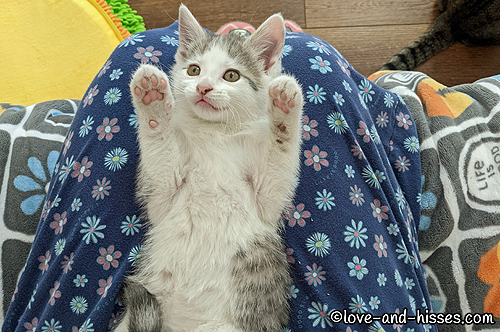 Kudzu’s not sure what happened. 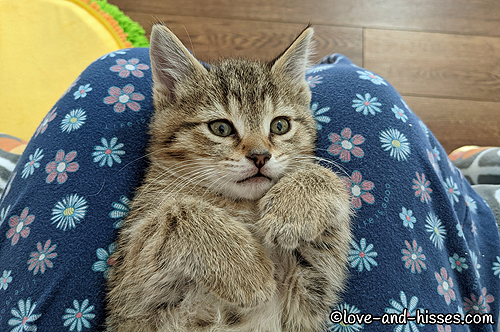 And Clover said “Are you QUITE finished, lady?”

I didn’t get a picture of Bramble, but he was pretty good about it, only complained when I got to the last couple of claws (he wanted me to hurry it up, I think.) Mondo was the only one who gave me a hard time, but I was able to get his claws completely trimmed before he ran off to play. It’s always easiest to trim them when the kittens are sleepy, and except for Mondo they were all settling down for a nap when I decided it was time to trim. 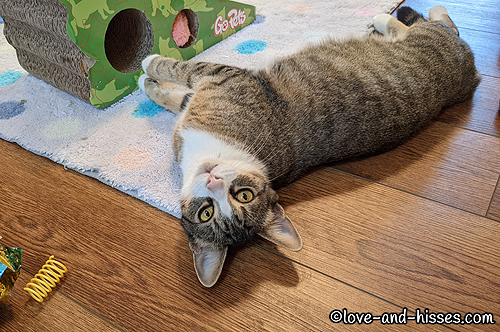 I did not, however, trim Mimosa’s claws, because she wasn’t having it. I may need Fred’s assistance to get hers trimmed. (He’ll hold and distract her while I do the trimming.) 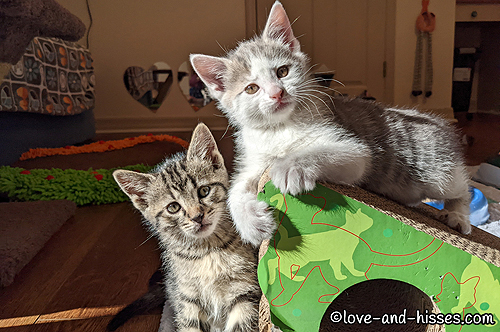 Mondo and Kudzu are all “How YOU doin’?” 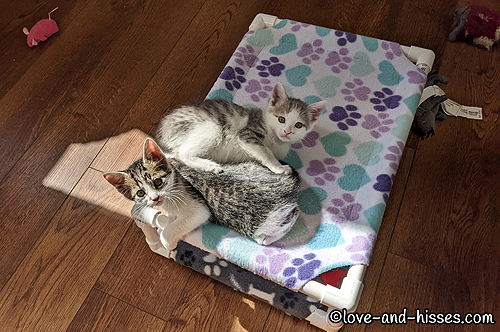 Bramble and Kudzu give the Ham-mick a try. 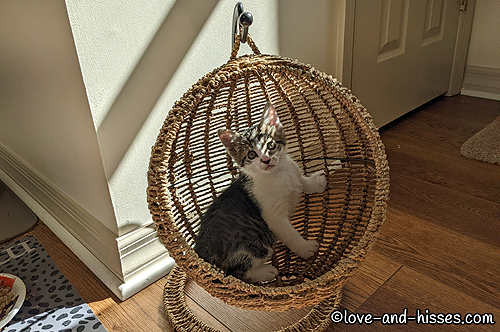 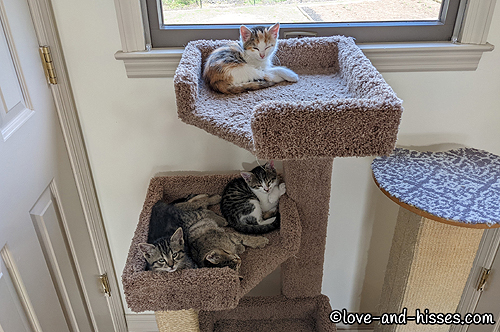 The kittens are 7 weeks old today! No big news to report – they’ve hit all the important milestones already, so we get to just enjoy them. The only kitten who immediately comes over and starts eating when I put out the plates of canned food is Mondo, though Bramble and Kudzu are starting to realize there’s a routine. Clover and Hollyhock both eat when they feel like it (in other words: I’ve not been able to get any pictures of all 5 kittens and Mimosa around a plate of food. YET.)

Mimosa is completely out of heat, thankfully, and her spay is on Monday, so I think we’re going to be lucky enough to avoid another round of yowling. 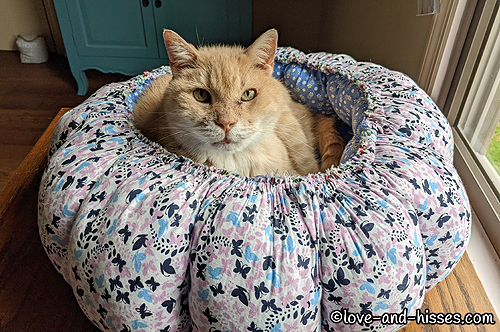 Newt thinks this cold weather (relatively speaking: we do live in Alabama, after all) is for the birds and he’s ready for spring. ANY time now, please. 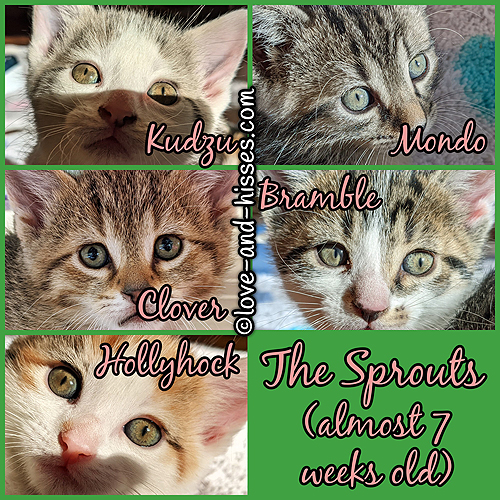 It’s been a couple of weeks since I posted an eye-color collage, so here you go! The blue is mostly gone, just a tiny bit around the edge of their irises. I expect Kudzu and Hollyhock will end up with amber eyes like their mama, and the other three to have green eyes – but we’ll see what happens over the next few weeks. 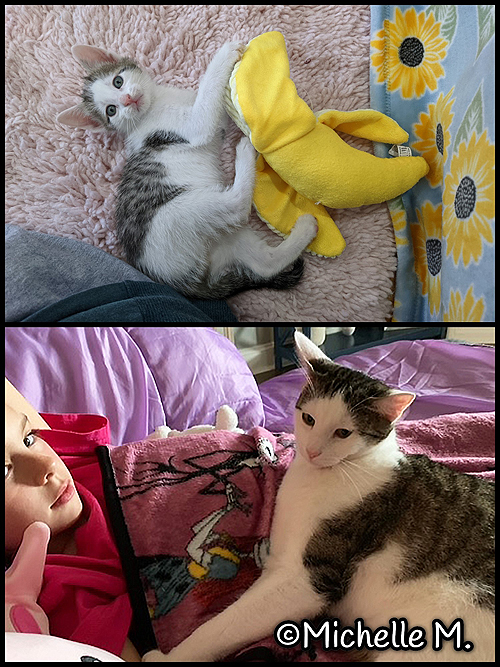 Look look look who it is! It’s Canasta’s daughter Fizzbin! The top picture is her exactly a year ago – and on bottom is what she looked like (and what she spent her day doing!) Michelle reports that Fizzbin is sweet, cuddly and playful. Awww, happy girl!⁠ 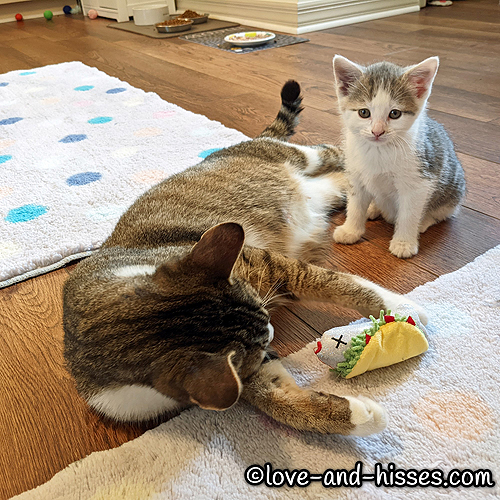 It’s Taco Tuesday, so Kudzu brought his mama a fish taco. He’s a sweetheart like that. (Just kidding… right after I took this picture, he picked up the fish taco toy and trotted away with it!) 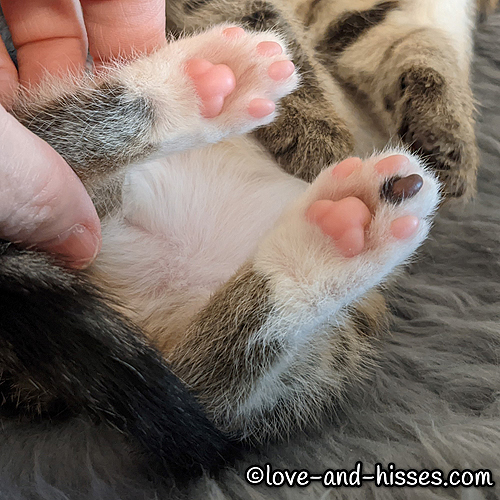 It’s Toesday, so please admire the beans on Bramble. I love that he has one black toe and the others are pink. (If I were truly dedicated, I’d have snapped a picture of the toes on his front feet, but that didn’t occur to me until just now. Maybe for next week!)

YouTube link
Behold Bramble and his graceful ways! So amazing, that boy. 🥰 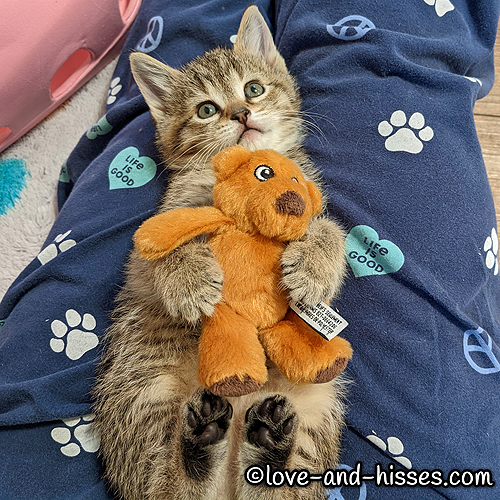