Thank you, everyone, for your kind words of sympathy about Spanky. I actually dreamed about him Thursday night, and he was healthy and happy, and it was just nice to see his bright eyes again.

Someone asked for the story behind his name. When we got him, we had Spot. Fred decided for some reason that we should give all future cats names that start with “S.” We would lay in bed and throw out names that started with “S”, and debate the different names. I think that Fred mentioned the name Spanky and I thought it was cute.

As Spanky got older, he got skittish when strangers would come over, and Fred started calling him “Skittyboo”, and I picked that up, too. We almost always called him Spanky, though.

We kept up that “S” naming theme for several years. Tubby’s “real” name (ie, his name on record at the vet’s office) was Snoopy, Fancypants’s name was actually Stimpy, Miz Poo’s real name is Scrappy (though even that isn’t on record at the vet’s any more – she’s listed as Miz Poo; if the vet called and wanted to talk about Scrappy, it would take me a long moment to realize who they were referring to), and Mister Boogers was Stanley. (This led a friend to say to me, when we were debating names for someone – fosters, maybe? – “Why are you bothering to even NAME them? You’ll just end up calling them “Mister Boogers” or something like that!”) Mister Boogers was the last one we deliberately chose an “S” name for – Sugarbutt has one, but that was because it was such a perfect name for him rather than using the name because it starts with “S.”

I wanted to mention that Joasia – who asked for advice for her Chester, who was recently diagnosed with CRF – said goodbye to her sweet Chester on Thursday, so please send some love and warm thoughts her way, would you? I know that Chester and Spanky (and so many other of our beloved kitties) are frolicking together at the Rainbow Bridge.

(PS: I would like to apply for a future position as Head Kitty Scritcher at the Rainbow Bridge. Wouldn’t that be the best afterlife ever?)

By the way, the entry that ordinarily would have been posted yesterday (with questions and comments from you guys) will be up on Monday. Today, it’s all kitten pics (and a video) and there’s going to be more kitty pics (and possibly a video) tomorrow, too! 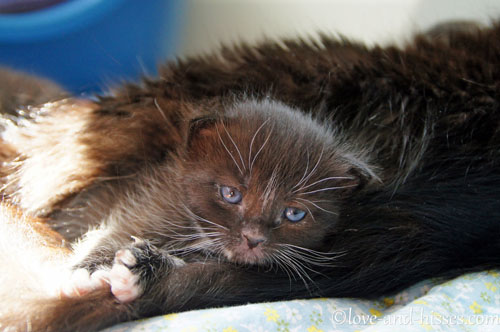 Buttercup, hanging out between Kate’s legs. She likes to lay under Kate’s tail as if it’s a blanket. I love the look on her face. “You gots a problem with that?” 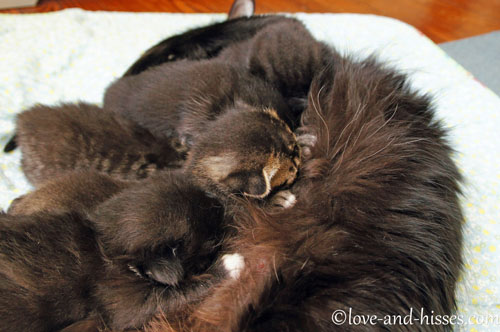 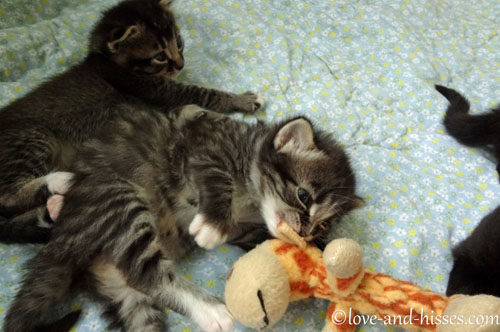 They’re starting to be a little interested in cat toys! 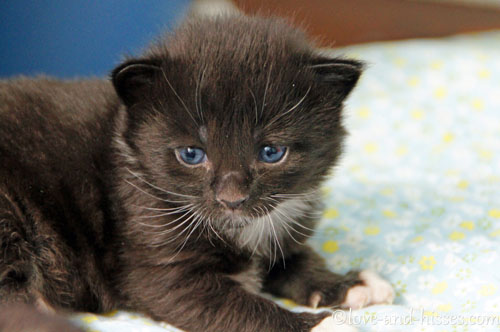 Charming seems to be the laid-back, quiet observer of the litter. 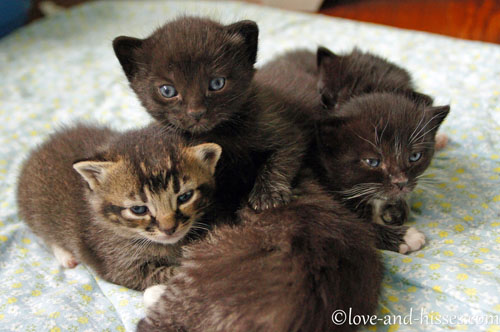 Jareth, atop the pile. 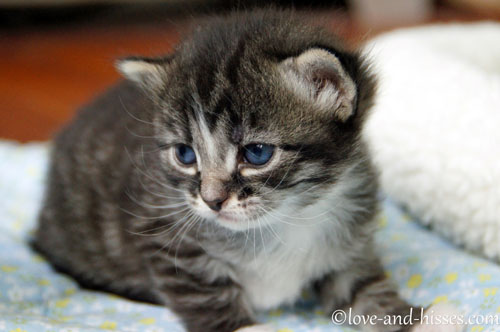 Leia’s having a bad hair day. 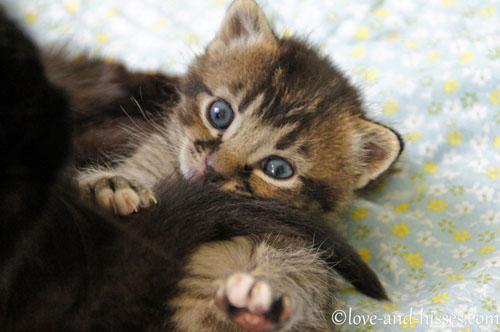 “Somebody’s BUTT is always in my FACE!” 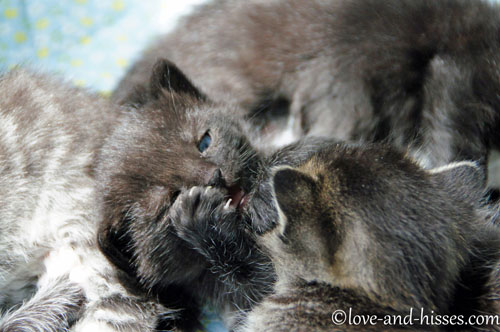 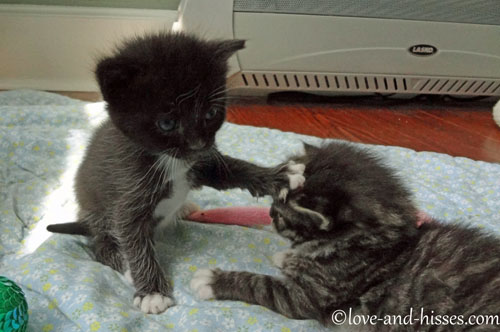 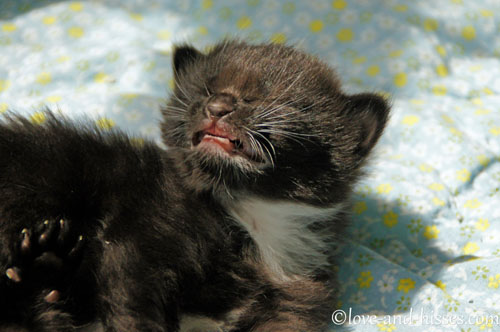 The face is KILL.ING. ME. DEAD. (And yes, you DO see tiny little teeth!) 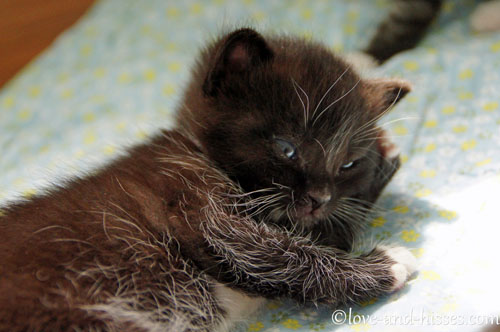 Buttercup shows off her frosted arm. 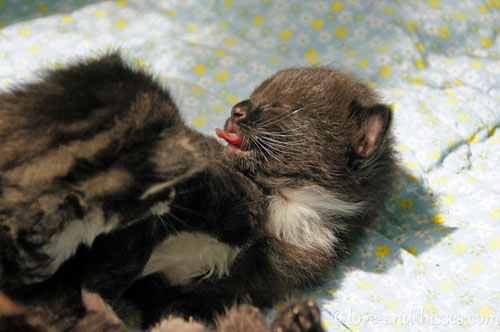 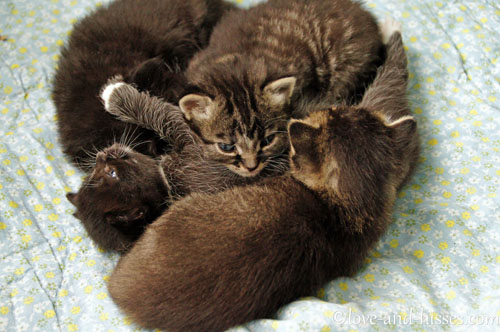 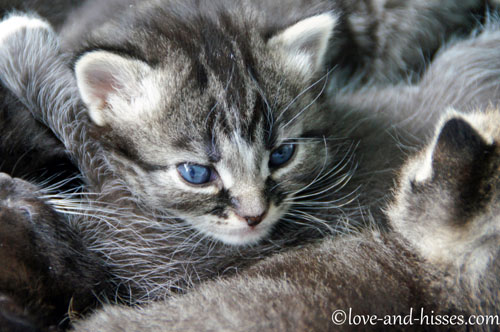 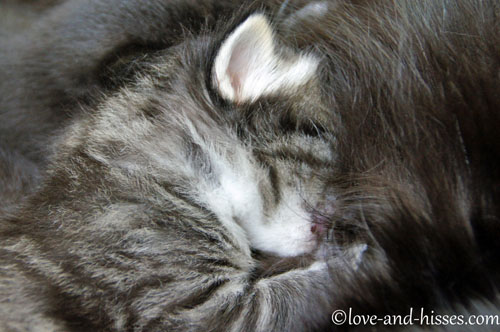 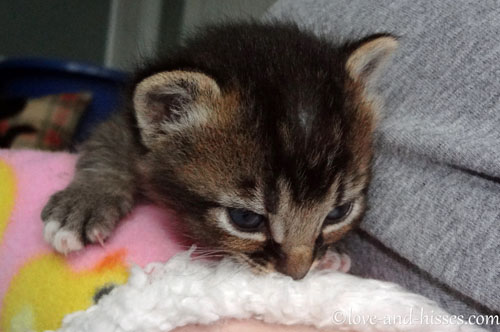 Aslan is rather enamored of my slippers, and every time I wear them into the room, he licks the lining of them. 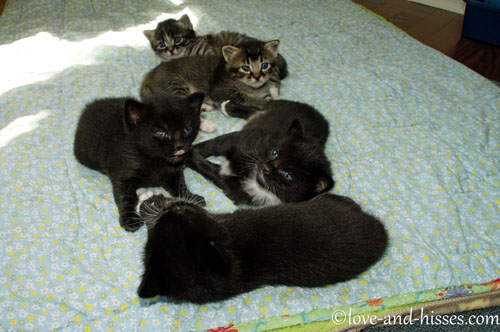 Hangin’ on the blanket. 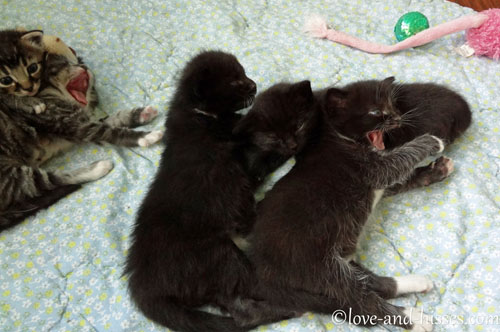 Tandem yawning. But Buttercup’s face is cracking me up – she looks like she’s on a roller coaster, screaming her head off. 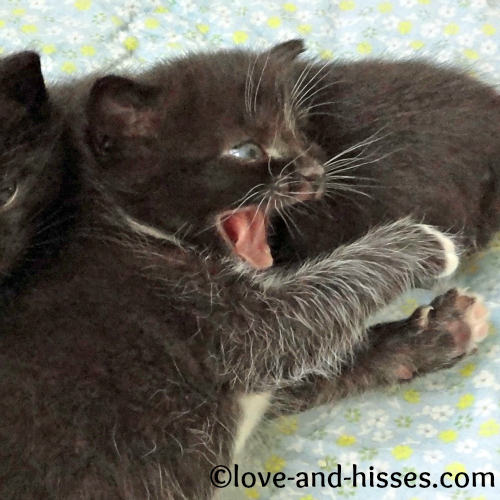 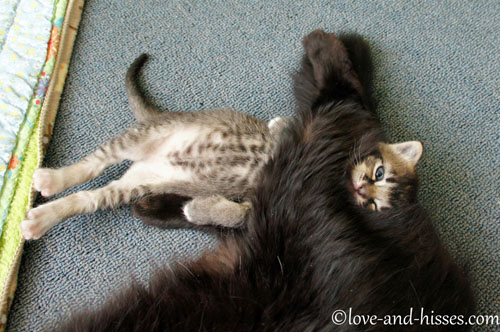 Aslan, pinned between Kate’s legs. He’s thinking “How do I get myself into these situations?!” 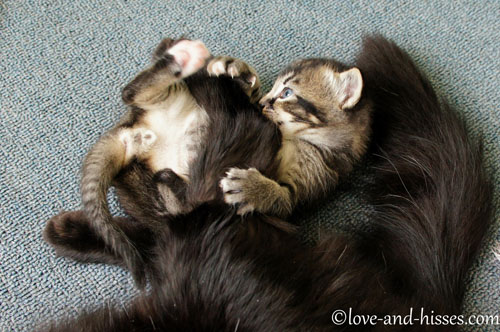 Howzabout a video? They’re a few short videos combined into one longer video. I dare you not to fall in love with Charming and Jareth. 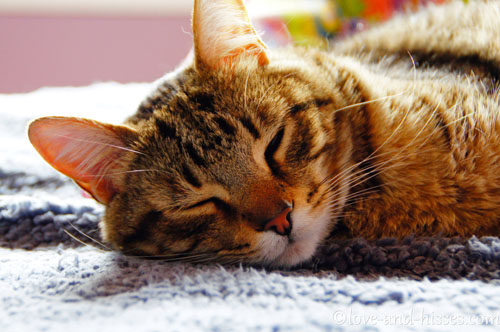 It’s da Corbs, hanging out on his favorite blanket.