I weighed the kittens Saturday evening, and can announce two things, regarding our wee Miss Beulah:

1. She gained TWO AND A HALF OUNCES in the last week, bringing her up to a whopping 13.5 ounces.

2. (More impressive, as far as I’m concerned) She can now use the litter box and NOT immediately tromp through her poo!

Fred continues to think she’s funny-looking, but I think she just gets cuter. She’s been a lot more willing to pick fights with her brothers and sister lately, and it’s kind of funny to see a kitten more than twice her size squealing because this tiny little thing is biting his or her tail.

Phinneas and Ezra are both just over two pounds now – once the rest of the kittens are at least three ounces over two pounds, I’ll take the whole bunch (except Beulah) in to be spayed and neutered. It’ll be a few more weeks, I’m guessing.

The kittens are continuing to have the run of their room and the bathroom most days. There’s a very tall litter box in the bathroom, and the kittens insist on using it even though it’s pretty difficult for them to climb into it. They’ll get in there two or three at a time and kick the litter around – it’s funny to see how thrilled they are.

For now, since they’re not showing any real interest in moving beyond the bathroom, I’m going to keep them confined to the foster room and bathroom. My parents are visiting, and the guest bedroom is where Stinkerbelle likes to hang out – since she can’t hang out in there (we make all guests keep the bedroom door closed at all times so a cat can’t sneak in and pee on something; yes, that’s right, we ARE a class act around here!) she hangs out in my room. So since I don’t want to block off her access to my room, I won’t let the kittens go into my room ’til Stinkerbelle can hang out in the guest bedroom again. 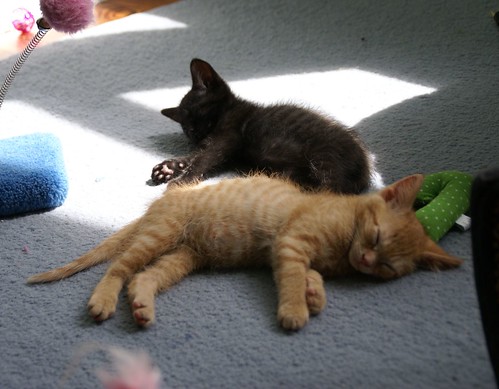 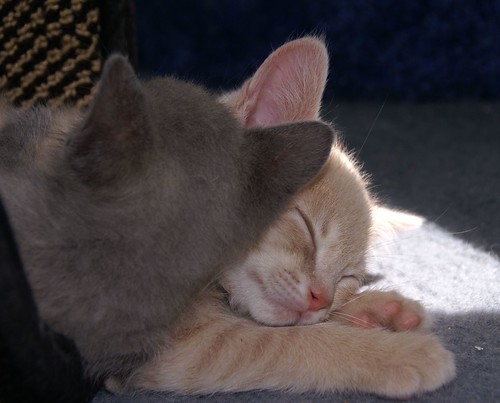 Beulah, snuggling up to Elijah. 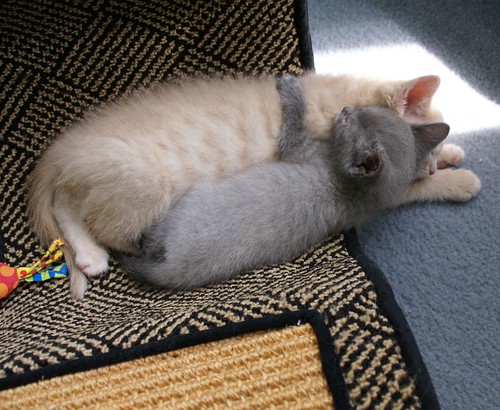 I love how Beulah is hugging Elijah like he’s a big ol’ body pillow. 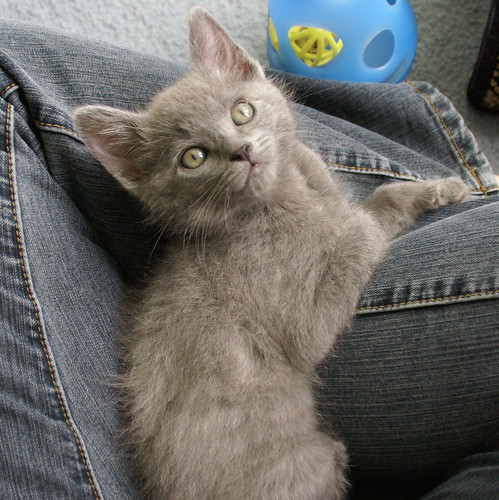 Caleb in my lap. He’s a purty boy. 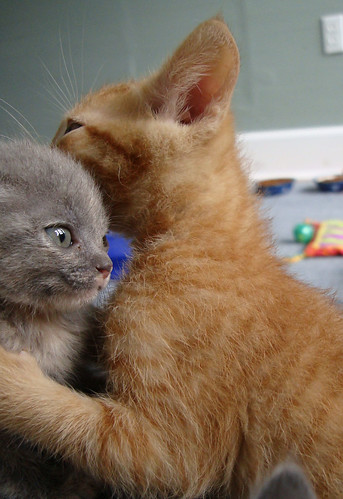 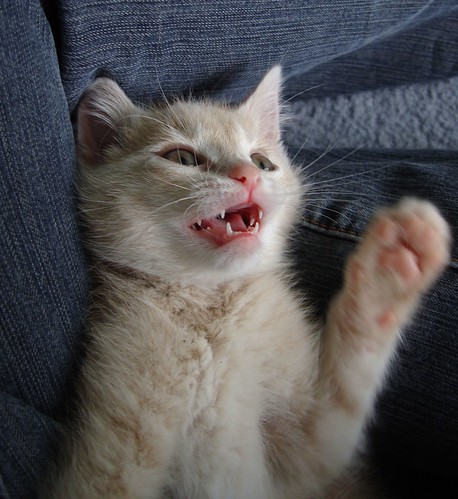 “Oh, oh! And then after we go to the litterbox, we’re going to eat, and then we’re going to go stare at the big kittens through the screen, and maybe we’ll hiss at them! You can’t miss it, it’s gonna be spectacular!”