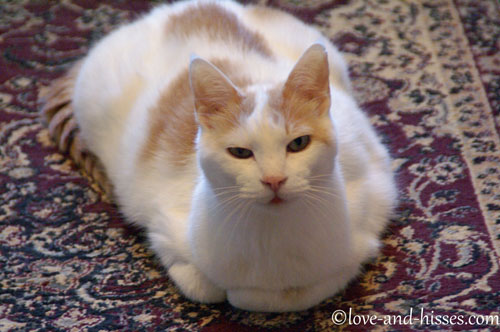 Yesterday, we said goodbye to Spanky. He’d been doing so well on the Liqui-Tinic that we were starting to think that he’d be with us for months and months to come. But over the weekend he started sliding rapidly downhill again, and beginning Monday he refused to eat no matter what tasty treat we tempted him with. He got that look in his eyes, and it was clear to us that it was time. In the end, Liqui-Tinic gave us two more months with Spanky than we would have had, and I am so grateful that we were given that time with him. We were able to spoil him with treats and shower him with love, which is what every cat deserves.

He went peacefully as Fred and I petted him and told him what a good boy he was, and he purred right up until the very end.

He would have been 17 in September.

On Thanksgiving Day 1996, we went to Fred’s sister’s house for dinner. She had a barn cat who had recently had kittens, and I spent the day with a kitten on my lap. It gave me a serious longing for a kitten of my own, so I began bugging Fred. He was pretty firm in saying “no” to me, so imagine my surprise when he arrived home a little late from work a few weeks later…with a tiny white and tan kitten on his shoulder.

Spanky was about 10 weeks old when Fred brought him home. I couldn’t, for the life of me, convince him to eat cat food. He’d howl at me like he was starving, and I’d show him the cat food and he’d look at it and look at me with a big question mark over his head, and then he’d howl some more. Out of desperation, I gave him baby food, and he ate every bit of it.

He had a lifelong love affair with chicken baby food. 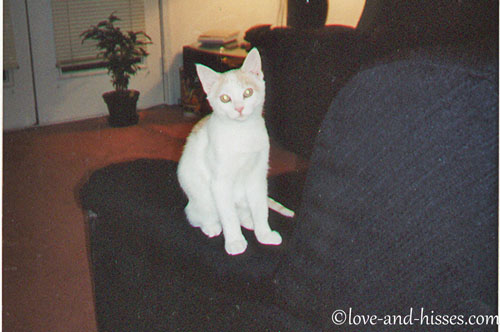 Spot was the head cat in charge when Fred brought Spanky home, and Spot was less than impressed with Spanky. Spanky, however, thought Spot was AWESOME. We had a wingback chair in the bedroom where Spot liked to hang out. Spanky would go behind the chair, and we’d hear the sound of him climbing the chair. It always went on FOREVER, and Spot would look more and more disgusted, and finally Spanky’s happy little face would pop over the top of the chair, and then he’d jump down to sleep next to his big brother. 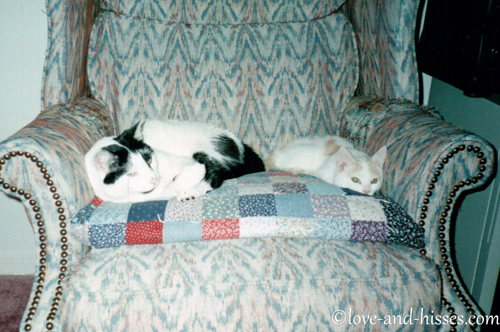 Spanky always loved his people, and he slept with me every single night for the first few years of his life. He wasn’t picky, though – he loved Fred with all his heart. 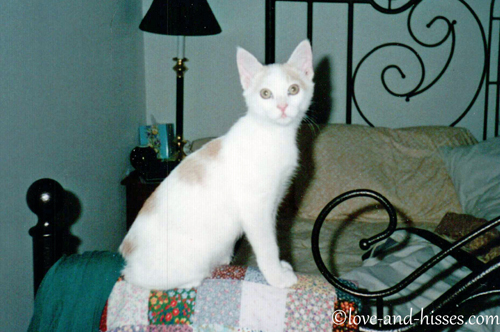 I wish I had more pictures of him from when he was tiny, but that was back in the days before digital cameras, unfortunately.

Spanky absolutely radiated joy. He was just the happiest boy, and he would purr so hard that he sounded like a cricket. He was also very talkative, and enjoyed wandering through the house singing – and he very often did it in the middle of the night when all his people were asleep. If you yelled “Spanky!” at him, he’d be quiet for a moment, then give you a very soft “Maowww!” before shutting down the singing completely.

If you meowed at him, he’d meow back, as shown in this old video and this one from last year.

And until the advent of flat-screen monitors (a very sad day indeed), he found the perfect place to keep us company. 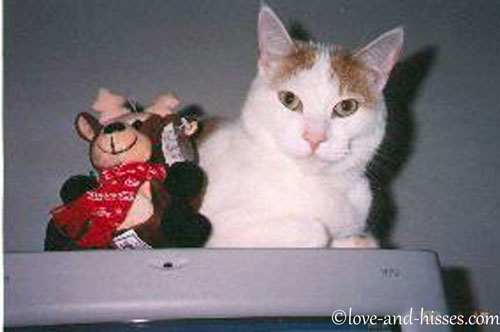 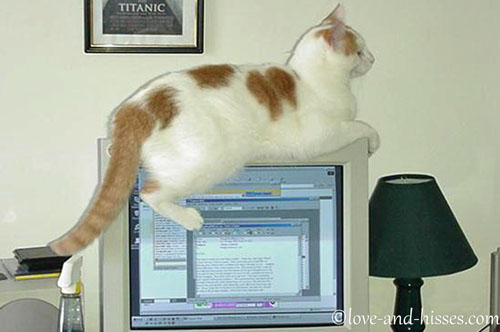 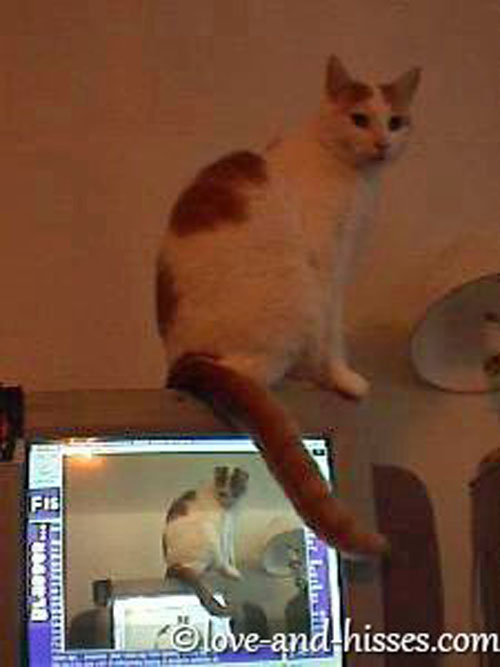 He loved to be outside, and if the weather was halfway decent, his mornings were always spent outside, sitting by the fence, watching the squirrels and birds. 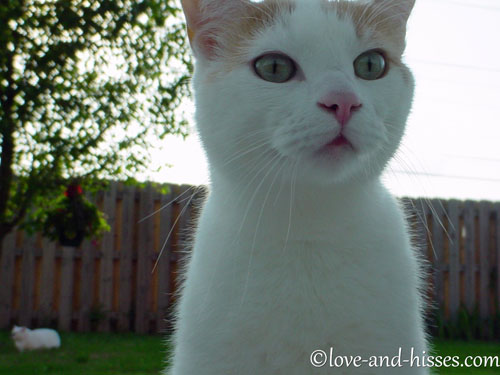 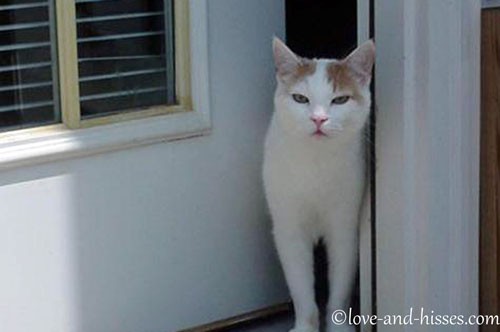 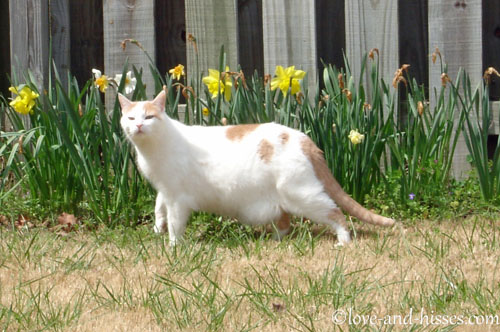 As much as he loved being outside, he loved it when we were outside with him, and he’d always greet us with a meow and a loud purr. But if he was inside and you were outside where he couldn’t get to you, well, he had something to say about THAT. He’d meow and meow until you got yourself back inside. 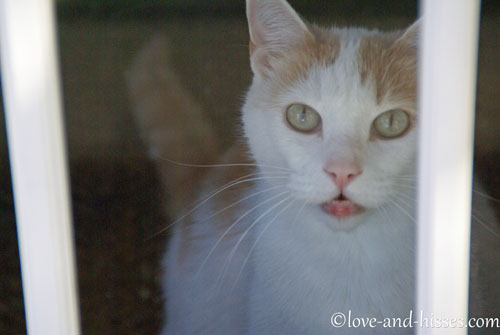 He had the most beautiful seafoam green eyes and I was never able to properly capture the color in a picture. 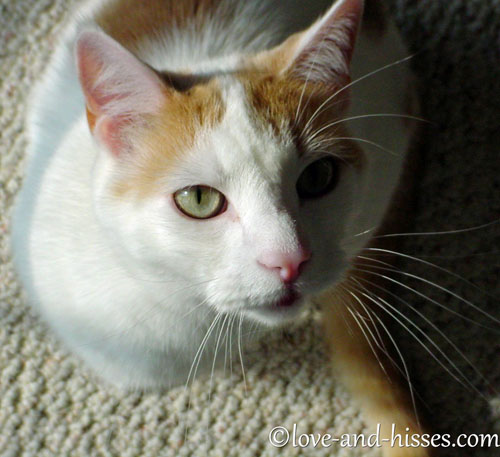 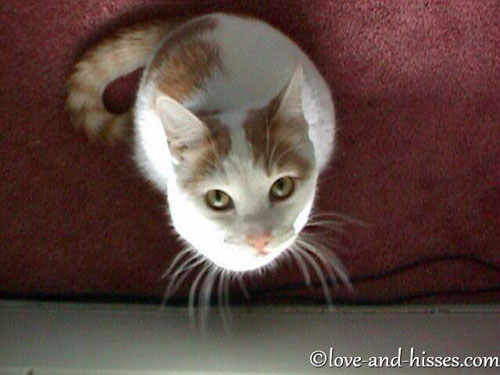 He had the most beautiful, silky, soft fur. He kept his white fur pristine, right until the very end. 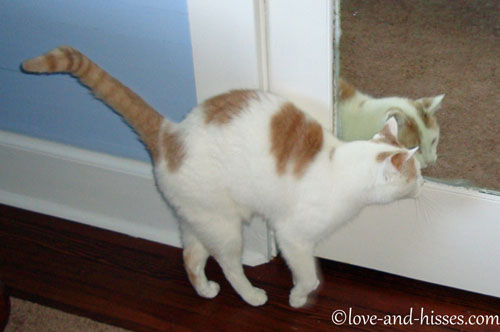 Like all cats, he loved a good patch of sun, and would follow it across the room. 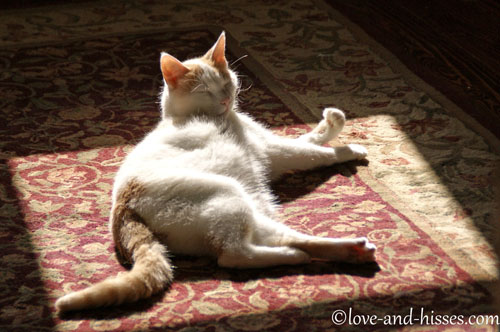 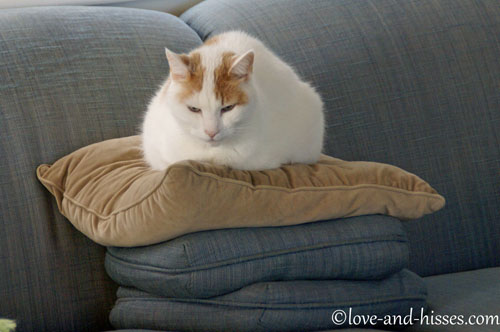 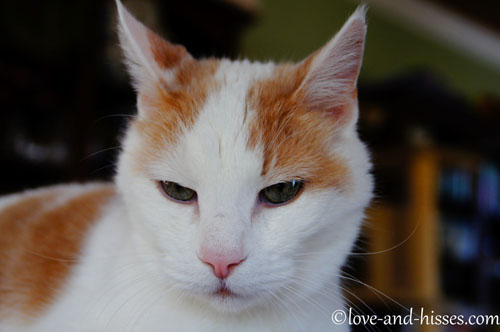 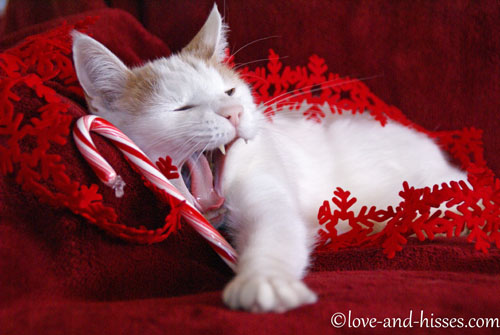 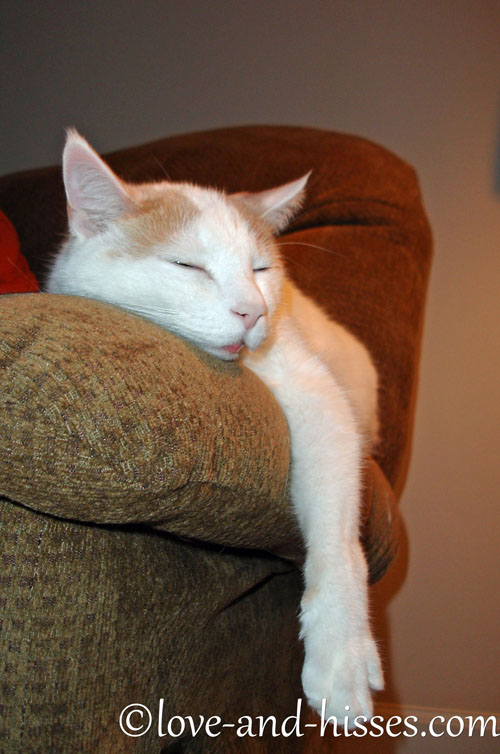 The whole fostering thing took him by surprise, and while he wasn’t thrilled when the fosters sought attention from him, he was a good guy and would (within limits) put up with their shenanigans. I can’t count how many times he’d wake up, see a kitten in the bed with him, and glare in another direction, disgusted. He never attacked a kitten, only hissed and smacked if his space was invaded. Kittens have to LEARN, you know. 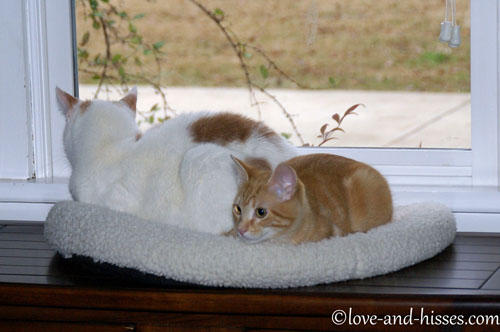 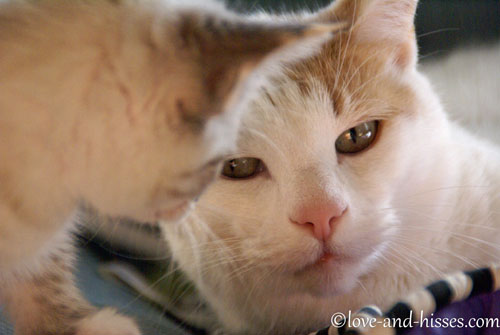 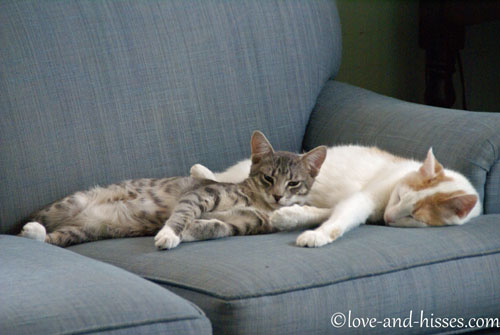 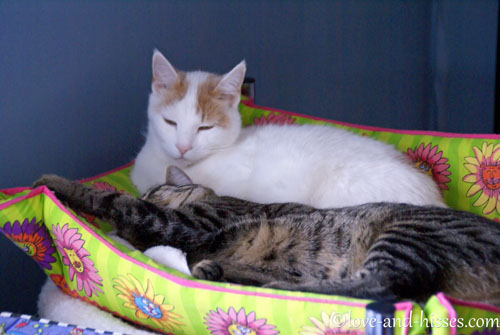 I don’t know, really, how to properly describe what a good boy he was. He was just GOOD, you know? Always happy, and never gave us a moment of trouble from the instant he became ours and we his. He was an integral part of our life for longer than we’ve been married, even. I can’t believe he’s never going to walk into the room, give me a bright-eyed head-twirl, and “WAOW!” at me. I imagine we’ll be seeing him in his usual spots – the cat bed on my desk, on the rug by the side door, on the couch in the front room, by the fence in the back yard – for a long time to come. 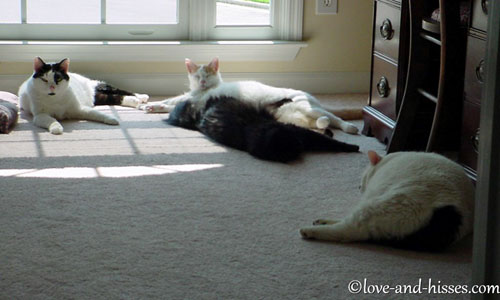 He was the last of what I called The Old Guard, the cats who came to us when we lived in our apartment, the very first home we shared together. He’s gone to join them now; it’s the end of an era. 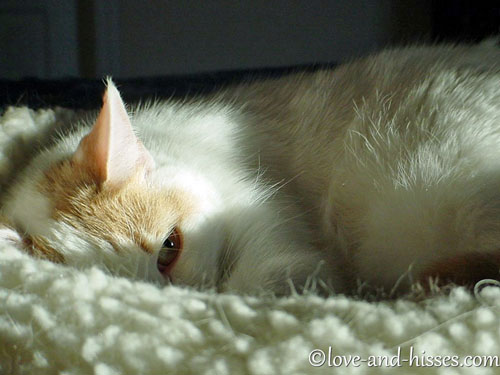 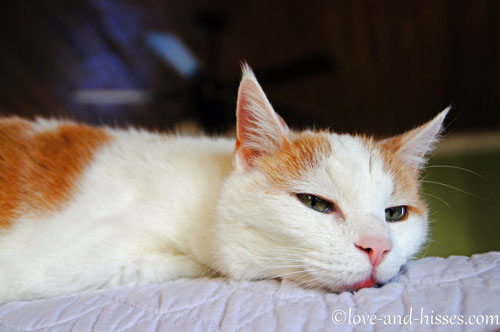 If you’re of a mind to, donations can be made in Spanky’s name to Challenger’s House, the shelter I foster for.

I’ll be back this weekend with plenty of sweet baby kitten pics. Please check your sugar level before you check the site this weekend; I don’t want anyone fainting from the sweetness of those babies.