For those of you who bought the Anderson Kitties calendar for 2017, you may have noticed that I flaked on including the cat’s name on each month. So on the first post of each month, I’ll let y’all know who you’re admiring. And even though I included the names on the foster kittens calendar, I’ll post that picture as well. So February’s calendar boys for the foster calendar are… 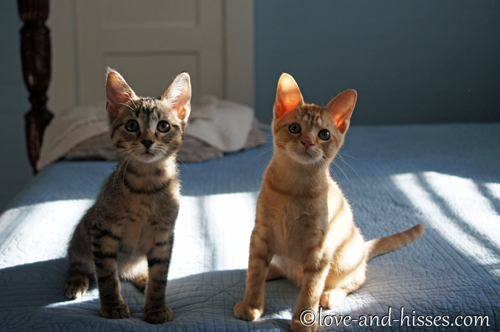 Speaking of the calendars, I’ll be taking the link out of the sidebar when I get around to it (and knowing me, that means sometime in August), so if you were wanting to order a calendar, now’s your chance! (You can pick the month that the calendar starts.)

I was sitting at my computer the other day and spotted something out the window. Do you see it? It was an Archie in the poltergeist tree. He stayed up there for a while, and eventually came down.

That tree is so easy to climb that I’m surprised the cats don’t climb it more often. I’m not a tree climber, but I think (given a little stepladder and maybe a push) even I could climb it.

The first time I saw a cat in that tree was back in 2007, when we’d just moved into this house. I walked out into the back yard, spotted Newt – asleep – and it startled me so much I gasped. Then, in 2009, Newt ran up the tree and Joe Bob got so excited he ran up after him.

(Answer to “Why is it called the poltergeist tree?” here.) “I’m not climbing any trees, so don’t even suggest it, lady.”