I hope you’re all having a wonderful day. I cut and paste the following every year because although they are recycled words, they hold 100% true – you guys are the best, and I appreciate you so very much. Thank you for coming back here to read and comment or lurk – and for some of you (a lot of you at this point!) for adopting kittens from us. It’s been a great, kind of crazy, and sometimes sad year, and I hope 2020 is a little calmer (but not TOO calm) with no losses for any of us.

I’d most likely keep this blog going even if no one was reading (for one thing, I don’t know that I’d ever be able to remember when certain events happened without this handy blog to serve as my diary), but you guys make it so much better, so thank you from the bottom of my heart. …and have a warm, safe, happy holiday season and a wonderful 2020!

Frankie! It’s a fairly understated design, I know, but I love the way the wreath was hanging behind him, and he couldn’t possibly be any cuter. I considered photoshopping a Santa hat on his head, but I think it’s pretty perfect as is.

In case you missed it yesterday, the scanned holiday cards I’ve received so far can be seen here, or you can scroll through them below. 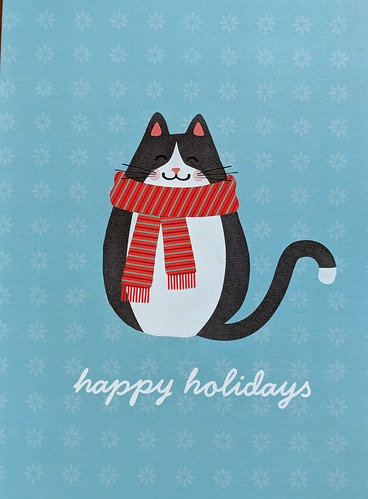