The “smell” of warm kitties lying in the sun always reminds me of my Atticus. I bet Gabrielle and Luc smell just as wonderful! (Is that weird? But you know what I mean, right? Right?!)

Brigitte said: Yes! Kitties all have a wonderful “new kitty smell”, same as human babies do. Yummy. Wanna feel better? Stick your nose in a kitten’s tummy and snort.

Brigitte is correct, kitties have a wonderful smell. When they’re little, their smell reminds me of boiled peanuts. As they get older, they smell a little more like sunshine (even if they’re not lying in sunshine).

Squirrels are so entertaining, except for when my cats bring in a dead one. It does not happen very often, because they are too smart, and I think they only catch sick ones ore extremely dumb ones. But at a certain time of year I get dead chipmunks every day. You think they would learn not to hang out in out cat-fenced yard – the bunnies have learned and so have most of the birds.

When my parents were visiting in the spring, the cats brought at LEAST one dead chipmunk a day into the screened porch. Luckily my father’s not squeamish – but I didn’t particularly intend for them to come visit and then have to clean up dead chipmunks every day! (And chipmunks, bless their adorable little hearts, have got to be the dumbest animals alive. Why they gotta be in our small back yard when there’s SO MUCH outside the yard where cats don’t roam?)

Wasn’t it one of your cats who turned their cone into a cape? I remember that somewhere… Perhaps the other two think she’s wearing her cape wrong? 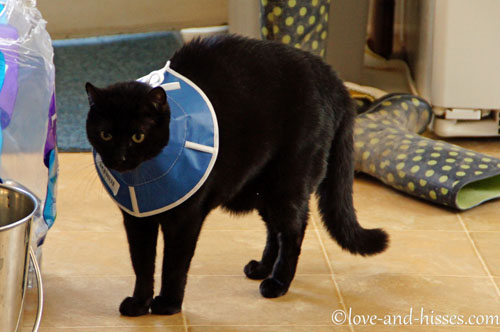 He had a spot on his neck he wouldn’t leave alone, and the vet gave us a soft cone to put on him. It made him miserable and got in the way, and at some point he managed to get it pushed back like a cape. It worked well enough to keep him from messing with the spot on his neck, and didn’t get in the way as much, so we kept it that way.

I actually tried turning Fleur’s cone so it was like a cape, but she’s got those stubby little legs (she hasn’t hit her lanky stage just yet) and it wasn’t tripping her up exactly, but it was getting in her way, so it went back to being a cone.

I’m so sorry to hear Fleur’s not well, but it makes me wonder: How many other foster parents have their foster kitties get sick so they can come “home?” You seem to have had quite a few who have figured out that if they limp, start vomiting or get the runs they get to go back to you. Although Fleur has taken this to a completely unnecessary extreme. That little muffin head better get well fast. And how lucky is Gabrielle to get included in the homecoming!

I wouldn’t say it’s common to have that happen, but it’s not unheard of, either. And I’m not the only foster mom it’s happened to, I swear it! (If Tommy were still around, I’d blame him for putting the idea into the fosters’ heads!)

Luc doesn’t seem to miss his litter mates,right? Course,how could you tell, you take such good care of him….but no noticeable missing the others?

He didn’t seem to be missing them specifically, but he did miss having a playmate. By the time Fleur and Gabrielle got back here Monday night, Luc had convince Jake and Newt to play with him a little. Look how close Alice let Luc get to her the other day! I mean, first she was a little hissy-growly name-cally toward him, but then the warm sun and the fact that he really wasn’t trying to TOUCH her wore her down, and she just ignored him. Luc’s got an opinion.

I was meeting people at Petsmart Wednesday evening so they could pick up stuff they won at the auction, and since Luc is going home this weekend (yay, Luc!) I decided I needed to try to get him at least a little accustomed to riding in the car and being around people. So I put him in his carrier and took him to Petsmart with me. He wasn’t thrilled with the experience, but he handled it pretty well. (I would ordinarily share pictures of him in the carrier at Petsmart, but I actually didn’t take any!) Gabrielle shows off her impressive Ears of Annoyance. You know I had to get a few shots of them together. Luc cracks me up when he puts his paw up to touch the feather teaser, when the teaser is nowhere near him. Newt finds the Target Ski Chalet to his liking.