That is SO CUTE! I sure would like to see something like that going on around here. Not that I’m holding my breath (the cats can’t get where the chickens are, and the chickens avoid the cats on the occasion that they get out of the back forty), but I can dream, can’t I?

Robyn – saw this and thought of you….

Um, how many pillows does Fred sleep with? 😀

Fred sleeps with a LOT of pillows! There are six on his bed, and I’m pretty sure he uses ’em all!

As long as the cats behave themselves, they’re allowed in his office. The other day, he had to shoo all the kittens out of his office because it was like, as he said, “A hurricane of a**holes.”

You know, Miss Carmela is the spitting image of her Mama.

She certainly is! I need to get a picture of the two of them, sitting side by side.

So I followed the “Good thing for him he’s so cute, I suppose” link for previous posts, and I have to say, I laughed my fool head off at “antics of one Sugar J. Buttocks”. Sugar J. Buttocks!!! 🙂

For some reason, when I expand any of the cats’ names, I utilize “J.” as their middle initial. I don’t know why, and I don’t know what it stands for, but that’s the fallback (and also, Sugar J. Buttocks has outgrown his kittenish antics.)

Just came across this game of Kitten Whack-a-Mole. Soo cute and I can just picture the Sopranos enjoying the game…that is until they grew too big.

Just went looking for mink tails/toys and found this on Etsy. She’ll even custom-make items on request!

That is so cool! She’s got toys made out of rabbit fur, also. I might have ordered a few things!

Is it me, or does it look like Paulie is really a white cat that someone swiped down the back with a big ol’ paintbrush full of marmalade colored paint?

That is a REALLY good description of how Paulie looks! I’ve thought that he looks like a white cat wearing an orange “horse blanket” type of garment, but I like the swipe of paint description better.

I’d like to know how he made that. I have a window bed that keeps collapsing, and it’s too bad because it’s crazy popular.

I was going to do a quick and easy explanation of how Fred made the window bed, but when he started telling me about it, I found that it’s actually a little more complicated than I’d realized, so I’m going to promise that in one of next week’s posts, I’ll explain it with a closeup picture of the window bed so that it will hopefully make more sense. If I don’t get it posted next week, someone feel free to remind me!

I’ll be leaving here in a little while to pick up the Sopranos kittens at the North Alabama Spay Neuter Clinic. It was so quiet around here yesterday without them running around being their usual wild, snuggly selves. I had a ton of errands to run after I dropped them off, so I didn’t make it back home until almost noon. While I was gone, Fred opted to let Livia have access to the downstairs, and he took a picture of what she was doing at one point. 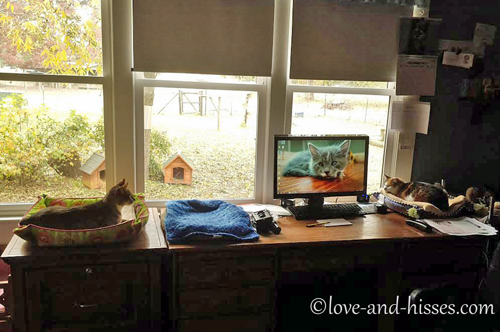 That’s Livia on the left, giving Alice Mo (on the right), the evil eye. She might have stalked Alice and Miz Poo and Jake a little, but Fred reported there were no fights, so that’s good. I did insist that she be put back upstairs for a couple of hours after I got home (she was starting to get growly), but then we let her back out again and she (mostly) behaved herself. Until she didn’t, so we put her back up. She seems okay with most of the cats except for Alice and Grandma Poo, I’m not sure what her issue is with them.

(And yes, that’s Hook – formerly Puff – on my monitor. This picture. I just love that picture so much!)

Bev – from the clinic – reported that the kittens were being very vocal and chatty, so I guess we can chalk that up to being a family trait, can’t we? They’re usually fairly quiet when they’re here (I mean, aside from the sound of their running feet). 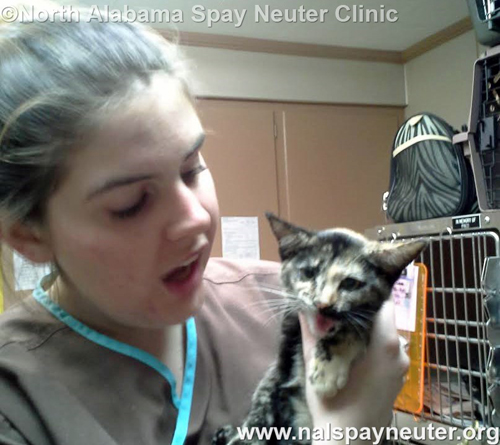 Adriana and Sarah, singing a duet. 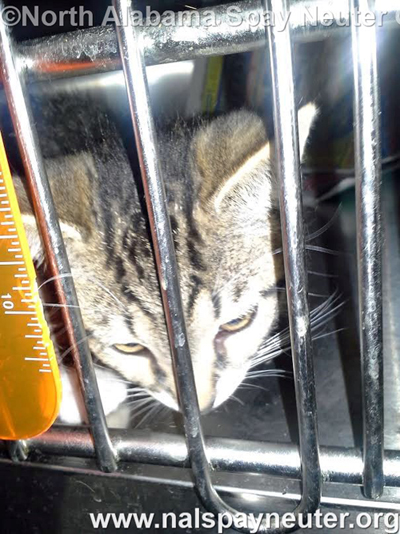 “I didn’t do it! Someone call my lawyer!”

So now the boys really will be…singing soprano. (Bah DUM bum!)(SO amused by myself.)

Speaking of the North Alabama Spay Neuter Clinic, they’re trying to get their transport program started! They need carriers and crates – go read more about what they need here, and you can see their Amazon wish list here. (I’ll be mentioning this again in the future, so get used to seeing it! 🙂 ) 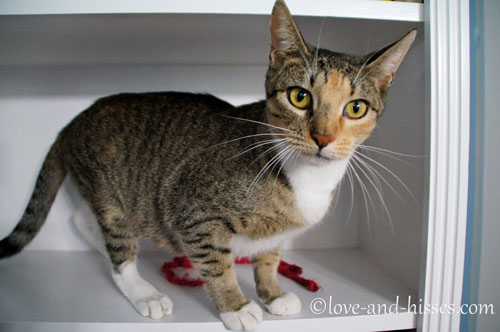 Livia is just a bit too big for the empty shelf on the bookcase. Also, she’s big enough to confidently jump down to the floor from there, so no Glamour shots for her! 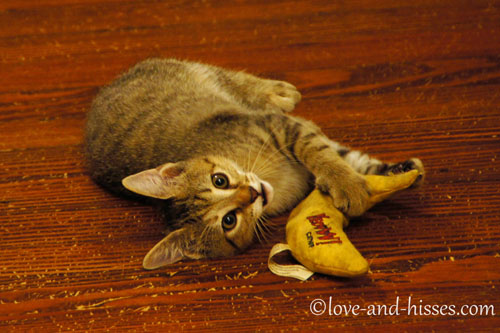 Carmela is just a little ‘nip fiend. She LOVES the catnip nanner. 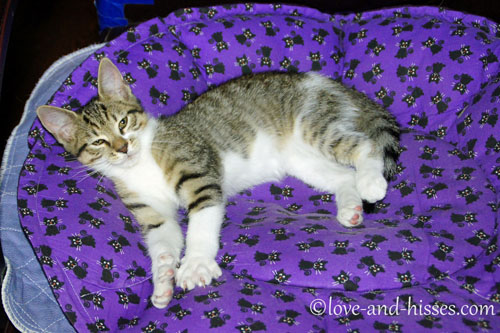 Silvio wasted no time in claiming Fred’s chair as his own. Silly, smug little man (Silvio, that is. Not Fred. Ha!) 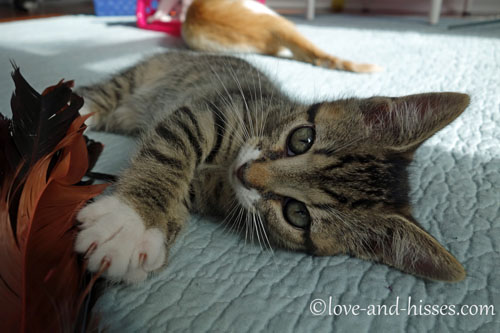 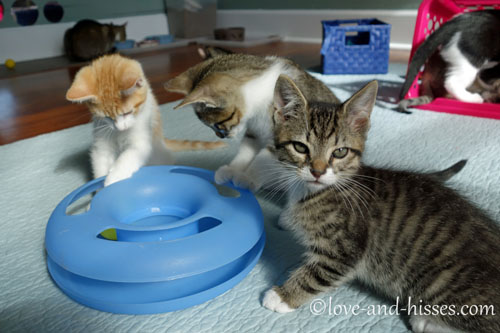 “We havin’ a strategy meetin’, lady. Did I mention that you should go ‘way?” 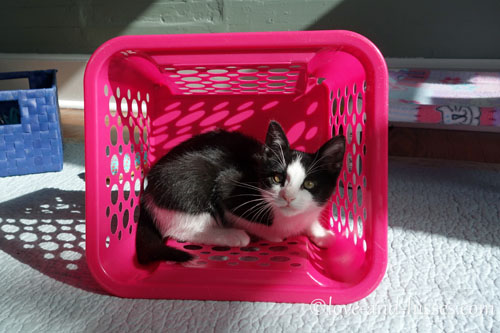 Meadow in the plastic box… 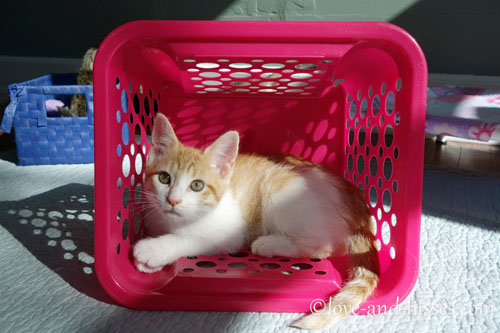 And Paulie in the box. They like to hang out in that thing for some reason. 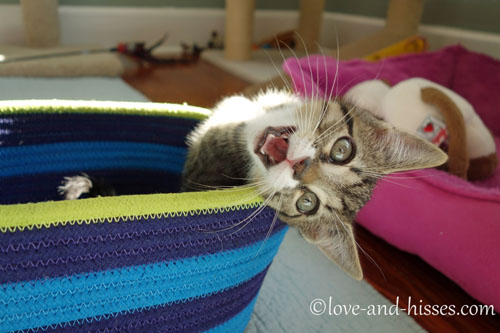 “HELLOOOOOOOOOOOOOO!” (When I typed that, I heard it in my mind like this, if you’re curious.) 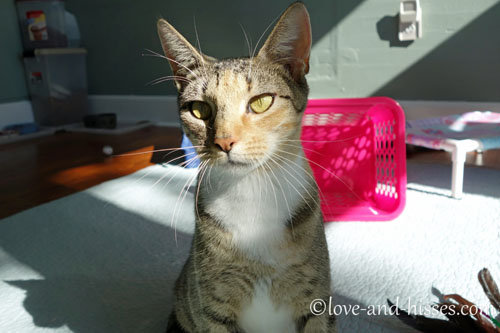 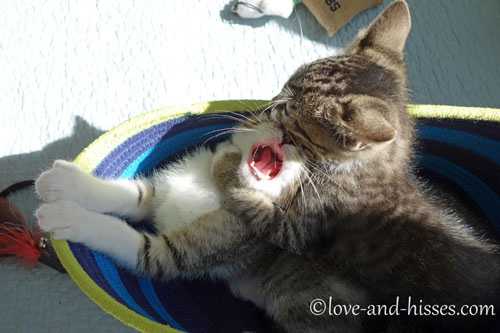 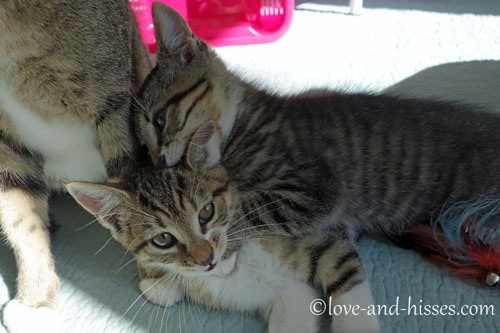 And Tony bites on Silvio. 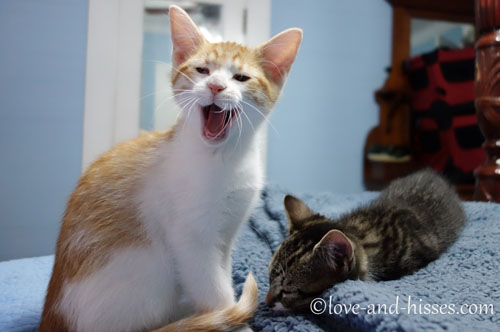 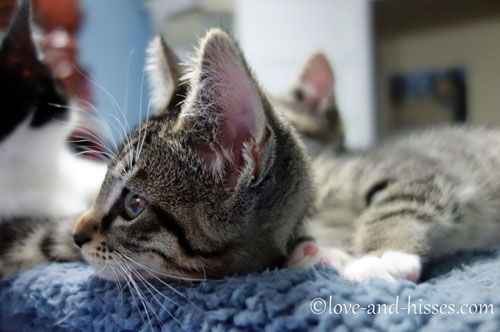 Melfi’s keeping an eye on Tony. He’s prone to biting unexpectedly, and she doesn’t like that nonsense. 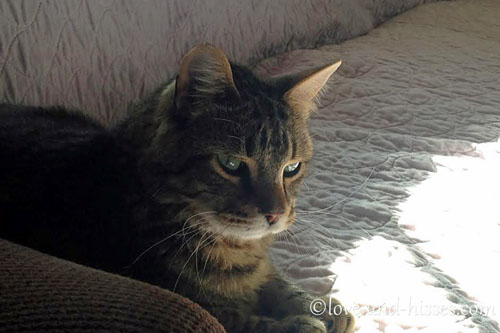 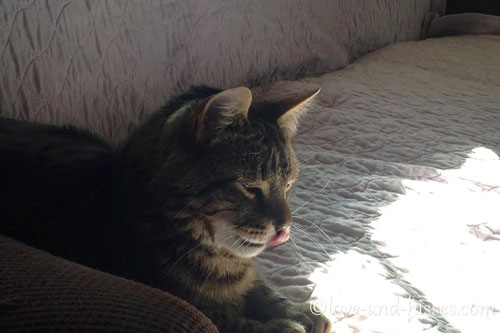