In case you missed it on social media yesterday, these girls are ADOPTION PENDING. Since there’s no point in them being at Petsmart now that they’re spoken for, I brought them home with me. They’ll be with us for a few weeks until they can go home. Gabrielle gave me a smile before we left Petsmart. When I let them out of the carrier, Josephine stomped right over and sniffed noses with Frankie. Frankie shrugged, rolled his eyes at me, and continued along his way.

While they’re here with us, they’ll still go into the foster room at night, to give the permanent residents a break, and then Fred will let them out when he gets up at whatever ridiculous time he gets up (generally 3:30 or so.)(I myself am NOT up at 3:30, thank you.)

So you’ll get to see those faces for a while longer, and I know we’re all just SO SAD about THAT. 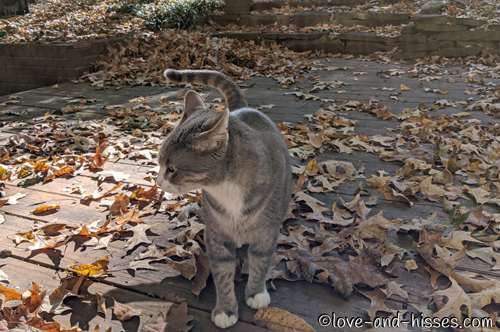 Archie was so happy to see them again that he put on his very special Ears of Annoyance.