I am almost positive that I’ve seen some very faint belly movement. I haven’t been able to capture it on video yet… but you know I’ll keep trying! “You talkin’ about my belly again?” Keeping an eye on the back yard. From above. She is so CUTE.

So, I bought this big cat pillow at Aldi some point after Christmas – it was marked down from $15 to $11, and I could just imagine how cute it would be to have fosters curled up asleep on it. But first Moira and then Canasta had ZERO desire to have ANYTHING to do with it. I don’t think either of them went near it, it was like it didn’t exist to them. So I put it on the bed in the guest bedroom, and it has been THE MOST POPULAR bed in the entire house. One day I was downstairs and I could hear Archie complaining LOUDLY (when Archie is perturbed, he has a very loud, carrying voice), so I went to see what was going on, and found that SOMEONE was in the bed Archie thought belonged to him. Newt was all “Tell him to shut up. I’m tryin’ to sleep here.” Charlie spends a lot of time on the bed, too. 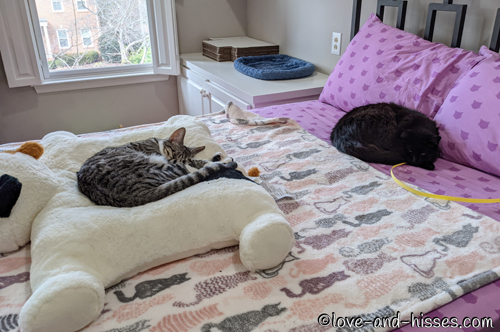 So in summary: the cat pillow is a big, big hit. If I’d known how popular it would be, I’d have bought more than one (although now that I say that, I think this was the last cat pillow in the box. Though I don’t guess the cats care whether the pillow is a cat or a dog or whatever.) Of course, if I’d bought more than one, they wouldn’t have liked them, because: cats. (Last time I went to Aldi they were all gone, so it’s a moot point now.)