I want to put the sad news up front so y’all aren’t blindsided: on January 10th, Rickles (from the Fools litter) passed away. He had a normal day, and in the afternoon was found curled up, still warm, but gone. His family is devastated, and his sister Roseanne misses him, too. Our hearts go out to his family as they mourn that wonderful boy.

I thought I would post some of Rickles’ sweet baby and toddler pictures, and I have some pictures of both him and Roseanne after they were adopted that his family was kind enough to allow me to post.

Rickles – and Roseanne, Belushi, Shecky, Louis, Gilda, and Skelton – were born here on April 1, 2015, kittens to Lucy (Lucille Ball). Since they were born on April 1st, everyone was named after comedians, and we called the litter “The Fools.” He was a beautiful little charmer, right from the beginning. Knew what he wanted, and went after it! (1 month old) “HUGS!” I loved this picture so much (as did y’all) that I made it into a banner.

Rickles (with Belushi and Carlin in the background), from Lucy’s Fools. Another of my favorites – I still use this as my desktop background sometimes. 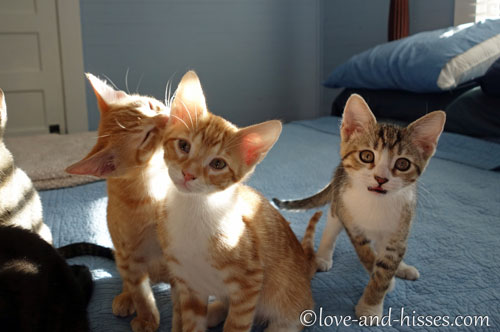 With Roseanne (right), and Louis cleaning his ears. Third from left, with all his siblings. (Let’s see, can I do this from memory? From left: Gilda, Carlin, Rickles, Shecky, Roseanne, Louis, Skelton & Belushi. Yep, still got it!)

Of course, Rickles was the star of our most-viewed video ever, Kitten Gone Wild:

Rickles was adopted by a wonderful family – and we were thrilled when they came back and adopted Roseanne, too! Here they are in their forever home. Michelle said: He was a cat full of personality and made us laugh often. His favorite place was looking out the window or curled up next to his sister Roseanne. He loved belly rubs and would lay down and pick his back leg up to get them. He was loved so much and his death was devastating to our family especially our youngest son, Evan. He will be greatly missed and our home feels empty without him.

Michelle, thank you so much for allowing me to share your pictures. Our condolences to you and your family (and Roseanne), we know you miss that sweet boy terribly.