Mimosa has been super irritated with the kittens recently, because they WOULD NOT leave her alone. They were constantly bugging her, trying to nurse, and she’d get up and walk away, then they’d swarm her again. As I mentioned in yesterday’s post, there are a few up-high spots where she can get away from them, but when she takes advantage of those places, guess what the kittens do? They sit on the floor and howwwwwwl up at her and howl and howl and howl. (Just a side note: a “super irritated” Mimosa is still pretty mild. She would growl and hiss at her kittens, but never swatted at them. An annoyed Mimosa is calmer than Archie on his happiest day.)

Finally, yesterday morning, I got out a onesie and put it on her, thinking that if the kittens couldn’t get to the milk bar, maybe they’d give up. If you were around last year, you might remember that I put a onesie on Canasta in the couple of weeks before she was adopted so that her milk would dry up. As I recall it, Canasta’s kittens didn’t even really notice the onesie. 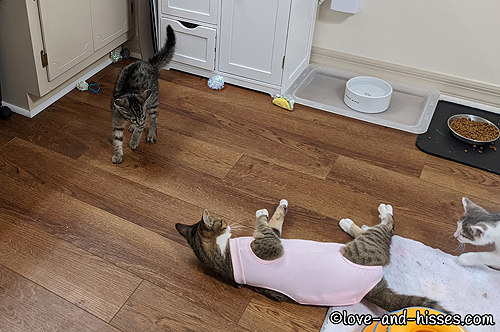 We’ve replaced our regularly scheduled Mimosa with this sack of potatoes. Let’s see if anyone notices! 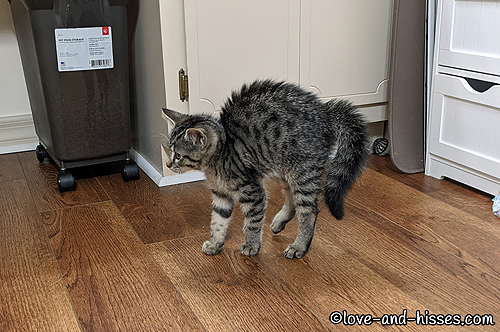 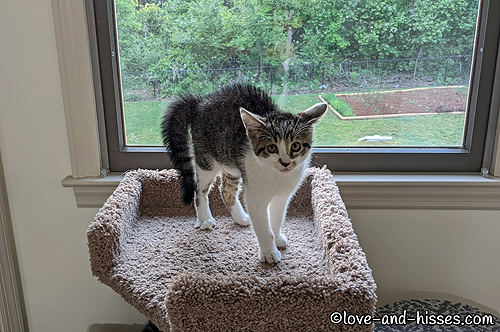 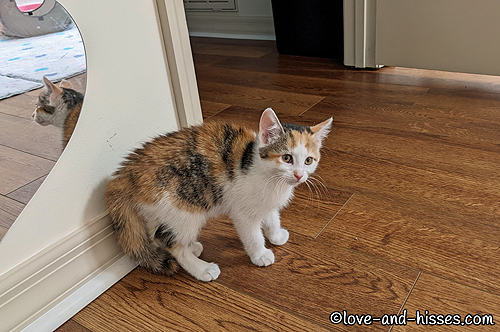 They walked around in their floof suits for about an hour before they calmed down. I don’t know if the smell of the onesie (it was brand new, straight out of the package) bothered them, or if the fact that Mimosa was moving strangely was the trigger, but they were 100% NOT HERE FOR THIS NONSENSE. (I actually got a video, which is posted down in the “social media” section.) 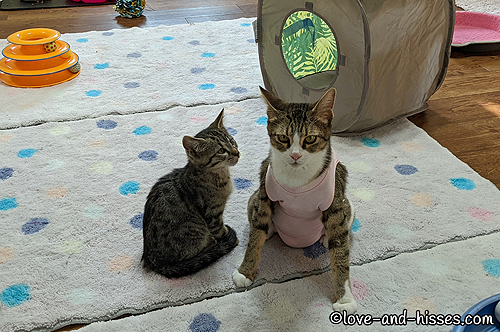 Mondo – who was the MOST floofed and MOST hissy – was the first to calm down. “It’s just not very fashion forward, Mama.” 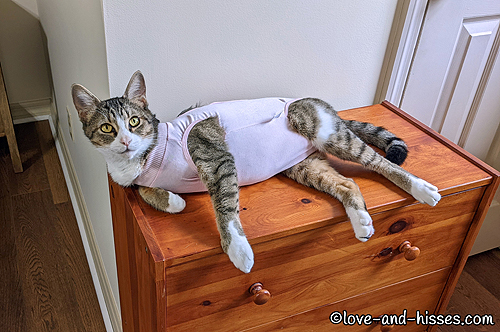 Not that it matters, but good lord this onesie is unflattering. She really does look like a sack of potatoes. But she doesn’t care. 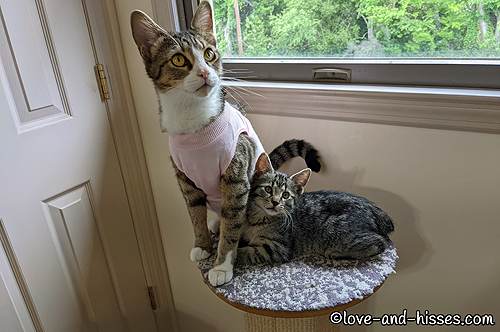 Mondo’s all “Maybe we put a ruffle on the butt or something?” 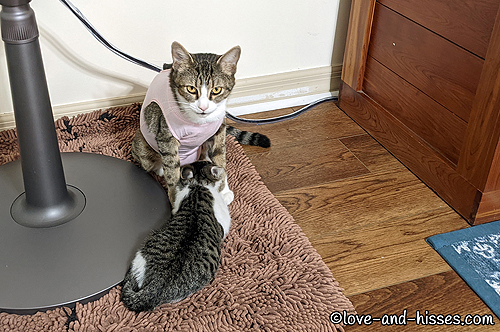 Bramble said “I swear there was a milk bar around here SOMEWHERE.” 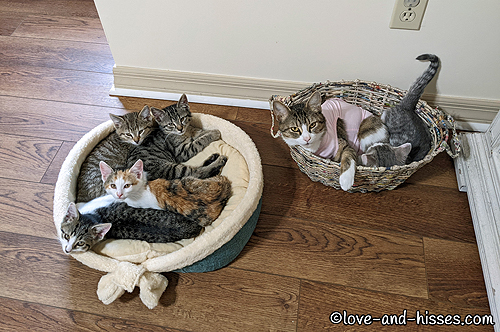 The kittens were off playing, and Mimosa climbed into that basket for a snooze. Then the kittens climbed into the bed for their own snooze, except for Kudzu who had to double check the milk bar situation. 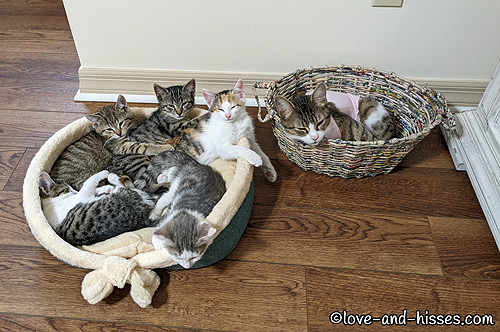 Upon finding no milk bar, Kudzu joined his siblings and everyone napped.

Mimosa’s not in the onesie all the time – I took it off her for about an hour last night, and will give her more time this morning and again tonight. She doesn’t mind wearing it – I mean, she doesn’t LOVE it, but it doesn’t bother her much – and while the kittens are still swarming her, once they realize there’s no milk bar access they’ll cuddle with her a bit and then wander off. Mimosa seems less irritated with the kittens, too, though she’s still going to her mama-only spaces for long snoozes. So the onesie is working out well! 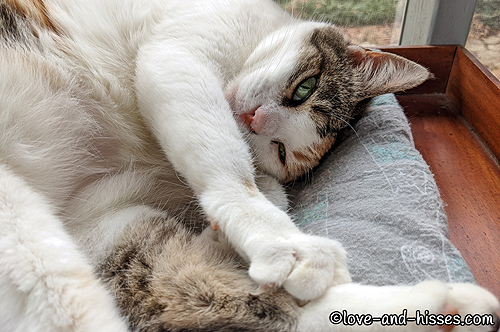 Alice Mo has the PRETTIEST eyes. 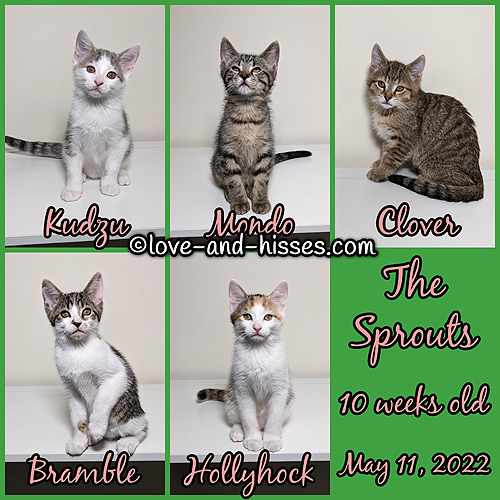 These babies are TEN WEEKS OLD! They’re scheduled for their spay/neuter surgeries in 3 weeks. If you’re interested in seeing their weight progression, you can see the spreadsheet right here. Interesting that Mondo started out the largest and stayed that way (though occasionally one of his brothers outweighed him), and Hollyhock is still tiny but mighty! 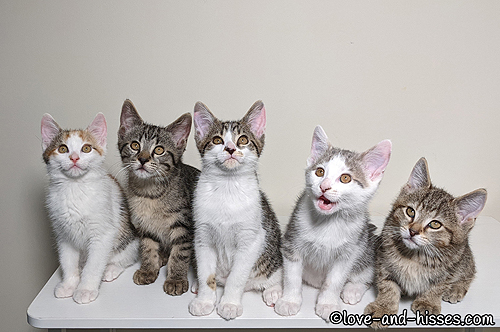 Line ’em up! Left to right: Hollyhock, Mondo, Bramble, Kudzu and Clover.⁠
⁠
NEWS: We have an adoption pending on Bramble & Hollyhock (together). They’ll go home after their spay/neuter surgeries (which is happening June 1st.)⁠
⁠
We have an application on Mimosa; I haven’t gotten word yet whether it’s been approved, but fingers crossed!

YouTube link
Hollyhock’s feelin’ a little crazy, and Bramble is ALL IN. 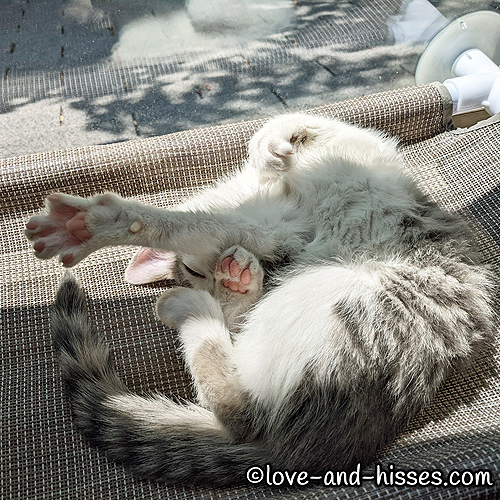 Kudzu’s feelin’ good in the sun.

YouTube link
The kittens have been driving Mimosa absolutely nuts, constantly trying to nurse. A girl can only get up and walk away so many times, so she’s been hissing and growling at them and being frustrated. I had the idea of putting a onesie (or weansie, if you prefer) on Mimosa, thinking that if the kittens couldn’t get to the milk bar, maybe they’d leave her alone.

I had no problem getting the onesie on Mimosa. She tried walking and immediately toppled over onto her side (this is a normal reaction; she got over it in about 20 minutes). The kittens, on the other hand, reacted by putting on their floof suits and hissing.

Their floofing and hissing only lasted about an hour. They’re puzzled by the fact that they can’t find the milk bar, but mostly sniff around and then walk away. Mimosa seems less frustrated by them, so I’m going to leave the onesie on her for now.

(She won’t wear the onesie 24/7 – I’ll take it off for a while in the morning and in the evening. I’m hoping this will only need to last for a few days, and then the kittens will forget about the milk bar. I don’t think that’ll really happen, but a girl can dream, right?) 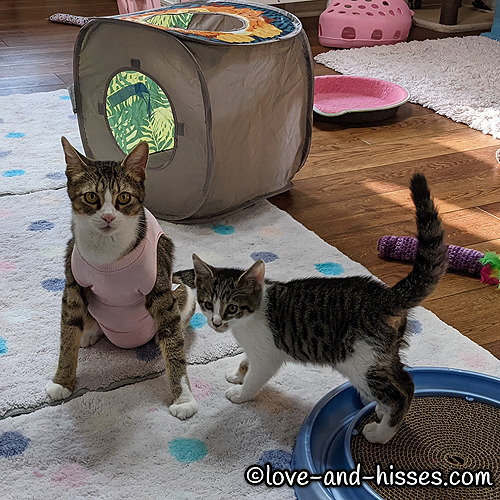 The kittens are getting used to Mimosa in a onesie, but wonder if I couldn’t have found one that made her look less like a sack of potatoes.⁠ 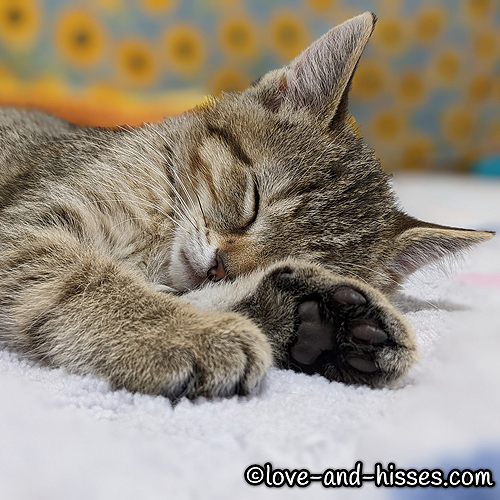