I’m sorry to tell you that yesterday, we said goodbye to our wonderful Miz Poo. She started going downhill the end of last week. I hoped that she’d rally as she has so many times before in these past few months. But it wasn’t to be and it was clear that it was time to let her go; she was ready even if we were not. Her passing was calm and peaceful (she’s never been scared to go to the vet’s office) and as she left us I told her repeatedly how much we loved her, and that she was the best good girl.

We buried her in the back yard, in the spot where she liked to sit and watch the birds.

The rest of today’s post is edited from her permanent resident page. I’m having a hard time finding the words and so I’m cheating a little.

Miz Poo would have been 16 in September.

I first saw Miz Poo when she was about six weeks old. I saw her and fell in love with her, but at the time we had four cats and Fred was dead certain that adding another cat to the house would make us the looniest people in the state.

So Fred said “no” and I stomped and pouted and pouted and stomped, and when we got home I started with the begging and pleading. I finally wore him down and he agreed that I could adopt her, but then I second-guessed myself. I worried that maybe we just didn’t need another cat, that the boy cats would pick on her, that I should just be happy with the cats we had. I decided that he was right, and put her out of my mind.

Then a few weeks later, it was the day before Thanksgiving. My daughter had half a day off from school, so we went out to lunch and we were going to go to the movies. Only, when we got to the movie theater the line was really long, and I said “Hey. Let’s go visit some kitties!”

I absolutely knew that the kitten I’d fallen in love with would have been long adopted and wouldn’t be there, but when we walked through the door, she saw me and started howling her little head off. I carried her around and snuggled with her and she sneezed in my mouth (which was not the last time BY FAR that that would happen). I was going to put her back and asked Danielle if she was ready to leave. Danielle said “Can’t we keep her?” and I said “Um… OKAY!” 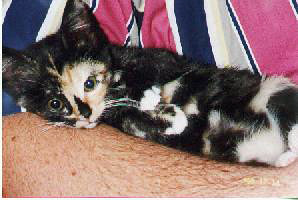 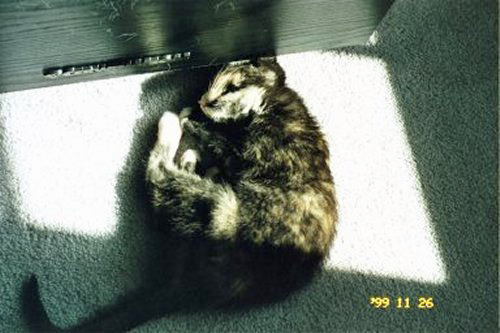 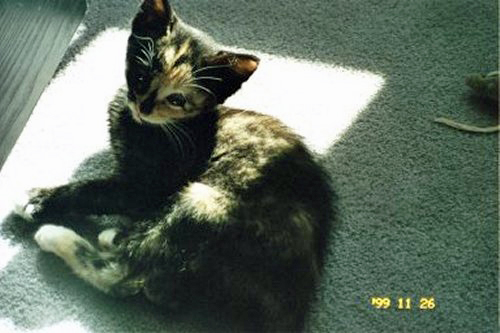 For the first few weeks she wasn’t playful at all because she had an upper respiratory infection. But once she got over that, she was your usual playful kitten. She was okay with the other cats (might have even snuggled with them), but her heart’s always been with her humans. She slept with me and did every night of her life (except for the times when I’m out of town) until late last year; she’d perch on the pillow next to me and put her paw on me, and purr and purr and purr. If I got one of those baby carriers and strapped it to the front of me and carried her around in it 24/7, that would have been absolute nirvana for her.

We were going with an “S” naming theme at the time, so we ultimately named her Scrappy. I called her “the kitten” until she was a year old. I’m sure she had a thousand nicknames, but eventually she became Pooh and Pooh-pie and Pooty McPooterson and that all morphed into Miz Poo at some point, and it stuck. 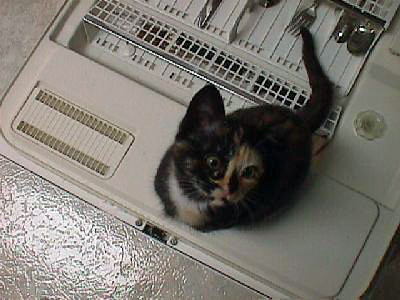 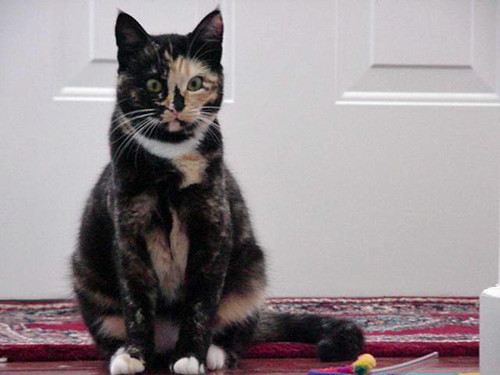 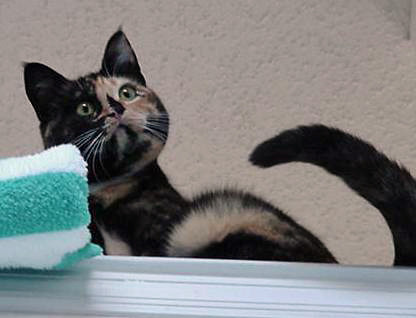 She thought all humans were wonderful. If you were a person, she was willing to love you with all of her heart. Anyone who’s been to our house before last weekend knows that Miz Poo would greet them with hopeful eyes that said “My god, can I come home with you and be your best friend? Save me from this house of kittens!” It didn’t matter if she’d never seen you before – if you sat down, she’d hop into your lap. She was the one cat in this house who’d never met a stranger and wholeheartedly loved absolutely everyone. She had a lot of medical issues earlier in her life. Several years ago, she had a blockage (a large amount of hair being the cause of it) that almost killed her. After the operation for that, she had a huge incision on her tummy that then got infected and needed a drainage tube and took her forever to heal from. She had an issue with a rodent ulcer on her upper lip that would pop up out of nowhere, and her upper lip would get hugely swollen. Nothing but steroids ever fixed that problem (luckily, in her last few years she outgrew the problem). She was an overgroomer and would lick her belly bald (also something else she outgrew). No matter her medical issues, no matter how she was poked and prodded at the vet, she was absolutely the sweetest girl and never stopped purring for one moment. 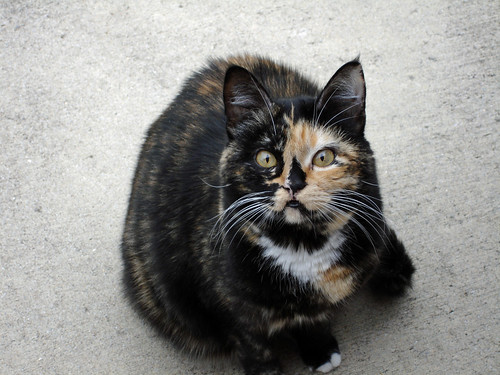 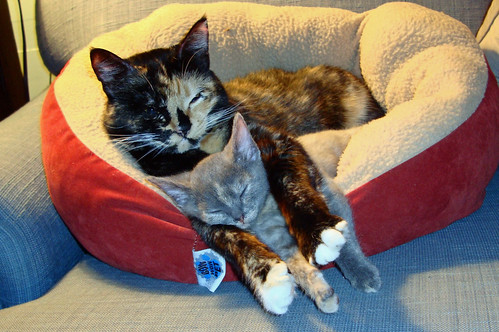 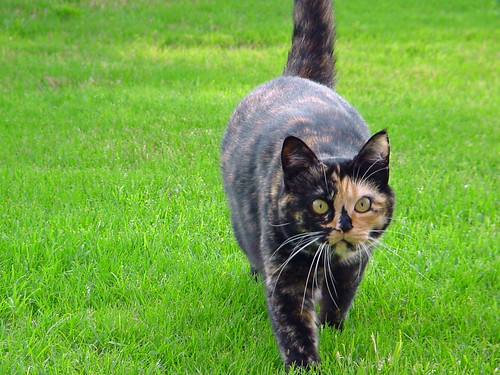 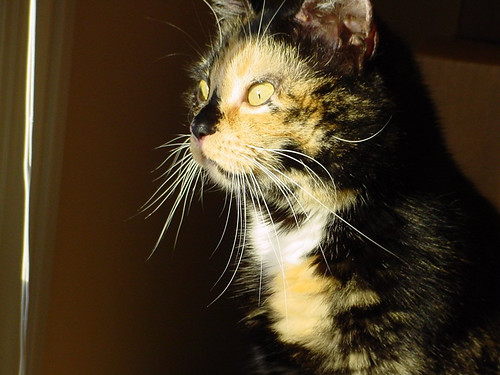 This was how you knew Miz Poo was feeling fine: she picked up a toy and carried it through the house, keening at the top of her lungs until she found a person, whereupon she put the toy down and looked very smug about it.

In her later years, she put up with the fosters with patient resignation, and if she woke up and found that one of them was snuggling with her, she didn’t lose her mind too much. But she was also willing to bring out the Paw o’ Doom when need be. She was no pushover.

As late as Friday morning, when Carlin got too close to her, she hissed and smacked at him. But then a few moments later he brushed up against her, and she purred at him despite herself.

Her entire life, Miz Poo was always happiest sitting on a lap or perched on a shoulder. She would probably have preferred to be an only cat, but as long as her humans gave her plenty of attention, she was happy.

She’s the very last of what I call “The Old Guard” – the cats we had before we started fostering.

She has been pure joy and love for the past almost-16 years, and it feels like the heart has gone out of our home. I’m grateful that we were able to have so many years with her, but I wish we’d had just a little bit longer. If you’re of a mind to, donations can be made in Miz Poo’s name to Challenger’s House.