Last week (or was it the week before?) Jean asked: How many years have you fostered, and how many cats have you rescued/adopted/fostered? And if you feel up to doing the math, how many unwanted kittens have you prevented from being brought into this world due to your selfless fostering? A grateful nation awaits.

I know. It calls for some higher maths, which you probably swore you’d never use when you got out of high school! 😀

I found this an interesting question because I had no idea exactly how many cats we’ve fostered over the years, though from time to time I’ve wondered. So I sat down and figured it out. I even made a spreadsheet so I could get a total number as well as how many were males and how many were females.

The year we started fostering: 2005 (May 19, to be exact).
The total number of cats we’ve fostered: 125
How many females: 60
How many males: 65
The number of our fosters we’ve adopted: 5 – Tom Cullen, Sugarbutt, Joe Bob, Stinkerbelle, and Kara.
The largest litter we’ve had: 7 (The Seven)
The litter size we’ve had most often: 4. We’ve had 9 litters of 4. Followed closely by 5, of which we’ve had 8 litters.
The most fosters we’ve had at one time (which is different from the largest litter!): 9. We had 4 Wonkas and 5 Cookies last Fall, and we have 4 Bookworms and 5 Rescuees right now.

I was really, really surprised to find that we’ve had more males than females – I honestly thought we’d had more females over the years!

The total number of fosters would be higher except that after we adopted Tom Cullen and Sugarbutt in the Fall of 2005, Fred made me promise to take at least 6 months off from fostering so that Tommy and Sugs would be older and thus less able to fight off any illnesses fosters might bring into the house. We ended up going almost a year before I decided it was time to start fostering again, and I brought that she-devil Maddy (our first bottle baby!) into the house in September 2006.

It’s impossible, of course, to figure out how many unwanted kittens we’ve helped prevent from being brought into the world. The number of litters a fertile female can have in a year (3), and the average number of kittens in a litter is 4-6. Fertile female felines can have kittens through their entire lives, so let’s say the average female cat lives 10 years (though they often live longer – sometimes much, much longer). 3 litters per year times 5 kittens per litter, times 10 years is… drumroll…150. And then let’s say that of that 150, half are females, who each go on to have their own 150 kittens, so that’s… 11,250. And we’re not even talking about the males, who can impregnate myriad females. I wouldn’t even know how to come up with totals for the males.

Let’s just say we’ve prevented at least 11,250 unwanted kittens from being born. And that’s just MY fosters. I’m not the only foster parent for Challenger’s House cats, and Challenger’s House isn’t the only cat shelter in this area, let alone the state. When you think about it, it’s kind of amazing that when we walk out of our houses, we aren’t seeing a flood of cats as far as the eye can see.

Because I know you’re totally fascinated by this topic (heh), you can see all my fosters, in order of fostering, and pictures of each litter right here! (If you consider Maddy and Maura – who were the only two cats we had who were “onlies” – to each be their own litter, that means that the Rescuees are our 31st litter!) 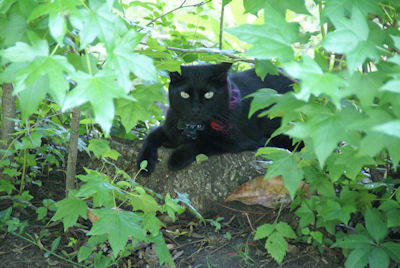 “This is where I hide when I’m overwhelmed by all those fosters.”