I’m sure you’ve answered this in the past, but what is the best way to “train” a cat to not jump up on counters, tables, etc.? My sister has a cat that is almost a year old (neutered) and he’s learning some not so good behaviors. I suggested that they use a can of air to spray towards the cat (not directly in the cat’s face), but wasn’t sure if there were other methods that would work.

I’m meeting the cat in person for the first time this weekend and have to confess I’m a bit excited. 🙂

Ricky & Bibi’s Mom said: Every cat is different, but I had pretty good results with a hardware-store pump spray bottle filled with plain water. I was always careful when aiming to avoid direct spray into eyes. And I kept the spray on the lightest setting.

This didn’t discourage ALL counter exploration, but it did keep Mazzilli off the counter and table while I was eating (Mookie wasn’t much of a counter explorer). Beyond that, I didn’t care, but you and others may care much more, so keep that in mind. If you want absolutely NO counter contact, this may not work.

Consistency is absolutely key. If I kept my spray bottle nearby, eventually all I had to do was lift it to where Mazz could see it and he kept his distance from my plate—and fork (my table was attached to my counter).

If I were trying to train a cat not to jump up on counters and tables (I’ve given up that fight… and ironically, the cats almost never go on the counters in the kitchen since we moved to this house. Maybe not caring is the trick?) I’d probably use a can of compressed air. Our cats are trained to the can of air so well that all I have to do is pick it up, and the cats cease and desist their behavior.

I’ve heard that cats don’t like tinfoil under their feet and people will line their counters with tinfoil to stop cats from prowling the counters. Also, they make scat mats that will beep – when we had a cat who would spray the front of a particular cabinet, we put a scat mat in front of it. It worked to keep the spray-er away from the cabinet, but kittens would almost always step on the scat mat and then stay there, looking puzzled because there was a loud beeping sound. (My concern about putting a scat mat on the counter is that a cat might step on it, be startled, launch himself into space, and fall a relatively long way down to the floor and then get injured.)

Anyone else got suggestions? Please chime in!

Considering the dramatic weather the South was having the past few days and the similar weather we had here in Ohio, have you ever had an instance where you needed to implement a duck-and-cover safety moment with your permanent residents and your fosters? We have a clowder in double digits and figuring out how to get them all to the basement and in safe places is not an easy task. So far we haven’t had the necessity for our plan, but I am always wondering how others might handle moving multiple fur-charges.

The only time we’ve had a serious threat to our safety was April 25, 2011, when we were fostering Maggie and her kittens. We lived at Crooked Acres, and at that time we didn’t have a tornado shelter. When the EF-5 tornado went by a mile south of us, I was in the hallway closet with Maggie and her kittens in a crate, frantically calling for the permanent residents to come join me. They didn’t (I don’t have any idea where they were.) And where was Fred? Oh, Fred was in the front room watching the tornado go by and yelling “Wow, come look at this!” (And like a dummy, I did.) (You can read about that experience here.)

After that, we got a tornado shelter in the garage (which was a detached separate building, and I think it’s on the verge of REALLY STUPID to have a tornado shelter so far from the house) and in the 5 years after we got the shelter, before we moved, we had the occasional bad weather and never once went anywhere near the tornado shelter.

We had no tornado shelter at the house in Huntsville, but never really had a serious threat in our three years there, either.

At this house, we have an in-ground tornado shelter in the back yard. I have looked inside it maybe twice. It’s old and it’s kind of musty, and if we were under a serious tornado warning I doubt I could be talked into going out there. I’d most likely hunker down in the center of the house with whoever we’re fostering at the time, frantically shaking the treats and calling for the permanent residents.

(If/when the tornados get us, you have my full permission to shake your head mournfully and say “They had a tornado shelter, but they’re so dumb they didn’t use it. Now they’re scattered all over Alabama. Tsk tsk.”)

How is Uncle Charlie? You haven’t shown any pictures of his beautiful face lately.

He was in last Friday’s post! I have a calendar with the permanent residents’ names on each date through the week so that I know whose “turn” it is to be the featured permanent resident in each blog post (this keeps it fair so that you see each permanent resident regularly; otherwise, I’m not sure I’d ever remember to post pictures of Dewey!) For some reason today’s square on the calendar is blank (I must have been distracted when I was writing in names), so you get a couple of random permanent resident shots.

Hi Robyn. Since you’ve been dropping facts about kittens (eyes, ears, claws), may I ask about tongues: are kitten tongues rough like those of adults? if not at this age, when do they ‘roughen’? Thanks.

I honestly can’t say that I’ve really noticed, even though I’ve been licked by many kittens – I think that they’re rough, but they’re also so much smaller than adult tongues that they maybe don’t seem quite as rough. A Google search has given me zero information (it’s entirely possible my search terms aren’t all that great), so if anyone has any information on this, I’d love to hear it!

Mama Mimosa is looking less like a wide load, lately. Have you weighed her recently? Maybe it’s the angle of the pic but when she’s sitting she doesn’t look as shapely.

About a week before she had her kittens, Mimosa weighed 13.75 pounds (6.24 kg). A week later (March 8th), she weighed 11.88 pounds (5.39 kg). Last night she weighed 11.25 pounds (5.1 kg). She’s definitely losing weight, but I’m keeping her well-fed in hopes that she doesn’t hit that super-skinny stage (but I think she will.) I’ll try to remember to weigh her again soon and we’ll see where she stands. But yes, she’s definitely getting smaller! 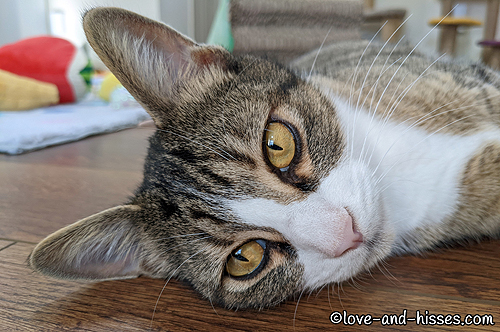 Mimosa, up close. She has such pretty eyes! 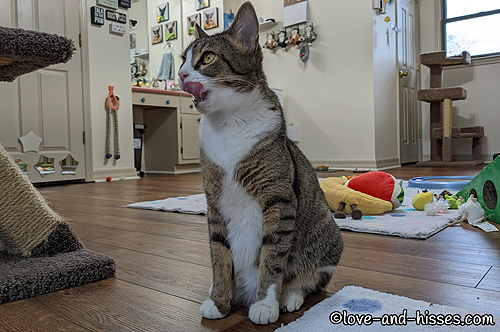 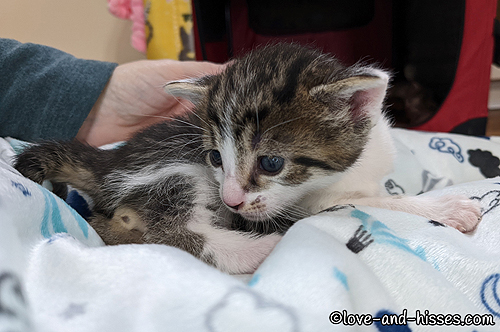 Bramble in my lap. 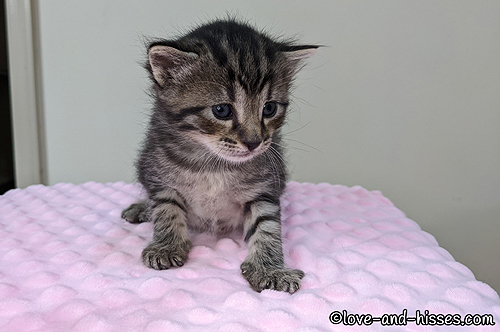 Mondo does not wish to properly pose for the camera, thank you very much. 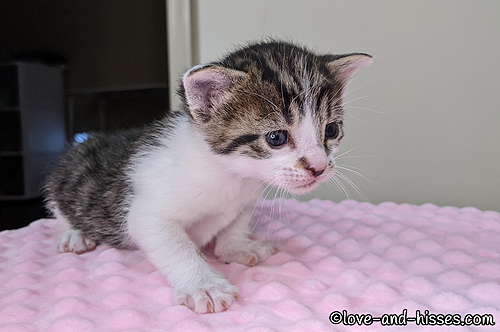 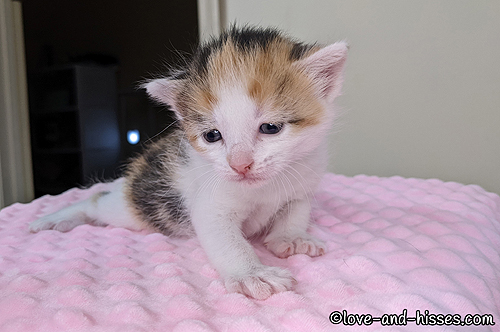 At least Hollyhock’s looking in the right general direction. 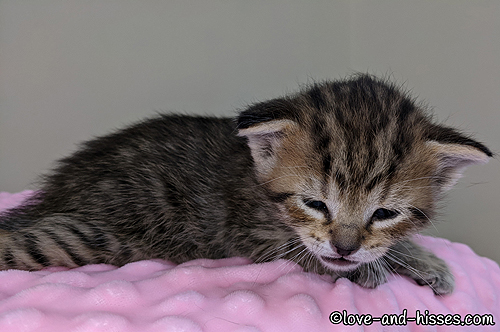 Clover has an opinion about me, and it’s not a nice one. 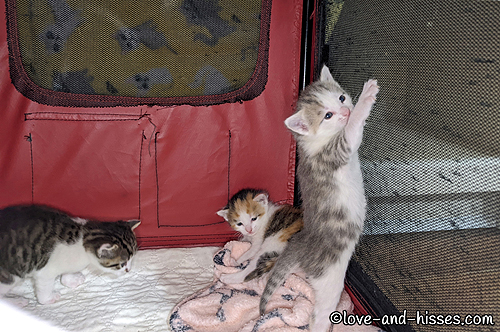 Kudzu’s ready to climb, it appears. 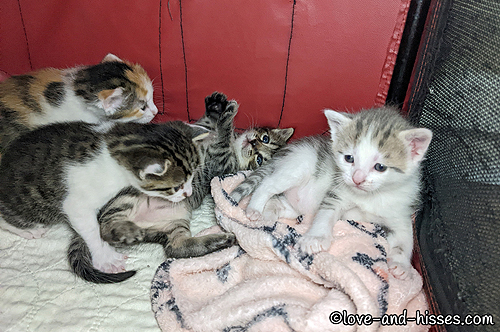 Mondo’s rolling around all “Everyone, look at my awesome belly!” Bramble, however, has his eye on Kudzu’s foot. 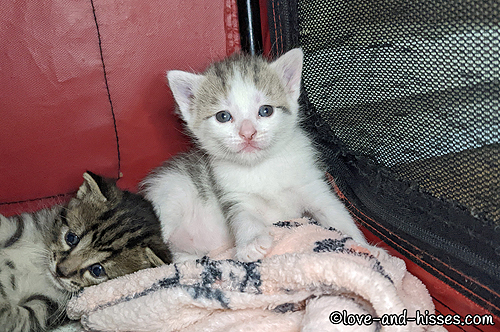 “It’s a good foot!” says Kudzu with a smile. Can’t argue with that! 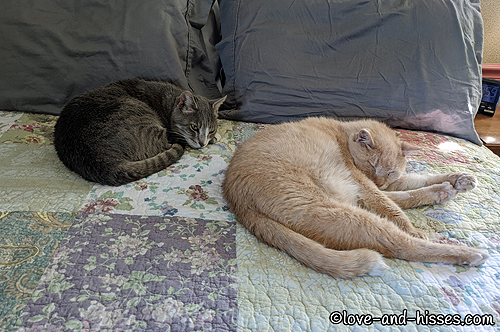 Archie’s having Deep Thoughts while Newt is out cold. 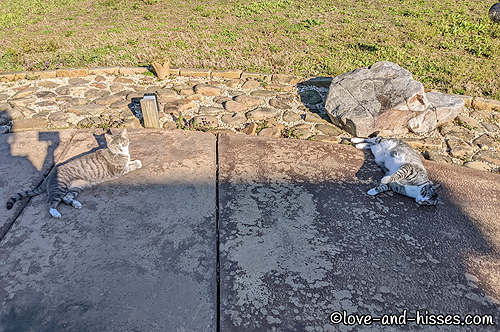 Archie (left) and Charlie enjoy the sun in the back yard. 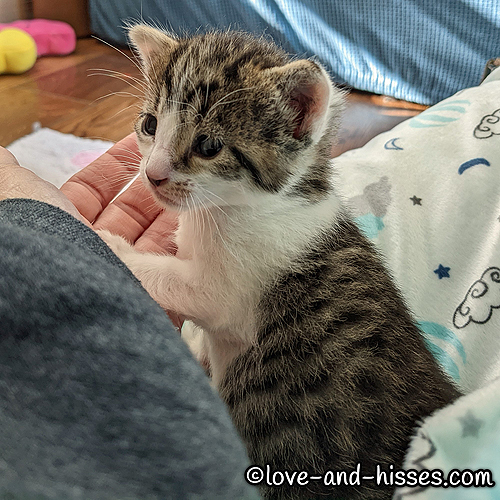 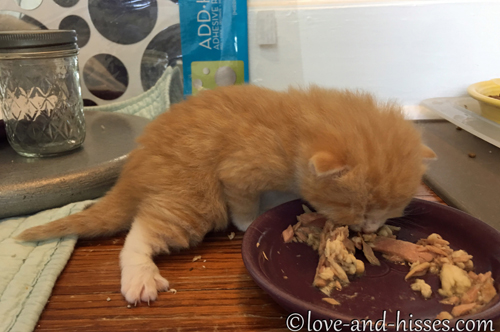 Throw Back Thursday: that’s Andouille (one of Nola’s Cajuns) in 2017 at 17 days old, eating canned food. That’s the earliest I’ve ever seen a kitten show interest in solid food, and I was completely surprised. (Naturally I got a LOT of flack for “forcing” a 17 day old kitten to eat food. If you consider watching a kitten toddle across the room to sniff at – and eat – food on his own to be “forcing” him, then yeah. Ya got me. Guilty! Somehow he managed to grow up to be an upstanding citizen, he’s now Andre, and you can actually see him and his sister Beignet (now Bella) on Facebook occasionally, here: https://www.facebook.com/kayskittykisses )⁠

Kittens usually start showing interest in solid food after 4 weeks. When there’s a mama present, I let them go at their own pace. Eventually they follow mama to the plate, sniff at what she’s eating, and decide to give it a try. It’s worked out well so far, and every kitten I’ve fostered has figured it out sooner or later.⁠

In my experience, kittens generally figure out the litter box first (likely because once kittens are eating food other than what they get from nursing, mothers are MUCH less interested in pottying them). This weekend I’ll put out small litter boxes and let the kittens check them out. (This is assuming that they start leaving the crate on their own. I’m pretty sure they’re only a few days away from that.)⁠

Oh, and the kittens do, indeed, have teeth coming in, adorable, sharp little chompers.

YouTube link
Throw Back Thursday: 4 years ago (2018), we had TWO pregnant cats, dilute tortie Kristi and her super-feral housepanther daughter, Katia. Katia had 4 kittens three weeks before Kristi had her 6. Katia and Kristi co-mothered their 10 kittens in the same crate, and so the day after Kristi’s kittens were born, I captured this sweet video of 3 week old Dean cleaning his aunts Tessa (gray) and Picabo. (In the first section, you can see Dean’s sister Katarina hanging out with them.) ⁠

These days, you can see Katarina and Dean on Instagram. Picabo (now Harley Quinn) and her brother Brian Boitano (now Prince Harry) can be seen on Facebook here. 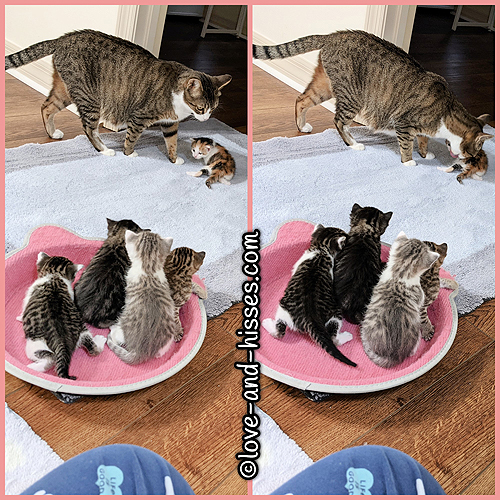 We have an escapee! Hollyhock didn’t know where she was going except for “Away from that ding-dang pie plate,” and her brothers looked on in amazement, thinking “Wait. We can DO that?!” Mimosa came over and gave her a sniff, and then said “You do you, kid” and went back to her dinner. (They still haven’t even attempted to escape the crate yet, though.)

YouTube link
Throw Back Thursday: 2018, when Deanzilla (the floofed-up black boy) was feelin’ floofy and showing off his skills for his aunt, Ohno. ⁠

(If you missed the earlier video of Dean cleaning his 1 day old aunts, I suggest you scroll back, because it’s way too sweet.) (Dean and his sister Katarina are on Instagram, here.) 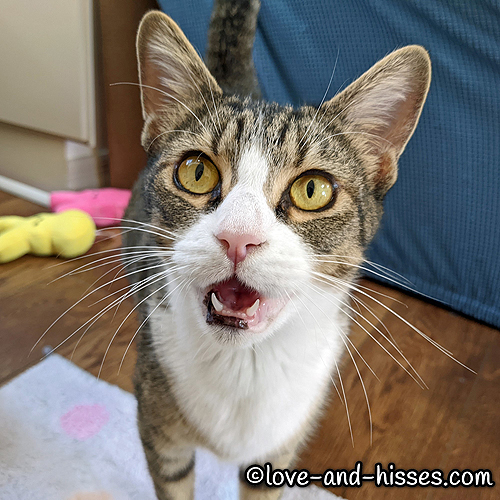 “Lady!” said Mimosa. “You will be shocked to hear that the plate of canned food is empty and I am starvin’! I recommend you rectify this situation immediately!” (I did, of course.) 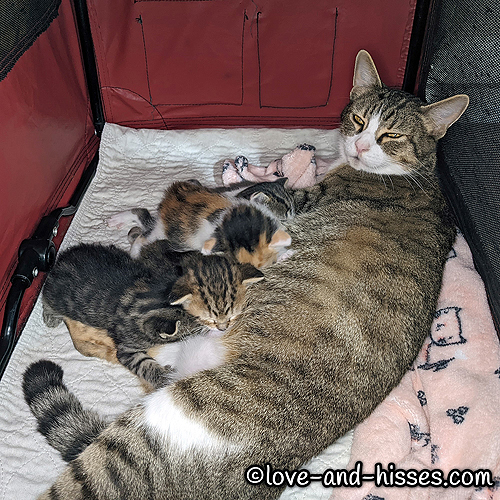 Good night innernets. (All 5 kittens are in this picture, but Kudzu is hidden under Hollyhock.)