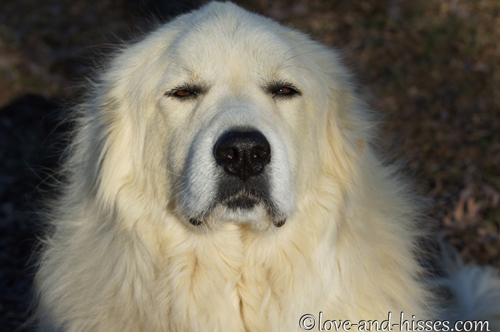 In December of 2008, after we’d moved our chickens to the big coop in the back forty where they still reside, we lost several of them to predators. We talked about many ways to protect the chickens, and decided that we needed livestock guardians. Fred contacted a rescue about adopting a Great Pyrenees, but the adoption fees were high, and most importantly, none of the rescues would allow their dogs to be outdoor dogs, but to be inside dogs who were pampered and spoiled. Pampered and spoiled wasn’t a problem for us, but if the dogs were inside, who’d be out guarding the chickens?

I happened to pick up a free newspaper one day when we were out running errands, and in the classified section I saw an ad for Great Pyrenees puppies. Fred called and talked to the guy, who was pretty desperate to find a home for the puppies who were eating him out of house and home. We met him in Tennessee, and chose two of the three puppies he had with him. We were so very lucky with George and Gracie – there’d been some sort of issue with their mother’s milk supply, so they were bottle raised. They’d also been around chickens and grew up around kids, so they were friendly and knew not to chase the chickens. It’s funny – I remember thinking “Wow, these puppies are big. I bet they won’t get much bigger than this!”

As I mentioned, they liked kids and people, and I’m not sure how much they would have protected the chickens against people. Any human who entered the back forty was welcomed – if someone went in with the intention of stealing chickens, I suspect that George would have helped load them up. They were NOT sure what they thought about the pigs, but I think they eventually considered them part of the flock. There wasn’t any dog-pig intermingling (the dogs couldn’t get into the pig yard) except for the one time the pigs figured out how to burrow under the fence. They knocked over the scratch can and ate all the scratch, and when I went out and asked George why they weren’t doing something about the pigs, George told me he was no dummy and he wasn’t going to tussle with pigs who were each twice his weight, thank you. They were rarely far from each other – they’d split up to patrol the back forty, and then flop down together. Gracie was the more playful one, and she’d goad George into playing. He would grab her tail and hold on to it. That would drive her crazy, and she’d eventually stomp off, and I swear George would laugh as she stomped away.

Gracie was always the first to spot any potential threat to the flock, and she’d race away to bark at the song bird or hot air balloon. George would take a moment or two to figure out what was going on, and then he’d follow along, barking his deep and fearsome bark. I always said that Gracie was the brains of the operation and George the brawn – they made a perfect team. 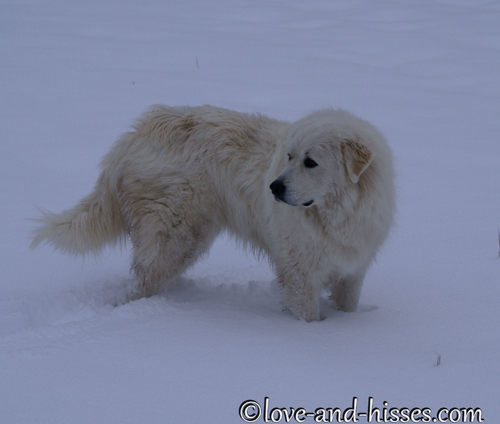 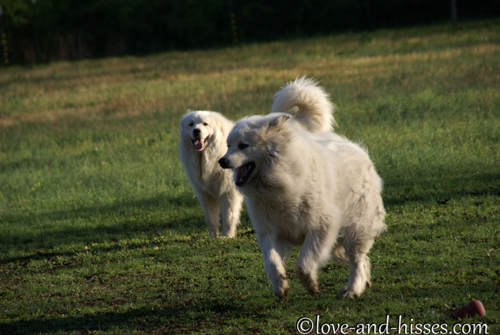 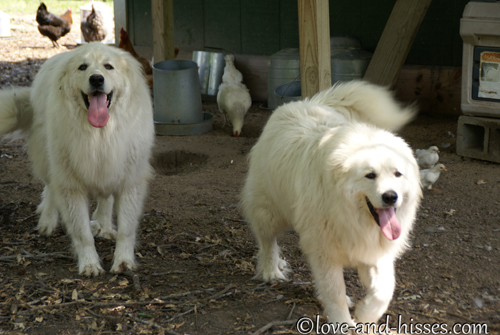 Fred built a dog house for them on the back of the chicken coop. They spent exactly one night in it, and then wouldn’t go in it again. Great Pyrs don’t really need to be protected from the elements – the worse the weather is, the more they love it. We’d look out in the middle of a rain or snow storm and see George in the middle of the back forty, sound asleep. The years we had snow, he thought it was the greatest thing ever.

His favorite places to sleep included under the chicken coop (until he got too big to get under there), in piles of leaves, in the middle of the back forty. In the past couple of years, he took to occasionally snoozing the day away in the pig shelter. 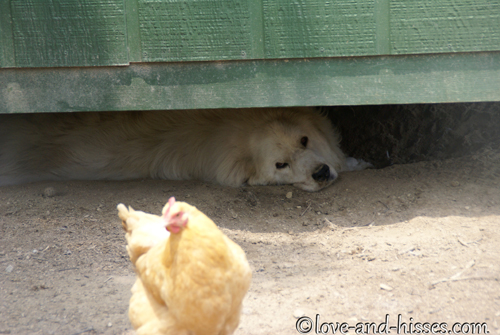 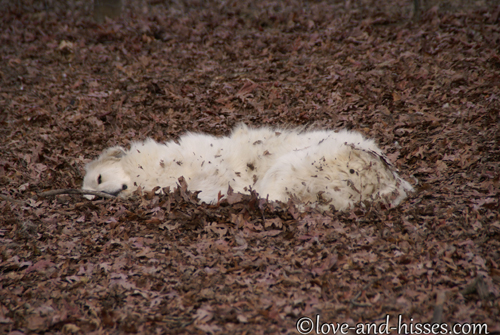 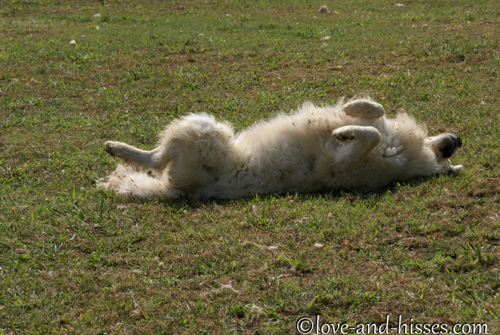 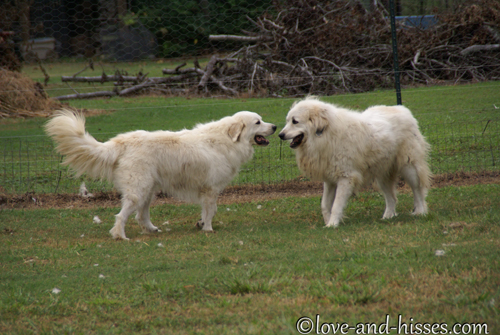 They loved Dirt Mountain so much – I think they were under the impression that we’d had it built just for them. I loved looking out there and seeing them on top of Dirt Mountain keeping an eye on their domain. They loved to run around on their mountain, chasing each other up and down, back and forth. They loved that thing. 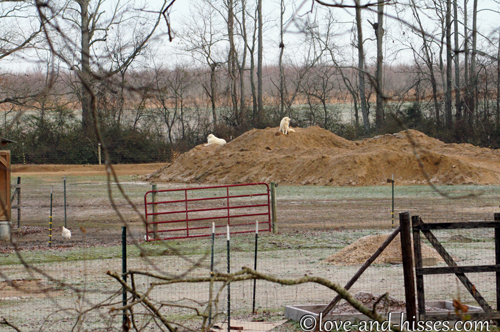 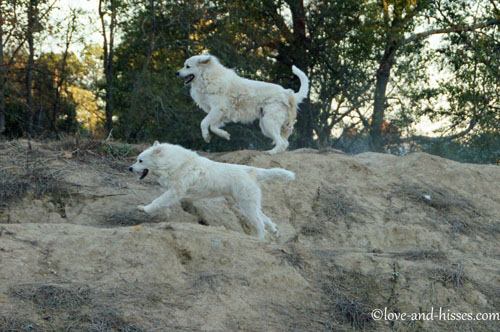 George’s list of favorite things included (in no particular order) ear rubs, belly rubs, his morning can of dog food, his flock of chickens (as long as they didn’t try to get involved with his bowl while he was eating), snacks, sleeping, showing birds/hot air balloons/airplanes who the boss was, barking at the dogs in the neighborhood who were barking, going to the vet so the vet techs could talk about what a good boy he was.

More than anything, George loved his Gracie. They checked in with each other constantly, and they were never very far apart for long. 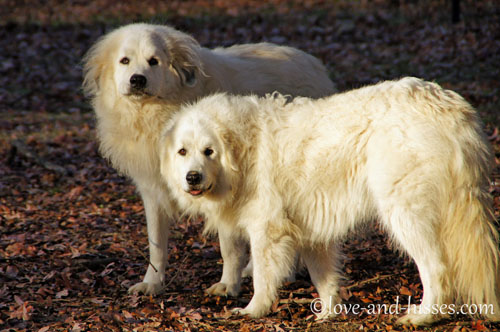 When we lost Gracie unexpectedly last August, we worried about George. They’d spent their entire lives together, and we feared he’d be lost without her. Overnight, he aged. He went from a relatively spry dog to an old one. He moved slowly, he slept a lot more. The light went out of his eyes. He still took pleasure in seeing us come toward the back forty, the ear rubs, the treats and occasional snacks. He did his best, but since Gracie went, we’ve lost two of our four ducks and a few chickens. Covering the entire back forty was more than one old dog could handle, it seems – he’d lost his teammate, his best friend, his partner in crime.

His decline was a slow one, but we saw it happening. He was a wonderful boy with a big heart, and was the very best good boy every minute of his life. 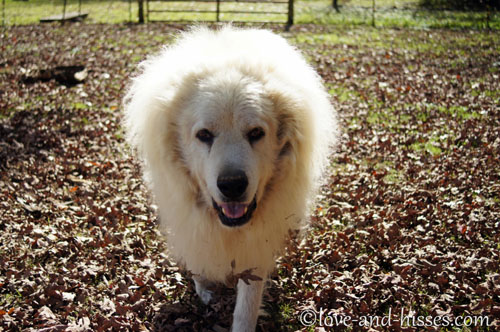 We had him cremated, and have ordered a stone with his name on it. Fred will lay the stone next to Gracie’s, near the coop where they liked to sleep. 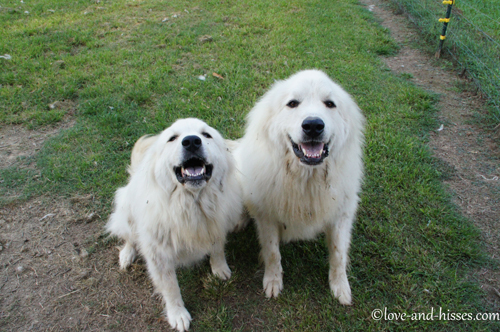 George is with his Gracie now, and they’re happy. They’re barking at those dastardly songbirds, chasing off rogue hot air balloons, telling airplanes who the bosses are, and flopping down to sleep in piles of leaves. I wasn’t ready to lose George so soon after Gracie – endings always come too fast – but I’m so glad that they’re together again.

There’s an album of pictures of George and Gracie over at Flickr if you’d like to see them.

The tribute to Gracie from last August is here (I’m sure there’s a big overlap between that post and this, not only in the stories I’ve told, but in the pictures I’ve used.)

A few people have asked – and I’m sure a bunch of you have wondered, and the answer is no, we won’t be getting any more dogs. George and Gracie were the last dogs we’ll have. If we should start to lose chickens, we’ll move them back to the smaller coop near the house. We’ve already started locking them in the coop at night to protect them.