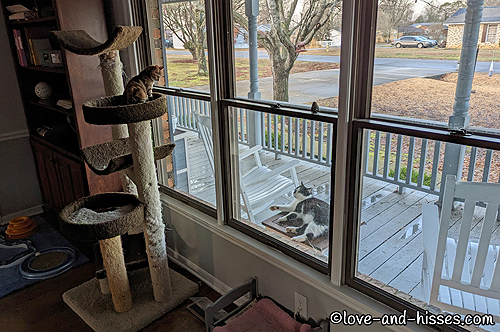 Cinnaspin on the cat tree, checking out Uncle Rocco (on the table on the front porch.)(Uncle Rocco belongs to a neighbor but spends a large amount of time on our front porch.) 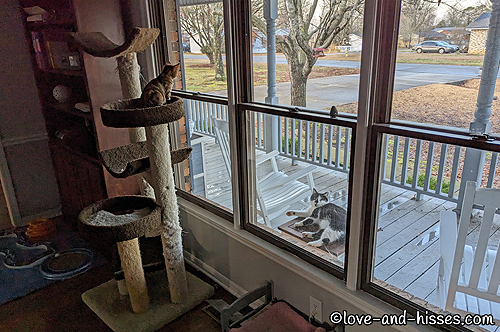 Rocco gives me a look like “What is THAT?” 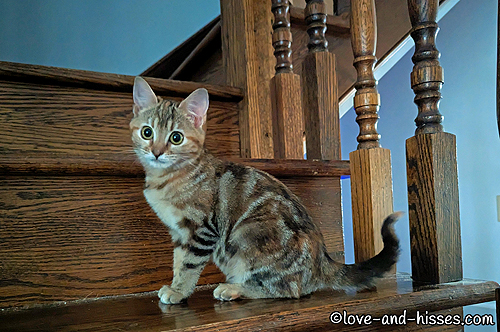 A loud truck going by startled Cinnaspin, and she retreated to the stairs. 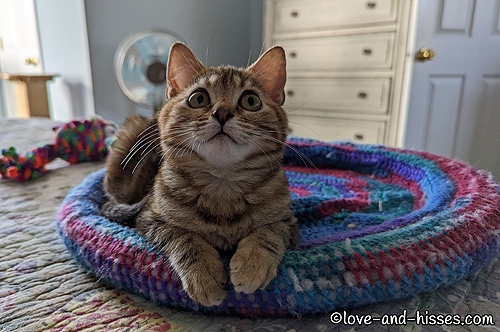 She decided to go to her safe space. 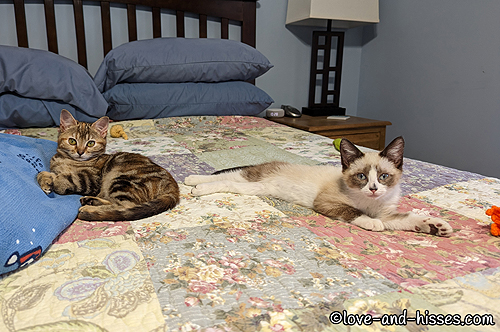 And then she and Linzer gave me some attitude. 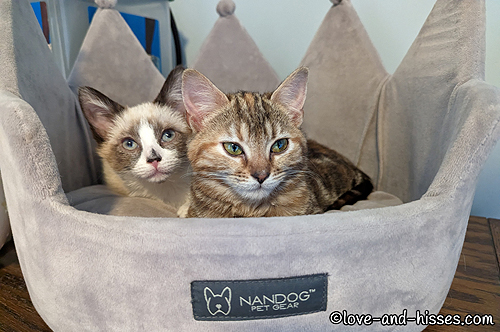 This is the bed where the girls spend just about their entire night curled up together and sleeping.

So the girls are still spending their nights in my office*, and then when I get up in the morning I give them their breakfast, and they have the run of the house during the day. What they tend to do is race around like crazy things for about an hour and then go back upstairs to my bedroom (which they seem to consider home base) and nap for the better part of the day. Occasionally they venture back downstairs during the day, but for the most part they stay upstairs until late afternoon, and then either play downstairs or play upstairs, or nap – or whatever their little hearts desire. Then I shut them back in the office at night, and I never hear a peep until the next morning. It works well! Since Charlie came through the cat door the other day and startled Cinnaspin, neither girl will go anywhere near the cat door, though of course I keep an eye on them when they’re downstairs.

*Or I should say “my office which is currently not my office” – we moved my desk into my bedroom so that the girls would have more room to move around at night. Once they’ve moved on, we’ll move my desk back in, but it’s working pretty well for now. 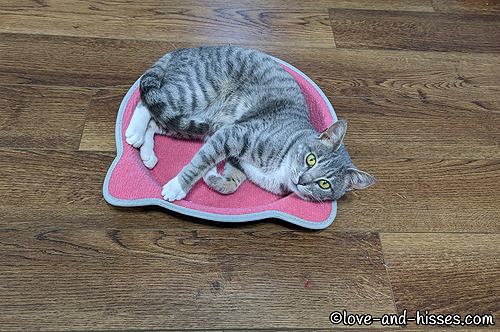 I am pleased to report that Brioche’s heat cycle appears to have ended. She still adores hanging out in the pie plate!

She’s going Thursday for her spay, and though it’s not impossible that she’ll go back into heat before then, it’s unlikely. 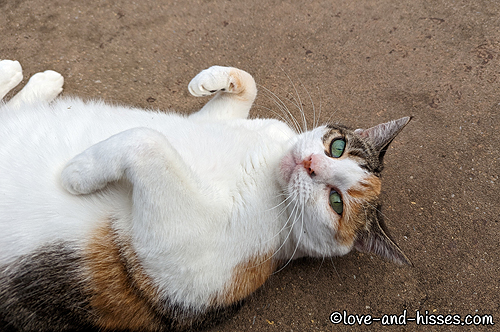 Oh that Alice and her pretty, pretty eyes.

Posted on social media (Facebook/Twitter/Instagram/Tumblr) this past weekend. 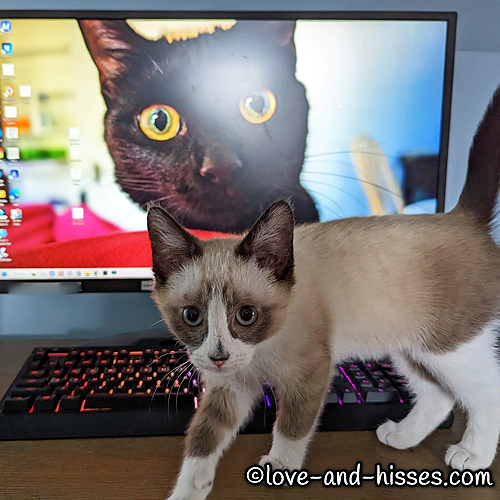 Linzer would REALLY like to know why she can’t stomp all over my keyboard. She insists she’s trying to HELP. 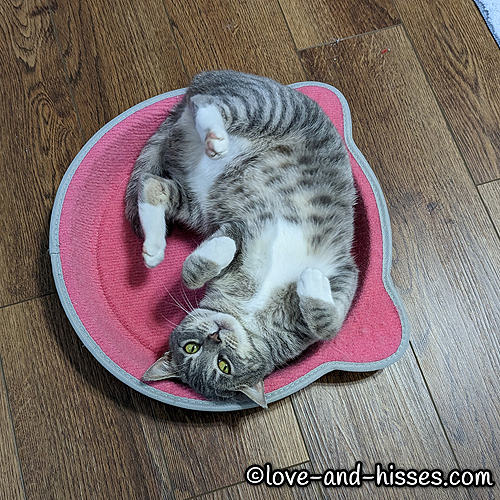 It’s a Brioche pie! (My favorite!) 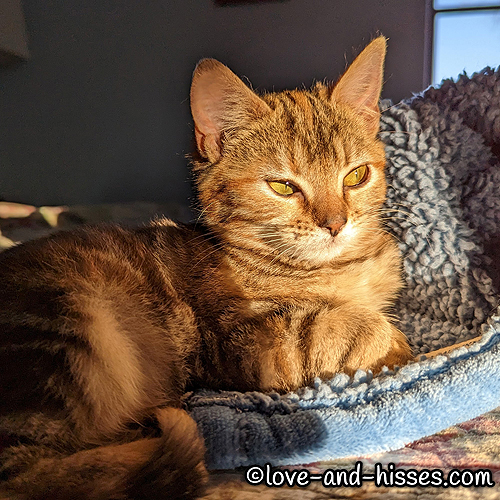 The sun comes through that window for about 10 minutes every afternoon, and (on sunny days, at least) Cinnaspin enjoys every minute of it.⁠ 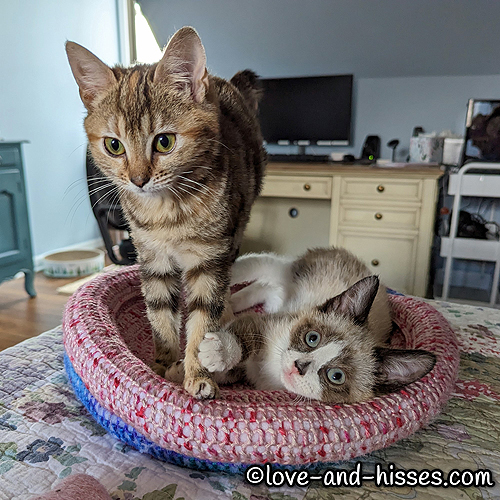 “Is it time for another nap, lady?” Cinnaspin and Linzer wonder.⁠ 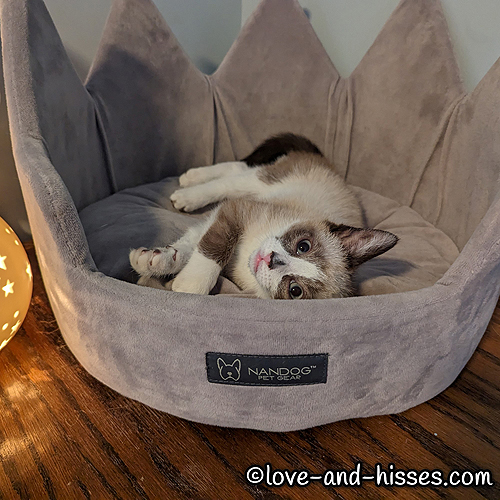 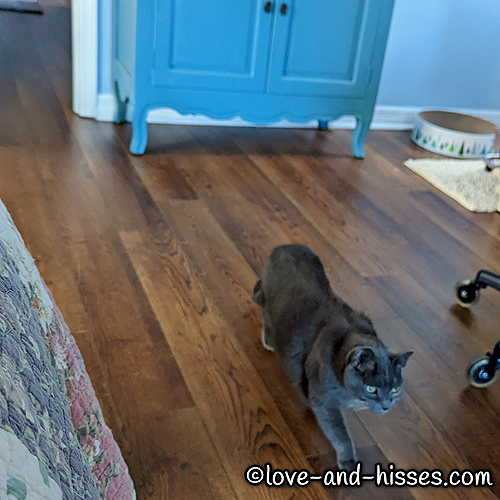 (Permanent resident) Uncle Jake says “Don’t mind me, I’m just strolling through to check out the rumor that there’s a bowl of kitten food in your office.” (Turned out the rumors were true, and Jake had a few bites of that tasty, tasty kitten food.) 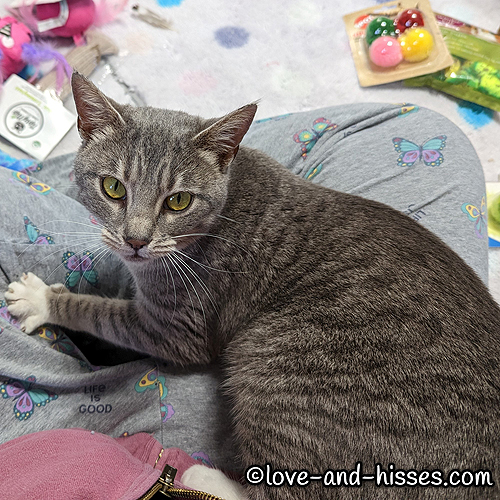 YouTube link
Cinnaspin and Linzer love to smack at each other through the fabric of the ham-mick. They’re so adorable to watch, those girls. 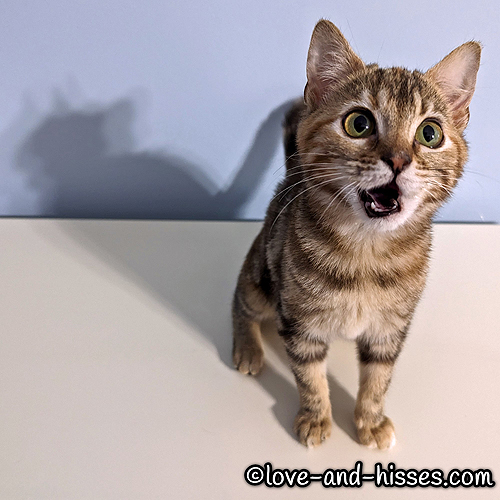 Cinnaspin and her shadow are absolutely SHOCKED to hear that it’s not Churu Time.⁠ 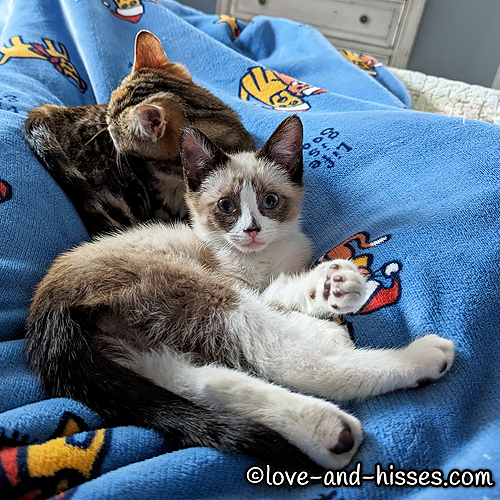 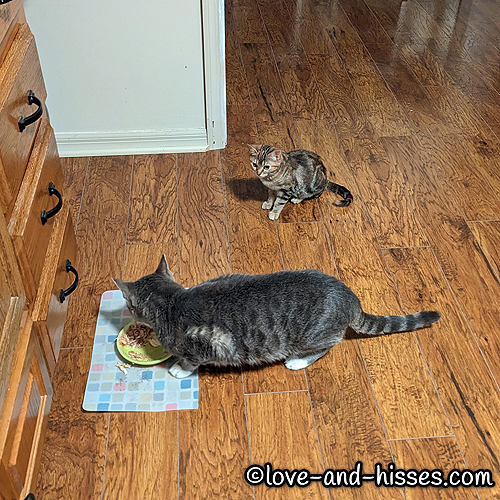 Cinnaspin is pretty sure that Uncle Archie wants to share his breakfast, so she’ll wait (im)patiently right here. (Uncle Archie does not share food, but he did leave a little food for Cinnaspin because he hates being watched more than he hates sharing.) 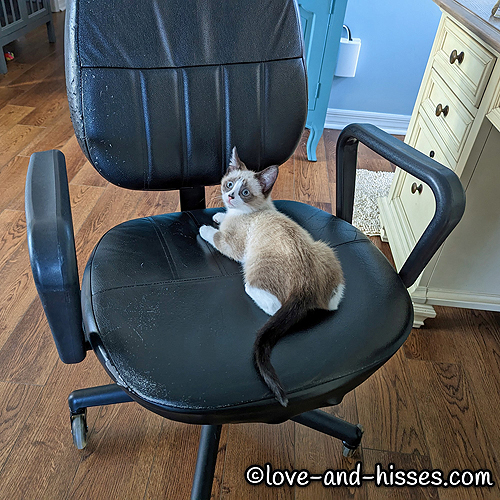 Linzer’s all “Oh gosh, lady. Where are YOU gonna sit?!” (It’s amazing how much room a 3 pound kitten can take up, isn’t it?)

YouTube link
I put my phone on selfie mode, and Linzer just could not take her eyes off the beautiful kitten on the screen. I certainly can’t blame her!⁠ 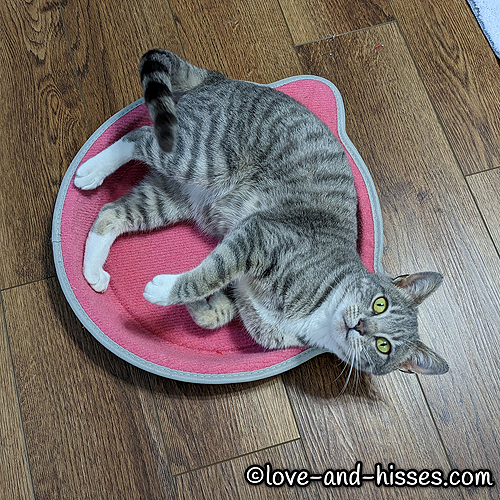 There’s ALWAYS a Brioche pie in the foster room. (My favorite!)⁠ 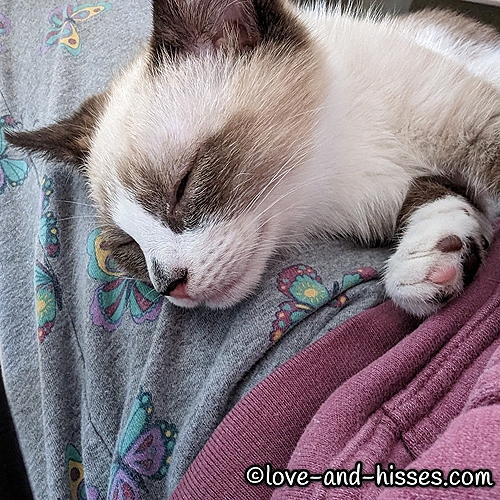