Liza asked me a question on Facebook yesterday, and I didn’t know the answer. I know that someone (maybe many someones!) will know, though – is there a blog out there written by someone who has one or more FIV positive cats? Please leave a link (or name) in the comments if you know of one. Thanks!

We have progress in that Norbie norbs is able to roam freely, but the other cats still hiss and growl. He just goes about his business of poking his nose in every corner of the apartment and either ignores, provokes, or runs away from Claudette and Riley, depending on his mood. He went to the top right away. It’s about 7 feet high. Too oblivious to the goings on in the courtyard to notice he was being stalked. Spoiled rotten you say? Perhaps…but he is earning his keep by providing an unlimited supply of kitten elixir. And lastly-the picture I took while writing this email. Norbie sends his lurve!

Don’t you just love seeing that happy little face? I just love getting updates! Thanks for the update and pics, Kirsten! 🙂

Norbie is off to Chicago? Is this the furtherest one of your charges has traveled so far??

Gus and Mike (back in 2009) went to Oregon. None have left the country, though… yet!

Another angle on kitten cuteness.

And yes, it’s kind of hard to read, so you can click on the picture to see the larger version over at Flickr. It’s set up this way – the names on the side are the cats having the feelings and the names at the top are the cats that cat is having the feelings about. (“No” means there’s not really any interaction between the cats.) So you can see that Jake LOVES everyone (except Maxi and Stinkerbelle, who he is weirdly obsessed with), but they don’t all necessarily feel the same way about him (for instance, Stinkerbelle HATES Jake.)

The picture isn’t a great one, because I made the chart in Open Office and then got a screenshot of that. I’m sure there’s a better way to do it, but I couldn’t think of one, so there you go.

I’m curious — what is the largest litter you have fostered? I don’t remember anything larger than the Sopranos at 7, but I’ve only been reading the blog for about 2 1/2 years.

In 2009 we had The Seven, which was (obviously) a litter of 7 siblings, including tiny Beulah. However, that was just the kittens, their mother wasn’t included, so I think the Sopranos is officially our largest litter.

How do you get anything done with a box full of teeny kittens in the house? I’d coo over the fur balls all day…

Was there ever a time when Miz Poo was an only child? Just wondering.

No, she’s never been an only child. We had four cats (Tubby, Fancypants, Spanky, and Spot) when we adopted her (and OH did Fred freak out about the fact that we were going to have FIVE cats. HAHAHAHA.). A few years later Fancypants went missing, and then we adopted Mister Boogers. Tubby died, and we stayed at 4 for a while (a few years? Maybe?), and then we adopted Sugarbutt and Tommy. When we moved into this house, the floodgates opened. Miz Poo would LOVE to be an only child. She has zero use for other cats. In fact, all our girl cats would be super happy to be only cats (except for Stinkerbelle, I guess, who would like to have herself and Tommy as the only cats.)

So I went back and have been reading the blog from the beginning (which I’ve done already once I admit) and got VERY tickled at this part from the Sept 19 2005 entry:

“The other day Fred and I discussed the fact that we don’t have nearly enough carriers for the number of cats that we have. If, god forbid, we needed to evacuate, there’s no way on earth we could fit all four of our cats in the one cardboard carrier we have. So Saturday, knowing that I was going to need a decent carrier on Sunday anyway, I went to the pet store and bought a carrier with a door in the front AND a door in the top. I’m going to buy one more at a point in the near future, so that we’ll have three carriers. We can put Spot in one, Miz Poo in one, and Mister Boogers and Spanky in one.”

So, I’ve got to know Robyn – how many carriers do you have NOW? 🙂

A casual stroll around the house and garage tells me that I’ve got 9 carriers in Fred’s bedroom closet upstairs, 3 more in the downstairs closet, 1 sitting in the computer room, 1 in the back of my car, and at least 5 in the garage. That’s… doing the math… carry the one… 19. But one of the carriers in the garage isn’t mine and needs to be returned to the spay/neuter clinic, and I highly suspect that there are 2 or 3 more in the tractor shed, because Fred likes to STEAL my carriers to put pigs or chickens in.

I have all different kinds of carriers, but the ones that have doors on the top and the front are still my favorite. They’re so HANDY.

So — with 7 bebehs at the milk bar, is there one who is always pushed away or are they all fed equally? It looks like Paulie Walnuts is going to be a bruiser, but not quite sure who the next “Stompers” will be. Inquiring minds need to know.

The competition can be pretty fierce at the milk bar, but they’re all getting enough to eat so that they’re gaining (I need to get the weight chart added to their page!) I’ll admit that I occasionally make a point of putting Tony with his mama once or twice a day, since he’s the smallest, but he rarely acts all that interested in nursing. I generally assume that if I put a kitten with Livia and they don’t start snuffling around to nurse, they’re probably getting enough to eat. 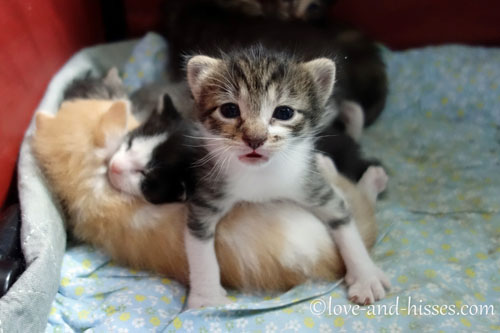 Silvio says: “KERRY, I KNOW! SHE IS TOTALLY NOT GIVING ME NEARLY ENOUGH ATTENTION, IS SHE?!” 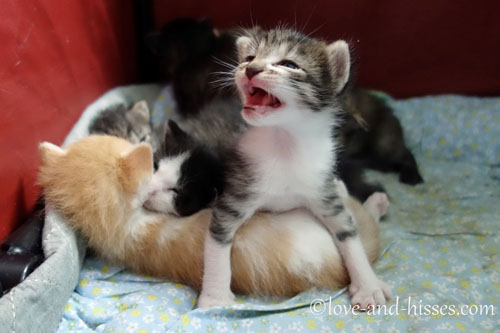 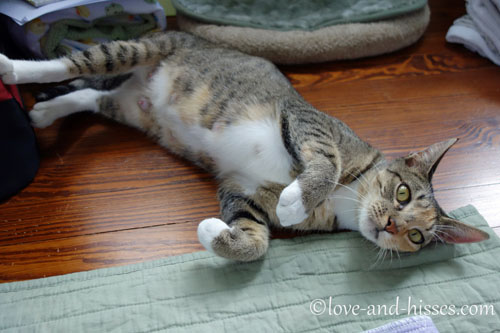 Right outside the crate, Livia perks up. 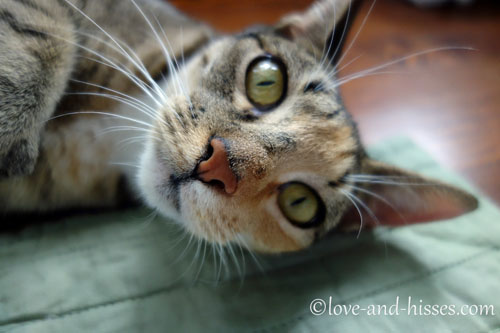 “You not payin’ enough attention to my Silvio? What’s that about? I gotta get serious with you? I gotta mess you up a little?” 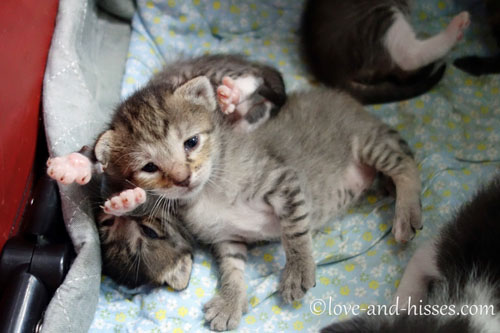 Carmela’s all “Tony? What Tony? You don’t see no Tony!” 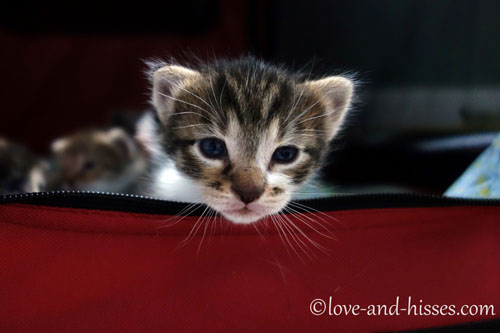 “Why you wanna look at those other kittens? You could be lookin’ at ME.” (Silvio) 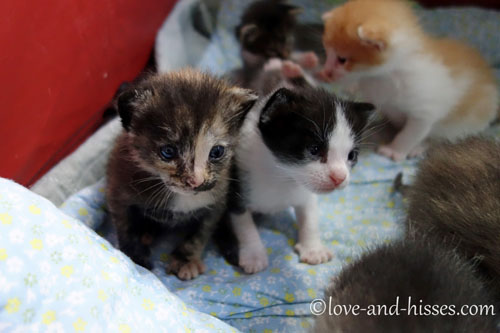 Pay no attention to the Tony behind the Meadow and the Adriana, waving his feet in the air. 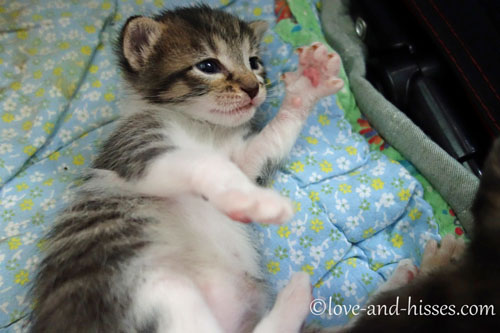 “You think Tony could do cute better than this? Fuhgeddaboudit.” 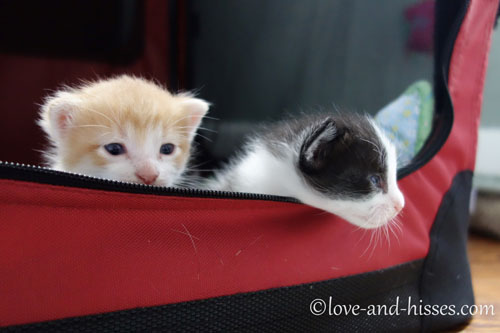 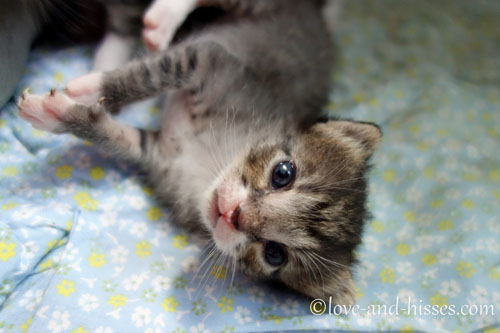 There’s Tony! He’s showing off his claws in a most menacing (and by “menacing” I mean KILL ME DEAD ADORABLE) way. 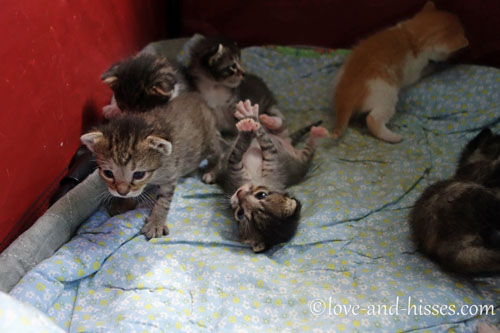 PAWS UP, Y’ALL! (He likes to lay on his back and wave his legs in the air a LOT.)

Yesterday afternoon when I was hanging out with Livia and the babies, the babies kept crawling to the door of the crate and looking at me expectantly. Finally, I took them all out and set them on the floor, where they proceeded to explore.

Except for Carmela. I didn’t see her actually do it, but all of a sudden she was back in the crate looking at me and saying “I prefer to be in here, THANKS.” Clearly if they really WANT to, they can get out of the crate. I think they’re under the impression that they’re supposed to stay in the crate – probably because I put them back in there before I leave the room. 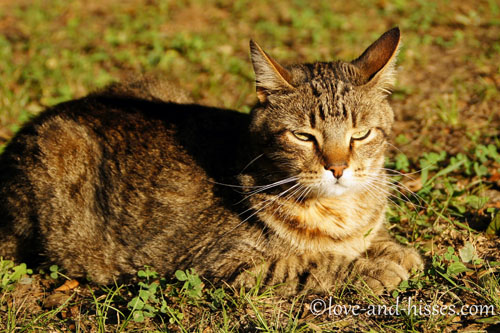 “I could put my stupid paws in the stupid air like those stupid BABIES if I wanted to, but I have DIGNITY, so I’ll just lay here and give you the Ears of Annoyance instead.”