The kittens got their first vaccinations Saturday afternoon, so as a result were very very sleepy yesterday. 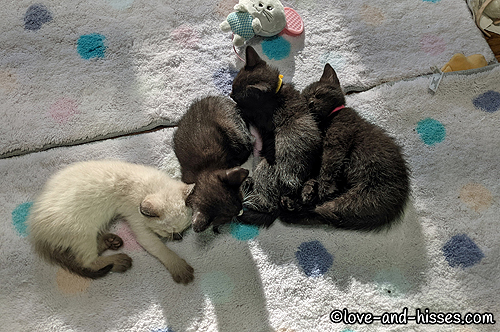 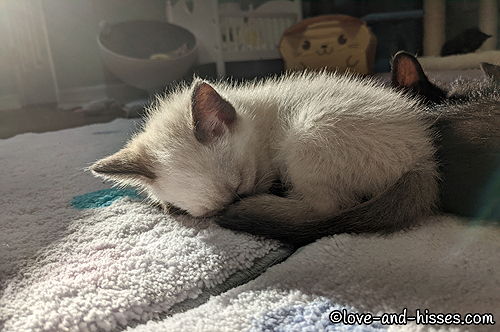 When Lalo’s face is buried in his tail, you know he’s sleepin’ good. 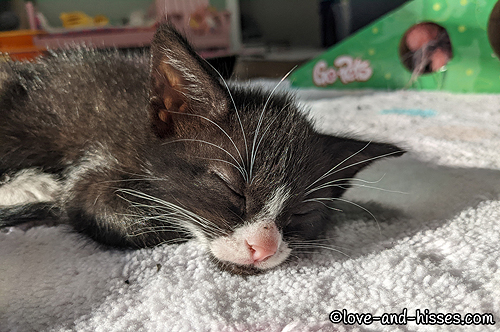 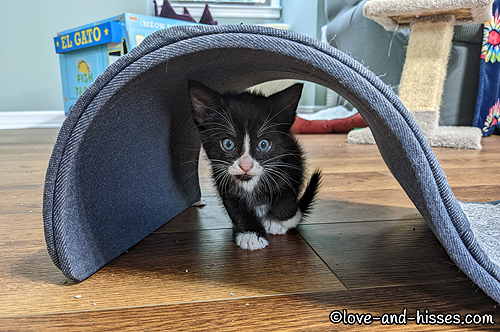 Saul under the scratcher. They did wake up and play a little, but it was nothing like the crazy wild play we’re used to. 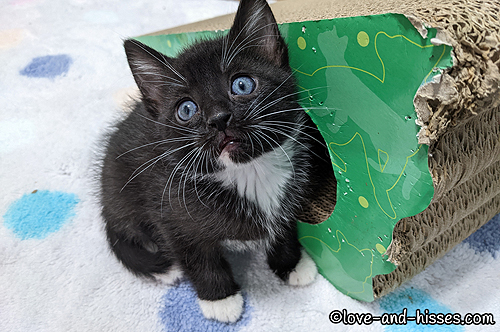 Nacho’s all “I think I needs another nap.” 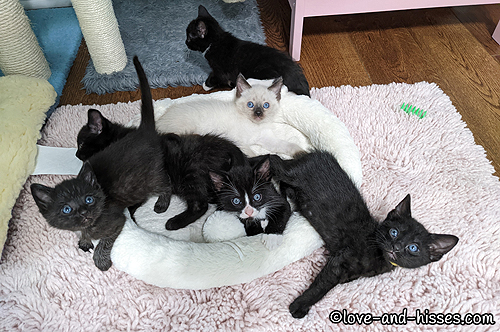 As the day wore on, they played more and slept less. 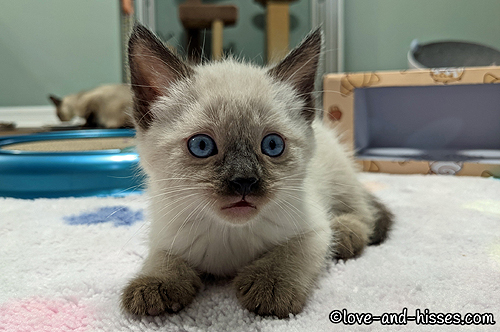 Lalo’s all “I guess I could chase a mouse!” 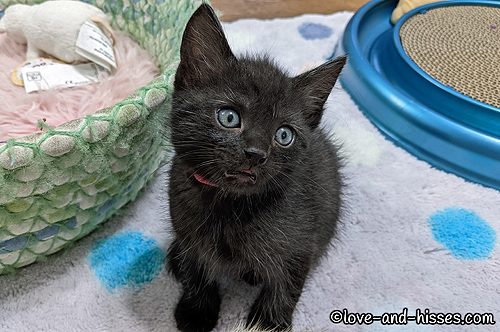 We’ve got a lights-on, no-one-home situation here with Francesca. 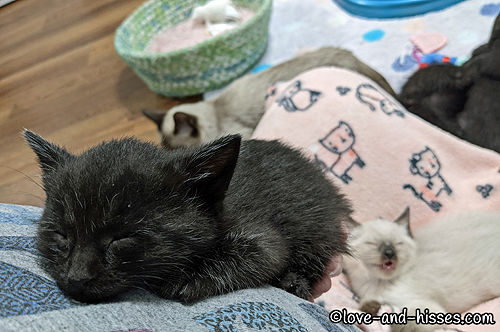 And they’re out again. 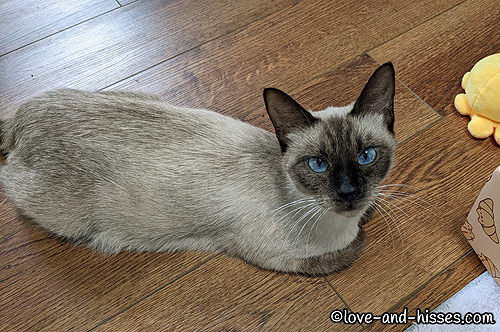 I think Kim appreciated the break.

So, if you missed it on social media Saturday, Jenny and Brianna – the last two Outlander kittens left at Petsmart – were adopted together and went home to Louisville, Kentucky. They are now Cricket (Jenny) and Filly (Brianna), and they are already having a blast in their new home. I feel like I can relax for a little while, now that they’ve all found homes!

Kim is going for her spay surgery on Wednesday. I feel like we’re racing the clock at this point – she could go into heat at any moment, it usually seems to happen right after the kittens turn 6 weeks old – and since she’s got that REALLY piercing meezer voice, I am hoping very hard that we get to skip the heat cycle this time around. Once she’s spayed, she’ll come back here for at least a few more weeks. The kittens still need their mama for a while longer, after all. 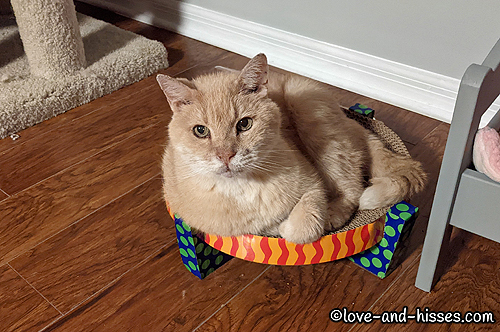 It’s a Newt in a scratcher bowl. He LOVES hanging out in that thing. 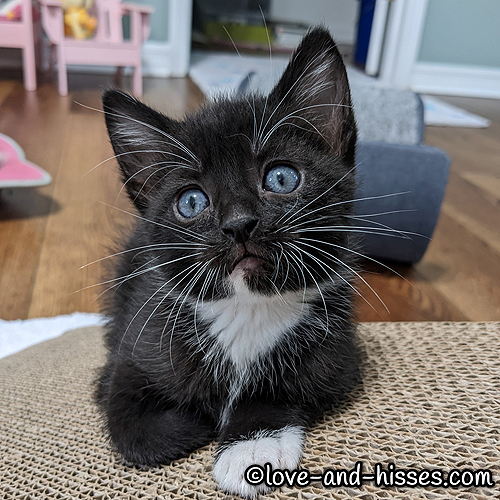 BREAKING NEWS: In case you missed it on the blog (love-and-hisses.com) this morning, I realized that we mis-sexed Nacho. (This is not the first time we’ve done this, and I’m sure it won’t be the last.)⁠
⁠
Nacho’s a girl, not a boy. (Clearly I do not look at kittens’ back ends any more than I have to, or I’d have realized that weeks ago!) This makes no difference in anyone’s life except that now her formal name is Ignacia. And I SHOULD start calling her Nacha, but I’m so accustomed to calling her Nacho that I’m going to continue that.⁠
⁠
So there’s your excitement for the day. 🙃 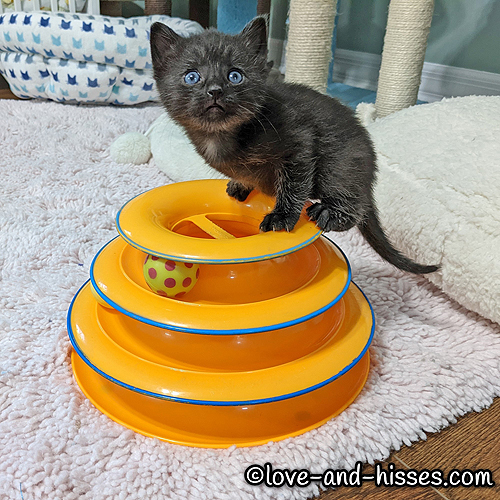 Mike shows off his balancing skills.

YouTube link
Is Saul da BAYbee? (I mean, we know he is, but it never hurts to double check!) 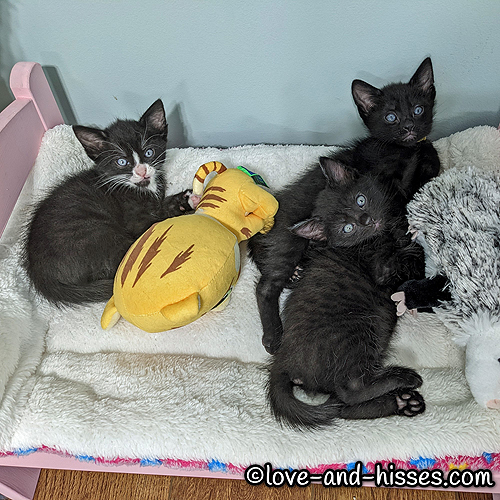 Saul, Francesca and Gus are all “‘Scuse you, lady, we is tryin’ to nap here.”

YouTube link
Mike in my lap, being insanely adorable. As usual! 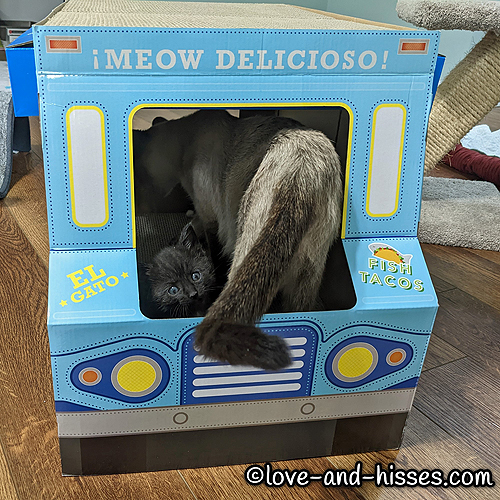 Mike and Mama check out the fish taco truck. Open for business soon! 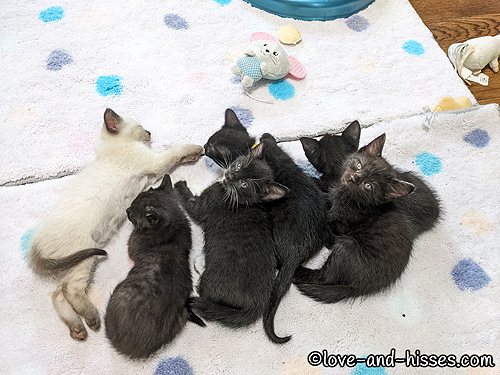 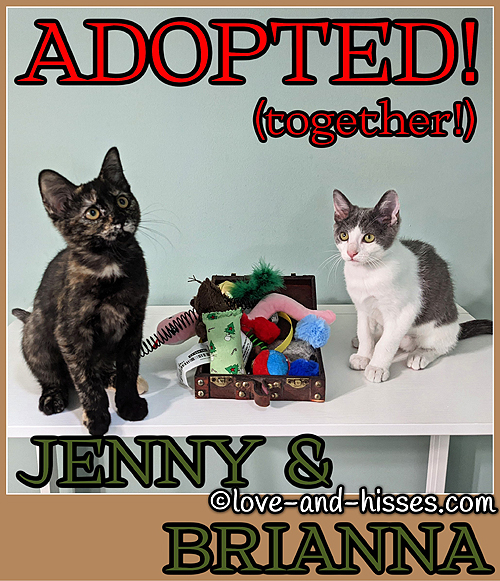 Hooray, hooray, Jenny and Brianna were adopted – TOGETHER! – today! They are headed home to Louisville, Kentucky, where they’ll be spoiled rotten and very much loved! (Their names will change, but their new family will wait to see what suits them best.) Happy life, sweet girls – and THANK YOU to their new family for making that drive! ❤️

YouTube link
It’s Gus in my lap, bein’ a cutie-cute-cute.

YouTube link
Kittens being denied the milk bar… and then Mama gives in. Yes, they’re 6 weeks old and nursing whenever Mama will allow it. They’d nurse forever if she let them! 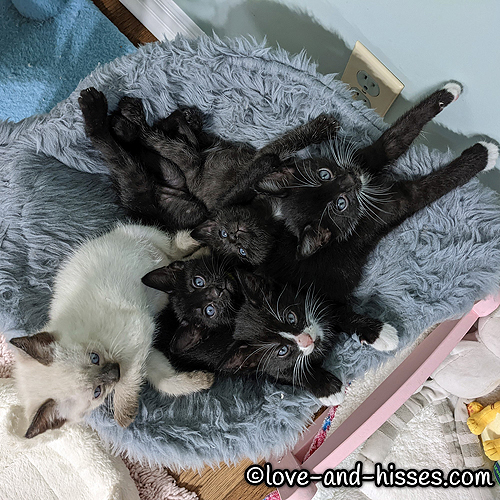 Good night innernets. (All the kittens are stuffed in that hammock, though Francesca is buried on the bottom so you can’t see her!) 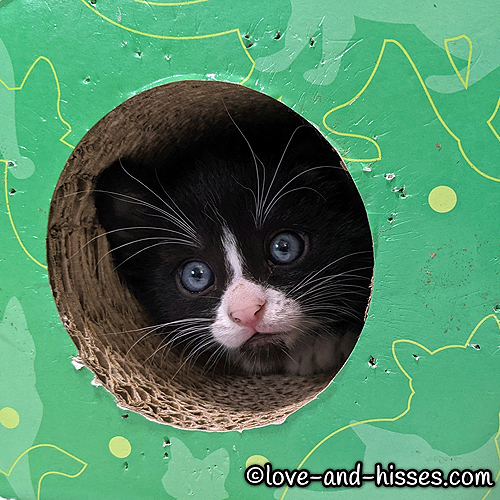 Saul’s checking to see if it’s time for breakfast (it is!) 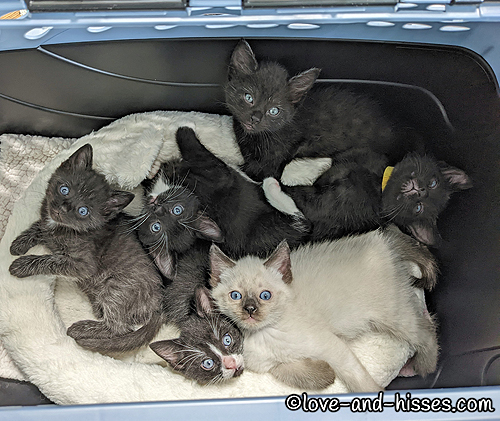 Another successful deep-clean of the foster room is done! It amazes me how calm they are about being in the carrier while I clean. Maybe it’s because they’re a chill bunch, or maybe it’s because they’re not in there for long, but whatever the reason, I’m glad that I don’t have to cart them all to the bathroom so I can clean without them underfoot! (I do sweep every morning while they’re running around, but when I want to do a GOOD sweep and mop, I can’t really do it with them out and about in the room.) 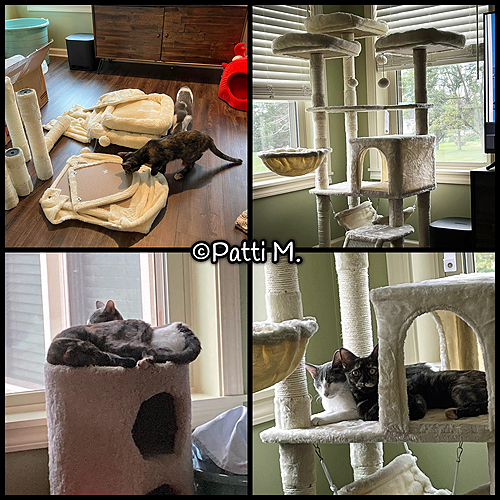 In case you missed the wonderful news yesterday, Jenny (now Cricket) and Brianna (now Filly) were adopted and went home to Louisville, Kentucky! Once home, the snoopervisory committee helped in putting together an AMAZING cat tree. But then where did they sleep? Not on the cat tree, of course. Curled together on top of a condo instead (because: kittens.) They eventually discovered the cat tree and gave it the Snooze of Approval! ❤️⁠
⁠
(Thanks, Patti and Fred!) 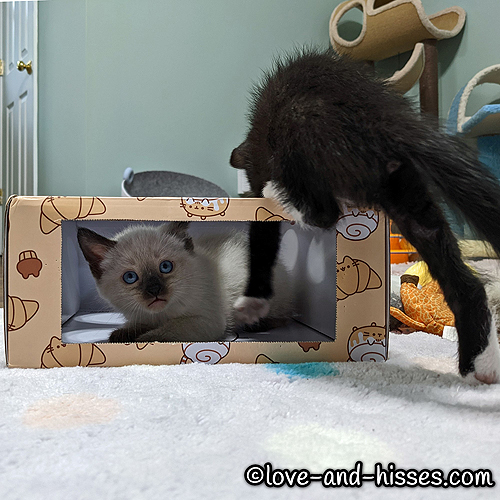 We subscribe to the Cat Kit by Pusheen Box (it’s a quarterly box), and I swear just the box itself is worth the price of the subscription (but there’s also some really cool stuff IN the box!) The kittens (in this case Lalo and Saul) certainly approve of the box. 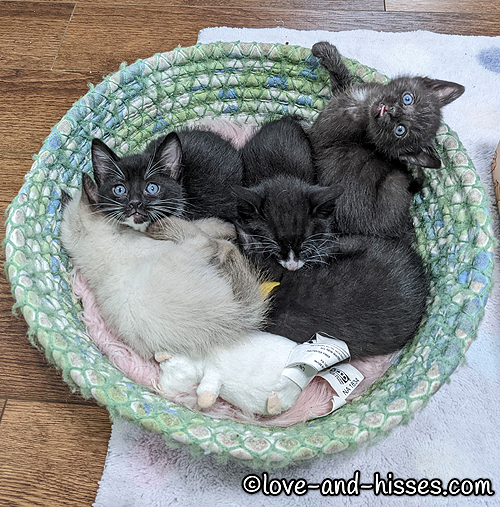 Good night innernets. (Everyone but Francesca is in the basket. Francesca was in my lap!)