Last Friday, I got to see two former fosters. Let’s see if you recognize them! That is Andre and Bella, formerly Andouille and Beignet. I got to see and visit with them, and you guyyyys. They are SO GORGEOUS. Pictures don’t do them justice!

That said – I didn’t actually get many pictures of them because I wasn’t thinking, and didn’t bring my camera with me. Also, I was pretty busy staring adoringly at them that even with my phone, I didn’t take many pictures ’til I was getting ready to leave. Next time I’ll do better!

(Of course, in the meantime you can check ’em out on Facebook at Kitty Kisses!)

Andre and Bella (and Kay!) actually greeted me at the door. Which is an unusual experience for me, because in my house when the cats see someone coming to the door, they vamoose. But Andre and Bella were total greeters, checked me out, let me pet them, and I even picked Andre up. Then I got to watch them play for a while, occasionally petting and picking them up for snuggles, and oh! Those two are just so darn pretty. Look at those spots and stripes and that tail! Look at that tail and those spots! Thank you, Kay, for letting me visit, it was lovely to see them (and you!)

In case you missed it on Facebook/Instagram Saturday or in yesterday’s post, this happened: 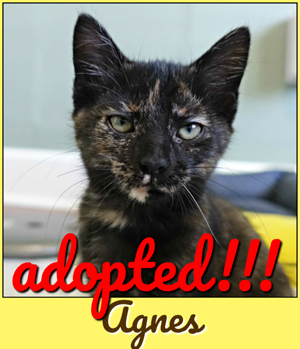 This left Mrs. Potts in her cage alone, so while I was dithering over who to take to keep her company – and whether I should wait until the end of adoption hours just in case she got adopted too, which would require a second trip down to take another kitten to keep the left behind kitten company – Kathie told me to go ahead and bring all three of the boys, there was room for them.

Okay, then! So I took them down, put Ressler in with Mrs. Potts and Chip and Gaston in the cage next to them.

I have a bunch of pictures of the boys still to share, so expect to see them for the rest of the week. Gaston, sound asleep on my desk. The paw on the cheek kills me dead. Chip at nap time. These boys really like to sleep in the most twisted-around positions. “What you want, lady?” I just love Ressler’s big round eyes. Chip to the left of me. Gaston to the right. This was going to be a picture of the boys sprawled out sleeping, but then eagle-eared Ressler heard me move to take their picture, and had to see what was going on. It is super duper quiet around here without those three boys to snoopervise my every move. I’m hoping their families come along quickly and snatch ’em up!

Oh, STOP. I know what you really want to know, and I’m here to tell you that NO, there are no cats or kittens in the foster room. I didn’t sneak ’em in while you weren’t looking.

They’re currently with Teresa, who is fostering them until the end of next week, and then I’ll take possession. Meet the new fosters… Mercury and her nipples.

YES, she is pregnant, and she should be giving birth at any moment. I mean, we thought last Sunday, when Teresa got her, that those babies would make their appearance VERY soon. And then… nope. (Does this sound at all familiar?) So there’s no way that girl is faking, but as to when she decides to actually have them, who knows? I’ve got my camera on standby, and if she goes into labor, I will zoom on over to Teresa’s. (I mean, unless she has them in the middle of the night, in which case I’ll zoom on over the next morning!)

In the meantime, Mercury is being spoiled rotten (as every pregnant kitty should be.) She is a VERY friendly snugglebug and a lap cat and SO PRETTY, as you can see. I’ve been teasing Teresa that she’d have a ridiculous number of kittens, but Brittany stopped by and gave her the once-over, and said she felt four or five kittens. I think those are good numbers and I hope she’s right!

So we’re on Kitten Watch! And while we’re waiting, I’m going to get some stuff done around here that I’ve been putting off including a lot of canning, a lot of cleaning, and maybe even a little painting (but probably not since I hate painting.) Jake looks so dark in this picture! He was watching Ressler, Gaston and Chip, who were playing on the floor.