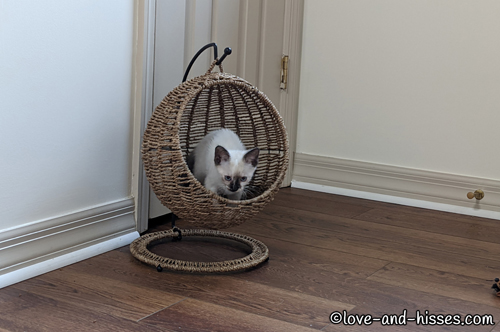 Hannah checks out the Fruittasan. 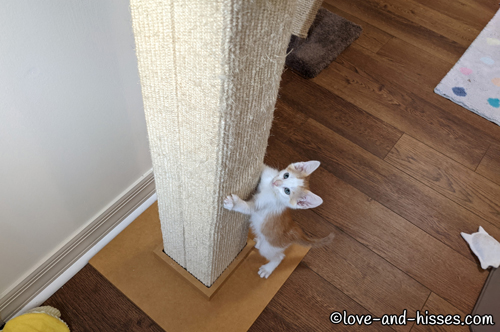 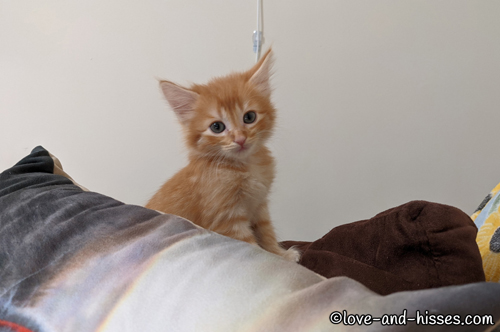 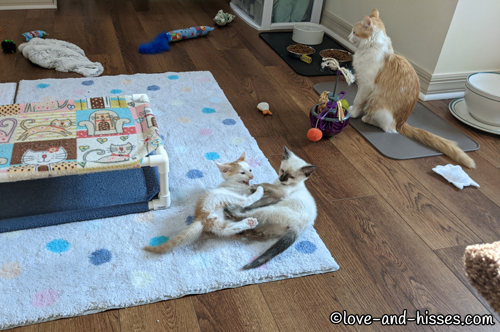 Christopher Chutney tussled with Hannah Hollandaise just fine, and then she got the upper paw and he hissed. Molly Marinara just ignored the dramatics. 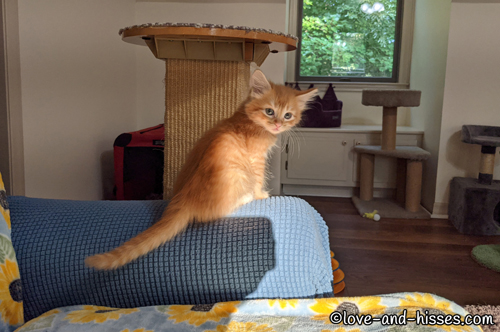 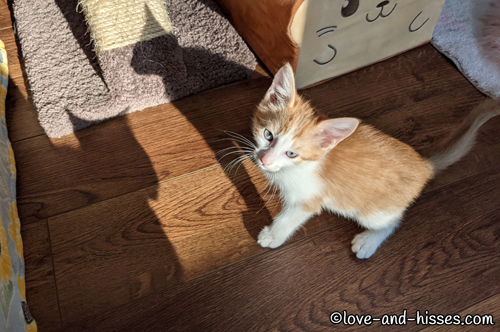 I love that you can see Molly Marinara’s shadow on the floor next to Franco Fondue (who is giving me the Eyes of What You Want?) 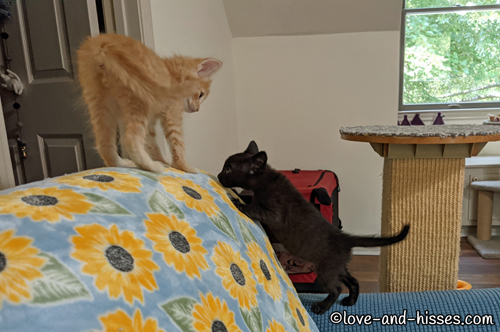 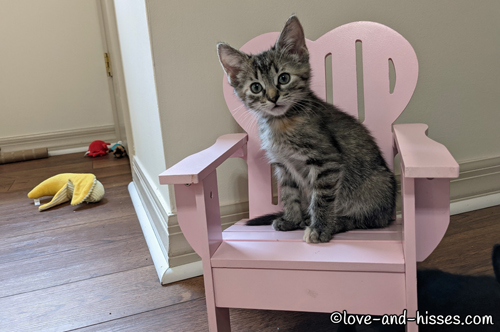 Tia Teriyaki is a little poser. 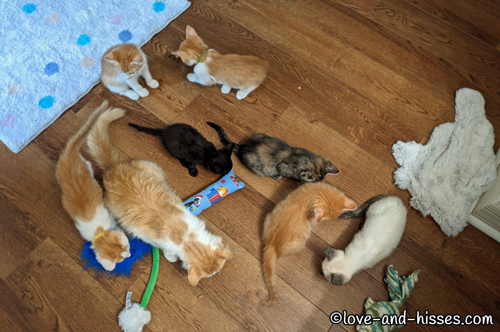 I have gotten into the (bad) habit of giving Molly Marinara a few treats pretty much every time I leave the foster room, so she’s come to expect it and in fact when I sit down and hang out in the room she sits and stares at me like “You gonna leave? You about to leave? How about now? Leaving any time soon?” Then when I stand up and walk over to the sink (the treats are in the drawer under the sink) she races me there and meows at me. Which of course gets all the kittens excited, so they run over too. But they’re not into treats the way she is, so while she eats her treats they all sniff around confusedly. Here’s a shot of Molly eating her treats and everyone else sniffing around in confusion. 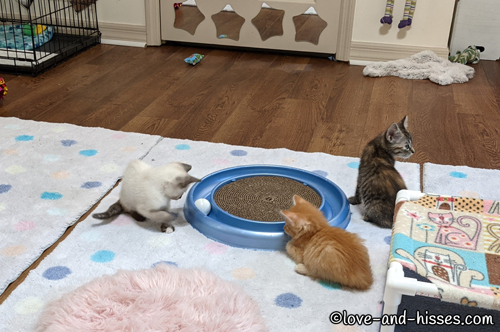 Best track toy ever, apparently. They love this thing! 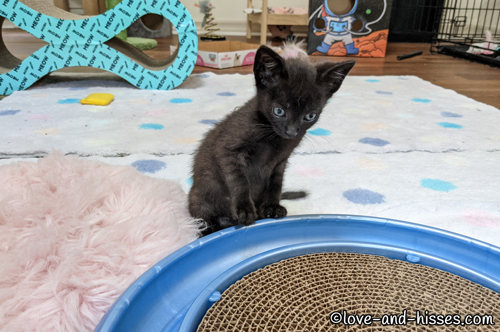 Such a good track toy that it gives Sofia Soy Sauce the crazy eyes. 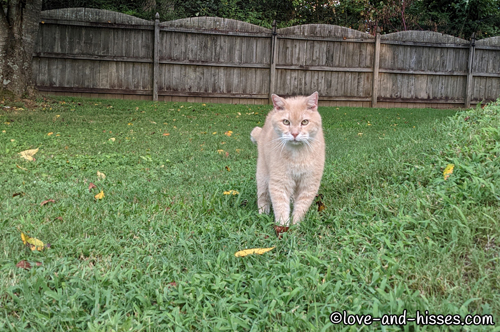 Newt is all “Seriously, lady?” 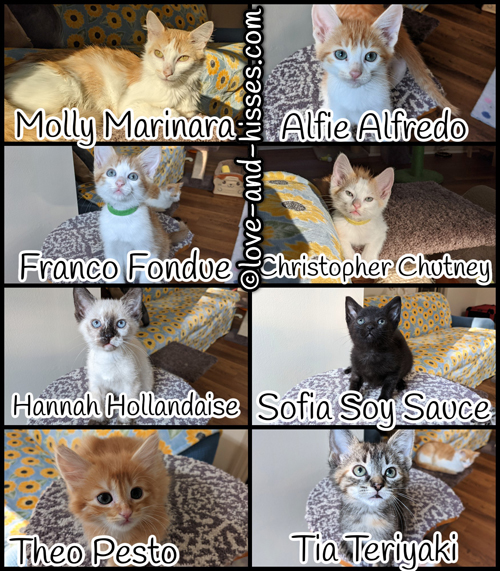 Here’s an updated collage of just who’s in the foster room! Alfie Alfredo, Franco Fondue, Christopher Chutney, Theo Pesto and Tia Teriyaki are Molly’s kittens and Sofia Soy Sauce and Hannah Hollandaise are the add-ins. (Think of it this way: if they have any orange on them, Molly gave birth to them!) 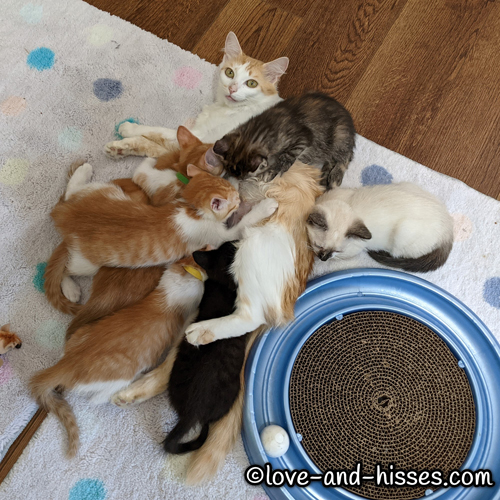 “She’s behind me, isn’t she?” (Molly Marinara did not, in fact, hiss or smack at Hannah Hollandaise, who is curled up behind her. That’s progress!) 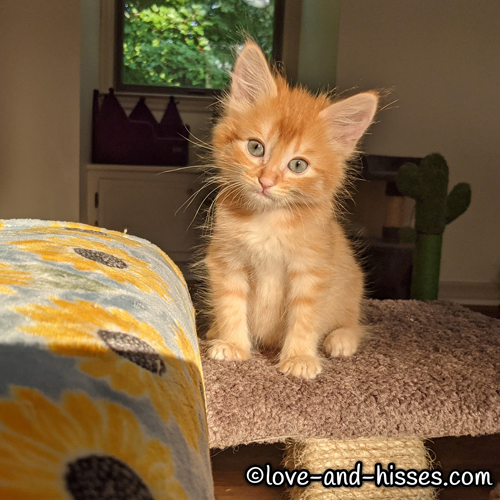 Theo Pesto’s got some nerve, being so darn cute. (I was starting to wonder if he would keep his blue eyes, but now they’re changing. I suspect the whole litter will end up with gorgeous green eyes like their mama.)

Christopher Chutney (in the Fruittasan)(which I got from Pier1 several years ago and which they no longer sell, but you can find something similar at Home Goods and TJ Maxx – but they ain’t cheap) is all “I would like a few minutes of peace and quiet, lady, is that so much to ask?” 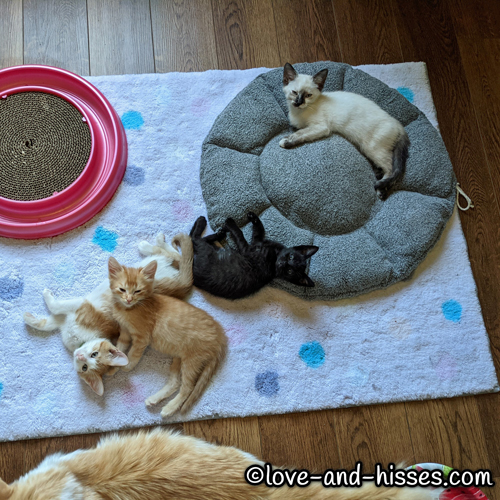