I’m sure y’all remember Bubble, one of the three kittens (along with Barnaby and Squeek) that I babysat for Brittany while she was in Uganda in June. Sadly, while I was in Maine, Brittany messaged me to let me know that Bubble had passed away unexpectedly overnight. She’d been fine at bedtime the night before, but when Brittany checked on them the next morning, Bubble was already gone. (You can see the post on the Pounce to My Level Facebook page.)

I know a lot of you loved watching Bubble while I was babysitting her, so I’m going to share a few of my favorite pictures of that sweet girl. (I love this picture so much that I’ve been using it as my desktop wallpaper ever since I took it!) Rest in peace, sweet little one. Cypress, hanging out in the teddy bear basket. While I was doing some work outside yesterday, a sprig of catnip landed in my boot. Apparently it made my foot smell good. Guess who got spotted snoozing together in the wall condo? Hemlock and Privet!
“It’s not what it looks like!” insisted Hemlock. “I was just passing through! Hemlock in the teddy bear bed, Juniper nearby. Except for some occasional hissiness from Cypress when Privet floomps toward him too energetically, there is no longer hissing or growling in the foster room. As as you can see, they’ve all pretty much accepted Hemlock as their little brother who needs some snuggling. I glanced in on them via the camera yesterday morning, and Hemlock was curled up next to Juniper. All he really wants to do with them is snuggle – he might bat at a tail here or there, but for the most part snuggling is what he wants, so snuggling is what he gets!

Spruce and Privet play together a lot, and I’ve seen Privet and Juniper play together, too (though it mostly depends on Juniper’s mood). Cypress will play with Spruce, but he’s still not sure what he thinks of The Floompy One. I’m sure that, given a few more days, he’ll be pulled into her floofy orbit. 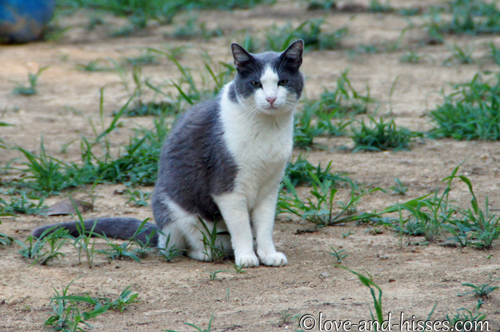