Question; for the first time EVER my Girls are going to get flea treatments. The fleas are just horrid this year and I can’t seem to get ahead of them. Frontline seems to get positive reviews… Have you any suggestions ? Have you used Frontline ?

Since Miz Poo and Sugarbutt both have allergies to fleas, we alternate between Advantage and Frontline every three weeks for all the cats. They both seem to work really well, I can’t remember the last time I saw a flea in the house. We have to use it year-round here due to the mild winters, though I’ll admit that in the coldest part of the year we usually go to treating them once a month instead of every three weeks.

Stinkerbelle is perfect where she is sitting. Kiss The CAT!!! 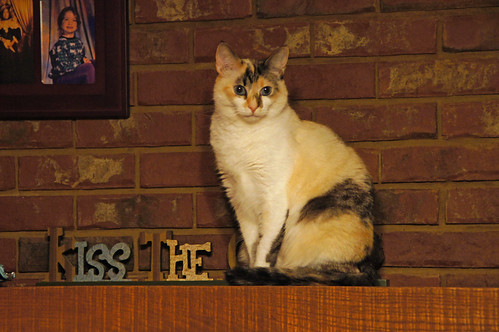 Would you believe I didn’t even notice that when I snapped the picture? It wasn’t ’til I was looking through the pictures that I saw that!

One thing I just realized that you deliver as a bonus with any of the kitties that have graduated from the Crooked Acres Finishing School for Proper Young Kitties: they are quite accustomed to being photographed by the time they leave your care!

So true! Fosters tend to be a little freaked out by the sound of the camera at first, but by the time they’re ready to head off and be adopted, I swear they start to do something and then turn around to look at me like “You might want to grab your camera for this.”

I noticed you’re using Cats Pride Fresh & Light litter and was curious how you like it. I recently switched to it (from Arm & Hammer) & so far I like it better. It seems to clump just as well, and isn’t nearly as dusty. Downside is not everyone has it & I have to drive 40 miles to the closest Pet Smart to get it.

I really like the Fresh & Light litter, but it doesn’t have the long-lasting odor-reducing power of the much, much, MUCH dustier Fresh Step. So at this point, I use a mixture of Fresh Step, Fresh & Light, and Cat Attract litter in all the litter boxes. I only use a thin layer of Fresh Step in the bottom, fill the box almost the rest of the way with Fresh & Light, and then a thin layer of Cat Attract on the top. I add Cat Attract to all the litter boxes on Fridays, and every three weeks the litter boxes are emptied, scrubbed, and refilled with fresh litter. (I have a staggered schedule so that the trash guys aren’t overloaded with all that litter.) (Okay, I’m SUPPOSED TO have a staggered schedule, but I’m not great at it, so sometimes the trash guys curse my name, I’m sure.)

We get our Fresh & Light at Walmart. Fred tends to go to Walmart very early on Saturday mornings, so I ask him to pick up a couple of boxes for me. I get my Fresh Step at Sam’s (40 lbs, less than $12. I wish it wasn’t so DUSTY!), and I have to stock up on Cat Attract when Petsmart’s having a sale.

I knew I’d seen a picture of Fred with a bird on his shoulder, but I just remembered where. It’s on his Amazon author page!

I knew he was using it SOMEWHERE, I just couldn’t remember where. I was thinking it was on Twitter, and a quick check of his Twitter profile just now shows that he is using it over there, too. I guess he likes that picture. 🙂

Had to share this with you and I’m so glad this doesn’t happen at my house!

That cracks me UP! (I’m glad it doesn’t happen at my house, too!)

I just shared with my husband the bit about being able to introduce a new chicken to the flock overnight. He wants to know: if you introduce a new hen during the day and the flock rejects her, do they remember the next morning that they rejected her or do they still wake up and think she was always there?

I would suspect that yes, they’d still think she was always there. But to be honest, we’ve introduced new chickens to the flock during the day, and haven’t had issues. I wonder if that’s because we have so many of them that they just don’t know who’s new and who isn’t!

Fred’s Chicken on the shoulder pix rock! I would be so scared it would peck my eye out. Chicken Whisperer=Fred. 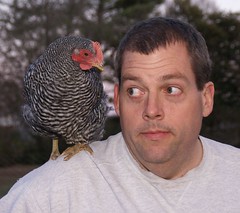 That chicken was actually one of the friendliest chickens we’ve ever had. He let Fred pick him up all the time, and never squawked or fought. We named him Mr. Friendly.

Call me a skimmer, but what’s up with Rupert’s ear? I’m probably a panicky weirdo, but it looks like pictures I’ve seen of skin cancer on white cats. 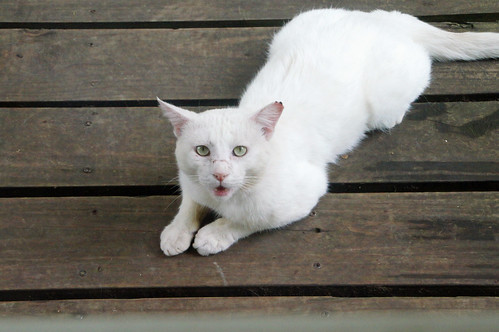 We had it tipped so that anyone who sees him wandering around will know that he’s been neutered. When we had him neutered and tipped, we thought he was feral and might end up moving along, but now we know better! In the pictures and video, his ear hadn’t completely healed, there was some dried blood on the end.

Speaking of Rupert, last weekend Fred’s parents stopped by for a few minutes. Fred wanted them to see Rupert (oh, Fred is SO in love with Rupert, he thinks he’s the most beautiful boy EVER), so he picked Rupert up and carried him over to his parents, and Rupert just sat there in Fred’s arms, completely unconcerned that there were strangers petting him. Yeah, totally feral cat we’ve got there, huh?

Do you remember which seller(s) on Etsy for the baskets? What are the approximate dimensions and approximate costs? Thanks! 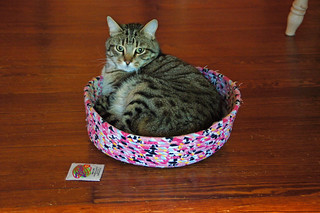 OK so here’s my question: I have this fancy wool rug that I spent a lot of money on and for whatever reason, my cats LOVE rolling around on it and pulling out the threads. It is MAKING ME CRAZY. I tried the no-scratch sprays and they seem to LOVE the scent, as it gets a lot worse after I treat the rugs. Maybe I should set up a Blender Defender near the rug!!! Sheesh. Anybody have any tips to keep jerk cats from ruining your wool rugs?

That is an excellent question, and I have no suggestions aside from rolling up the rug and stashing it in the garage, because cats are jerks.

Readers, suggestions? (I do like the blender defender idea, and only ask that you set up a camera to document the scaring of the cats!)

Just curious… how many chickens do y’all have now?

According to Fred, we have about 75ish at the moment.

Gracie in the second picture looks like this face. 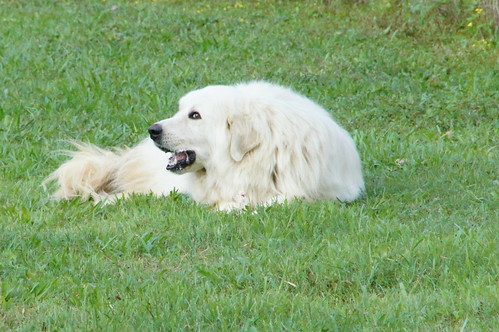 I got a quick update on Emmy yesterday. She is doing fine, and spending lots of time hanging out on top of the hay in the barn. She seems happy and is eating. She’s not having a lot to do with the other cats, but she seems okay with their existence.

Tina told me that when she let Emmy out of the carrier, Emmy went after her and tried to attack her. I guess girlfriend had had ENOUGH! 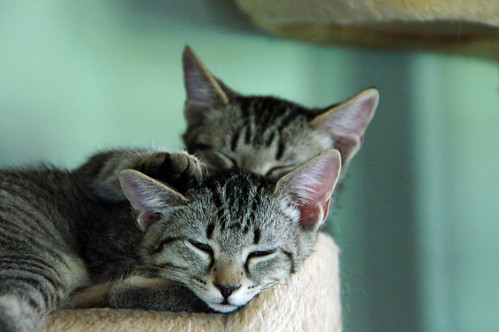 Darwin and Newbery on the cat tree in the front room. 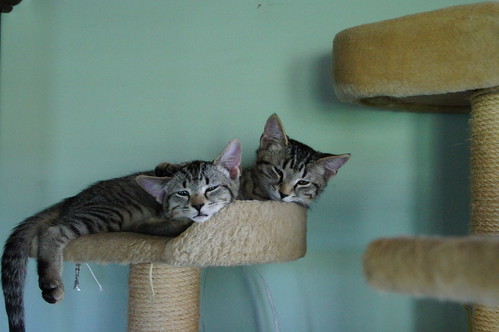 Doesn’t Darwin look thrilled to be a paw rest for her brother? 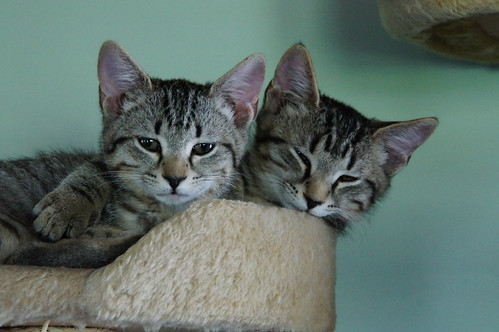 So sweet, these two. 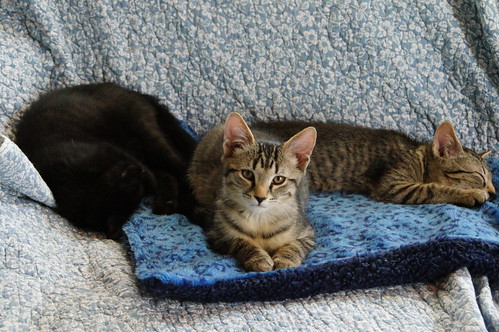 Snoozin’ on the couch (I think Darwin was elsewhere). 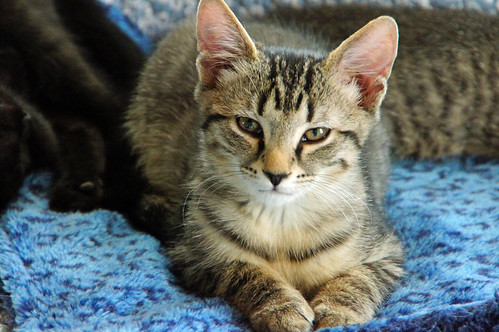 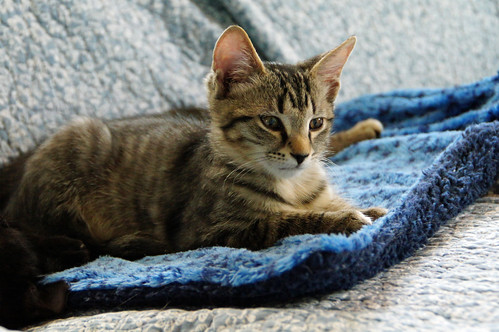 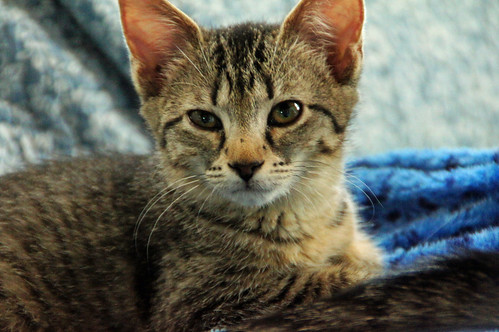 Are you ready for this?

I don’t think you’re ready for this. You should probably sit down. Are you sitting? 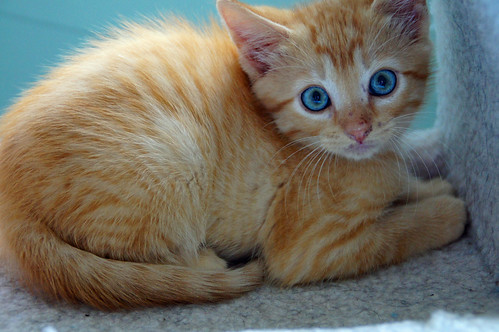 Kennebec is a boy. 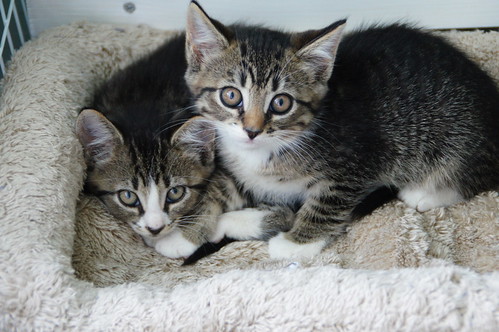 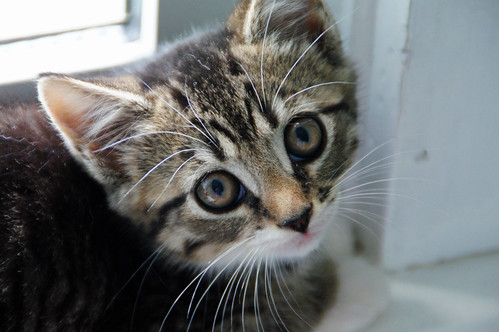 Another shot of Agata. 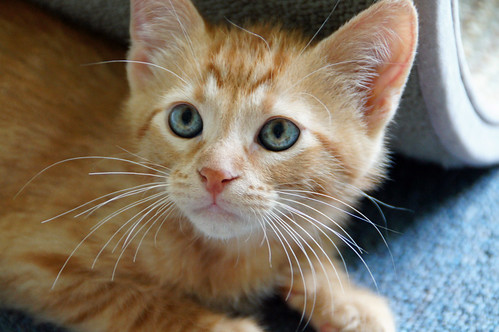 Norland is a boy.

I’m not sure you’re ready for this last picture, though. Seriously. Are you sitting down? 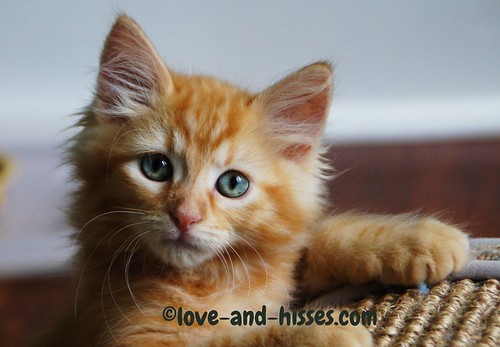 Russet is a boy.

Russet and Norland are from one litter and are around 9 weeks old. They came from a litter of six that were (was?) found in the middle of the road. Another Challenger’s House foster family took the other three kittens. They are SUPER friendly boys, and absolutely full of energy. They both love to be petted and both start purring if you even look their way. SO sweet.

Kennebec, Fianna, and Agata were found near someone’s house without their mother. They are about 6 weeks old, and scared little scaredy cats. They were a bit hissy when I first got them home, but after a few hours they weren’t hissing and they let me pet them.
They weren’t necessarily ENJOYING being petted, but they were allowing it. I’m not worried about them, I sense that they’ll come around soon enough.

Collectively, this litter of kittens will be known as the Taters. Thank you to Smocha, who suggested the naming theme to me in May of 2010 (and probably doesn’t remember making the suggestion, it’s been so long!) 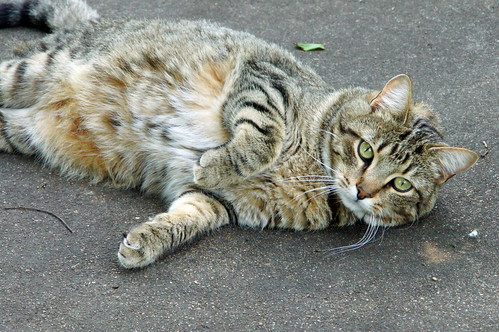 “Who, me? Just rolling around on the concrete…” 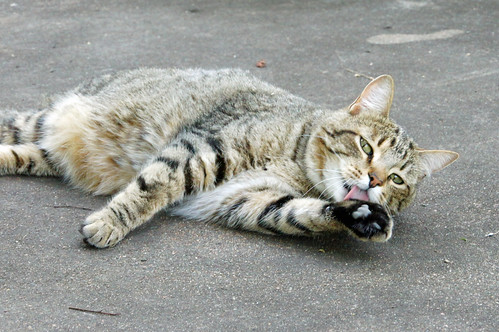 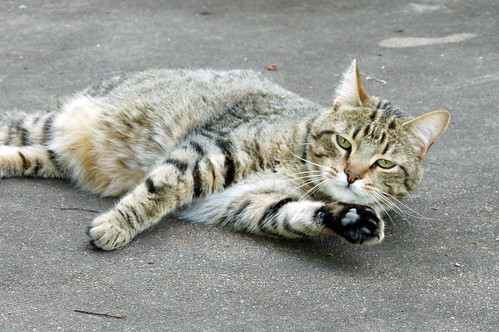