Look at the ears on this little monkey (left), and how he grew into them! Laura said: This is my beloved Spike as a baby. He could fly to Guam with those ears right?

Also, let your readers know that cats are excellent therapy cats. My mom had a stroke over the summer and I moved my parents in with me in the fall. All six of my cats have proven to be fantastic motivation and help with therapy even if it is just to listen. They can get in close where dogs might not be able to.

Thanks for sharing, Laura!

(Note: Spike isn’t a former foster – Laura sent me the pictures so I could admire those amazing ears, and I thought I’d share!)

I spent a good part of yesterday going through the 1200+ pictures that I took while the Fakers were here with us, trying to narrow pictures of kittens down to 20 pictures each so I could do collages that wouldn’t be 6 miles long. When I couldn’t do it, I decided to make videos instead. There are 28 pictures of Art Vandelay (now Patches) and 30 pictures of Bert Macklin (now Periwinkle). The videos are fairly short – less than 30 seconds each – and well worth a watch.

Of course, now that they’re made and uploaded, I’m thinking I should have put in some background music (maybe purring).

I’ll do 2 kittens each day, and finish up with Regina and whatever else strikes my fancy on Friday.

The fast versions (1 second per picture)

The much slower versions (4 seconds per picture)

When I was going through pictures yesterday, choosing the ones to include, these two made me laugh out loud. 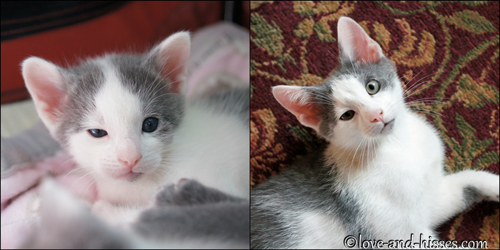 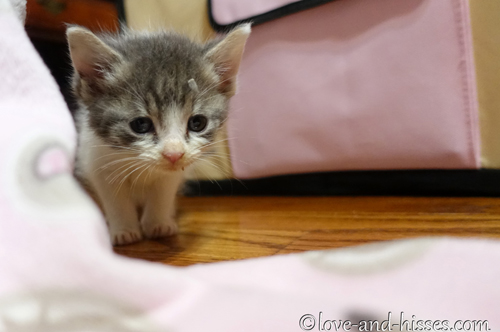 Barnaby’s got food on his face, and some lint or something on his forehead. Silly boy. 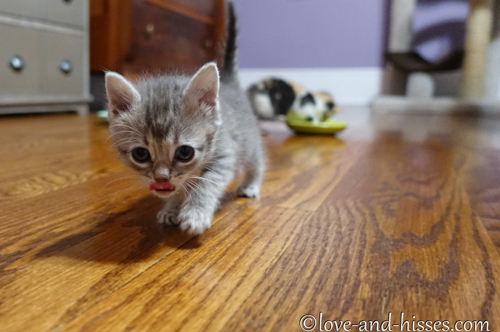 Squeek’s got a full belly and a ::thlurrrp!:: going on. No surprise, Bubble is still bellied up to the plate of food back there. 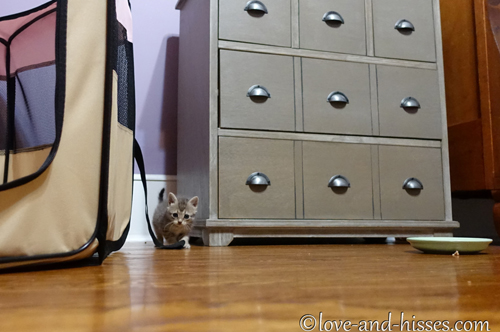 There’s a strap attached to the playpen, and these kittens LOVE to fight with it. 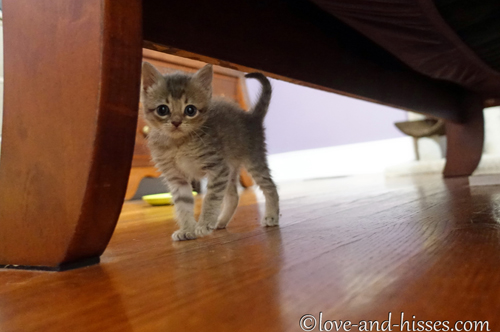 Squeek’s full of humping-up-running-sideways moments, I’m just having a hard time capturing them! 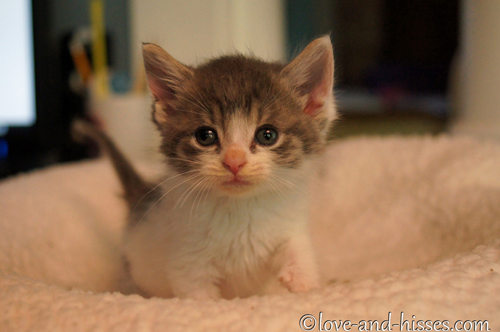 Barnaby, visiting with Fred on his desk. He decided that this bed was purty darn comfy, thank you. 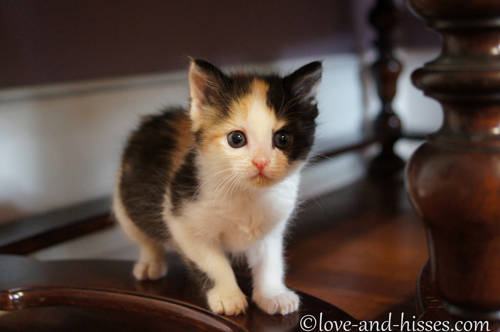 If that isn’t a guilty face, I don’t know what is. 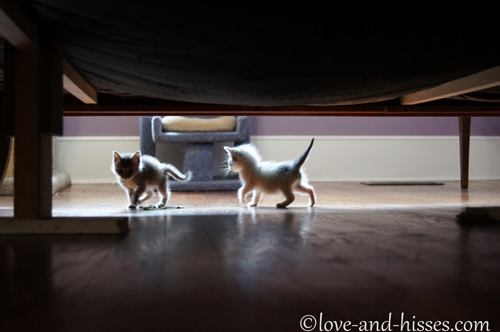 Not the clearest picture, but I think it gives you a decent idea of just how tiny Squeek (left) and Barnaby are.

The kittens are doing great – I think they’ve spent their last night in the tub, though. They always look super annoyed – and a little heartbroken – to be confined to the bathtub at night, so starting tonight I’m going to let them have the run of the bathroom floor at night, which will give them a little more room to stretch their legs. 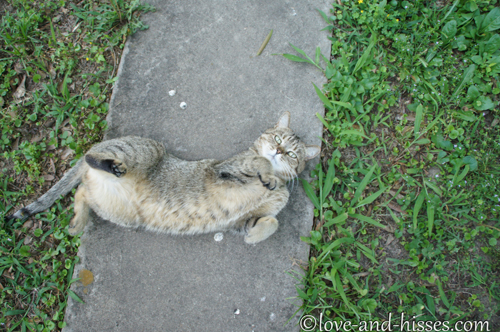 I like to take Kara’s collar off so it doesn’t ruin my pictures of her, but then she rolls around on the concrete like this, all undignified. The horror!