What does Kara have around her neck?

Kara wears a collar to keep her in the back yard. If she goes too close to the fence, the collar beeps a warning. If she keeps going, she gets a short, unpleasant zap through her collar. We’ve managed to make it so that none of the other cats can get over the fence, but if she isn’t wearing her collar, Kara somehow manages to find a way. We want to keep her safe, whether she likes it or not.

I love how Khaleesi’s markings look like a big ol’ circle marking her preggy side belly! “Here there be kittens!”

The best part is that the center of her “bullseye” is where she’s the widest!

For the birds. We have two barn cats that are major hunters and we wanted to do something to help the birds. I did some looking around on the internet and found these cat bibs. The one cat was too good of a hunter even with the large bib, so I got some neoprene and made him an even bigger bib. They have been working great. I have not had any half alive birds or piles of feathers since. I check the bibs and collars whenever I pick them up and make sure all is well. I also ordered the break away collars to go with the bibs and they have been great. We lost one bib early on.. but I found it. I think we have been using the bibs for about 6 months. They will not help much with baby birds who can’t get away, but it has helped with the adults.

How neat is that? Thanks for the link!

Khalessi is definitely a classic, or blotched tabby patterned cat. Aside from one problematic side near the back, she looks non-dilute. There are a couple of ways to get ‘dilute orange’ colors without being genetically orange. One is the ‘rufousing’ color that makes a brown tabby brown. Cats with high levels of that can look nearly orange in places. Low rufousing gives a ‘grey’ tabby, even though the stripes are still black.

Another reason could be that the region is part of the agouti hairs between stripes, and the bands naturally make the area paler. 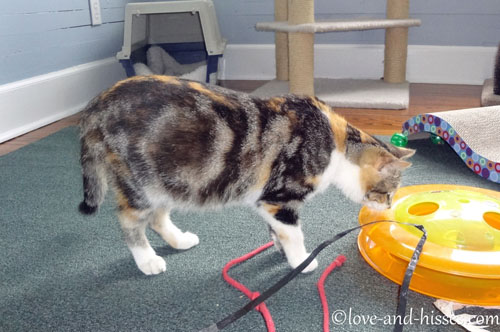 When I look at the picture with the yellow toy, the agouti hairs appear paler grey with black stripes, and the bulls eye and back looks flat and less black. On the other side, the agouti hairs look redder, as in a brown tabby. There is a gene that makes silver cats silver, which would make all hairs be white at the base, stripes and agouti hairs. But here this would only have to be present on half the cat.

I’ve noticed that when I trim my black cat’s hairs, he looks duller and grey, as color fades away from the tip. Perhaps the hair on that one side is damaged.

And now that the mild explanations are out, the wild answer could be that she is a chimera – two different genetic cats mixed together.

But my guess is that the big difference is the rufousing being present on one side and mostly absent on the other.

Thank you for that answer, OldCat!

Welcome Khaleesi. I have to admit, I didn’t hit the button to hear it (I am at work), but I have visions of it sounding like calici…which means in my head she is now named after a virus. sorry – had to throw that out there. 🙂

When Susan dropped Khaleesi off with me and I told her what I’d decided to name her, she said “Like Calicivirus?!” The word sounded familiar, and so I Googled it. Of course I’d heard of it before, but I’d never heard it pronounced (only read about it), and somehow I’d missed that there were two Is in it, so I’d always pronounced it (to myself) as “Calsi.” All of this is to say that you are not alone in thinking “Calicivirus” when you see her name!

This seems an appropriate place for this link: 12 Cats Plotting to Kill Their Owners!

In response to the question about the kitty who likes to swat with claws out: I have found that my kittes are less likely to use their claws when they have been clipped. It seems as though they are thinking “well since my claws won’t catch even if I do extend them, why bother to try?”

Any one else notice this in their kitties?

I haven’t noticed that with mine, actually – in fact, we had to trim Khaleesi’s claws because when she climbs into my lap she immediately starts kneading on my leg – HARD – and I was afraid she was going to shred me. We trimmed her claws, and she still kneads just as hard. It doesn’t hurt as much, though! Aslan, considering whether he wants to skitter sideways at one of his siblings. Or just stare at the blanket. Hey, it’s a hard decision. Charming waits breathlessly to see what Aslan will do. Leia rolls around in the sun. She’s an alert mama, always keeping her eyes on the babies. “What going on over HERE, Mama?” You know? I just can’t even. Kill me dead, why dontcha?

I weighed the kittens last night (you can see their weights at the bottom of their page). Pork Chop Charming is racing for a pound and a half at a month old. Judging by the length of his legs and the size of his paws, not to mention his current weight, I think he is going to be one big boy! Jareth, who was the smallest at birth and stayed that way for a while, is now bigger than both of the girls. They’re growing SO fast – yesterday was the first day I walked into the room and was just blown away by how much they look like little cats now.

Now, a video. Those kittens are just rude and rotten, and I encourage Kate to kick their butts as often as possible. She might have misheard me when I told her to “kick” Aslan’s butt, though (you can’t really see anything, so it’s not gross, in case you were worried). “Yeah, I’m going to flop down over here, all pregnant and stuff.” “My food bowl appears to be empty, please be filling it.” Khaleesi’s appetite continues to be voracious, so I’m thinking she won’t be having those babies in the next few days, at least. When she does go into labor, I’ll post over on the Facebook page, and then when the labor is done (or if it slows down), I’ll do a post here.

I don’t think it’ll be this weekend, but of course cats love to surprise me, so who knows?