In case you missed it on Saturday, there was a post with a few pictures and information about a Challenger’s House “special needs” kitten, Gracey, and her brother Kaleb. Please spread the word!

I know I’ve mentioned it before, but just in case you live in the area and missed it (or forgot), the Cat Tales fundraiser is coming up in a few weeks. They’re always a lot of fun, there’s a silent auction and raffle, music and food. And it’s casual, so you don’t have to dress up!

If you’ve got anything you can donate for the raffle or silent auction, contact Susan at 256-420-5995, or challengershouse (at) mchsi.com

Yesterday morning I woke up early and lay there thinking “Why am I awake at this godforsaken hour?” Okay, it wasn’t THAT early, but I usually don’t get out of bed until around 6, and it was only 5:30.

When I got up, I saw that Fred had posted the following on Facebook:

Jake just stepped on the alarm mat and started an F-4* catnado that spun through the house in a thunderous roar of feet and claws, leaving a swath of destruction from one end to the other.

The alarm mat in question is a Sofa Scram and it’s located in front of the storage cabinets we have in the computer room. We bought storage cabinets like these to replace the bookcase that was there, because someone was spraying the bottom shelf every so often, which meant I couldn’t put anything on that shelf. It had pretty much ruined the bookcase, so we thought that cabinets with doors would work much better.

And they did, for about three days. Then someone sprayed the front of one of them, and it went under the small space under the door, and was absorbed by the unfinished pressed-board material at the bottom of the door.

(Which is about when my head exploded.)

So as I was desperately surfing around Amazon, I spotted the Sofa Scram and decided to give it a try. (It was that or a Scat Mat, and some reviews indicated that the Scat Mat is a unreliable and doesn’t always go off. Also, I kinda prefer startling the cats over zapping them.) It works wonderfully well – the first couple of days it was there, the cats must have stepped on it 15 times. Since then, though, they know to avoid it (there’s no reason for them to be over there, anyway), although every once in a while someone forgets about it and steps on it.

Which is what happened early yesterday morning, when Jake went looning over by the cabinet, stepped on the mat, and set off a flurry of cats stampeding out of the room.

Never a dull moment around here, I swear. 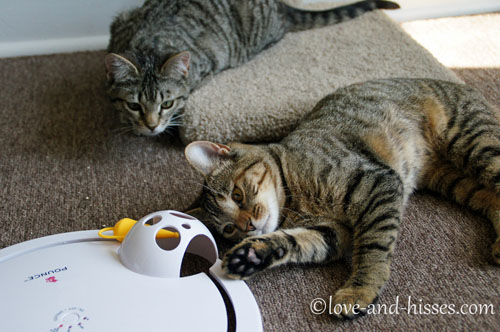 Mariette gets flirty with the Pounce. 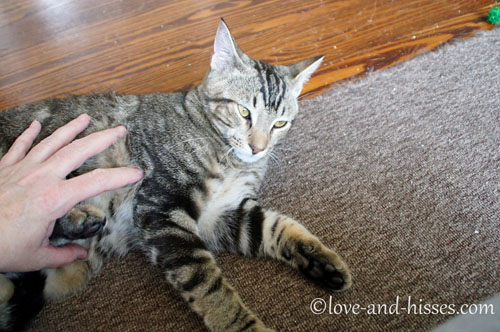 Angelo gets a belly rub. Usually when I start petting him like this, he grabs my hand with both paws and pulls it toward his head so that I’ll scratch his ears. He’s a boy who knows what he likes! 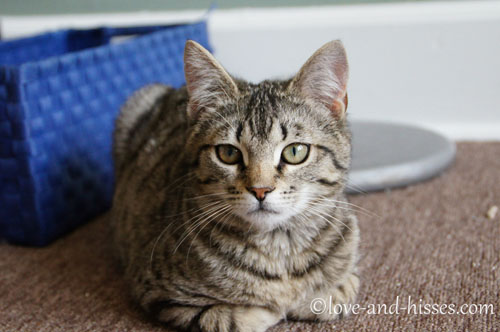 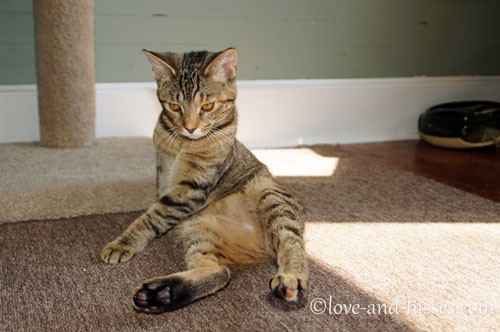 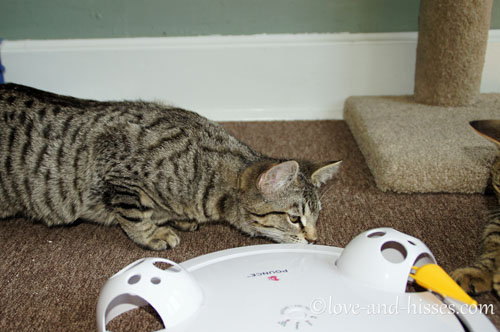 Pounce mouse, Dennis would like you to know that HE knows that YOU are in there. 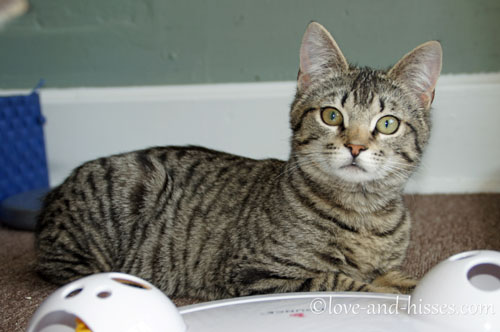 “Doesn’t that mouse KNOW I can see him?!” 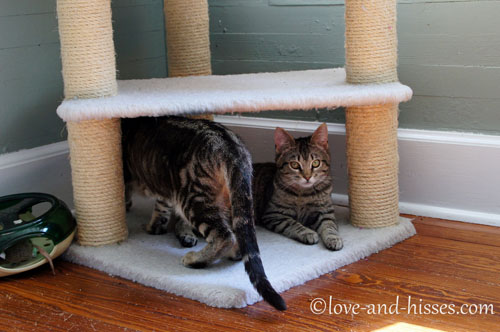 The instant before I got this picture, Angelo’s tail was across Dennis’s face looking very much like a big ol’ mustache. 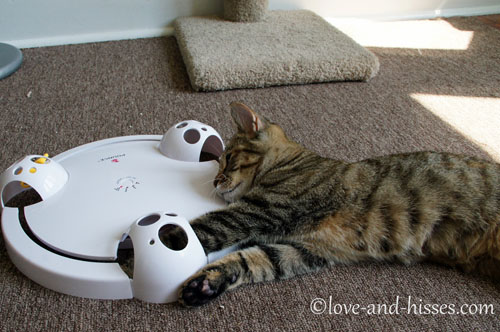 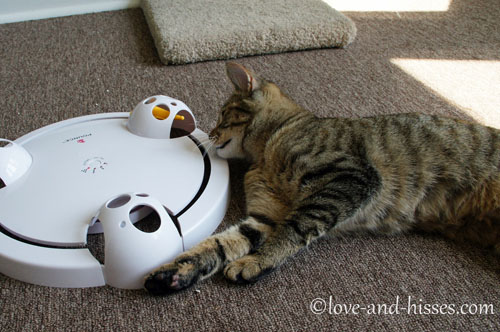 “We meet again, mouse. I knew we would.” 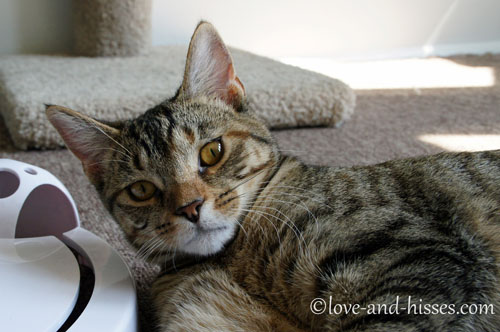 “And there he goes again. That mouse has places to go!” 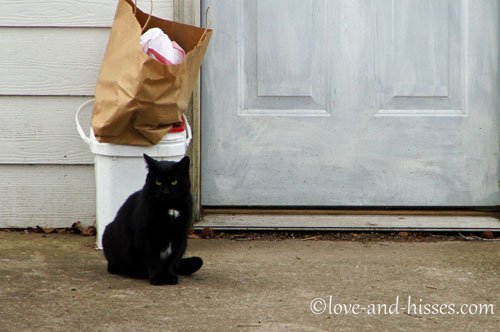 “Lady, if you know what’s good for you, you’ll get over here and let me in the garage NOW.”

That Maxi: so demanding.