Thursday evening, when I went in to hang out with Canasta before bed, she was like this on the couch. 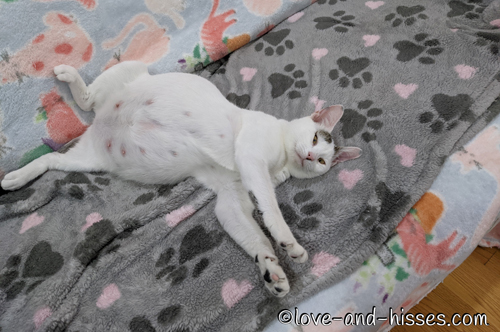 She eventually rolled over and ran over to the plate of food, where she ate every bit of it. I had already told Brittany and Teresa that I thought she’d have her kittens within 24 hours because she kept checking out the crate, her milk was coming in, and she was restless and couldn’t seem to get comfortable. (Brittany predicted she’d start having them within 12 hours – and turns out she was right!) I stayed up with her later than usual, but eventually decided to just go to bed. I checked on her about every hour or so, and she went into the crate a bunch of times, but only stayed for a minute or two. I was awakened at about 4:15 by her HOWWWWWLING at the door at the very top of her lungs. I threw on my clothes and by the time I got to the room, Fred was sitting on the couch with her, rubbing her belly. She was rolling around, purring like crazy.

Fred went off to take his shower and start work, and I settled in on the couch with her. After a while she started having contractions, and I didn’t even try to get her to go into the crate. She wanted to be on the couch with me, wanted me to pet her constantly, and so Fred got a washable pee pad off the shelf, and we put it under her. 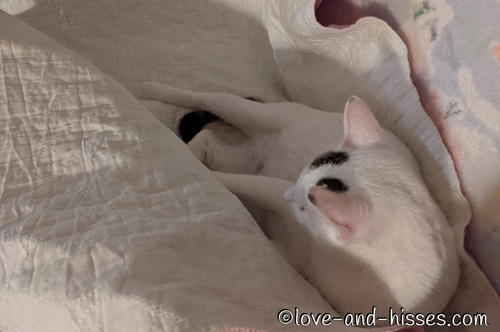 She started laboring even harder, it seemed to go on for a long time, and just as I was wondering whether there was a problem, she birthed kitten #1 at 6:06 am. 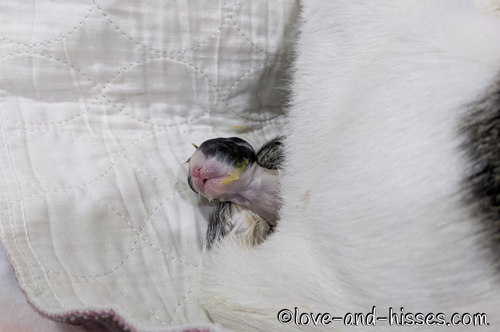 While she cleaned the kitten, she occasionally came over to me for petting, and the kitten crawled all over the place. She settled down for a few minutes to relax before the contractions started again. 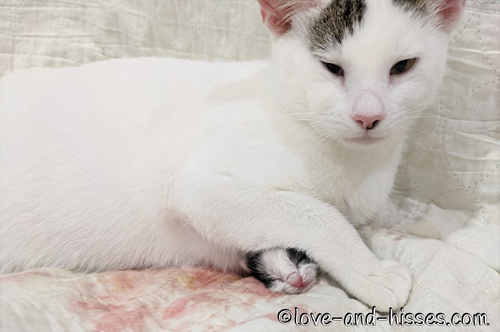 Look at that nice clean baby!

As she labored, the kitten crawled away from her and settled against my leg. Awww. 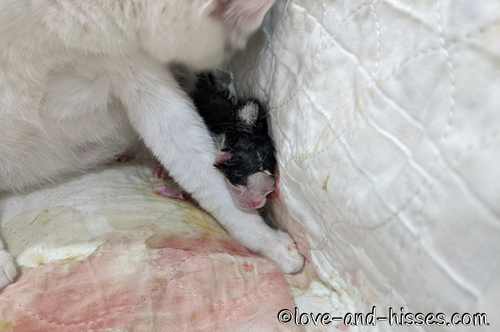 “Ma’am,” I said gently to her, after I’d told her 100 times how amazing she was. “If you’re going to wait an hour between kittens and are going to have 17 kittens, this going to be a really long day. Might you consider stepping it up a bit?”

She started having contractions again. And at 7:42 came kitten #3, a brown tabby and white. 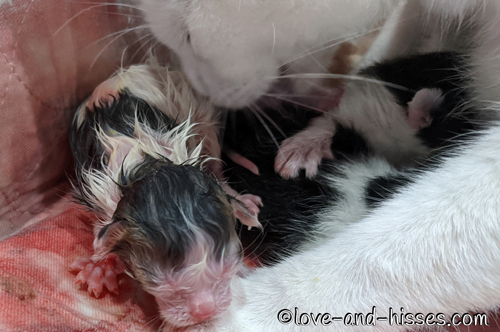 While I didn’t love that she was having her kittens on the couch, I also thought it was fascinating. I’m used to cats going into the crate to give birth; I’ve never had such a closeup view of the process before. I wasn’t worried about any of them rolling off the couch because I had my legs along the side of the couch to stop any rolling. (And the kittens were sticking pretty close to Canasta.)

However, Canasta apparently decided that the couch no longer met her requirements because after she cleaned kitten #3, she picked up one of the first two and hopped down off the couch, headed straight for the crate. I picked up the other two and followed her. She settled into the crate and started cleaning her kittens. Then she took a rest. 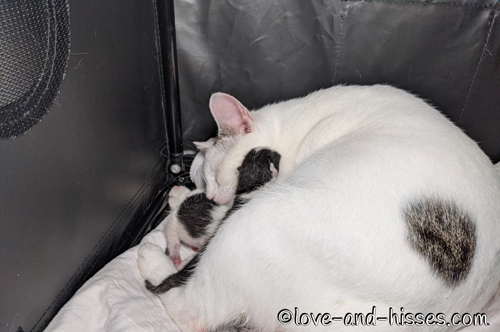 “How funny would it be if she only had three kittens?” I said to Fred. But nay.

After a short nap she started having contractions again, and at 8:57 came kitten #4, a brown tabby and white. 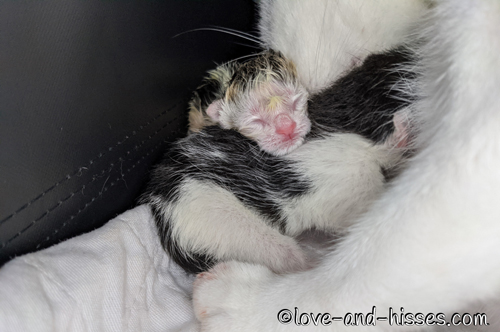 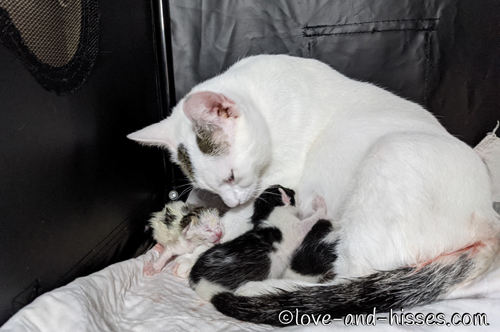 There was a whole lotta nursing going on. 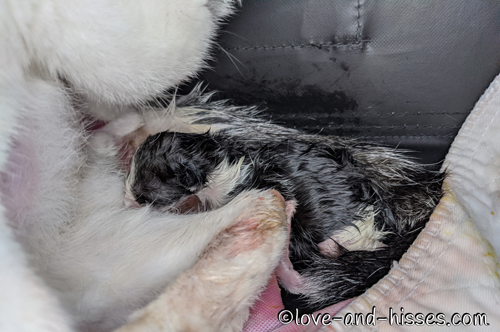 Let me just say that I am thankful that Canasta chose the big crate to give birth in, because I was able to pretty much crawl in there with them so I could see what was going on. Canasta didn’t mind at all. 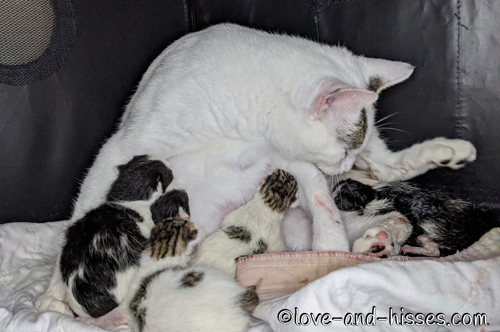 The kittens nursed, Canasta cleaned, and no more contractions seemed to be coming. 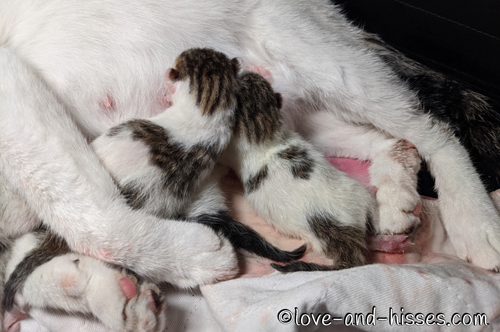 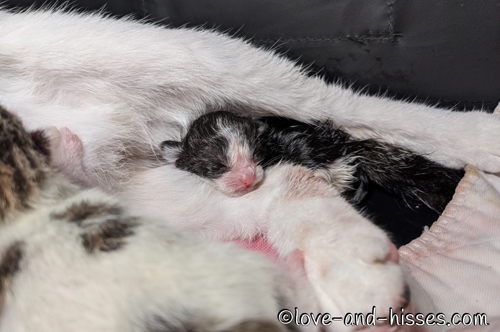 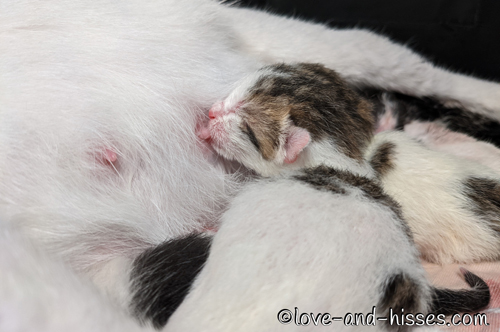 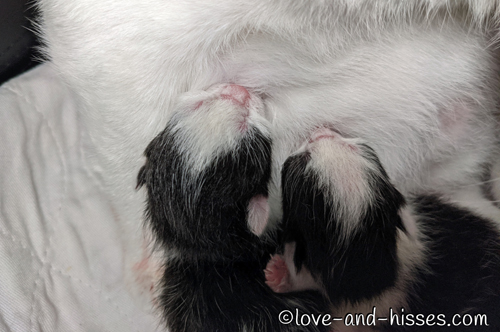 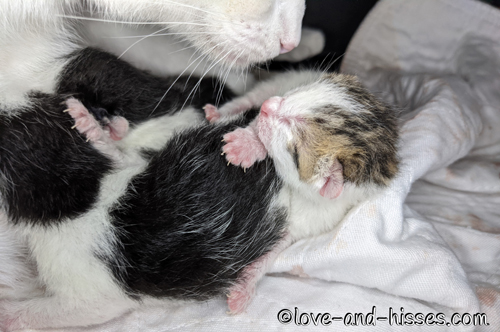 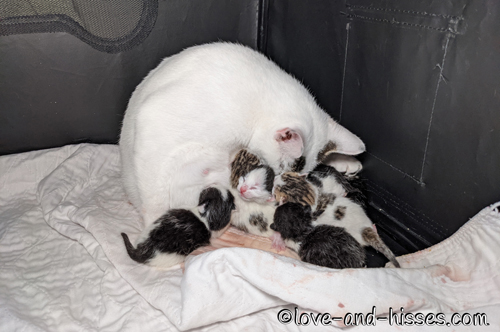 When it had been about an hour and a half since the last kitten was born, I offered her some food (which she pretty much inhaled). 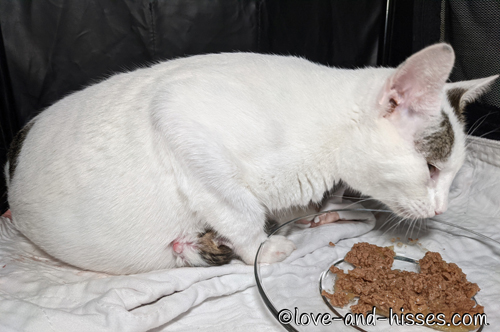 And after a couple more hours, I decided she was probably done, and I was safe to go take a nap. 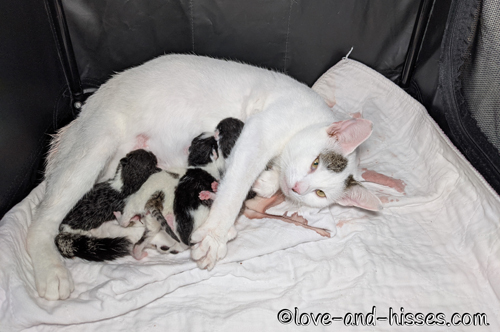 As it turned out (I checked the camera later to see when it had happened), Canasta suddenly started having contractions again and gave birth to kitten #6 at 2:38.

By the time I realized one more kitten had been born, they were clean and snoozing. I counted heads and then counted again, and then basically felt kittens until I found the one that was still a bit damp. 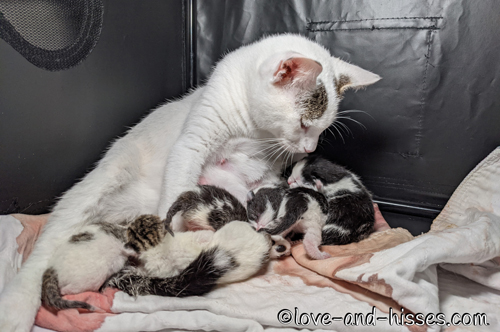 “Six is a good number, I suppose.” 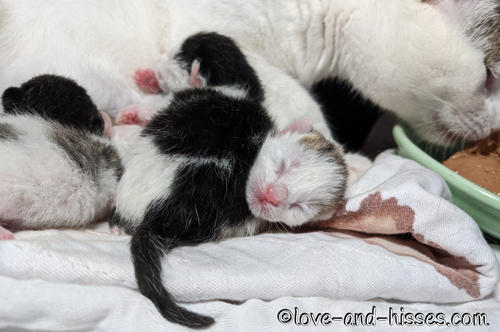 I offered her more food, which she ate. 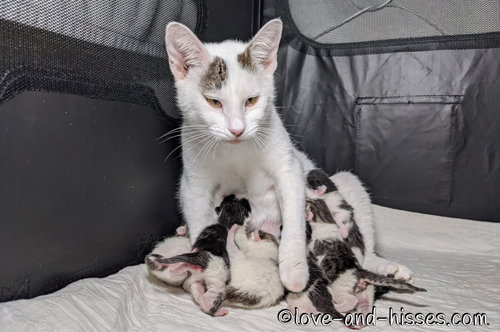 Her look when I said “You did good, mama.” She knows. She KNOWS she did good. 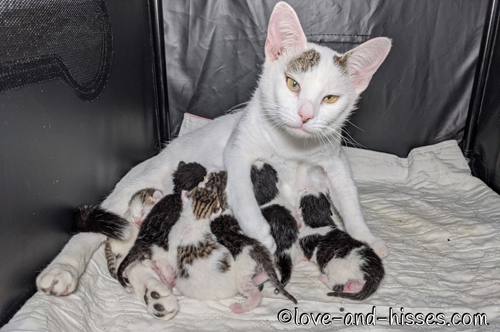 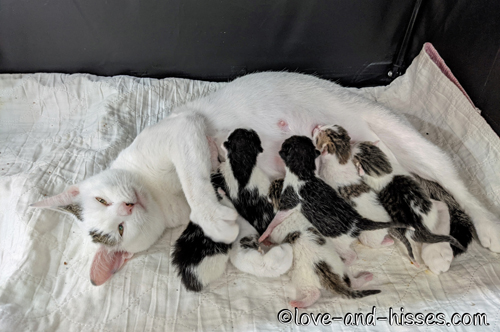 So after making us wait for 47 days – FORTY SEVEN DAYS – not only blowing past Margeaux’s record but also kind of showing off, Canasta’s birthing process was really pretty straightforward with no drama (well, having 3 kittens on the couch might be drama-ish, but that kind of drama I can handle.) Not only did everything go well, but she had what I consider a manageable number of kittens (ie, not more kittens than nipples) and they all seem to be a healthy bunch.

I have taken a look at their back ends and tentatively think we have 2 boys – #2 and #3 – and 4 girls. I have narrowed down the names, got the okay from Michelle and now just have to assign the names to the kittens they belong to, and that will happen either later today or tomorrow (can’t rush it!)

Healthy Mama, healthy babies – let the fun begin! They’ve already started hissing, and it won’t be too much longer before eyes begin a-plinkin’. Canasta has no problem with me handling her kittens though she gets antsy if they start crying; she doesn’t hesitate to come take a kitten away from me if she decides it’s necessary. She’s an amazing, confident mama and is doing a wonderful job. 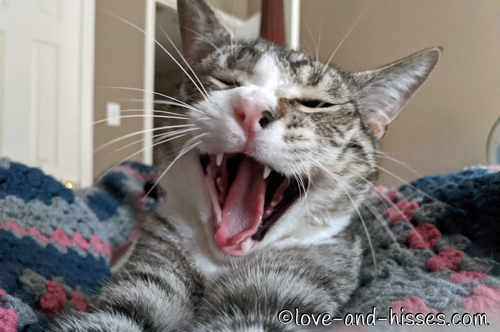 Everyone wants to know how Charlie is dealing with this occurrence. Charlie has spent a little time wailing outside the foster room door, and Saturday evening when I was leaving the room, he slipped through the door into the room. Canasta did NOT like having him in there (there was a lot of smacking and hissing – not playful hissing, SERIOUS hissing, especially when he got near the crate.) I had to chase him around the room to catch him and put him out. For now, Charlie is not welcome in the foster room, and I’m going to be more vigilant about keeping him out. Maybe when the kittens get older, she’ll be amenable to having him in there. If not, then that’s how it goes – mama is the boss when there are little kittens around.