If you guys could spare some prayers for Leanne, whose sweet kitty Monkey escaped her house last week and hasn’t come home, I know she’d appreciate it. She’s worried sick, and misses him terribly.

A list of all the bottle babies I’ve fostered in the past 10 years! Hamilton J. Porks III, Jefferson, and their two brothers, unnamed. July 2009.
The post about them is here. They were born at an animal control facility in Tennessee and their mother was euthanized immediately after she delivered them; they were given no time at all with her. They weren’t doing well when I got them, and I don’t think they ever really had a chance. They died one by one, no matter what I did. Coming on the heels of losing Mister Boogers unexpectedly just a few weeks earlier, it was as close as I’ve ever come to a nervous breakdown, and six years later it still breaks my heart. I only took a few pictures of them, which you can see here. The Cookies: Lorna Doone, Milano, TimTam, Keebler, and Hydrox (the tuxie). October 2009 (we had JUST gotten the Wonkas off the bottle!)
First post about them.
All their pictures at Flickr. The Bookworms: Bolitar (Buster), Reacher, Rhyme, and Corbett (Corbie). March 2010 (half-siblings to the Wonkas; post about their mother here).
First post about them.
All their pictures at Flickr. 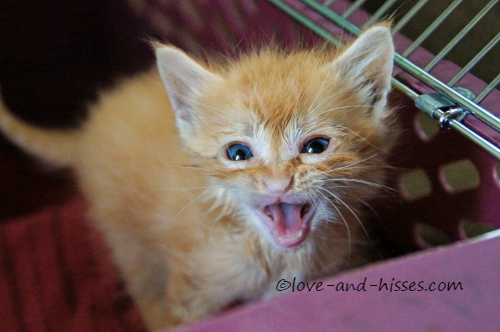 The Squash Bugs – Ambercup, Calabash, Pattypan & Zucchini (Zuke). August 2015.
First post about them.
All their pictures at Flickr.

Honorable Mentions.
(Bottle babies who were only with me for a short time before they moved on to another foster home; I don’t include them in my total number of fosters.) Ike – September 2009.
Ike was only with us a few days before he moved to another foster home, and I only did a couple of posts about him – here and here.
All his pictures (there aren’t many) at Flickr. 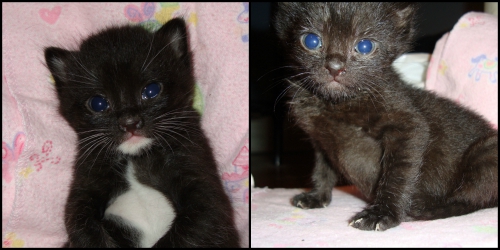 Sootie and Sweepie. November 2009.
These two started out as kittens I was babysitting – the woman who found them on her back patio wanted to keep them, but couldn’t take them to work with her. So when she worked, I babysat. That happened a couple of times, and then her father – in Texas – was very sick and went into the hospital, so she turned them over to Challenger’s House. I was in the midst of the Wonka-Cookie insanity and so they went to another foster mom, Heaven, who named and raised them. Interestingly, the woman who adopted Sootie (now named Ash) adopted Baby Beans (now Beans) a few years later, and then Jon Snow the year after that!
I wrote about these two here, here, and here.

Edited to add: And I babysat a little bottle baby trio for another foster mom for the weekend in August 2013! They were utterly adorable – Butter (orange tabby) and his two brown tabby sisters, whose names I never could remember. They were awfully adorable and kinda sassy and I can’t believe I forgot to include them. I posted about them here and here. So, that’s… 36 bottle babies I’ve fostered, plus the three who moved on to another fosterer. I had a whopping SIXTEEN bottle babies in 2009, but never more than one litter being bottle fed at the same time (by the time I got the Cookies, the Wonkas were eating on their own). This year I’ve had 11 bottle babies (I KNOW, I KNOW, THE YEAR’S NOT OVER YET), with 8 of them being bottle fed at the same time, which wasn’t so bad since I had their feeding times staggered so I could do each litter separately.

With Combo, I’m now at a total of 282 fosters. I think when I reach 300 fosters, I get a golden litter box or something? This picture cracks me up – Badger and Skinny Pete having a quiet moment of contemplation and Combo’s all “HEY GUYS I THINK SHE’S GONNA GIVE ME THE BOTTLE!” Combo and his tiny tongue. Badger has a full belly, a messy face, and the need to roll around and have his tummy rubbed. Skinny Pete (I think) in the front, with Combo to the side and back a bit. I had to clean some goo off Badger’s head with a damp washcloth, and he wasn’t sure he was so crazy about that, but he DID think it was better than a full-on bath. All 8 SwimBugs are (mostly) presented and accounted for! (Ambercup is going into the wall tree condo, behind Phelps.) Zuke and his Crazy Eyes take a stretch. Another shot of all 8! And another! It would have been nice to have them all looking directly at me, but I’ll take what I can get. Phelps (left) and Zuke. I weighed them last night, and Zuke only outweighs Phelps by 1 1/2 ounces. That “What the-?!” look on Pattypan’s face is cracking me UP. They love to sit on top of that scratching post. I’ve even seen them sleep on it from time to time. Calabash is all “COME HERE I GONNA KILL YOU!”
Pattypan’s all “::thlurrrp:: BRING IT ON!”
Spitz (behind the scratching post) is all “What’s she…?” Pattypan. I love her markings. Dennis reminds me SO much of Corbie in this picture.

By the way, I HIGHLY recommend that bed that Dennis is curled up in. I got it on Amazon after reading about it somewhere – possibly at Hausepanther – and Dennis, Archie and Stefan are always taking turns in it. I’ve actually seen most of the cats in it at one point or another. It’s the perfect size for them. I ordered a couple more (because, um, shaddup) and put one in the front room and took the other upstairs. The kittens aren’t as enamored of it as the adult cats, so I’m guessing there’s something about the size that really appeals to them.

It does come with a little packet of catnip, which I didn’t need to use.

Previously
2014: It’s guaranteed that when you see Stinkerbelle looking this smug, there’s sure to be a Tommy nearby.
2013: Getting REALLY flirty.
2012: When Polly jumped down to examine the room more closely, Dandelion wasn’t quite sure if the Stranger Danger Floof was called for, so she just put on her medium suit instead of going Full Suit.
2011: No entry.
2010: What cracked me up is that Maxi didn’t even stick her paw through the fence to smack Corby, and he still fell over like she’d made contact.
2009: Obviously the only way to get a decent shot of all six of them, they need to be drugged and very, very sleepy.
2008: The Godfather Catmother
2007: Y’all KNOW I wasn’t going to turn down the chance to bring them home for a few days, so Saturday morning I went and got them.
2006: No entry.
2005: No entry.