Belle and her kittens (Mrs. Potts, Gaston, Lumiere, and Chip) and orphaned kittens Agnes and Ressler came to us on June 29, 2017.

Belle and her four 10 day old kittens were found by a local radio personality in rural Alabama. They spent a few weeks at the shelter waiting for our foster room to open up, and they came to us at about 8 weeks old.

At the same time Agnes (who was found by the side of the road near a deceased sibling and turned over to Challenger’s House) and Ressler (spotted near a road along with three other siblings who scattered and could not be found) needed a place, and so came to us at the same time. Agnes and Ressler are unrelated, but since they were about the same age and needed someone to play with, they’d been playing together for a few weeks. I threw Agnes and Ressler in with Belle and her kittens and hoped for the best. There was very little drama (Agnes did a lot of spitting that first day), and Belle pretty much accepted Agnes and Ressler as her own kittens almost immediately. Currently, they all play together like they’ve always been siblings.

You can read about Belle and the Beasts beginning here. There are links at the top and bottom of each entry; click on the one on the right to take you to the next entry. Note: I went to visit them while they were at the shelter several times. You can see posts with pictures of them in the posts for May 12th, May 18th, June 7th, June 12th, and June 26th. Initially I was planning to give them Wild West names (thus the reason Belle is referred to as “Belle Starr” in the earlier posts), but the radio personality who’d turned them over to Challenger’s House wanted to have a naming contest, and so we ended up with a Beauty and the Beast theme, which I think worked out pretty well not least because it allowed Belle to remain Belle.

How far will we go to get our cats adopted? We called in renowned cat whisperer Purrcy Catcher to talk to Mrs. Potts. Mrs. P was quite flirty with Purrcy. She explained that, while she appreciates the name given to her by her fantastic foster mom, it doesn’t really fit a young, vibrant girl like herself. With her love of adventure and travel, this young lady would prefer to be known as Moana – though you might call her Meow-na, if you’d rather.

Belle and the Beasts are fosters for Challenger’s House. If you’re interested in adopting any of them, please contact Challenger’s House on Facebook or via email at challengershouse@mchsi.com or phone at (256) 420-5995. We are located in North Alabama, in the Huntsville vicinity.

You can see all the pictures taken of Belle and her Beasts here at Flickr, or scroll through them below. 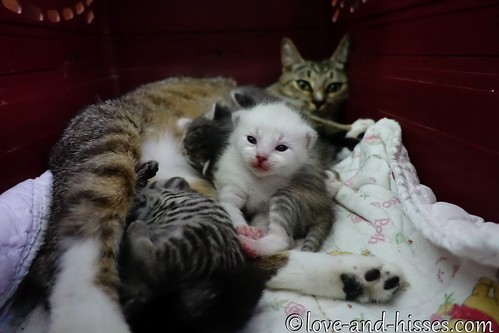