The brown tabbies – Charleston, Chesnee, Iva and Raleigh – came to us on October 9th. They’d been trapped at a local dealership, along with their mother (who was spayed and released). They were a bunch of scaredy cats at first, but slowly came around and now – three weeks after we got them – they’re kittens who’ll run toward the door when I walk into the room, will climb into my lap, and even (grudgingly) put up with being kissed.

A week and a day after the brown tabbies came to us, Charlotte joined the group. She was spotted in a badly overgrown vacant lot, and – lucky for her – Winnie was on the case. She managed to lure her out using an audio clip of a cat meowing. Winnie looked her over, fed her, and turned her over to me. Charlotte had clearly been around people before, was instantly friendly and sweet, and though there was some hissing when I added her to the room of fosters, they got over it pretty quickly.

And two and a half weeks after Charlotte came to us, Winnie trapped Aberdeen. She was found in a location close enough to where Charlotte was trapped that it’s very possible they’re sisters. They certainly look alike! After some initial hissiness between all the kittens, everyone calmed down and they all play together as if they were always together.

You can read about Charleston, Chesnee, Iva & Raleigh beginning here, and Charlotte shows up in the very next post. The first post about Aberdeen is here. There are links at the top and bottom of each entry; click on the one on the right to take you to the next entry.

Update: Charlotte was returned in the summer of 2018 and is currently residing at the Challenger’s House shelter. 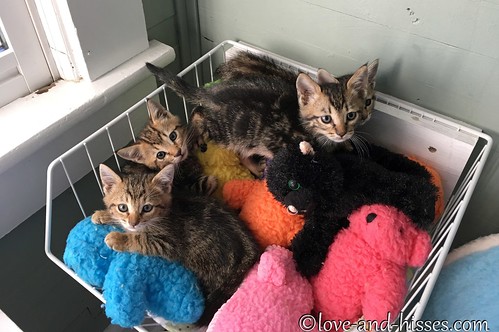