At bedtime Tuesday night, I was very, very sure that we’d have kittens either overnight or first thing in the morning. Not only had Mimosa’s milk come in with a vengeance, but she kept going into the cabinet under the built-in window seat and pushing bedding around. I thought it would be smart to put a camera in that cabinet just in case, and I did.

However, after I went to bed Mimosa went into the cabinet and pushed bedding around some more, making this the view from the Nest camera. 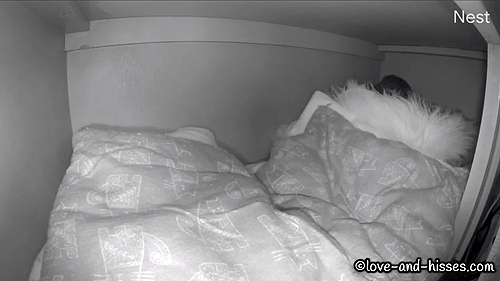 That’s Mimosa way over in the corner.

I went to sleep around midnight (Mimosa was sleeping on the floor), and woke up just about every 45 minutes to check the cameras. Even though I couldn’t see what Mimosa was doing, I could see that she wasn’t staying in the cabinet – she’d go in for a few minutes, dig around, and then go flop on the floor to sleep. I checked on her at 4:45, and then when I woke up at 6 I checked again and could see that she was licking what looked to be a kitten head.

I took a quick shower and went into the room to check on her. 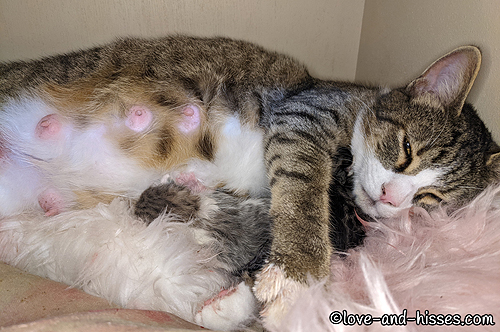 The bedding was soaked, and there were three little kittens squirming around. 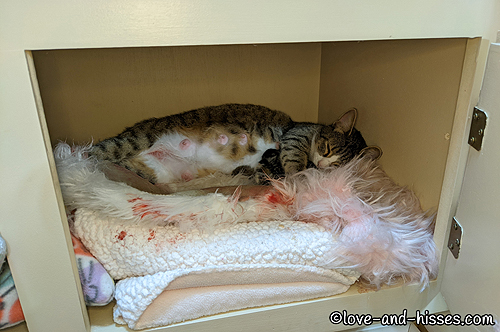 She gave birth in the cabinet on top of all that bedding – thank god for the washer and dryer, and also painted wood. All I had to do to check on her and the kittens was open the door.

I only stayed for a few minutes, because I could tell she wanted her privacy. I told her I’d be back at 8 to check on her (like that meant anything to her), and then I left the room.

Hardest thing I’ve ever done, because I so love to HOVER when my mamas are giving birth. But I did stay away ’til 8, whereupon I went in to see that she’d had two more kittens, one of them a tiny calico. 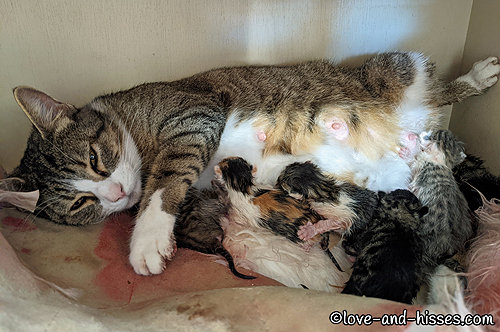 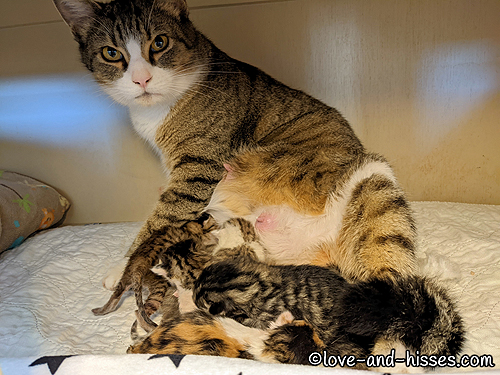 It was time for me to pack up Franco Fondue and head toward our meeting spot, so I told Mimosa I’d be back, and left. Fred checked on her a few times while I was gone, and reported that there were still 5 kittens. The drive down to Clanton (where we were meeting) took me about 2 1/2 hours, I turned Franco over to his new mama, and headed home. The drive home took 3 1/2 hours due to an accident on I-65, and was I ever glad to get home. I into the kitten room to check on Mimosa, and there she was… with 5 kittens. 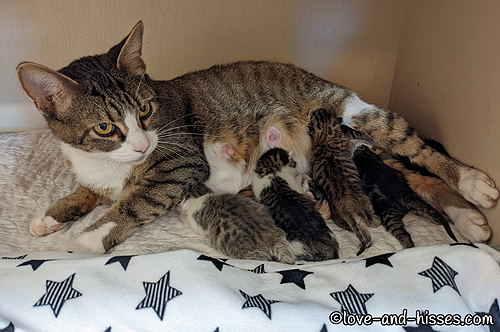 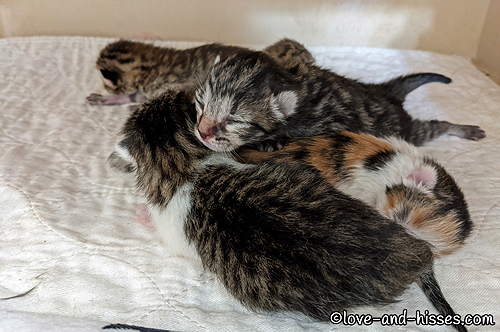 So I guess we’ve got 5 kittens unless Mimosa produces a surprise kitten overnight (I don’t expect her to.) They’re healthy, vigorous little things (see the social media section at the bottom of the page for the pictures and videos I posted yesterday.) I don’t know how many boys/girls we have (though I know the calico is a girl), but we’ll know soon enough I’m sure. I don’t plan to worry about names just yet – probably will get those figured out over the weekend.

PS: Mimosa made it to 34 days. Canasta still holds the record at 47 days!

I sure did enjoy having Franco Fondue here, even if it was just for a day. 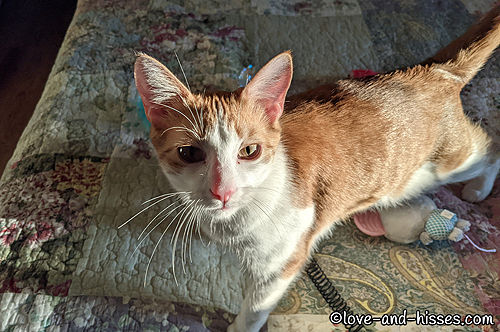 He is SUCH a sweetheart. He slept with me, and every time I woke up and turned over to check on Mimosa, he turned up his purr and head-butted me. 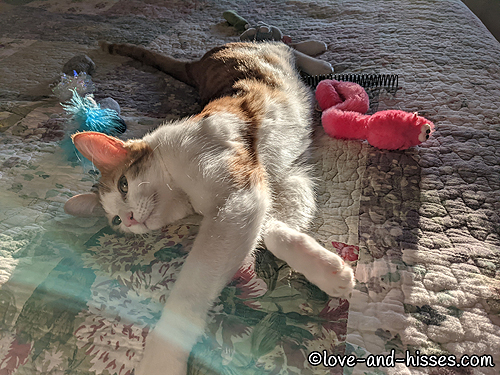 Yes, of course I sent him home with a bag of toys. 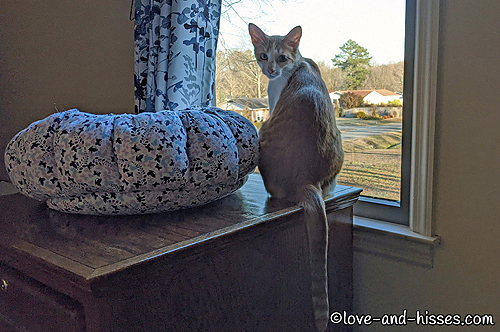 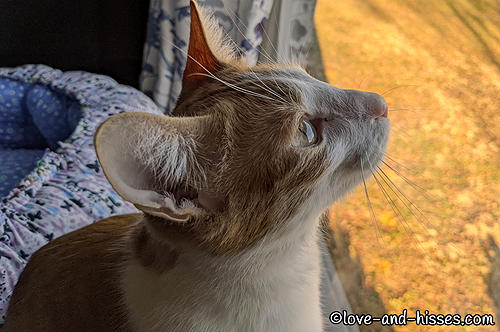 He was a wonderful traveler – I used a big crate in the back seat of my car, one big enough for a litter box (which he didn’t use) and space for a cat bed, where he chilled for the whole drive. He was quiet most of the way, with only the occasional polite “Excuse me, you remember I’m here, right?” I suspect that he is going to have a blast with his brothers, and I can’t wait to see them get reacquainted! (Reminder: you can see him, Alfie Alfredo, and Christopher Chutney over here at Facebook.) 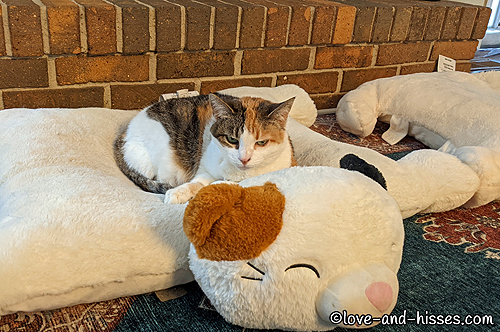 Alice Mo says “‘Scuse you, I’m the only tiny calico this house needs!” 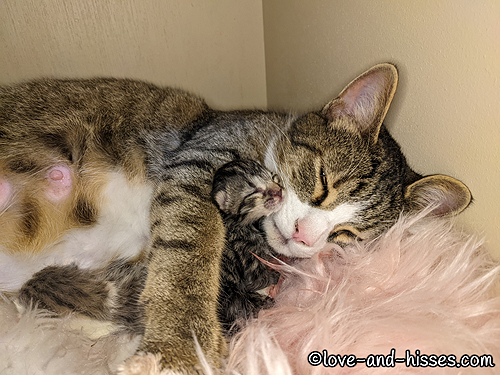 WE HAVE KITTENS! WE HAVE KITTENS! Just after 4:45, she went into labor (I was sleeping, of course), and 1 1/2 hours later we have 3 kittens. She’s not done, but wants her privacy so I’m leaving her alone for now. Looks like 2 brown tabbies and one gray and white tabby, though I haven’t gotten a super close look. I got a short video, give me a little while to get it posted.⁠

YouTube link
WE HAVE KITTENS! Apparently I can count to three, because I do it a zillion times in this video. What can I say? I’m excited! I last checked on Mimosa (via the Nest camera) at 4:45, and between then and 6:15 she had three kittens (and clearly isn’t done yet – she has at least one small contraction during this video.) They appear to be two brown tabbies and one gray and white tabby. She wants her privacy (which I mention 75 times in the video. Did I mention I’m excited?) so I’m leaving her alone for now. 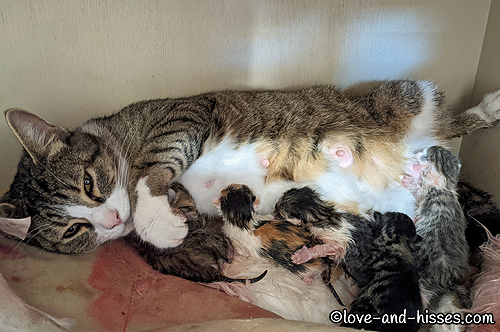 As of right now we’re at 5 kittens – including a tiny calico (eeeeee!) I don’t think she’s done yet.⁠

And yes, I am still taking Franco Fondue – Fred will check on Mimosa, but in any case she’s doing great and doesn’t really need me here.

YouTube link
Kitten video (from earlier – I haven’t been back in. I am trying not to hover!) All look vigorous and healthy and adorable. ❤️ 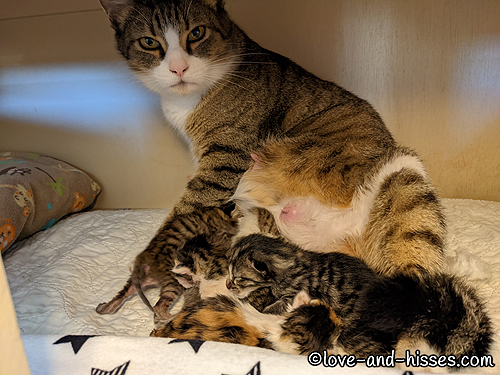 I am leaving here in a few minutes to start Franco Fondue on his journey home; I will be gone for several hours, so don’t expect anything new ’til this evening. Mimosa is still sticking at 5 kittens. Is she done? I don’t know. Maybe! 5 is a good number! She came out to eat some canned food, and I took the opportunity to change out the soaked bedding and give the kittens a once-over. All seem to be doing well! 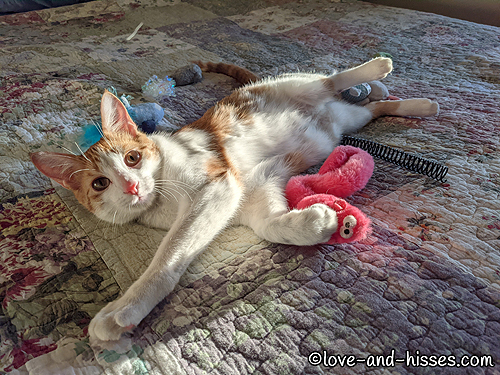 Hooray, hooray, Franco Fondue was adopted today (I didn’t think to get a suitcase picture, sorry)! He joins brothers Alfie Alfredo and Christopher Chutney in his new home, and we get to see them all on Facebook. Happy life, sweet happy boy. ❤️

YouTube link
Looks like we’re stickin’ with 5 kittens! Unless Mimosa produces an overnight surprise (which can certainly happen), I think we’ve got a total of 5 kittens. And I’m going to be able to tell them apart! Very kind of Mimosa to give us a variety pack. 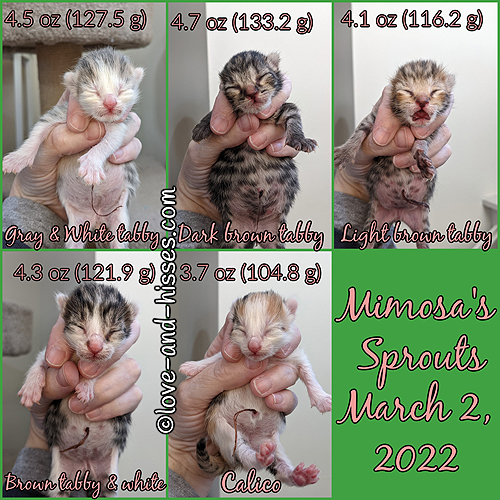 Your first look at each of Mimosa’s Sprouts. They’re in no particular order (or I guess I should say, they’re in the order in which I picked them up and took their pictures), and they’ll be posted in this order from here on out (because it’s easiest for me.)⁠

They’re not named yet, and probably won’t be named until sometime over the weekend. Except for the calico girl, I do not know whether they’re boys or girls. For now I’m referring to them by color (and even that might change – I note that little Gray & White Tabby may have some peach coloring, but that also might be a tinge of blood left over from being born.)⁠ 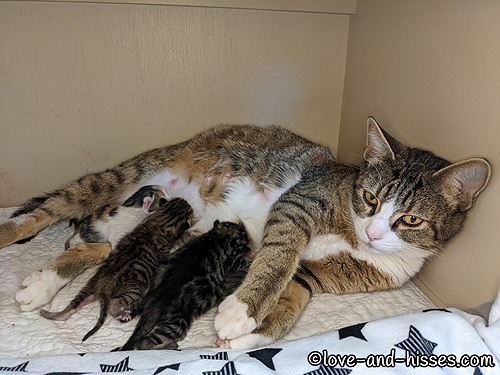