This leaves Dingwall Scotty, Mr. Stripey, and Sungold at Petsmart.

Thanks to Gertie and her Photoshop skills, I now have a picture of all five Pickles looking my way. 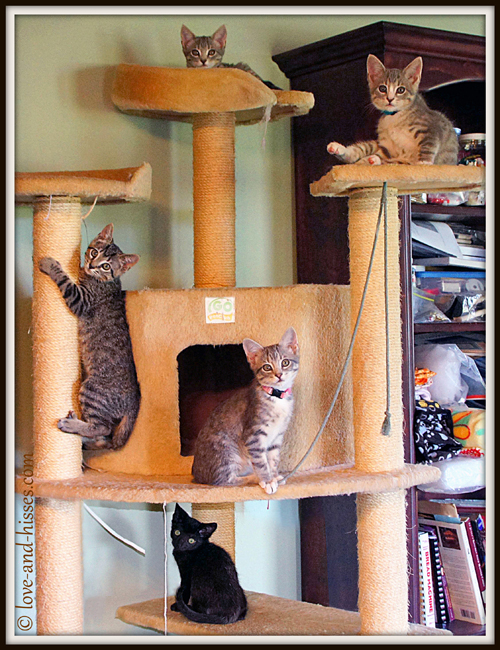 All five Pickles – Polly in the front, Petey using my mouse as a pillow, Percy in the back, Joe on the right, and Magoo between Joe and Polly. All three Weeds! (It’s very hard to get a picture of the three of them together. As soon as they see me, they run over to me. I have to ambush them to get a pic of all three.) Left to right: Percy, Polly and Joe in the front, Magoo in the back. Magoo on the left, Thistle on the lower middle, and Percy.

I carried a pile of clean cat beds from the dryer to the table, where I planned to ignore them and then eventually fold what needed to be folded, and put them all away. Less than three minutes later, I came back and found this. Sugarbutt knows how to make himself at home. One day I’m going to stack all the cat beds in the house in one single stack and set the timer to see how long it takes for a cat to climb in and go to sleep.