In case you missed it over the weekend, I had some sad news about Rupert.

Thank you so much, everyone, for your kind words. It means a lot to us. We miss Rupert a lot and aren’t used to not having him here – every time we see something white outside, we both think for a moment that it’s him before we remember.

Anna D. asked if the other outside cats have noticed that he’s gone. To me, Maxi seems a bit unsettled. She and Rupert had become pretty good friends, to the point where they were usually near each other (though I’m pretty sure she would completely DENY being friends with him), and she seems like she knows something’s not right. She’s getting lots of love and petting, and I’m sure she’ll adjust eventually, it’ll just take time for us all.

And now, on to the good news. First, Fianna was adopted Friday night. Then Saturday, Kennebec was adopted with another Challenger’s House kitten! That means all the Taters have now been adopted.

Interestingly, Kennebec was adopted with a little cutie-pie named Mercedes who was actually from the same litter as Russet (Cap’n Floof) and Norland (General Grumpy), so that’s a neat coincidence.

Still no adoption love for Miss Razzie. I have to say, though, that she’s not suffering. Saturday morning I played with her and snuggled with her at Petsmart, and she was happy and purring and playful. Then I put her back in her cage and she was fine with going back in, so she doesn’t hate being in the cage.

What, you may be asking yourself, was I doing at Petsmart on Saturday morning?

Well, Friday afternoon I got the word that there was room at Petsmart all the ‘Maters, so Saturday morning, early, I took them to Petsmart and got them settled.

Saturday afternoon, BRANDYWINE WAS ADOPTED. Not even 12 hours in the cage for that sweet girl!

Didn’t I tell y’all that she was going to go amazingly, incredibly, super-duper-ly fast? Okay, maybe I tend to say that about all my fosters, but for once, I was right!

So that is why today is ‘Mater Monday. I’m going to share the rest of the ‘Maters pics and a few videos of them. The Pickles will resume tomorrow.

Don’t expect a new litter too soon – we’re taking a short break from having two litters at a time. While we have just (“just!”) the one litter, I’m considering moving the Pickles down to the guest bedroom for a couple of days and repainting the walls and trim of the foster room, which desperately needs it.

But more than likely I’ll wait ’til this Fall when it isn’t so warm and humid and wouldn’t take 63 days for the paint to dry. Also, any time I can procrastinate, I do. It’s one of my many charms. 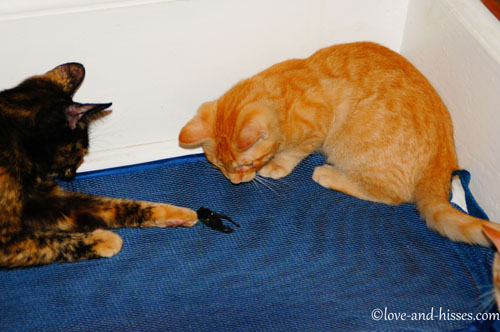 It’s that time of year when the cats find dead or dying Cicadas in the back yard and bring them into the house. Yes, Jake, you are QUITE the hunter, picking up a half-dead bug and carrying it into the house. Brandywine and Mr. Stripey appreciated Jake’s efforts. Until I realized the cicada was still (a little bit) alive, whereupon I scooped it up and took it outside. Last thing I needed was an angry cicada getting his strength back and flying around the house dive-bombing us all. (Note: I don’t know that Cicadas actually (1) get angry or (2) dive bomb people. I’m just assuming they do, following the All Bugs are Evil principle.) 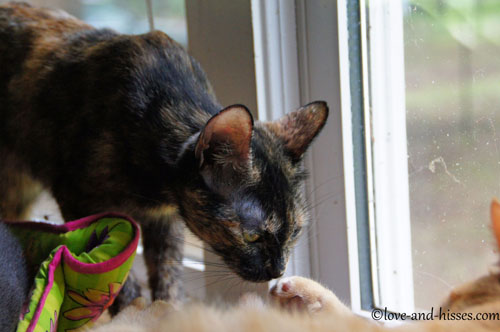 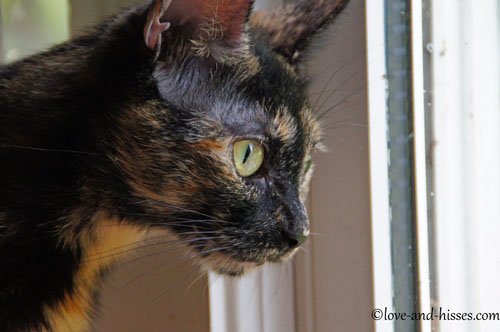 “How does he get them to smell like CHEESE?”
(Side note: I had to call Fred to tell him that if Sugarbutt were a human, he’d be Ron Swanson. No, I don’t know why that thought just struck me.) 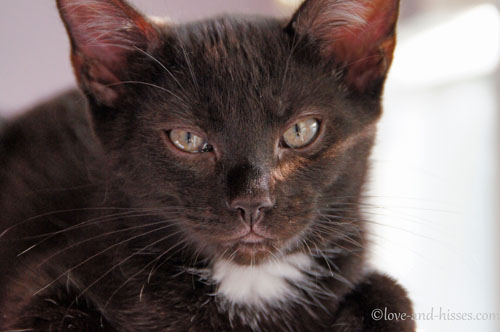 Dingwall Scotty, wearing his bright white dickey. (Did I just have a 10-minute discussion with Fred regarding whether that white patch is more of a dickey or an ascot? Did I really? Fred didn’t know what a dickey was, by the way. Here’s a link for those of you who don’t know what a dickey is. And here’s an ascot.)
Alternate caption: Dingwall Sanders. 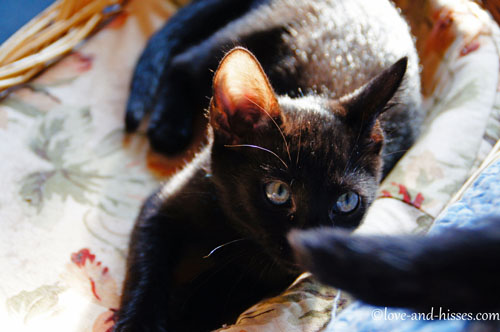 Caspian, keeping an eye on the goings-on. 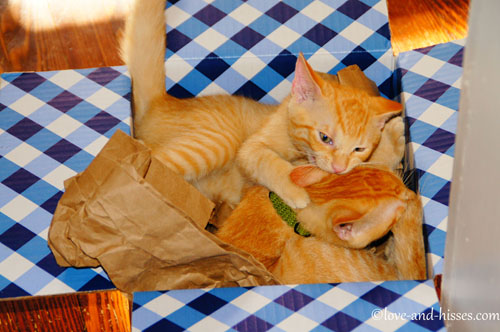 Sungold and Mr. Stripey in the box o’ paper, fighting it out. 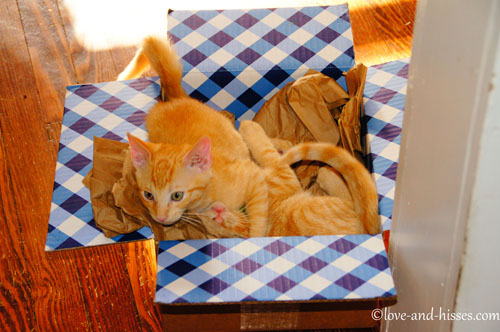 Looks like Mr. Stripey has the upper paw, here. 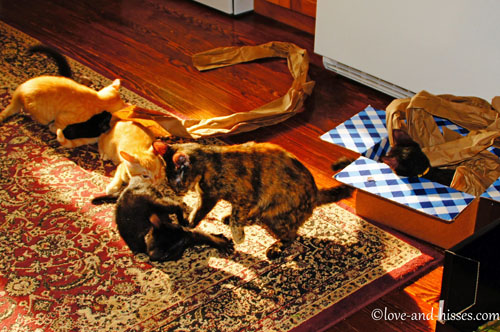 Morning fight club in the kitchen. Note that Wellington stays out of the fray, in the box o’ paper. 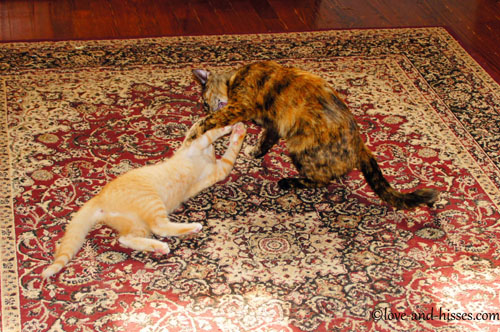 Slappin’ the boy, just ’cause. 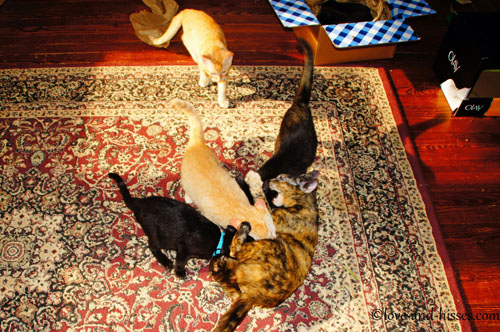 All she wanted was to rest, and HERE THEY CAME. 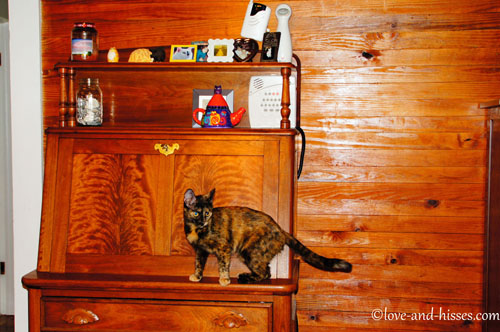 Brandywine discovered that if she goes up here, the kittens can’t get to her. 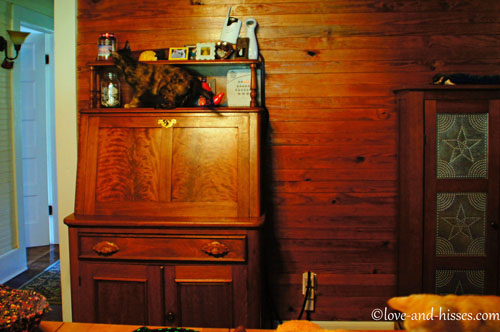 And if she goes up HERE, they especially can’t get to her. 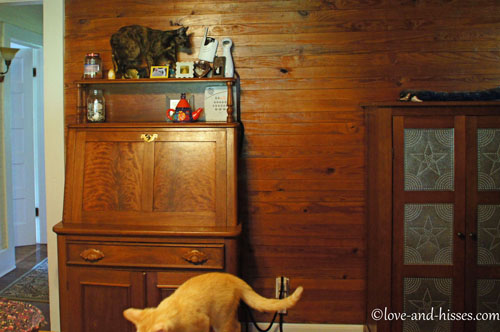 And if she goes allllll the way up HERE, they haven’t got a chance in the world of getting to her! 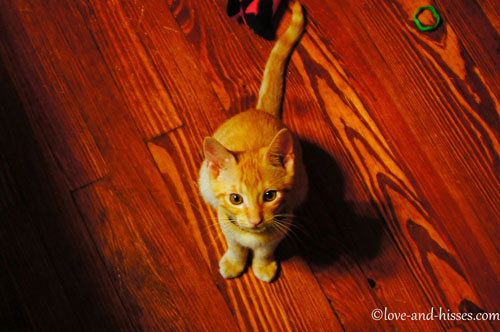 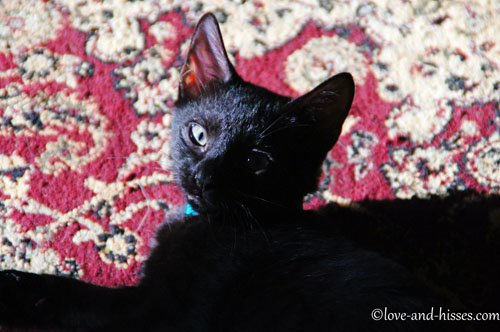 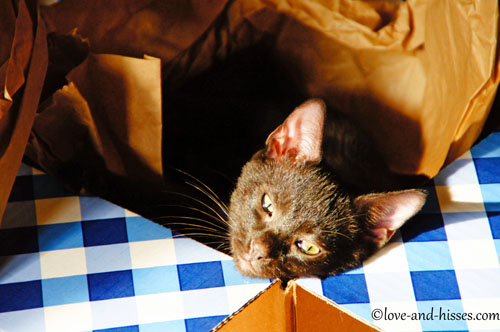 Wellington, too. That box o’ paper is apparently QUITE comfy. 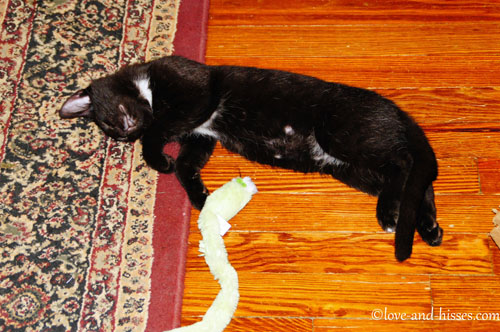 Dingwall Scotty was playing with that long-tailed mouse and then he was OUT. 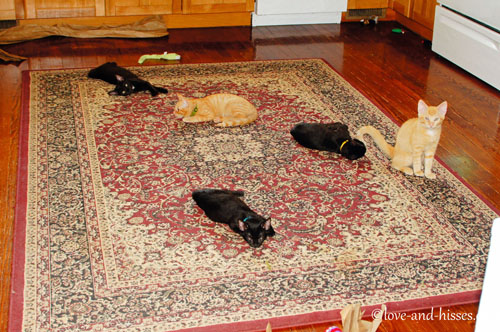 Sleepytime for the baby ‘Maters. 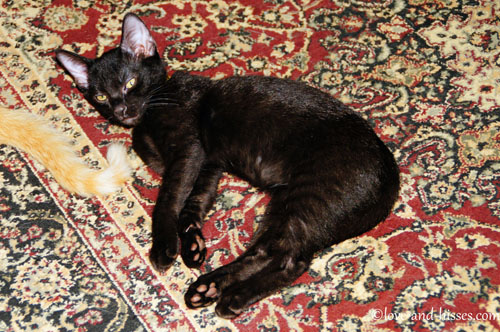 “I wasn’t planning to bite his tail. Nope, not me!” 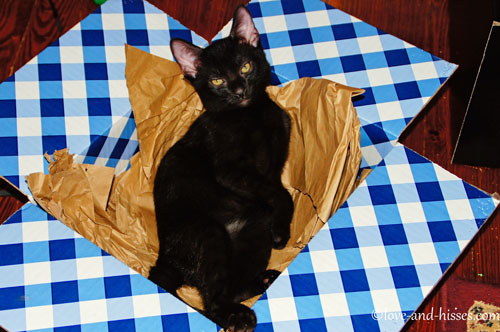 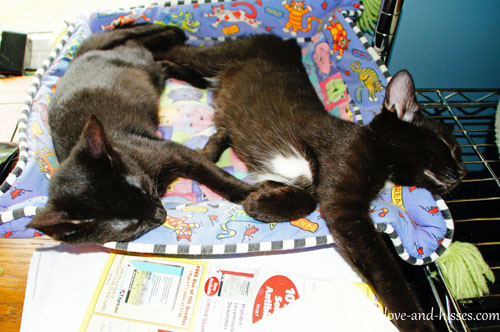 And videos. The first, Brandywine disciplining her bratty little boys.

And in the second, the ‘Mater boys are STAR.VING. Jake makes a brief appearance. It was totally NOT snack time (at least, not in the first segment), but they were dying of starvation, clearly.

(Fingers crossed that there are a MILLION adoptions this week and Razzie AND all the ‘Mater boys go home!) 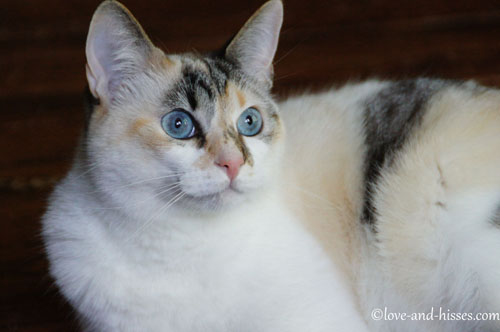