In case you hadn’t noticed, we’ve got a new design here on the blog (if you read this via a reader, you won’t notice a thing, I imagine!). It pretty much looks like it’s going to, though I’ve got a bit more fiddling to do.

The banners at the top are set to come up randomly. I know the pictures are a bit small, but the width and height of the banner are constrained by the design. Those banners were put together pretty quickly; hopefully I’ll get the hang of how to fit as many pictures in the banner so they won’t be TOO small (the banners were made using PicMonkey, by the way. I LOVE PicMonkey!). Like I said, they’re set to come up randomly, and if you want to see all of them, go here (the link to that page is also at the top of the sidebar). It’s my plan to eventually have a banner for each litter; once that’s done, I’ll likely go back through and make extra banners as the mood strikes me (yes, Stompers DOES need his own banner!)

So, there we go. That wasn’t too painful, was it? The main thing I need to do is go add links to other blogs in the sidebar, make some more banners, and then I’ll consider the job done. Until I feel like changing something, that is.

Let me know if anything doesn’t work for you! 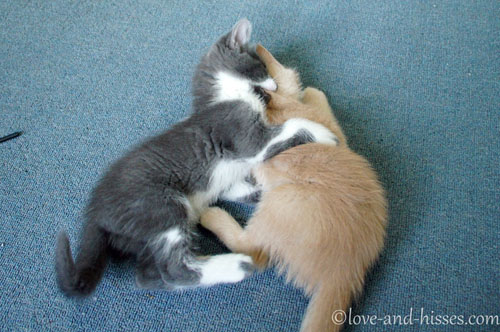 Puff would like Scorch to know just WHO the boss is around these parts. 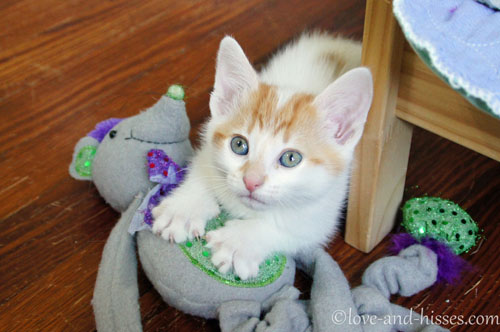 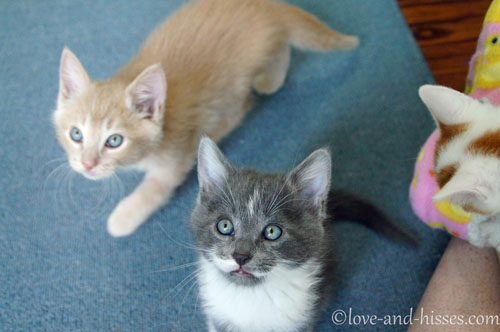 I imagine there was a feather teaser waving around wildly up there somewhere. 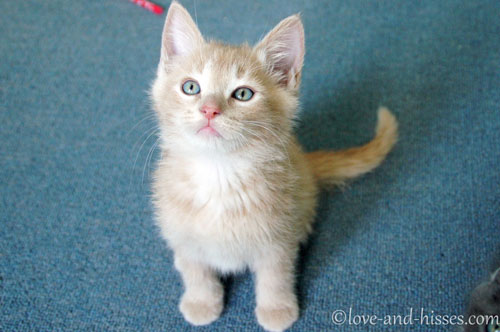 Oh, I love that Scorch and his serious little face. 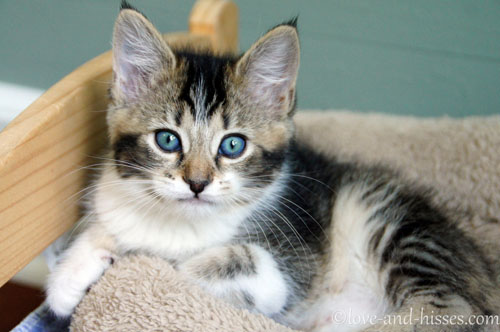 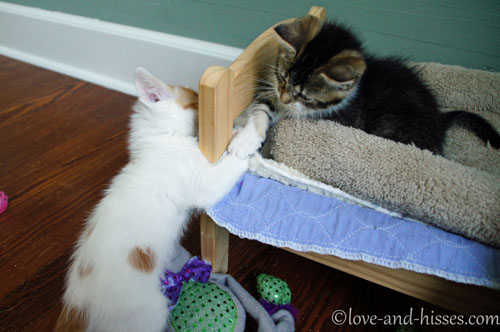 Kittens are always fighting through the bars of the bed. I’m not sure what the attraction is, but it’s a popular one. 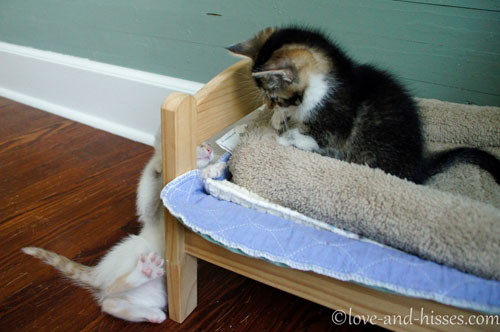 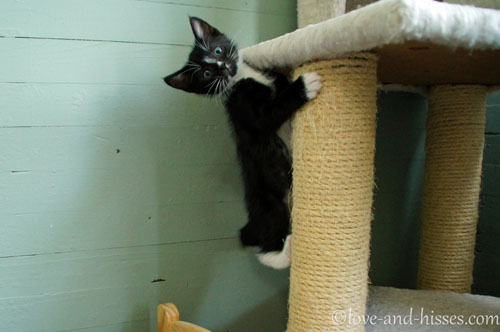 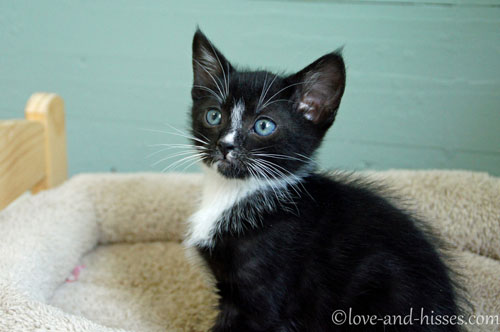 Oh, Norbie. I kiss you 37 times a day, and you look like you need MORE kissing. 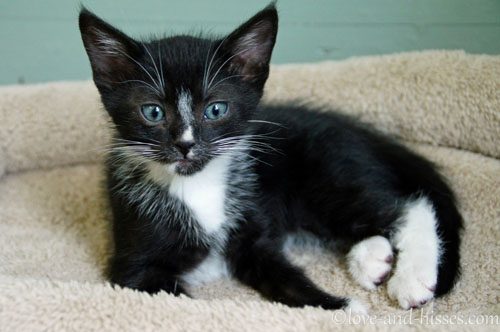 “You keep your kisses to yourself, lady. At least when my brudders are around. I don’t need them teasing me any more than they already do!”

To those who asked, Jake is just fine after Khaleesi attacked him. I wasn’t actually there when it happened, but I imagine that Jake tried to play with or headbutt one of the Dragons, the Dragon hissed, and Khaleesi’s protective instincts took over. When things were calm, we tried putting the barrier up at the end of the hall so that the kittens couldn’t get out, figuring that if her kittens weren’t out then Khaleesi wouldn’t feel the need to protect them. But she has apparently decided that Jake is The Enemy, and went after him again. Poor Jake. And for that matter, poor Khaleesi – she was just trying to protect her babies.

She’ll be going to Petsmart tomorrow. Hopefully she’ll be adopted quickly! She’s such a sweet girl that I don’t know how anyone could resist her. 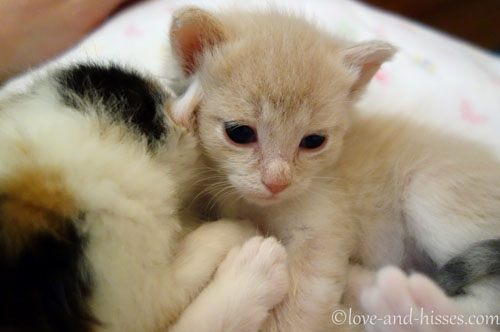 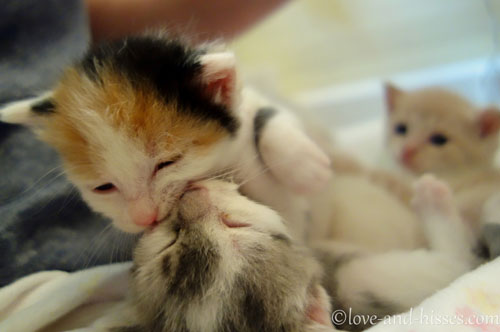 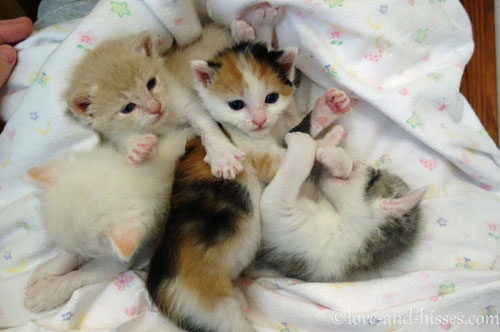 Brandon has his bitey moments also. Well, they all do. 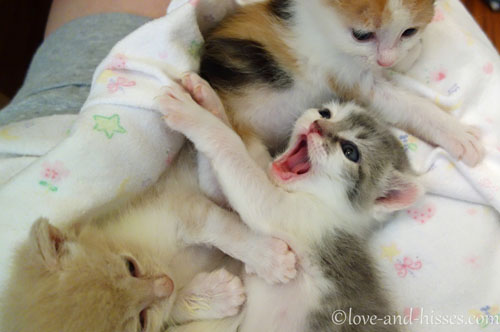 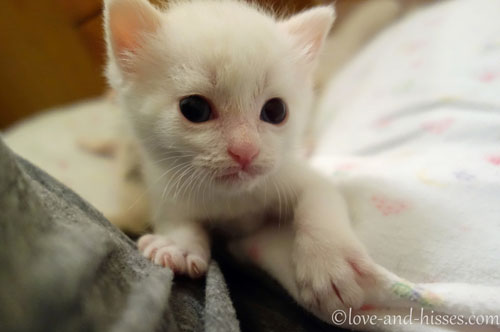 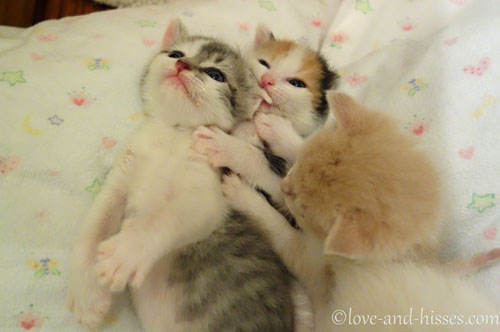 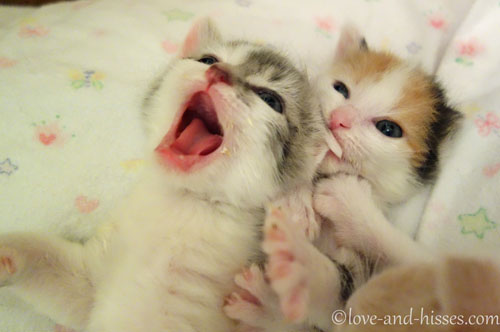 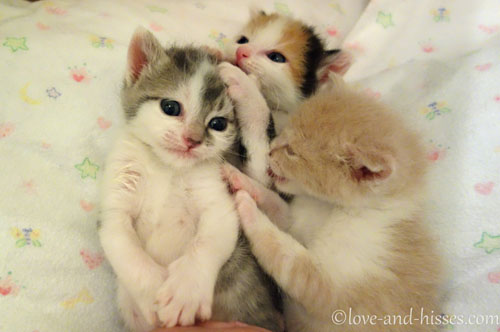 The neatly folded paws are killing me dead. 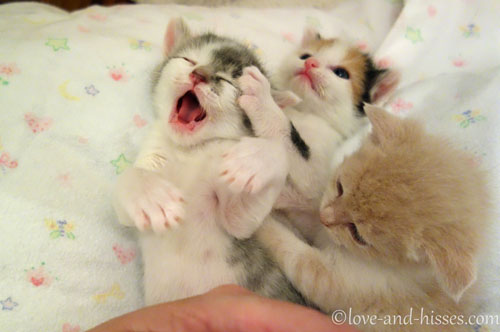 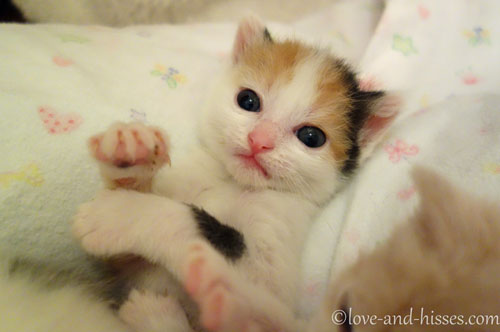 Brandon and Jon Snow have both hit the one-pound mark (weight chart here). Arya and Hodor are about three ounces smaller. They’re all eating well and using the litter box (mostly). I tried introducing them to canned food mixed with formula, but Arya was the only one who showed any interest, and she mostly wanted to swim around in the plate of food.

They’re still living in the bathtub in the downstairs bathroom. Every time I think I should move them up to the small foster room, I walk in to find that someone used the litter box and someone else swam through it, requiring a scrubdown of the tub and at least a couple of the kittens. It’s so handy to have the sink right there (and the tub is SO easy to clean!) that I’ve been putting it off. I think I’m ready to make the move, though. I want to let them have room to explore after I’ve fed them, and the bathroom is so cluttered with taking-care-of-kittens supplies that they don’t have much room to move around. They’ll be confined to a cage when I’m not in there, so any mess they make SHOULD be confined. So I’m going to give it a try today and see how it goes, is what I’m saying. Wish me luck! 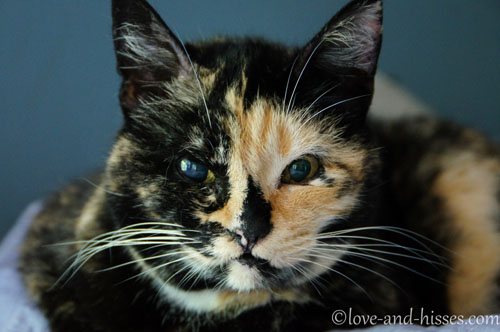 Oh, Miz Poo, you are the sweetest girl on earth. You really are! (And she knows it.)