Saw this over at Cute Overload..I’m sure Robyn could grow one of these cat trees.. 🙂

Indeed I could! Isn’t that adorable?

Hi Robyn, I was wondering what the brand name of the collars that you use to keep the permanent residents in the yard is? My parents have an indoor kitty who would dearly love to be an outdoor kitty, and she causes them so much stress when she escapes!

We use this PetSafe fence, and the collars that go with it.

There’s a wire fence around the back yard, so Fred ran the electric fence wire around the bottom and then around the top as well. It works really well to keep the cats in the back yard – on the rare occasion that one of the cats who wears a collar escapes (Kara or Tommy – the other cats don’t try to escape the back yard, luckily), it’s because the collar battery needs to be replaced. My only gripe is that the fence only comes with one collar, so we had to buy extras.

Okay, my other gripe is that the collars are ugly and ruin my pictures, but I’ve learned to live with that.

OK, question for you and the gang. Mostly a curiosity thing than anything. We have had quite a few cats in our life (and never encountered this and all were rescue/shelter cats and kittens) but I have a new brother /sister pair of black kittens we got from a rescue lady. Mother was semi-feral, kittens got over it quick. The boy is a real snugglebug but he LOVES to get in my face and smell around my mouth, eyes and sticks his little nose in my nostrils and leaves it there for a few seconds all while “patting” my face with his paws. He will do this for about 15 minutes rotating around my face then snuggles in my arms to sleep. Is he just weird or do we have others that have had this happen?

I’m not sure what the reasoning is, but I’ve definitely had kittens who do this. In fact, Jon Snow and Brandon are extremely fond of trying to stuff their heads up my nostrils or in my mouth. I wonder if it’s a comfort thing? Jon Snow and Brandon tend to do it after they’ve eaten and are getting sleepy.

This isn’t quite the same thing, but the question made me immediately think of when Miz Poo was a baby. I started meowing at her one day, and she got super excited, ran over, climbed up into my lap, got right in my face, and tried to stuff her entire head in my mouth. I thought I was going to pass out, I was laughing so hard.

I must have one of those doors to another dimension too. Snowball climbs up on my curio cabinet, faces the corner, and howls. Hey. Maybe he found a way to communicate with some kittens in Alabama!

When we lived in our previous house, the cats used to LOVE to go into a corner cabinet in the kitchen, and hang out way in the back. We used to say they were going to Narnia. If we couldn’t find one of the cats, we’d say “Did you check Narnia?”

I’ve been meaning to ask you if you’d ever had a cat with Eosinophilic Granuloma Complex – my cat was diagnosed with it two summers ago. He’s been getting steroid shots several times a year, but the times between when he needs them has been getting increasingly smaller. I know it’s not good for him to have too many steroid shots…and it’s also really difficult for me to get him to the vet every two months. He looks absolutely horrible a lot of the time (swollen foot pads, big swollen bottom lip, bloody scratches all around his ears), but he seems to be in good spirits. I’m going to ask my vet about Atopica – we really need to find something to help my little guy! If you find anything else that helps Tommy–I’d love to hear about it!

We tried chlorpheniramine, and we also tried adding essential oils to his diet at the vet’s suggestion. Neither of those helped, though, which led the vet to suggest Atopica. He said that the most reported side effect with Atopica is vomiting, but that when it works for a particular cat, it’s a life-changer. Luckily, it doesn’t cause Tommy to vomit, and it seems to have made a big difference.

When we started him on the Atopica, we also started him on a course of steroids at the same time. Then after a month, we weaned him off of the steroids, and gave him just Atopica every day. He’s now been on the Atopica for a month, so as of this week Fred is weaning him back to (I think) every other day. If that goes well, he’ll try every third day. The idea is to figure out the lowest dose we can give him that will still work. He doesn’t like the taste of the medicine – it makes him drool – so if we only had to give it to him a couple of times a week, that would be awesome!

Corbie the Gorgeous! Love the brown tabbies with caramel coloring (I have a polydactyl one of my own). How is he doing, back-end wise? I remember there was a problem, then some medication, then maybe a cessation of medication? Or maybe I have it wrong re: medication… At any rate, I hope he’s well, but he’s lovely no matter what!

The muscles in his back end are still less developed than the muscles in the rest of his body, but he gets around just fine. One of the vets we’ve been to suggested that it could be caused by the fact that his mother was FIV positive (if you weren’t reading at that time, we managed to trap her, and she was very sick and needed to be euthanized. Corbie and his brothers – Bolitar (Buster), Reacher, and Rhyme – initially tested FIV positive, but subsequently tested negative. Corbie’s been tested again since then, and he’s still testing negative.) We tried L-Carnitine and Taurine supplements, as well as B12, but none of them made any kind of a difference. After a while of that, he was becoming so paranoid that any time we so much as glanced in his direction, he ran and hid, so we discontinued the supplements. He can’t jump, but he can climb up onto his favorite spot – the couch – by using his claws. He’s gotten no better and no worse, and he’s a pretty happy boy, so I think he’s doing well. 🙂

OK I had to interrupt reading your post to ask a question. (I promise I will get back to the kitties in a moment when I’m done.) You talked about Tommy’s skin problems, and Atopica – which I’ve never heard of. Thank you for the link!

We have a problem with my Tonkinese, Frank. He’s got skin allergies, affecting mostly his hind legs and his arms. He scratches/gnaws at them a lot. Vet gave him a steroid shot and said that might clear it up. It returned so now he’s on 2mg of Chlorpheniramine (1/2 tablet) 2x a day. I can pill him fine, but the half pill scratches his throat, I think, and he coughs after I give it to him a bit.

Tried grinding it up and hiding it in a treat. No go. He won’t eat the treat, although his brother sure will! Do you have any suggestions? Right now we’re trying to pill him and immediately give him wet food as a treat in hopes that softens any scratching the pill does going down.

Any suggestions or thoughts from you would be great. You’ve had hundreds of cats, I’ve only had 3 and this is the first one with skin allergies. He’s such a sweetie pie, I hate that giving him these pills makes him uncomfortable. Thanks.

Obligatory photo of Ray (the grey one) and Frank (with points) looking like I’ve caught them engaged in something a little x-rated. 🙂 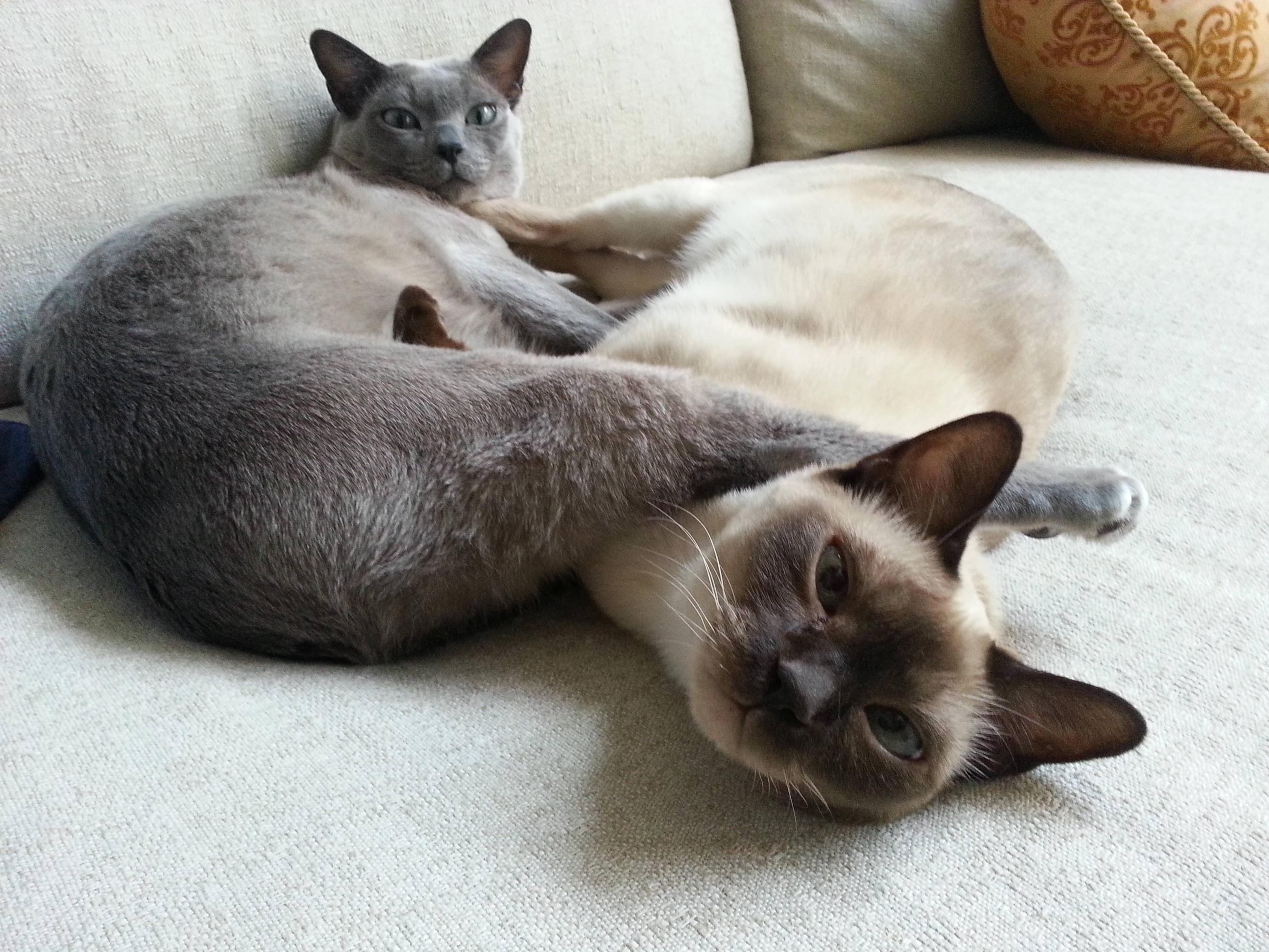 Several people had suggestions (a squirt of water being one, and a compounding pharmacy being another), but I’m mostly sharing this so that y’all will see that great picture of Frank and Ray. They look so GUILTY – and they are so gorgeous!!!

I don’t know if you saw the mention on facebook about Big Cat Rescue in Florida. They have a new bobcat kitten named: Khaleesi

What a CUTIE – and her voice cracks me up!

With all the turkey comments, I can’t help but think of this.

I was watching that clip at my computer, and when Gir said “I was the turkey all along!”, Scorch (who was sleeping in the cat bed next to my monitor) jumped up and ran out of the room like the hounds of Hell were after him!

So you call your kitties “turkey” too, huh? My husband calls any small creature (the guinea pig I had in grad school [Zippy, rest his tiny soul], kittens we’ve fostered, etc.) “turkey” or, more frequently, “turkey leg.” I can only imagine it’s because they are similar in size to those giant turkey legs you can get at RenFests and other fairs.

Oh – and we think it is your fault that mom now calls the tiny kittens “monkeys”.

The kittens in this house have many, many nicknames. When they’re being silly or goofy, they’re turkeys. When they’re running around like crazy things, they’re monkeys. If they’re being big babies, they’re (of course) BAYbeeeeeeeees. I call them all “Buddy” and “Bud” and “Bubba” (even the girls), and of course there’s the ever-popular “Sister” and “Sissy” for the girls and “Bruvver” and “Brudder” for the boys.

Fred told me the other day that he’s pretty sure Stefan thinks his name is “Buddy.” 🙂

And, is it just a trick of photography/the light, or does that Jon Snow have some great black eyeliner on?

I have looked him over carefully, and I think it’s just the way his inner eyelid meets his iris that makes it look like he’s got eyeliner on. That, or the light.

totally unrelated to this post but have you seen this?

Shih Tzu rescues kitten from ravine (and then adopts her).

I had not seen that! That is SO SWEET!!!

Also, i was just on You Tube looking at my favorites, and the Aslan denied video is not working. I just love that one so much, I can even quote you on it. “That’s right, be casual about it – awwww denied!!” 😀

I love that video so much! I don’t know what was going on with YouTube (I couldn’t get to the video either), but it’s back up now. I love Scorch’s super pink nose in this picture. Scorch and his reflection reflect upon how much they like the sun. Ember is an excellent fly catcher. Unfortunately she lets ’em go once she’s caught them. I guess she believes in catch and release. “What, lady? We is having an important MEETING. You go ‘way.” Such a smug boy. Scorch has decided that he likes Sugarbutt’s ham-mick. Sugarbutt does not approve of this. “STOP licking your LIPS, you are REALLY bugging me. And also, GET YOUR BIG MONKEY FOOT OFF MY FOREHEAD!” Arya likes to color coordinate her toys to her outfit.