As her eating skills have improved, Arya’s after-eating food beard has been reduced to more of a food goatee. Hodor has to fold his ears out of the way so he doesn’t get food on them. Jon Snow looks like he’s about to mess me up – but he’s actually concentrating really hard at getting those last bits of food from his face to his mouth. Brandon’s eyes are pretty much the same color as his fur – at least for the moment. Jon Snow gets this look on his face after I’ve kissed him several times in a row. He looks like he’s savoring it. Video! The whole thing is cute, but the best part is at the beginning, when Arya flails around and can’t quite turn over because of her big ol’ belly. Dragons sure do love that sunlight. Slap fight on the cat tree. I love that, way in the background, on the right, you can see Miz Poo laying on the bed. Even sound asleep, Puff knows to aim those Ears of Annoyance at me. Ember has got some SERIOUS ears.

Ruth, Ember, Puff, and Norbert are home from their spaying and neutering, and doing fine. They started racing around as soon as they got home, and pretty much did that all day. They wanted a lot of attention and reassurance, which was just SO HARD, as I’m sure you can imagine.

Scorch seems to be on the mend. I have no idea what was wrong with him. We realized on Saturday that he was having pretty bad diarrhea, and it just got worse as the weekend went on, no matter what I tried. He was still playing, even though he didn’t feel well, so I wasn’t too worried until Monday morning when he wouldn’t play, wouldn’t eat, and didn’t want to do anything but sit in a hunched-over position. He lost 3 1/2 ounces from Saturday to Monday which doesn’t sound like much, but he only weighed just under three pounds to start with. I had to wait a little while for him to use the litter box, but as soon as he did I scooped it into an old container and took it and him up to the vet. The fecal didn’t show anything wrong, so we talked about what I’d been trying (Forti-Flora, slippery elm syrup, pumpkin, pectin, Pedialyte) and what to try next (a low dose of steroids, keep on with what I’d been doing). Tuesday he didn’t seem any better and he vomited a couple of times. He refused to eat (though anything that did go in his mouth seemed to come out his other end with not much time in between), and that evening I talked to the vet. She suggested we start him on Metronidazole, which I did immediately.

I don’t know if it was the Metronidazole, the other stuff I’d been trying, a night spent cuddling in bed with me, or a combination of all three, but Wednesday morning when I got up and headed into the kitchen to give the permanent residents their morning snack, he ran in with me and howled until I gave him something to eat. He continued to eat throughout the day yesterday, and I even saw him playing a couple of times. He was definitely glad to see his siblings back, and spent a lot of time snuggling with them. The diarrhea is getting better, he’s clearly feeling better, HALLELUJAH!

Depending on how he does the rest of the week, he may go for his neuter next week. The good thing about them at this age is that when they bounce back, they tend to do it pretty quickly.

So, that’s the story with Scorch. He was not feeling well, and now he is! Luckily, none of the other Dragons seem to be feeling poorly, so we won’t have to go through it another 4 times.

(The best part of his illness, in my opinion, is that with his siblings not here, Scorch decided to take solace with Uncle Suggie, who didn’t have the heart to put the smack down on a poor wee ill kitten. Well, until Scorch started snuffling around in Suggie’s belly fur, that is. Then there was a hiss, a smack in the general direction that didn’t make contact, and a flounce. Suggie’s an excellent flouncer!) 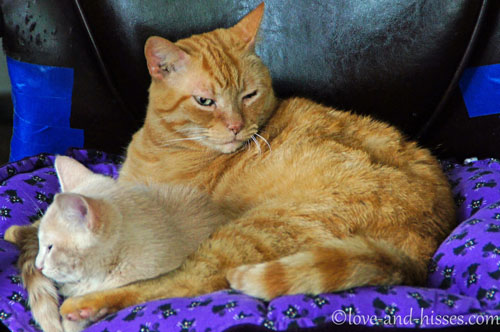 If you waded through all that text up there, here’s a video for you! Norbie and Ruth are awfully cute, but the best part of the video is the obnoxious noises Fred was making in the background because he didn’t know I was making a video. Sun baths are even better.