Los Gatitos are now at the adoption center. I haven’t heard that any of them were adopted, so I’m assuming they were not. That surprises me, honestly, because I was sure they’d be snapped up in no time flat.

However, I DID get to witness Garrity and Franco being adopted, FINALLY. Friday marked three weeks since I took the Rescuees to the adoption center, and while Sheila was adopted fairly quickly, the boys just sat there, unadopted. Every time I went into Petsmart the four of them were either playing or snuggled up to each other, and they seemed happy enough, so I wasn’t too worried about them.

Garrity and Franco were adopted by two girls, roommates (each girl adopted one kitten), so they’ll have each other to play and hang out with. That leaves Lieu and Gavin, and I hope it won’t be long for them.

When I put Los Gatitos in their cage, Pancho was all “Hey, look! TOYS!” and Evita and Hermano went into the litter box to hide.

I HATE IT when they hide in their litter box!

They’ll adjust, they almost always do. I’m not surprised that they were scared at first, but I’m glad that they have each other for comfort. 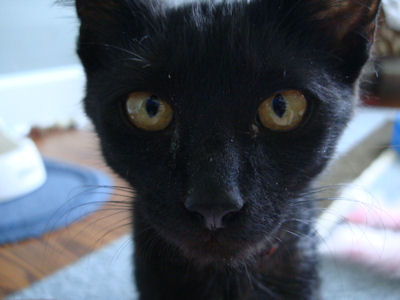 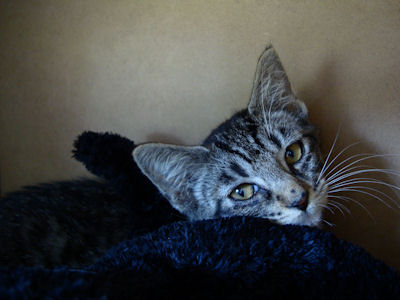 Melodie. She’s in the condo on the cat tree, snuggled up to her stuffed cat “baby.”

Moxie is a lover. She’s a people cat. She wants you to pet her. She wants you to snuggle her. If you stop petting her, she lets you KNOW that things have gone amiss and there is no petting going on, please resume the petting.

Melodie is a skittish, sweet girl. She’s a cat’s cat. She’s been hiding out in the condo on the cat tree a lot. I go up and hang out in the room, pet Moxie and Martin, and talk to Melodie. She usually starts out in the condo, then comes out to see what’s going on. A few times she’s come down off the tree to walk around the room. 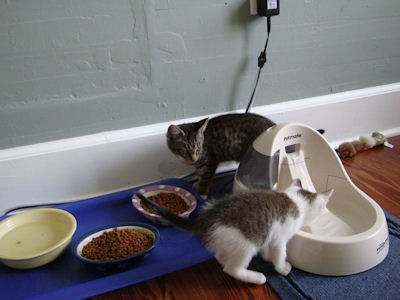 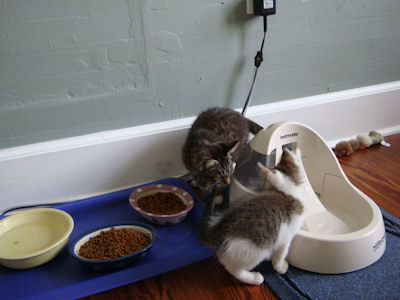 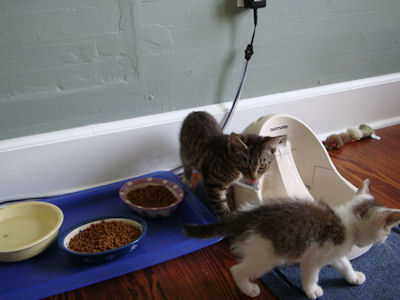 She seems to like Martin. And for his part, when we walked into the kitten room and let Melodie and Moxie out of the carrier Friday night, you should have SEEN Martin’s face. Oh, did he think it was Christmas! He said “You brought me friends to play with!”

Moxie, for the most part, thinks he’s annoying – but she’ll play with him when the mood strikes.

Melodie definitely likes Martin – and when I walked into the room yesterday afternoon, who came out of the condo? 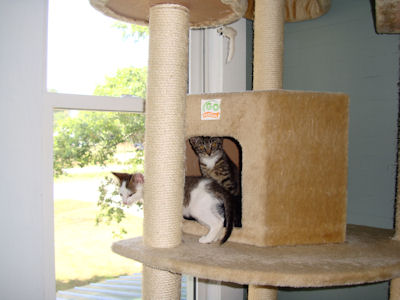 Martin! Have you been SNUGGLING with Melodie??

So far, things are going well. I’m letting Melodie go at her own pace. I always greet her when I come into the room, pet her (and she starts purring immediately, so underneath the skittishness she’s a lover, too.) I know she’ll come to me asking to be petted when she’s ready. We’ve already had a few “conversations” where she meows at me and I meow back. I don’t know what I’m saying to her, but it gets her to come out of her cave, so it can’t be bad. I hope! 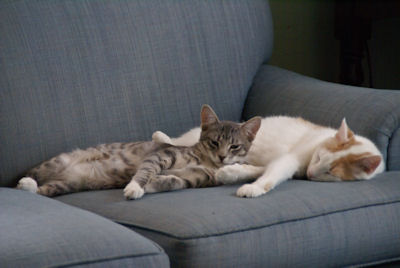 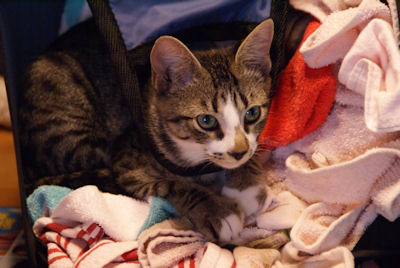 So, I might have put a little basket of laundry (dish towels and cleaning rags) on the table, and Bolitar might have found it and turned it onto its side and climbed in to hang out on the clean laundry. Annnnd three days later, it might still be there. What? You don’t leave your clean laundry on the table so the cats can sleep on it? It’s a good excuse not to fold laundry! (Which will need to be washed again, I suppose. At least the stuff on the top of the pile.) 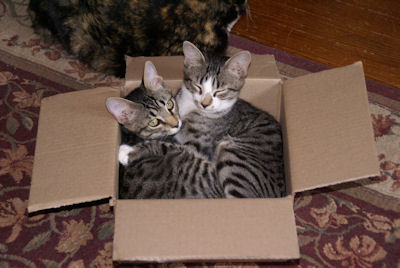 One day I should walk around the house and take pictures of all the boxes I have sitting on the floor just in case the cats want to sleep in them. In the kitchen alone are at least four boxes. When WILL House Beautiful call to ask if they can feature my fabulous home, do you suppose? 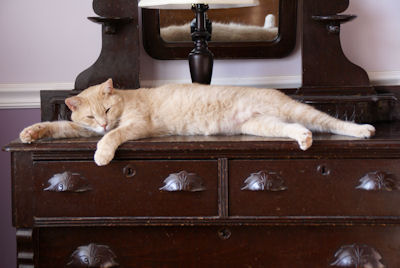 It’s gotten consistently hot enough outside that even Newt is spending his days inside trying to stay cool. Now THAT’s hot.