So, the news segment went pretty well – I was SO nervous, but Bev (from the North Alabama Spay Neuter Clinic) helped to put me at ease. It went quickly and Razzie and Logie were adorable. I ended up bringing those two because they were the two who were most alert when I showed up at Petsmart (Darwin and Newbery were both snoozing and not inclined to get up). I put pink harnesses on them both, put them in the carrier, and off we went.

The 4:00 news on WAAY shoots at the Monaco Theater at Bridge Street in Huntsville (a new, VERY nice shopping complex), and there were lots of people milling around. I met up with Bev, and we talked (about cats, of course), and before I knew it, it was time to be on the news! Razzie was particularly cute, and Logie was cute too, though she mostly didn’t want anything to do with whatever was going on.

You can see the segment here, and it’s embedded below.

Edited to add: It’s no longer available. Sorry you missed the magic.

My favorite parts, the ones where I have mocked myself mercilessly since Friday afternoon, are the one where I started to say that Challenger’s House is a limited admission shelter, said “edition” instead of “admission” and then had to stumble for what felt like a year before the word “admission” came wandering into my brain. Also, I clearly could not remember Razzie’s name, which is TERRIBLE, but in my defense we always called her “Stumpy” at home. And lastly, when the reporter said that adopting a cat is not to be taken lightly, the raised-eyebrow, nod-nod-nod response from me makes me laugh out loud. I was clearly all “THAT IS RIGHT, MEREDITH, YOU ARE CORRECT! HA HA!”

Meredith Woods was so adorable that I wanted to stick her in my pocket and bring her home. (Also, we had no idea that that graphic was up so long, so y’all missed the utterly adorable close-up of Razzie licking Bev. SO CUTE.)

And ironically, Darwin was the one who was adopted on Saturday! I sure hope the other three are adopted soon. Fingers crossed! 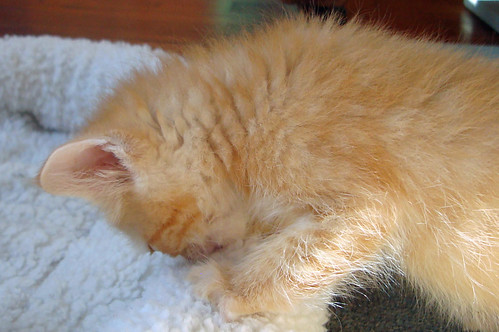 Stompers, “nursing” on the cat bed. When he and Kennebec, Agata, and Fianna get going, it’s quite the sight to see. 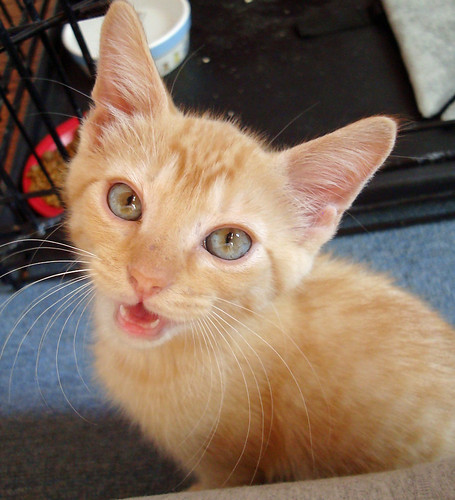 “Why my eyes gotta change? I wanted them to stay blue!” 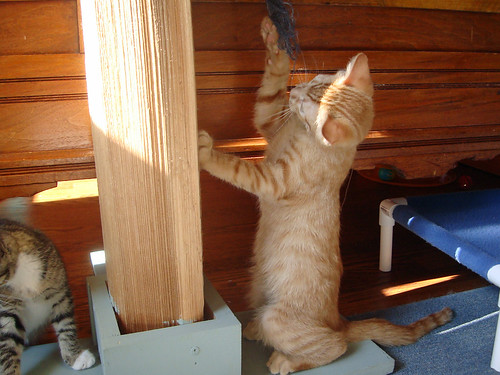 Norland loves that frayed cord hanging down from the top of the cedar scratching post. 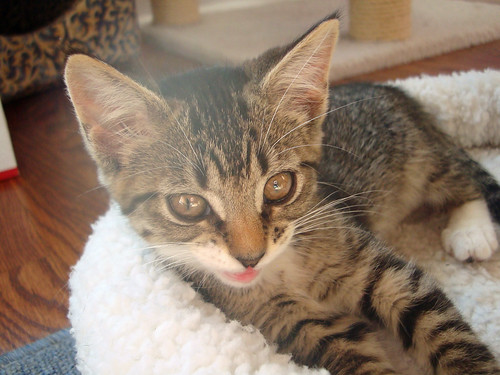 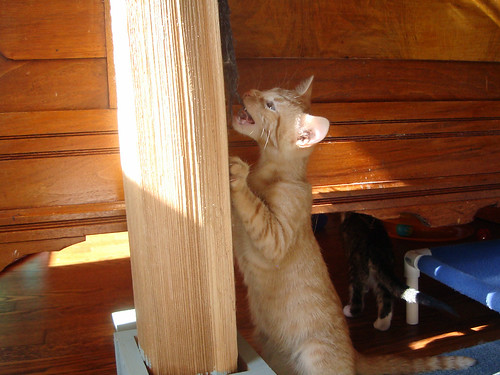 Tell me that grumpy boy doesn’t totally have a monkey face there. 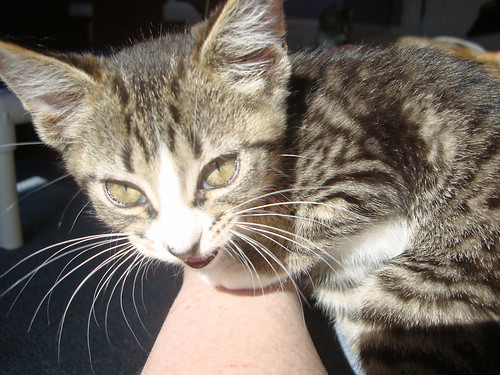 Fianna’s tellin’ me how it is. 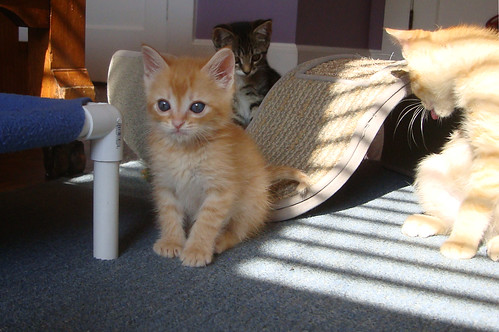 Stompers seems to be worried about something. 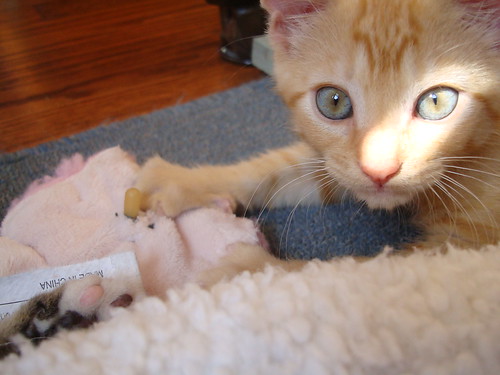 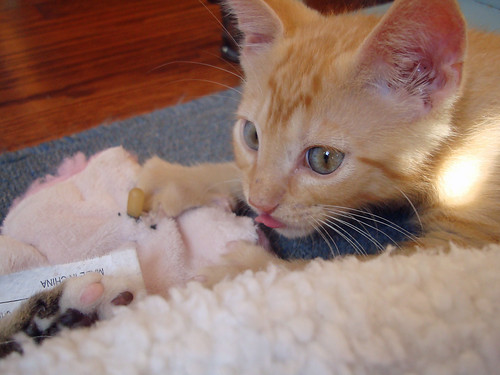 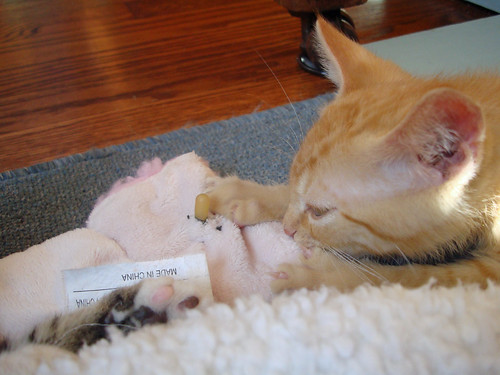 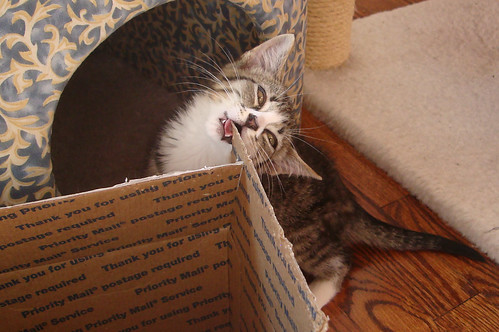 Fianna gets in her daily cardboard requirement. 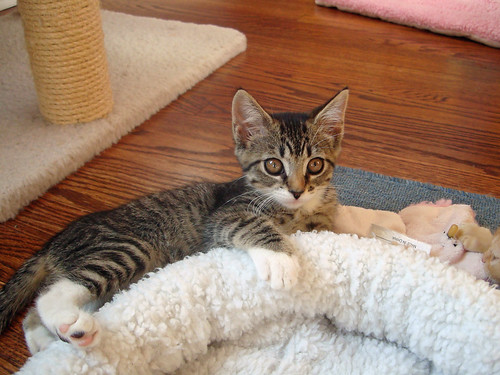 “Just hanging out. Not gonna suck on that cat bed, nope.” 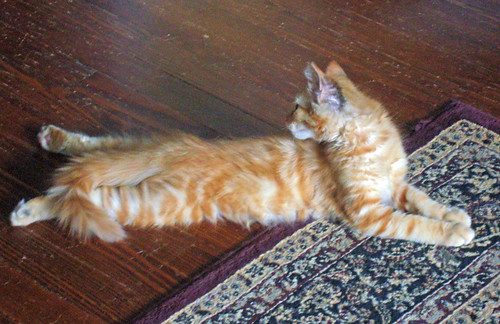 Pardon the graininess of the picture. Floofypants loves to lay flat on his stomach like this, and it always cracks me up. 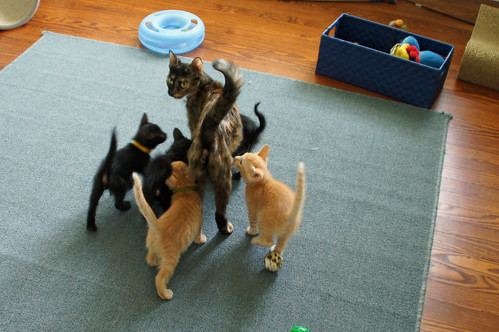 Poor Brandywine. These kittens follow her around, howling, all the time. It’s like she’s being followed by her own crowd of stalkers. 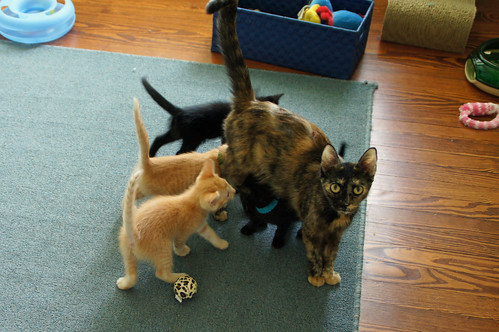 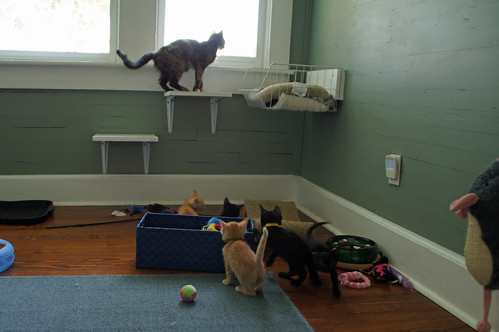 She takes a short break, but then comes back down. 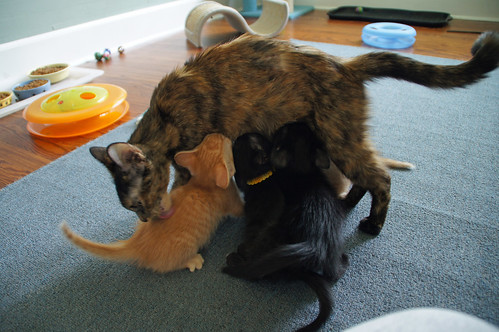 If she stops for a moment, the little monsters latch right on. 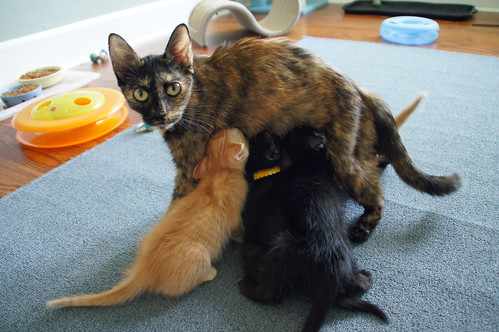 “Seriously. Do you SEE this?” 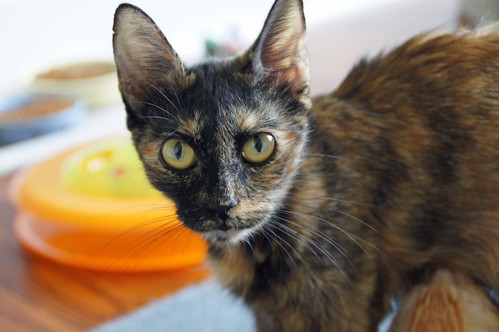 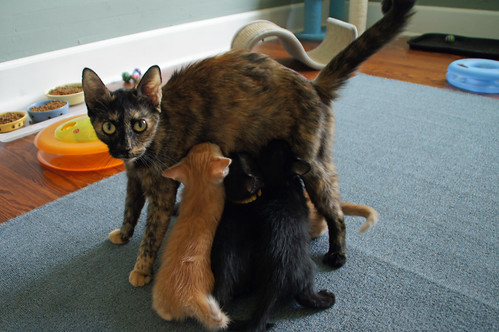 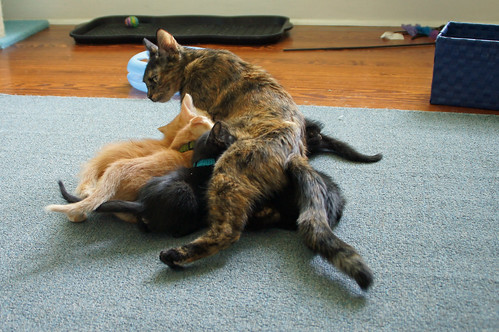 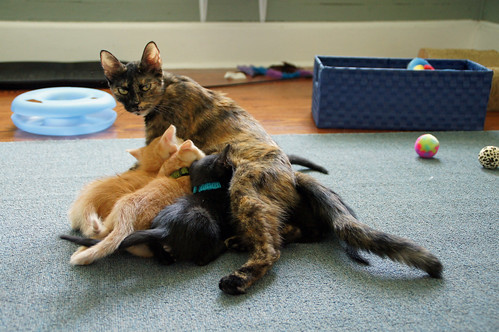 The look she’s giving me is cracking me up. 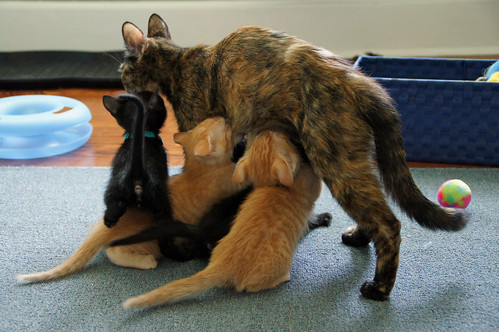 We started giving Brandywine a break from the brats this weekend. Saturday, we put her in Fred’s room with a litter box and food and water for the morning. That went well, so Sunday we moved her over around 9, and left her ’til 5. That went well, too, so it’s going to be a daily thing. She’ll hang out in Fred’s room during the day, then back to the foster room at night.

One thing I’ve noticed is that when she’s not in the foster room with the babies, they are a WHOLE lot less shrieky. They climb into my lap and let me pet and kiss them, then they run off to play with each other and circle back around for more petting.

So, in short, it’s going well. Brandywine is a sweet girl who, when she doesn’t have babies hanging all over her and screaming, loves to be petted and to give headbutts. She’d dearly love to be out in the house – she rushes the door every time we open it – but none of us are ready for that just yet, that’s for sure. 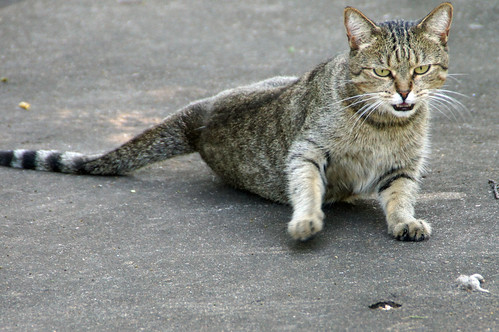