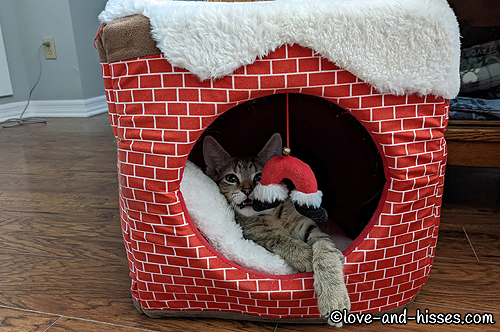 Clover found this little cube and made it his own. 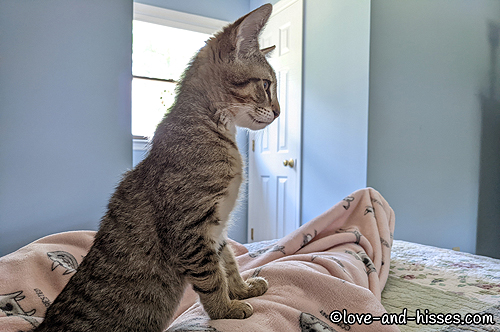 Watching Uncle Charlie walk through the room. Oh, how Clover has stars in his eyes when he sees Uncle Charlie (who mostly ignores him. Awww!)

Yeah, yeah, yeah. I know what you’re really here for. You want to meet the new fosters! Well, here they are. 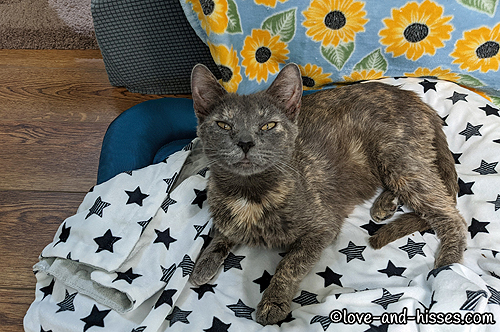 Dilute tortie mama Jocasta. She’s got some upper respiratory stuff going on, but she’s eating well and acting fine at least, so I’m not too worried. She’s a VERY sweet, laid-back girl. 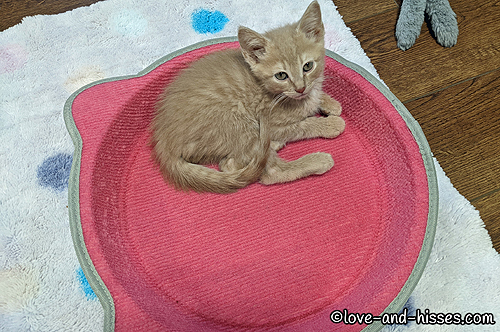 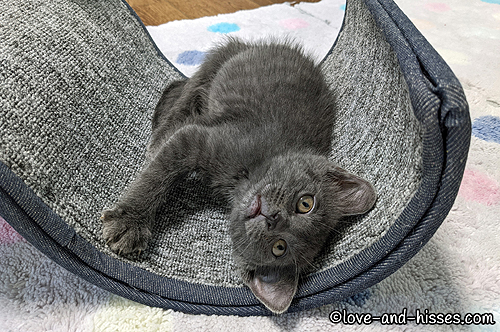 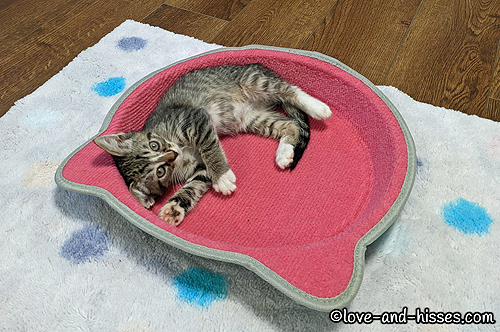 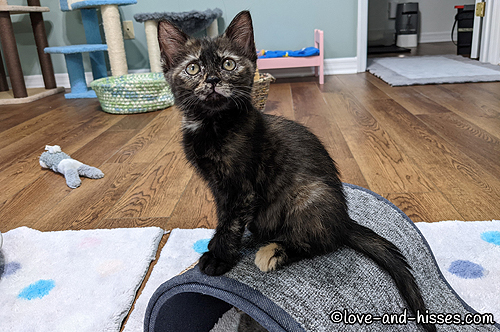 Tortie girl (check out that one orange foot!) Jenny. 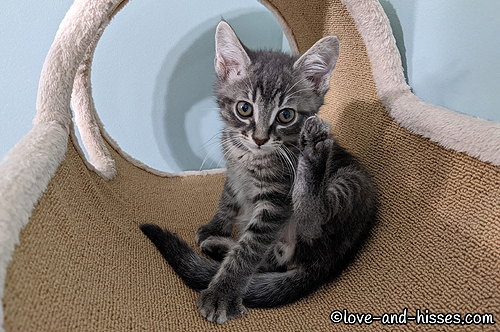 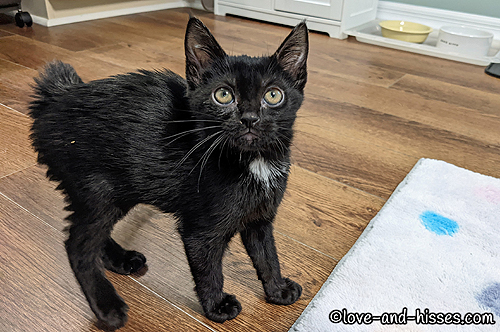 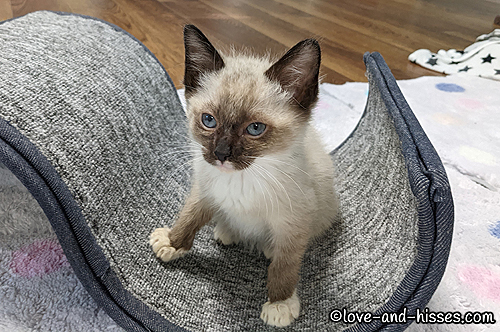 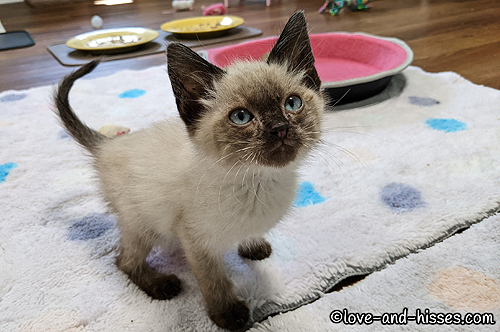 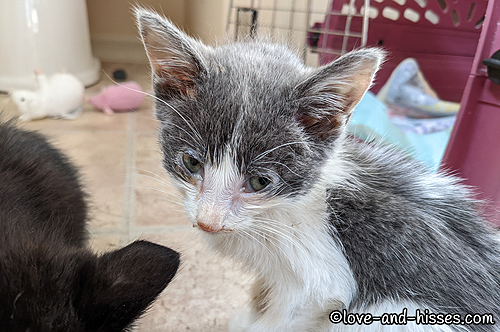 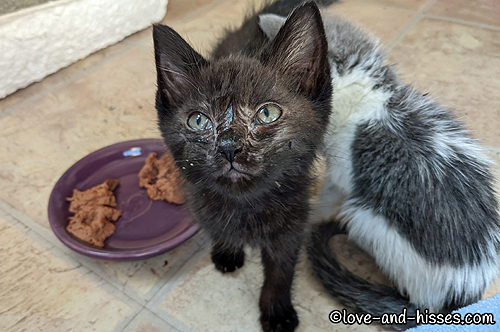 Jocasta was a stray that Forgotten Felines took. They were assured that she wasn’t pregnant and wasn’t a nursing mother, but upon intake, it was noticed that she definitely had milk. They went to the neighborhood thinking they were going to have to trap some kittens, but it turned out that someone in the neighborhood had the kittens and turned them over so they could be reunited with their mother.

Jamie, Lord John Grey, Marsali, Jenny and Angus are Jocasta’s kittens. Lizzie came from the same neighborhood, but belonged to another stray cat and so joined Jocasta and her kittens.

Brianna was left behind by a feral mother. The other three kittens – Ian, Fergus, and Roger – came from local animal control. I’m not sure what their story is, but it’s likely they were either turned in as strays, or were owner turn-ins.

Brianna is in rough shape – she’s got an upper respiratory infection. I’ve got her in the bathroom where I’m syringe feeding her regularly, and just trying to keep her hydrated. Roger is with her in the bathroom – he looks rough, but is actually doing really well and could go into the foster room. But I don’t want Brianna to be alone. Hopefully she’ll start feeling better in a few days, and they can both rejoin the rest of the fosters.

And yes, you counted right: we’ve got a total of 10 kittens and 1 mama. Jocasta’s about 2 years old. Her kittens are about 9 weeks old, and Brianna and Lizzie are about 5 days older. Ian, Fergus and Roger are about 7 1/2 weeks old. Her kittens are still nursing, but she’s not producing very much milk. The best news is that Jocasta has ALREADY been spayed (YAY), so we don’t have to worry about her going into heat.

They’re named after characters from Outlander. I haven’t read the books or seen the show (they’re on my list!), but Teresa helped with the names.

Before you tell me that there needs to be a Claire, there WAS a Claire, she’s just unrelated to any of these kittens or Jocasta. I was originally going to get Claire, her kitten Fraser, and… I think Ian, Fergus, Roger and Brianna, but then Fraser passed on and Claire was ready to be spayed and move on with her life, so she got herself adopted last week. Since Ian and the others were already named, we figured we’d keep on going with the name theme.

I’m going to call them the Outlander Clan, unless someone out there has a better suggestions! 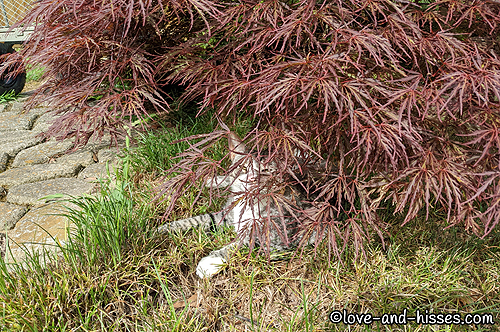 Charlie loves to hang out under the Lace-Leaf Maple in the back yard. 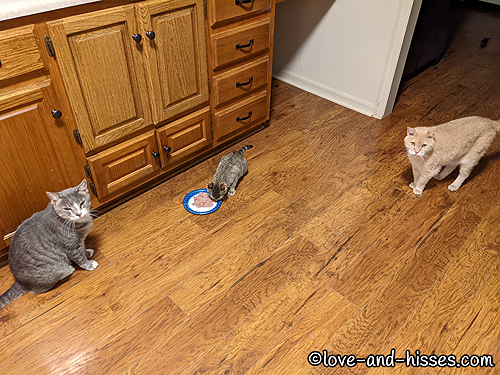 Clover’s all “Don’t mind if I do!”⁠
⁠
And permanent residents Archie (left) and Newt are pretty sure they know who’s to blame for this situation. 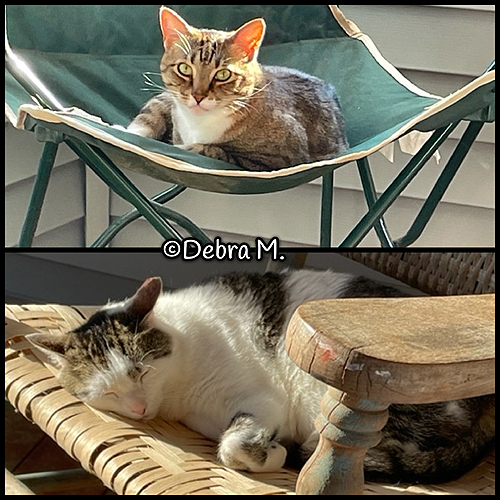 YouTube link
Last week we had work done on the inside of the house and we were staying in a hotel, so I didn’t post much. Here’s some random video of Clover being adorable throughout last week.

(Clover is adoption pending and will go home when his adopters are back in town early next week.) 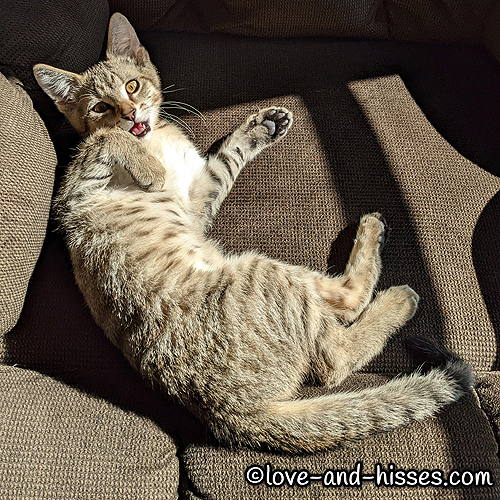 Clover’s all “Excuse you, lady. Can’t a boy enjoy some sunshine without you running over to take his picture all the time?” ⁠
⁠
NOPE. 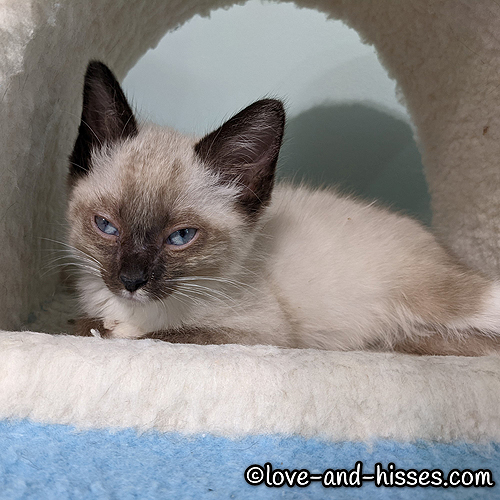