So yesterday, after I posted the link to the sweet FIV positive kitty who’s located in Madison, AL and looking for a home (see her here), Kelly posted and reminded me that if you’re too far North to adopt THAT FIV positive kitty, Kelly has JUST the kitty for you… That’s right, Mama Clarice STILL needs a home! She’s with Kelly in the Detroit, Michigan area, and Kelly’s willing to discuss transportation. Click on Mama C’s picture up there (or heck, click on this link right here if you can’t bring yourself to click on that sweet face) and read all about her!

Speaking of FIV positive kitties, I have a picture of our favorite FIV+ former foster! (Okay, okay, she’s our only FIV+ former foster, don’t be such a stickler for details). Remember Dandelion from last summer, who is now Pearl? Here she was last September when she was still with us: 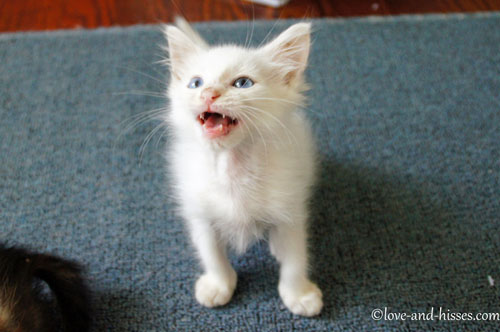 Well, she’s only gotten more beautiful since she went to her forever home. Here she is now: Also, just because it’s such a great picture, I’m reposting the picture from February of Pearl curled up with her brother Duke. Oh, that girl. She certainly landed in clover, didn’t she? 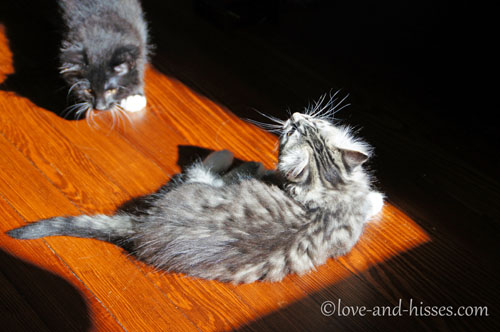 Kittens in the sun. After they have their snack first thing in the morning, I open the door so they can roam the house, and they all immediately go into Fred’s room and cavort in the sun. 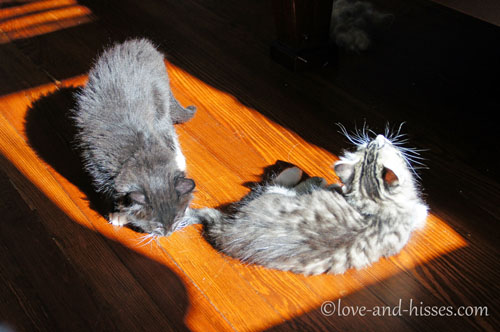 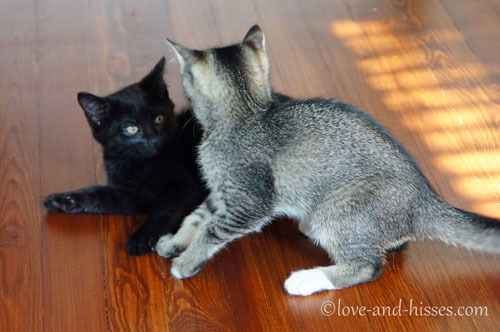 Jareth and Aslan are having a moment. 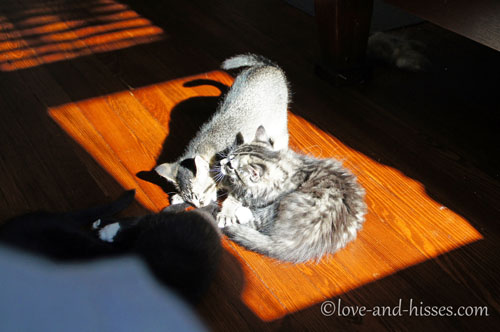 Leia says “You go ‘way. This is MY sunshine!” 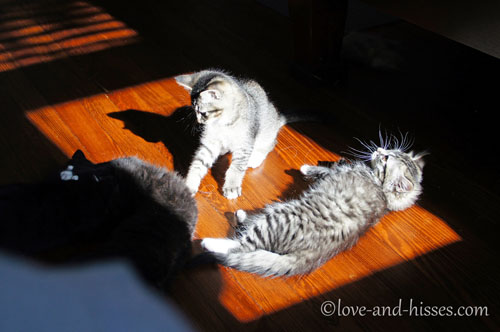 Leia, melting in the sun. 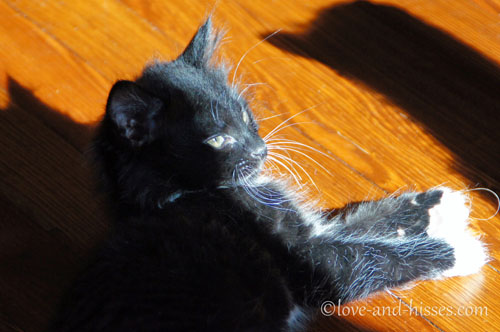 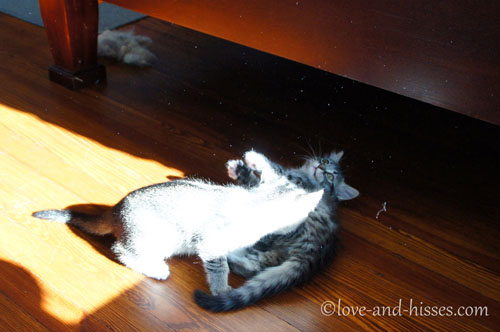 You can’t really see Aslan, because he’s bleached out by the sun, but he’s decided to bite Leia on the belly. Leia’s so dopey from the sun that she can’t do anything but smile at the ceiling. 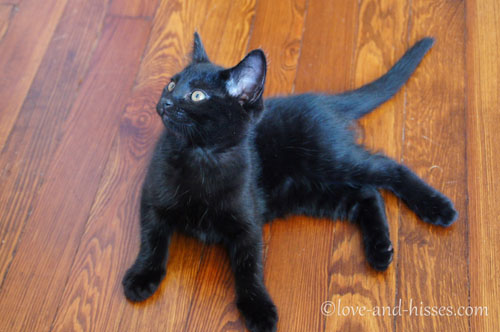 Jareth is such a pretty boy. 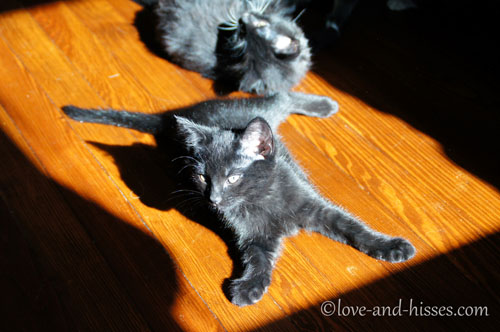 Royals video: Jareth messes with the bull (Sugarbutt) and gets the horns. 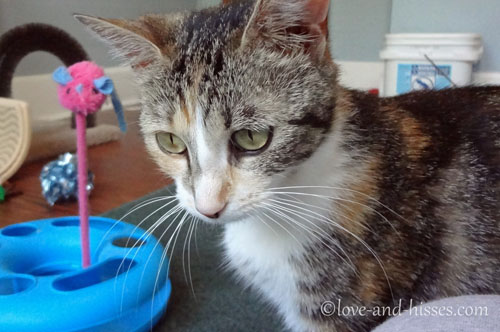 Having finished her plate of canned food, Khaleesi comes over for some petting before she goes and attends to those kittens. 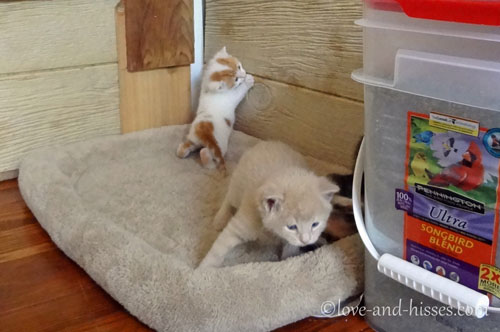 Ember’s pretty sure there’s something awesome on the other side of that barrier. 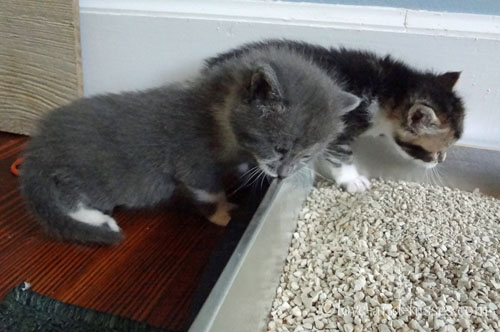 “You guys, hurry up! The buffet’s open!” 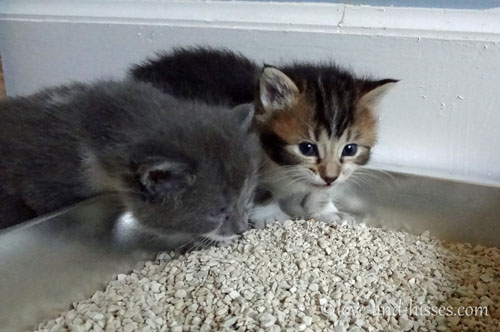 “This litter isn’t fresh like I like it. I bet this is left over. I prefer it fresh from the bag.” 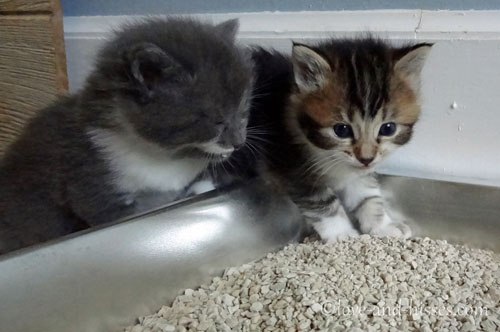 “I’m totally giving this buffet a bad review on Yelp.” 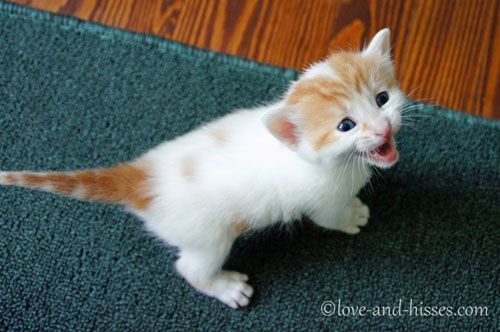 “I HAZ A COMPLAINT AND MY COMPLAINT IS THAT I AM THE GOODEST KITTEN IN THIS ROOM, I ALWAYS DO WHAT I’M TOLD, AND YOU ARE NOT APPRECIATING THAT, IS MY COMPLAINT.” 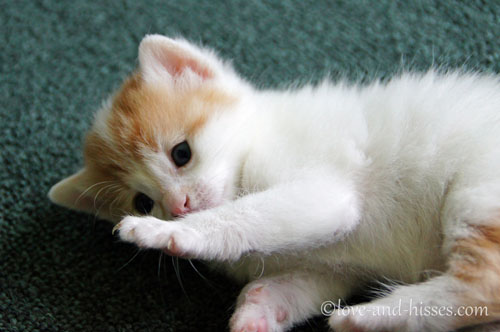 ::snik:: “Hey. HEY. There are little KNIVES coming out my toes!” 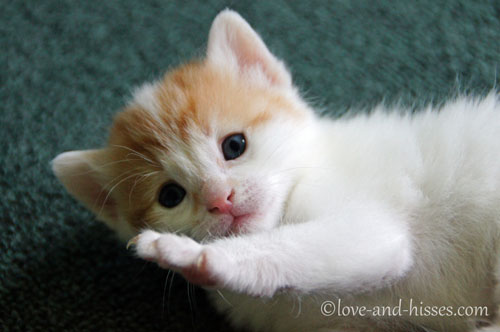 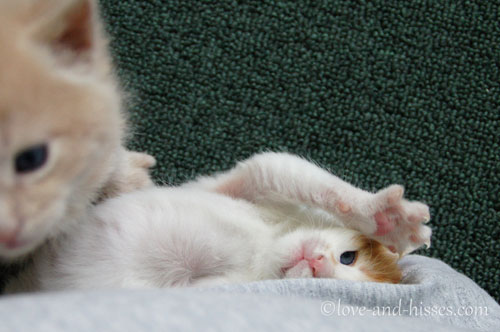 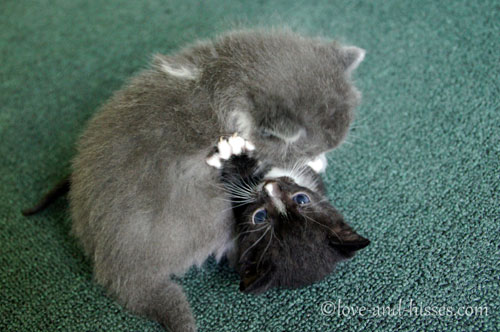 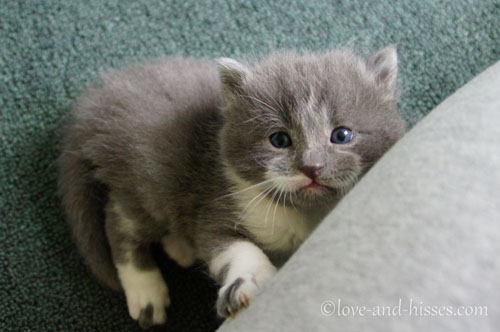 I do not recall who it was that said in a comment that Puff looks like a gray Cowardly Lion, but I cannot look at his little floofy face without thinking that and laughing. He SO does!!! 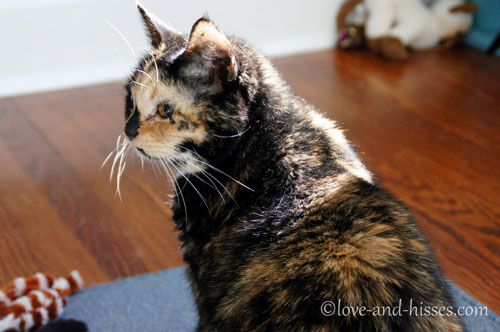 Miz Poo, checking out the foster room (she’s pretending to be interested in the toys, but she’s waiting for me to leave so she can belly up to the kitten food.)