The kittens are now 6 weeks old. I weighed them this morning, and except for River (who weighed in at 2 pounds, 2 ounces), they’re all under two pounds still. Between the fact that they’re not all two pounds yet, not quite weaned, and Zoe hasn’t completely gotten the hang of the litter box (she peed on a cat bed right in front of me yesterday!), I feel secure in saying that I’ve got at least two more weeks before I have to take them in to be spayed and neutered.

I always forget what bitey little brats they are at this age. They’re so MEAN. But at the same time they’re so freakin’ cute that I’d probably let them gnaw through my carotid artery without a fight as long as they occasionally stop and put their soft little paws on my face and sniff my nose. 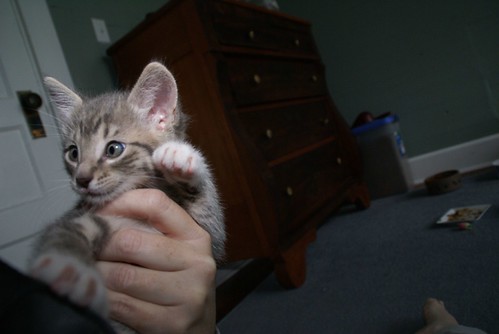 Such a little lunatic.